Have You Heard of Esther Neff?

Esther Neff is one of the secret (or not so secret, depending on who you talk to) forces in the performance art scene in Brooklyn. Neff co-founded Panoply Performance Laboratory(PPL) along with Brian McCorkle in Bushwick, Brooklyn ten years ago. PPL freely showcases unknown artists, as well as those who have a “name in the art world.” Neff manages to treat all persons with equal ease and interest, which has lead to her helping the early careers of the Push Pops, Geraldo Mercado, Ivy Castellanos, and more.

Full disclosure: she is a big reason why I have a career today. Neff is a community organizer who uses her practice to  remove barriers. Unlike the trendy curatorial set found in Chelsea, Manhattan, Neff is part of an underground art scene that shies away from the spotlight of New York Times write ups and being seen at the “right” parties. Neff even refuses to self-label as a “curator” because what that implies is inaccurate for her work; co-collaboration as her base of operation. Neff firmly adheres to the title of organizer. I personally think she may be the best performance art “curator” in Brooklyn.

I recently was able to get this shy performance art organizer to shed some light on what she sees as the future and strengths of the now booming performance art scene in Brooklyn.

AE: PPL just had a major anniversary, 10 yrs in action! Looking back what has excited you most about performance art and the arts organization?

EN: I’m most excited about collaborations; PPL’s own practice throughout the decade has been making “operas of operations” which involve short-form and durational performances with different flexible groups of people performing collective ideation. I’m also excited about collaborative organizing projects, Social Health Performance Club, No Wave Performance Task Force, Feminist Art Group, and more informal, temporary activities. In the past years of collaboratively organizing conferences and festivals and events, platforms like PERFORMANCY FORUM have evolved as artistic practices they organize in turn organize them. The intersections between art and social organizing have always been most exciting in Bushwick and in the performance art “scene” too; it seems like performance art has gotten better at understanding how modes of production and the forms of events and exhibitions themselves become sites/situations for a nurturant and socio-ethical under commons. I like how organizing gets more and more like making art in that it becomes ideologically, conceptually, and aesthetically driven. In turn, making art has become more and more like organizing, in that performance-as-art comes to involve collaboration and entire processes of making and sharing work. (Photo below by Giannakopoulou and Riléne Markopoulou)

AE: How did you become involved in performance organization? How did PPL come to be? (I know some of the answer to this but tell as much as you can/desire for readers)

EN: I guess I have always been “organizing” and that my artistic practice comes out of that more than anything; my mother is a food systems activist/organizer/writer and my dad works with parks and public land use, I began organizing as part of the community theater in my hometown when I was a teenager, went to a college in Michigan where labor organizing and social justice was core to student culture, etc, it’s really in my bones. 10 years ago in NYC though, PPL was operating more like a theater company, making devised “documentary” type work. When (co-director) Brian McCorkle and I moved into this co-operative building called Surreal Estate we were influenced by the older artists and activists living there. We began making public performances and performance art and also organizing shows for fellow performance artists and social performance makers. Surreal Estate was the first home for the PERFORMANCY FORUM platform. We were also influenced by Grace Exhibition Space (which opened in 2006) and the forms of anti-commodity and presence-focused work being made around us there and on the street. Eventually Surreal Estate was forcibly shut down and in 2012 PPL inherited the space at 104 Meserole Street as Spread Art, the previous organizers, relocated to Detroit. Around this time “Brooklyn International Performance Art F(estival/oundation)” or BIPAF started, a project to constructively critique how performance art was being organized in Brooklyn. The initial festival involved 11 spaces and over 200 artists with performances every day for a month. In many ways organizing as “BIPAF” has broadened my thinking to involve every aspect of organization in/as performance art. Over time, I have also become more and more grateful to be living in Brooklyn in relationship with so many strong organizers and artists; there is no time for nostalgia! The performance art renaissance of Brooklyn isn’t over!

AE: Where do you think performance art is headed? if anywhere?

EN: It’s interesting how so many performance artists/organizers all over the world have come to rely on certain elements of situation in order to operate for/as directly allied with performance art practices. There is agreement that de-hierarchization of the space (no stage), making sure that audiences can come and go over the course of the event, pay-what-you-can entry with $ directly to the artists, mess/nudity/participation permitted/shower available, artists less ‘curated’ than ‘collaborating’ with persons moving as fluidly as possible between witness/performer/organizer roles, practice of organizing as care taking rather than as selection, emphasis on personal relationships, and so on, are ways of defining performance art as a “discipline.” These disciplinary practices are definitively aligned with theories of Black performance (see, for example,

Thomas F. DeFrantz) and other theories in resistance and critical response to kyriarchal conditions. Not so long ago in Bushwick when there was almost no “mainstream art-world audience” (i.e. wealthy, white, manhattanite, academics etc.) for performance art, many of these valuable elements of situation emerged “organically,” in response to conditions and as part of the lives of artists and audiences, now there is quite a bit of difference between collaborative and institutional/commercial situations for performance art, artists shuttle between situations and make our own situations when we can. I think “performance art,” if it is to be defined by its forms of self-organization and direct translation of experiences and ideologies into action and forms of public event (i.e. in Black, queer, womanist ways, etc) we are heading into a lot of decisions about where ethics converge with careers and practices. It’s not inherently a “bad thing” that performance art has become more popular as a form of “high art,” rather I think there is an opportunity for performance artists to use what they do transform ways in which cultural agency operates.

AE: You and Brian are both very socially active people. How do you personally deal with prejudice in art?

EN: That’s funny, I always feel like I could be more active, I’m pretty socially anxious and shy, going out is hard. That’s why I prefer to make other people come to my house!…in terms of prejudices though as symptoms of systemic oppressions, dealing with experiences and states of human being is what performance art largely “does:” issues of bodilies, presence, interpretation, communication, identity, and self-presentation are formally inherent in live, social situations for performance as art. In terms of prejudices which exclude, I do practice exclusion against those demonstrating prejudices, which might result in not inviting someone to perform, or even asking someone to leave a situation if they are not being respectful or if they say or do harmful things. Tight communities do ostracize and expel those who threaten safety. I also do believe that organizing has to involve active work against dominant prejudices, and I try to deal with my own biases, prejudices, and values as a person in any way I can, sometimes I learn from pretty uncomfortable conflicts and arguments. In terms of a basic definition of prejudices as preconceived judgments, underlying expectations and evaluation schemas are terrifying, I work to get them out in the open, mostly through collaborating and organizing.

AE: Laaast question-   How do you handle being both a performer and organizer? Has the action of organizing become so much a part of your art practice that you cannot have intensity in one without equal intensity in the other?

EN: Thank you Ayana, that’s a HUGE compliment coming from you. My solo performance practice is pretty much on the DL unless someone invites me specifically to perform (without PPL that is). I spend my late-night and wee-morning studio time writing, making libretti/scores for collaborative performance and building objects, costumes, and really enjoy working with (partner and composer) Brian McCorkle and other collaborators on most of my projects. In many areas, there is little distinction to be made between organizing and performing and yes, this is a good way of describing it; equal intensity—it’s definitely a feedback loop of pressures and compulsions.

Artist Plans For 2016: How to do Miami Art Week Correctly as an "Outsider” 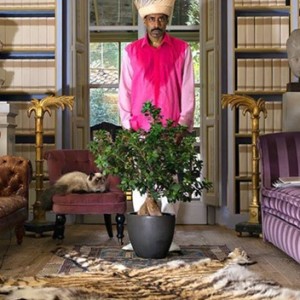 Artist Plans For 2016: How to do Miami Art Week Correctly as an "Outsider”

This year, I watched friends troop off to Miami Art Week with the sad faced realization that I wasn’t going… again. Every...