Luke Willis Thompson: The Highlight of the New Museum Triennial That You Probably Missed 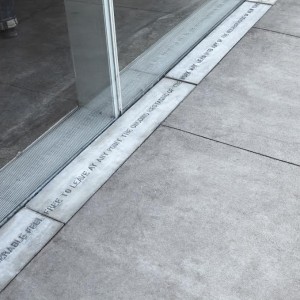 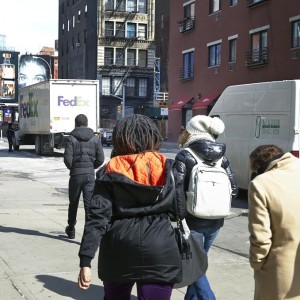 Back to work Cultbytes 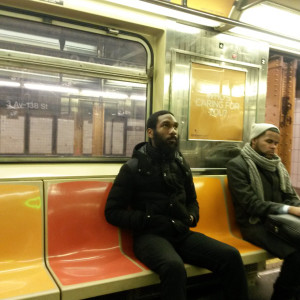 The best kept secret within the New Museum Triennial(NYC) doesn’t even occur in the museum. It is Luke Willis Thompson’s performance for this year’s triennial entitled “Eventually they introduced me to the people I immediately recognized as those who would take me out anyway,” a pursuit throughout New York that visitors are invited to participate in. The museum is just the starting point for experiencing a work of performance art that elegantly offers a timely examination of racial tensions in the US, permitted voyeurism, and the institutionalized art gaze.

Here is what the piece literally entails: As a museum visitor one is invited to follow a person on choreographed paths through the streets of NYC and into the surrounding boroughs. Each path is named after a different New York writer or artist, such as James Baldwin or Adrian Piper, but the person you pursue will not tell you this. This person will not speak to you at all.

The Performance Art Piece is Carried Out by Different Performers

On the day of the triennial press preview the performer was Justin Allen (pictured above). I joined the small group of “pursuers” who met in the lobby and were taken on a brisk walk through the east village to Union Square where we boarded the train to the Bronx.  As we walked Allen sometimes glanced back to make sure we were still with him. Coming off the train we walked to a quiet street with a pretty white church across from our ending point.  Later it was explained this end point was where David Floyd the eponymous plaintiff from the Floyd et al vs New York used to live, with his grandmother. Thompson stated that we re-walked the 5 or so minutes Floyd did as the police followed him to her front door before carrying out the frisk that motivated his action around the case.

Understanding this project requires research, time and walking. No lazy art goers are being courted here.

Even if one did not have knowledge of the Floyd et al vs New York case the act of people with enough privilege to spend the afternoon at a museum following a black man dressed in New York city, becoming both is observer and documenter will not be lost on the participant.  Other performers for this piece are: Christina Blue and Tobi Haslett.  Each performer will take his/her visitors on a different route. Moreover, as the performer changes so will the transgressions the audience associates with the act of pursuing. This is what makes this such a nuanced piece.

Personally I found myself very comfortable snapping photos of Allen as he walked and sat on the train.  He was part of my exhibition, so it was allowed. Right? It is odd how as you walk through New York for the purpose of being in an art piece you look at everything differently. Every corner we passed, every street we crossed I looked for meaning in. Where was he taking us and why?  I was in an artistic production, so I looked at the world as if it was an exhibit, without even realizing that was what I was doing. Yet as soon as Allen informed us we were at the end and promptly turned to leave us, the bubble was broken. This was an abrupt sensory ending. I instantly stopped looking at everything as as a study. I was suddenly aware that I didn’t really know where I was or what was the time. As I walked back to the train with the only person left in my group, still trailing Allen even though the piece was over, it occurred to me that I might not have even notice the beauty of the church across the street had I not been following with the eye of an art gazer rather than the eye of a hurried New Yorker (my usual point of view.)

Luke Willis Thompson’s Goal was Indeed to Disorient the Viewer

After speaking with Thompson it was clear he wanted exactly this reaction. His goal is to disorient the viewer, make him/her see the world as a “ready-made” object. In this sense he is doing the reverse of placing the ready-made object in an institutionalized space. Thompson is putting the viewer in the world and forcing him/her to look at the world as he or she would a ready-made in a museum. This is a tough task but he succeeds.

The last layer of artistic pleasure that Thompson revealed he hoped to convey was the cinematic experience of watching the back of someone’s head. He’s right it is an angle I observe all the time in movies. Yet, in my everyday travels I rarely indulge I that angle, even if I did I know I would be “staring without permission” or in New York I could garner the famous “What you lookin’ at!?” question.  “Eventually they introduced me to the people I immediately recognized as those who would take me out anyway” allows for a cinematic experience while walking down busy streets.  Just as in a movie, the viewer is not sure where the next turn will be and looks intently at the “backdrop.”

The added conversation about race relations that this work opens up is an added bonus. All too often lately I have born witness to bad “Stop Don’t Shoot” art, in response to Ferguson or other recently publicized instances of police brutality. While I strongly agree that this work is useful I also strongly believe that no matter what the subject matter is, it is the job of the artist to offer a thing of art not just political views, to engage the audience. The beauty of the work of Thompson is that it not only cleverly engages the viewer in a conversation about race and police brutality it also engages the art senses at the highest level.

Unfortunately because Thompson wants the work to remain subtle and spread through word of mouth, a lot of museum goers are missing this project.  On opening day, even visitor services seemed unclear about what the project was about and where one should stand to wait for the performance to begin. With time this has improved. My hope is that the word of mouth begins to pick up some serious traction soon. The New Museum Triennial ends May 24, 2015.  The piece is approximately one hour long however, viewers are not required to stay for the full duration. The cement marker, in front of the museum meeting spot (pictured above), makes this allowance clear.

Tell a friend to visit this project before it leaves. This performance is well worth your time.

“Eventually they introduced me to the people I immediately recognized as
those who would take me out anyway” takes
place at 11:30 a.m. and 2:30 p.m. every day that the Museum is open to the public
(Wednesday–Sunday). Museum Visitor Services can direct you to the meeting place
where the work begins. Participation in this piece requires a metro card with a minimum of two rides. 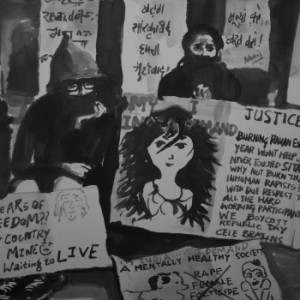 When Hong Kong International Art Fair (Art HK) launched in 2008 a debate arose on whether or not the city could sustain...