Why Scandinavian and Polish art? Because I am Swedish and I have intel. Fairs have become the main point of sales for many galleries, costly artist retrospectives and other large institutional exhibitions tour museums across the globe, and global art news is but a mouse-click away. Although the art world is increasingly international understanding factors such as geography, cultural influences, and the difference between a regional and international market are vital. Understanding these factors will help you approach an artistry in a more valuable way as well as make wiser choices for your own collecting.

The  Swedish gallery Andréhn-Schiptjenko has been a regular fixture at Art Basel Hong Kong since it’s launch. “We have noticed a fast development of the audiences knowledge base in the three years that we have participated. They are very curious and unafraid to buy art from artists unknown to them,” says gallerist Marina Schiptjenko. Unsurprisingly they had a stellar booth with regionally geared themes. They showed several oil paintings by Kristina Jansson. The largest picturing Mao hunched over a desk in a large control room was both humorous and compelling. It sold to a collector from Kowloon on Monday. I was happy to see Per B Sundberg’s fascinating, phantasmagorical and technically advanced ceramics – one, for example, depicts a baby Lao Tse figurine. They also showed pieces by Frenchman Xavier Veilhan and the German artist Uta Barth.

Andersen’s Contemporary based in Copenhagen has been doing the fair since Art HK, they showed a chair with an inbuilt pendulum system, it’s front legs slowly bouncing up and down on two balloons. Created by the Chinese artist Liu Shiyuan partially based in Denmark – not only a crowd pleaser but also an interesting insight negating the fragility and focusing on the strength of balance. A well executed mobile by the Danish artist Kirstine Roepstorff was also on view, the naked iron is unusual for Roepstorff that often works with textile and mixed-media. Berlin and Oslo based gallery Gerhardsen Gerner were showing Per Inge Bjørlo, a challenge since the established pioneer of Norwegian installation art is little known in the region Atle Gerhardsen said to me. It is part of a grander promotion scheme, as they also will be showing the artist in Berlin in May.

The Polish gallery Raster was exhibiting for the first time in the fairs Discoveries section. Discoveries is devoted to emerging contemporary artists. The gallery has not exhibited in China or Hong Kong, but they have had a pop up show in Tokyo. Sculptures by Olaf Brzeski and a series of photographs by Aneta Grzeszykowska were on view. Grzeszykowska’s series, Selfies# 1-20, photographs of modelled body parts, are a commentary on today’s selfie culture and an interesting juxtaposition between macabre and kitsch.

Recent years have seen many blue-chip galleries open off-shoots in HK, Gagosian, Pace, Lehmann Maupin, Simon Lee, Axel Vervoordt, White Cube to name a few, among the major players is Galerie Perrotin. At Friday’s VIP opening the booth was buzzing, the gallery staff flown in from Paris and New York were on their toes. A Frenchmen on the phone said “I think we are competing about discounts” when I walked through the booth. One of the pieces fawned over (on hold unless a higher price was offered) was a glazed stoneware piece by Swedish artist Klara Kristalova. Other work by Scandinavian artists up for grabs was a Karin Mamma Andersson painting at David Zwirner and London based Atlas Gallery had several analog multi-exposure photographs by Finnish artist Niko Luoma. The pieces are printed in Tallinn.

Skarstedt is based in London and New York but the gallerist Per Skarstedt is after all Swedish. The amazing Cady Noland mixed media work from 1986 and Cindy Sherman Film still that he brought to the fair are well worth a mention. Both fetched high prices. 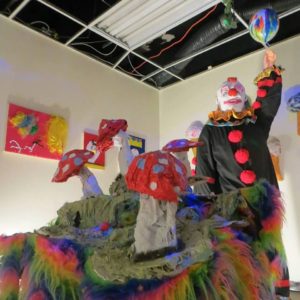 Last year, I was completely OBSESSED with the Spring Break Art Show. From the concept (a curator based fair!), to the opening...