It turns out I never really understood Sterling Ruby. Because the characteristic stalagmite sculpture is so otherworldly, I kind of just imagined a white-blond German and/or an alien creating blood-drip works in some kind of Hugo-Boss-meets-Martian form of self-expression. That was apparently incorrect.

Pillars, now on view, conjure up images of a crazy albino German man slashing blood around. That is not accurate. All images courtesy of Hauser & Wirth.

Although he was born in Germany, it seems instead that Sterling Ruby, whose work in on view in SUNRISE SUNSET at Hauser & Wirth’s 18th street space through July 25th, references urban subculture. No, not Fiddler on the Roof (do not be deceived by the catchy title, although the artist was raised in Amish country…), but graffiti, gang violence, and prison.

Here’s a gem from the oh-so-esoteric press release: “Ruby’s work, which encompasses nearly every medium, voraciously cycles through the autobiographical, the art historical, and the sociological, creating layers of reciprocal influence that radiate outward. Ruby exploits tensions within aesthetic and societal systems, recreating and drawing our attention to repressive and liberated states.”

While the title is allegedly indicative of otherworldly celestial bodies (ok, so maybe my Martian interpretation wasn’t totally wrong) the theme is also clearly evidenced in the works on view. Highlights include a new spraypaint diptych, SP272 (2014). The green and pink sprays are smeared with smoky black, acting visually as horizons, and metaphorically as the juxtaposition of opposing forces.

The choice of spraypaint is also relevant, as referential to the social commentary of graffiti and street art as urban monuments. Biographically speaking, Sterling Ruby lives and works in Los Angeles, having been raised in Lancaster County, Pennsylvania, born on an American military base in Germany, and shown across Europe, Asia, and the United States.

The exhibition runs through July 25th. 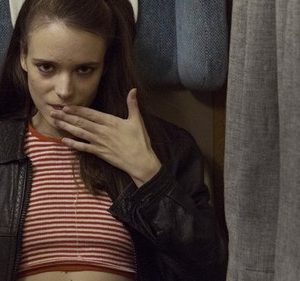 If there ever were a good set of bed partners in film it would be Trouble Every Day by Claire Denis, Nymphomaniac I-II by Lars...