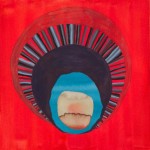 The Neverending Book is an ongoing (neverending!) series of water-based media, collage and text on ca 34×31 cm paper that Sörenson began working on in 2010. The series explores painting as medium and each piece becomes a recording of a moment of the human psyche captured. In a group they figure as the recording of a full or partial spectre of the human condition; emotions such as anger, melancholia, happiness and guilt are portrayed all sparked from real-time events in the artists life. I have a piece titled Nu när jag tänker på det blir jag förbannad. (“Now that I think about it it makes me angry.”) concieved when Sörenson was thinking about in-equality between the sexes, the gender issue. Sörenson, with a BFA from Umeå University and an MFA from Pratt, lives between New York and Stockholm. She works over several medias and is currently in Brussels completing a.pass, a post-masters program in performance art.

Sörenson works in the spirit of Fluxus, as a visual and conceptual aesthetic. She works with everyday themes and objects,  often exploring hierarchical structures in projects that span over long time. Genuine Government Issue is an on-going series of audience participation based performances exploring the bureaucratic format and practice of border control. An off-shot collaborative performance project is Department of Porridge / Porridge Society created with Rares Craiut, where applicants were invited for a porridge dinner. The American fluxus artist Allison Knowles is in her early eighties and still performs the seminal “Make a Salad” together with her daughter Jennifer Higgins, it was first performed in London at Institute of Contemporary Art in 1962.

Sörenson is definitely an artist to keep an eye on and, like Allison Knowles, she will be forward thinking and keep her projects alive over long time (ie. snagging a piece from the Neverending Book is a good investment!).