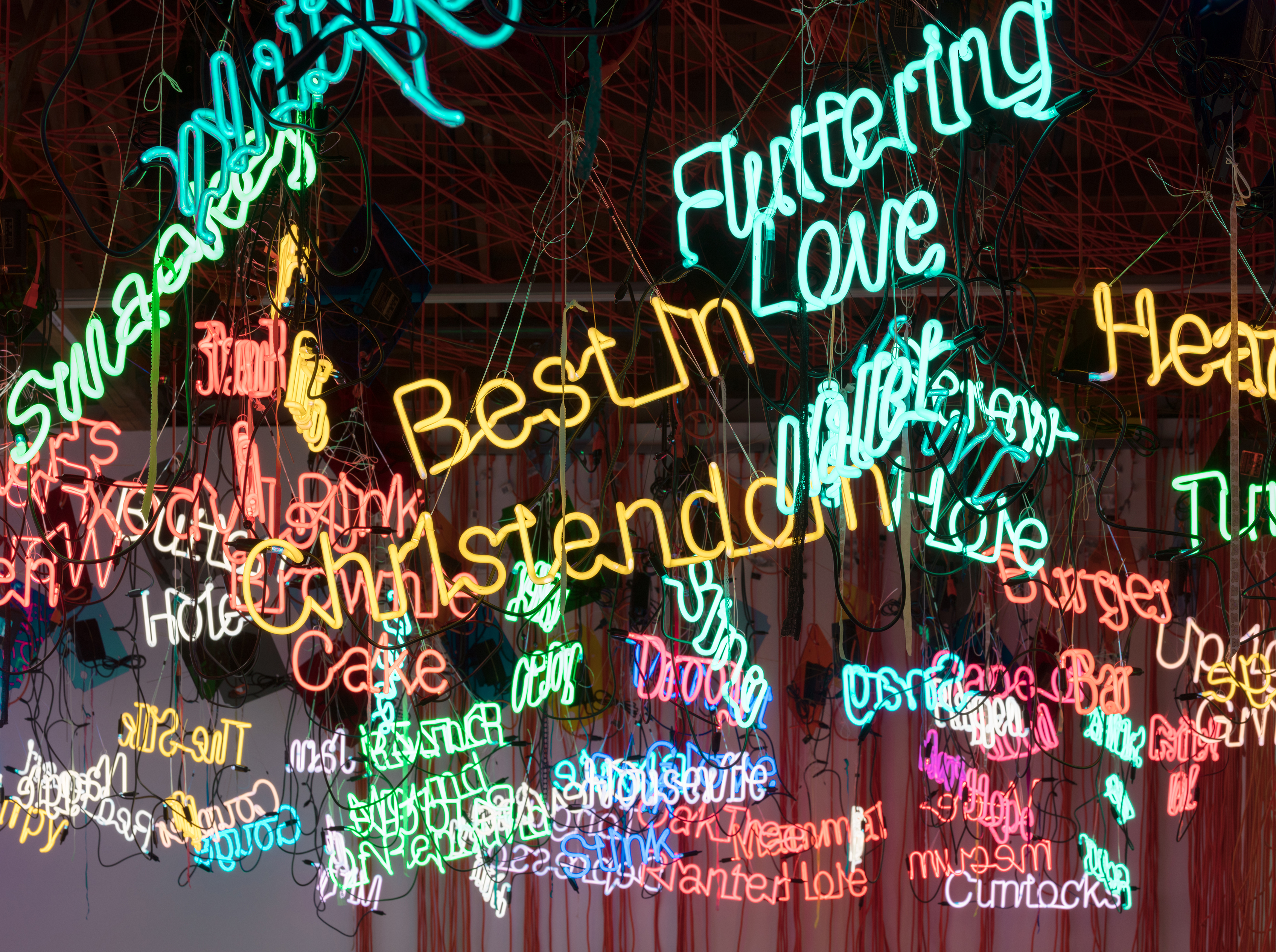 Since its opening in March of 2016, the Los Angeles branch of the Swiss blue-chip gallery Hauser & Wirth has established itself as a commanding presence in the ever-growing LA art scene.The gallery is made up of a collection of late 19th and early 20th century industrial buildings in the Arts District. Partnering with well-known curator Paul Schimmel, and thus adopting the name of Hauser Wirth & Schimmel, the gallery set itself apart from similar commercial galleries by embracing the museum-background of its co-partner and including curated shows and a strong education program. With attendance reaching 160,000 visitors in their first year, Hauser & Wirth Los Angeles l shows no sign of letting up. The gallery’s newest show on the art of Jason Rhoades opened to overwhelming popularity on February 18th with 5,000 visitors on opening night alone.

In the exhibition titled simply “Installations 1994-2006,” Hauser & Wirth Los Angeles presents a comprehensive survey of the work of Jason Rhoades. Comprised of 6 installations that span over 28,000 square feet, as well as archival video footage from The Estate of Jason Rhoades, the exhibition traces the evolution of the artist’s work and celebrates his often shocking push against cultural conventions. 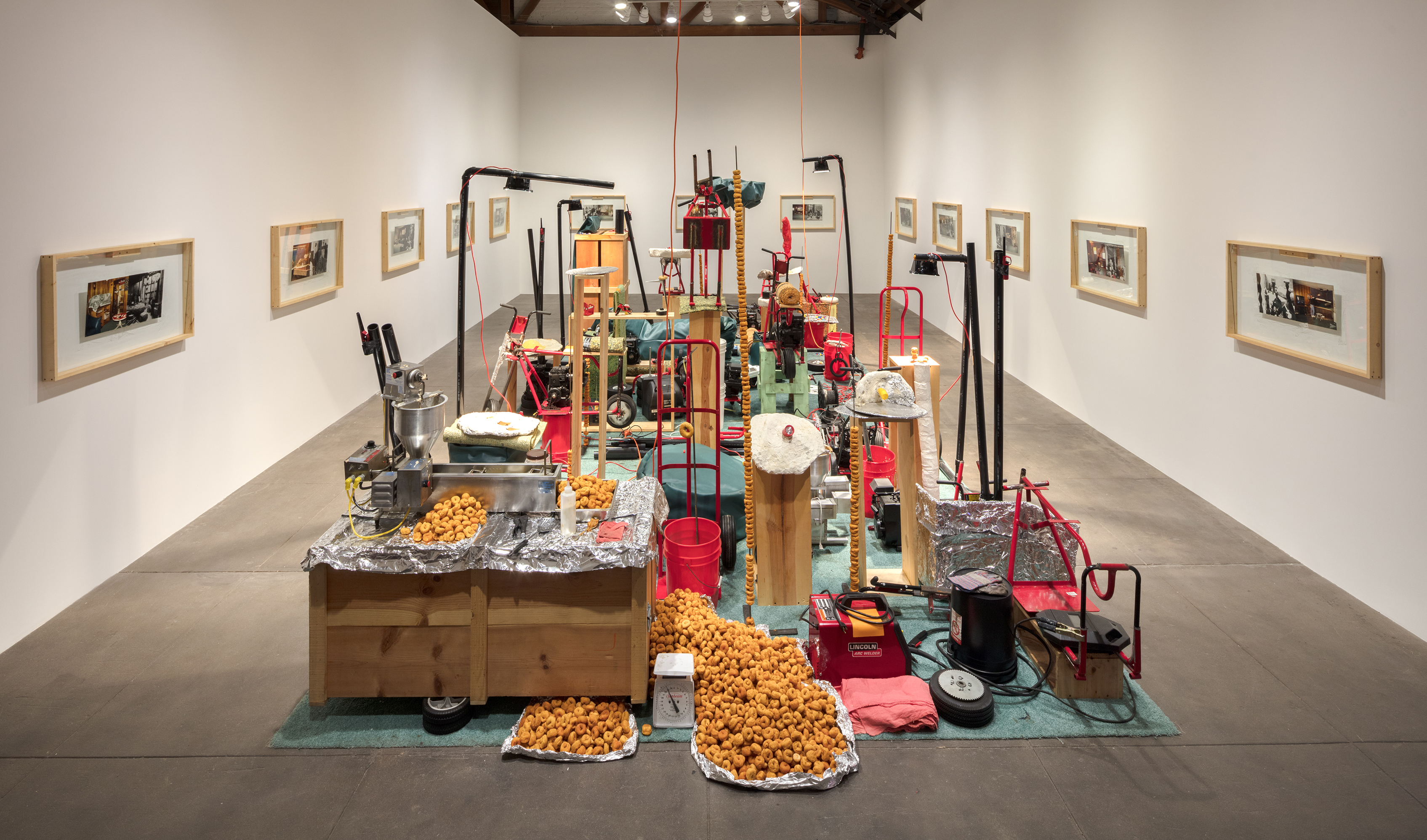 Organized loosely chronologically, the show begins with two early works—“Swedish Erotica and Fiero Parts” (1994) and “My Brother/Brancuzi” (1995). The first consists of an assemblage of yellow items related to construction. Cardboard, legal pads, scrap wood, and mixing buckets spread throughout the room. Next door with “My Brother/Brancuzi,” Rhoades continued the same exploration of everyday objects, readymades, and construction materials. In this piece, however, he included stacks of donuts and disassembled mechanical objects. Surrounding the objects are photographs of two specific rooms—his brother’s bedroom and the studio of famous artist Constantin Brancusi. Paying homage to the great artist while also celebrating the mundane existence in suburban America, the piece exhibits Rhoades’ early move towards stronger messages of subversion and sculpture as personal exploration. 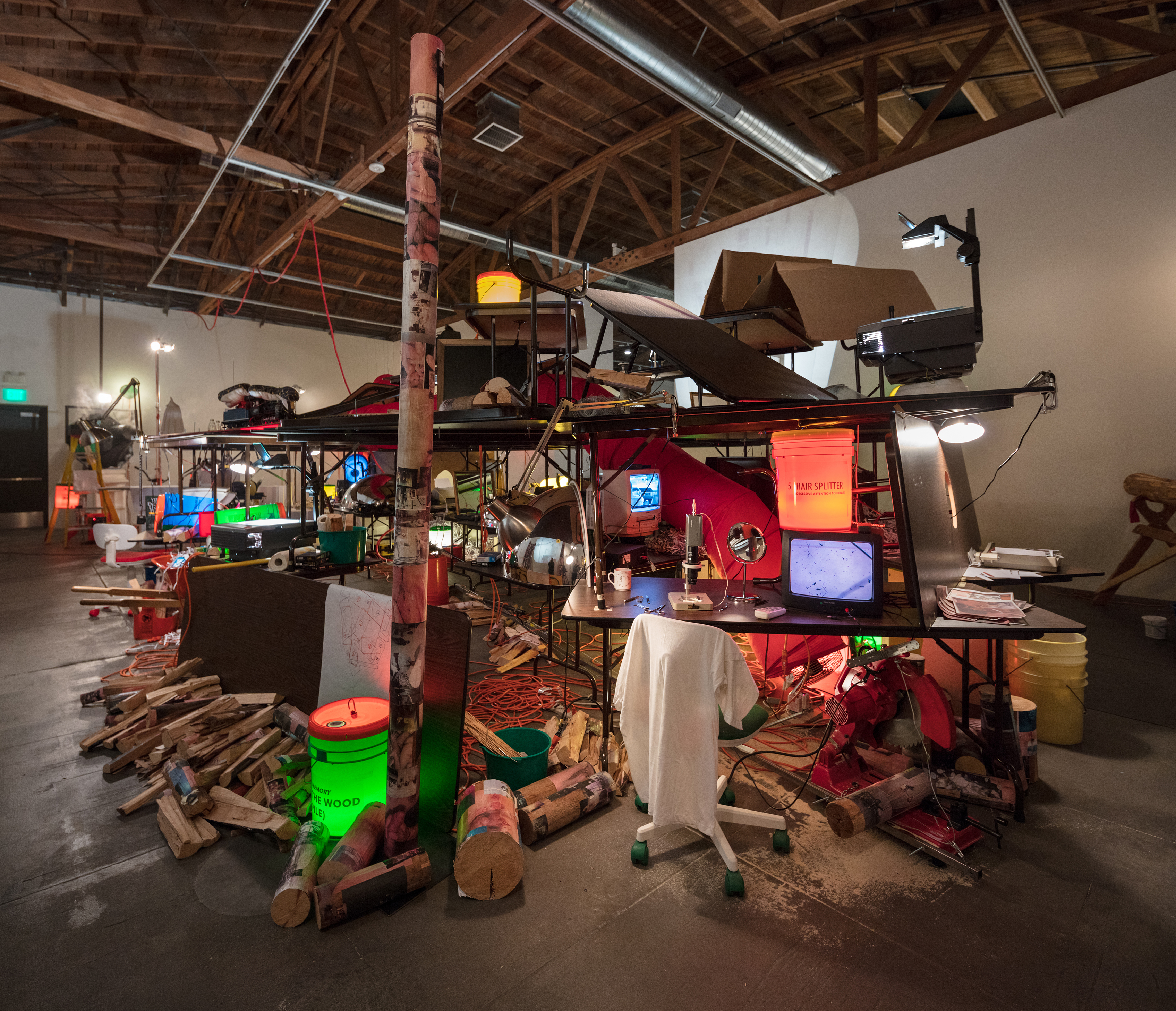 In the next two rooms, Rhoades considers the balance between superficiality and meaning with subversive content and hidden messages. Arranged like small worlds with piles of objects that the viewer carefully navigates through narrow pathways, Rhoades’ self-exploration becomes boldly apparent. In “The Creation Myth” (1998), the artist breaks down the myth of Man as Creator through an understanding of Creationist and Evolutionist thoughts. With no room to diverge from the path, the viewer is taken on a journey through notions of the brain and the body metaphorically portrayed with objects and images of pornography. There is a strong personal element to the work that verges on isolating. 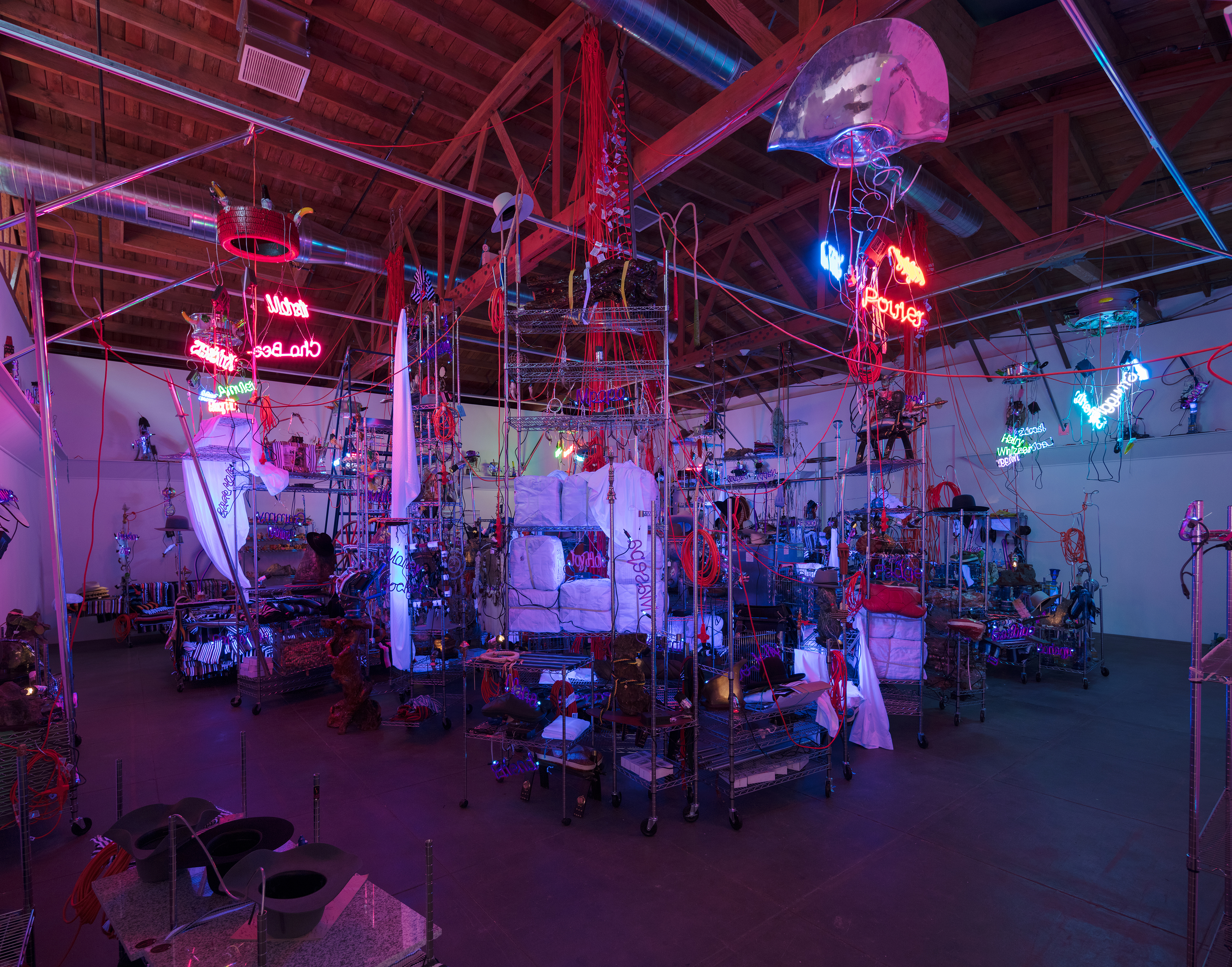 In a similar arrangement of mountains of objects entitled “The Black Pussy…and the Pagan Idol Workshop” (2005), Rhoades explored the boundaries between religion and commerce. The installation focuses on the ancient pre-Islamic story of the Kaaba and includes items such as dream catchers purchased on eBay, ancient Chinese scholar stones known as gongshi stones, hookah pipes, beaver-felt cowboy hats, and ultraviolet neon signs with ‘pussy words’—slang for female genitalia. 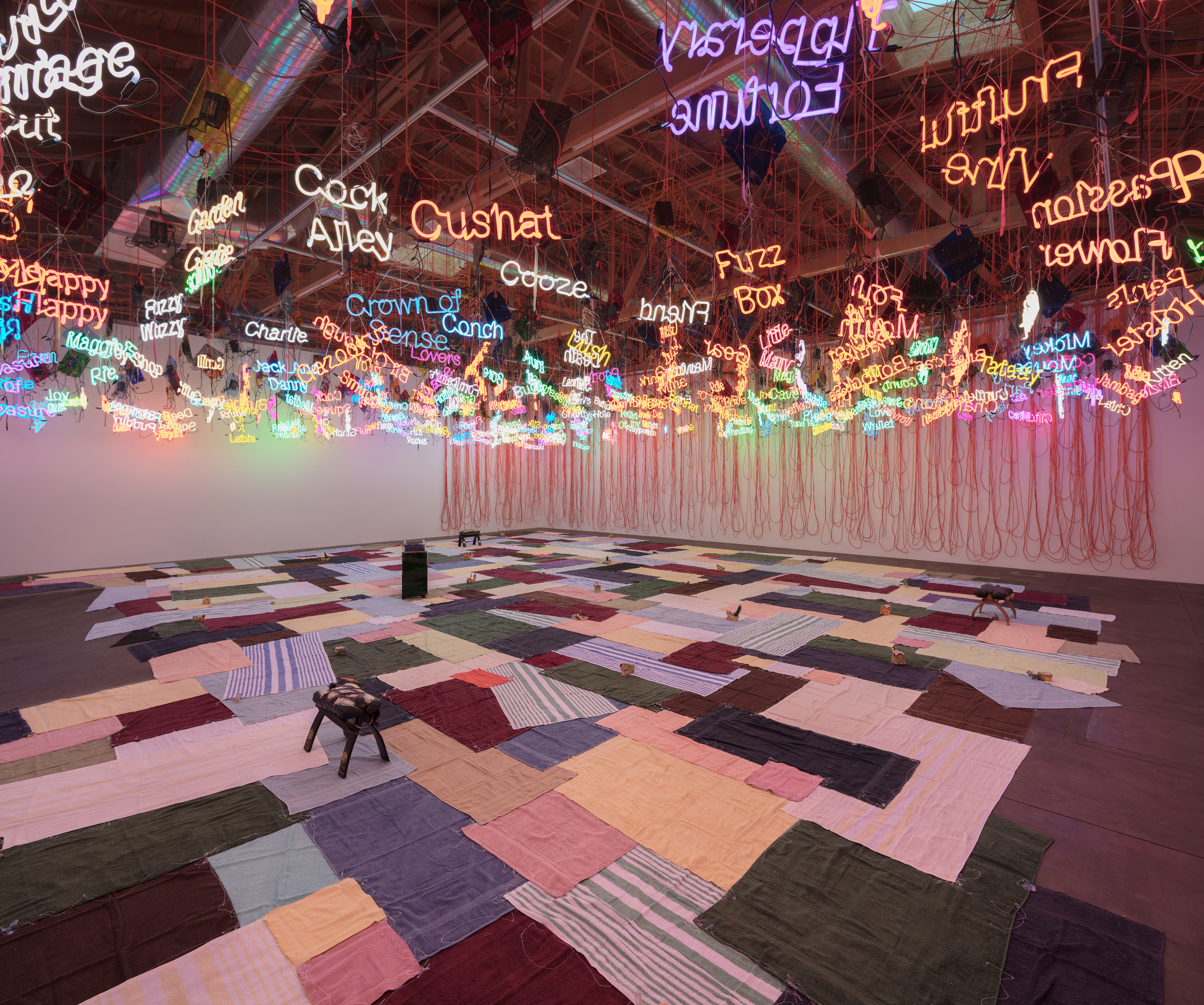 A strong shift away from the narrow pathways and ceiling-high piles of objects, “My Madinah. In pursuit of my ermitage…” (2004) invites the viewer to wander the towels that spread across the mosque-like room at any pace and in any direction. Though less frenetic and offering a brief respite from the sensory-overload of the other rooms, the piece boasts Rhoades’ unwavering push against political correctness and cultural conventions with the sea of 240 ‘pussy word’ neon signs that hang from the ceiling. Reminiscent of mosque lamps or stained glass windows, the warm glow of the signs welcomes the viewer while the content reveals Rhoades’ interest in contemporary urban language. 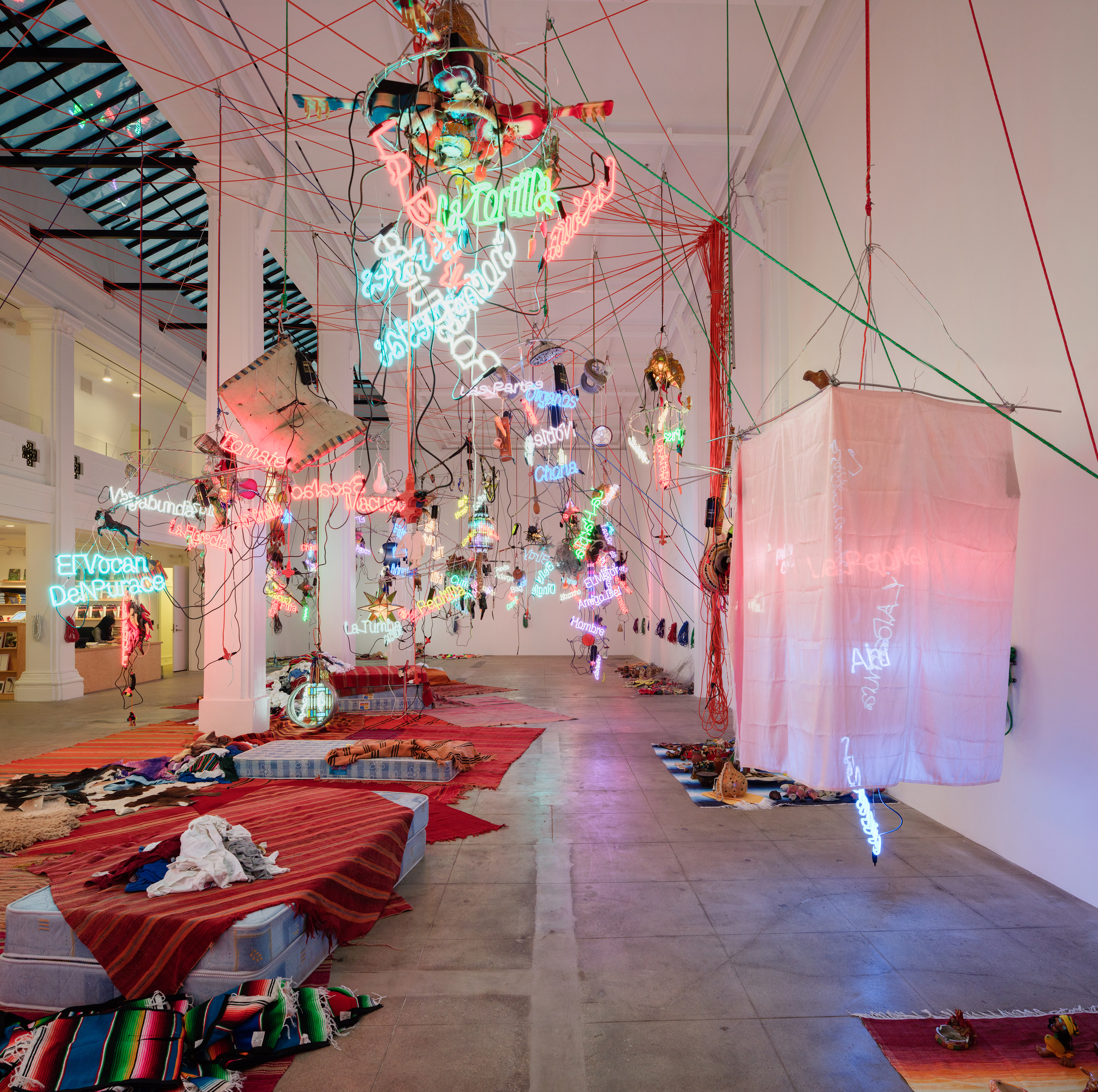 In the final, newest installation, “Tijuanatanjierchandelier” (2006), Rhoades considered the impact of tourism on two different border towns—Tijuana, Mexico and Tangier, Morocco.  Spread throughout the large room are trinkets and souvenirs on rugs and mattresses arranged in small displays underneath a network of chandeliers, Moroccan lights, and 176 Spanish and English ‘pussy words.’ Highlighting the class and culture clashes that occur in these border towns, the artist included nearly identical objects from the two disparate cities to show the lack of cultural significance of these material goods and the increase in production of such meaningless objects for foreign consumption. Exploring stereotypes, cultural misconceptions, and the tense relationship between tourists and locals, Rhoades’ piece, though over a decade old, is still incredibly timely and relevant today.

It is easy to view Rhoades’ works as disorganized clutter, but the lights, trinkets, and piles of everyday objects that make up his installations are all purposefully placed and each have their own individual role within the whole. Much like a Rube Goldberg machine, the parts weave in and out of each other in a continuous loop. On the Friday afternoon when I saw the show, there was only a handful of other people, which the gallery staff noted was pleasantly rare and a stark contrast to the teeming crowds of 1,000 to 2,800 visitors they have lining up on the weekends. Like moths, it seemed that some visitors were drawn to the neon signs and brightly colored sea of objects to take selfies and photos for their social media feeds. Others were diehard Rhoades fans eager to see the long-overdue survey of the unconventional, brazen artist. It was hard for me to imagine maneuvering through the space with anything more than the small crowd I was with. Even as I carefully picked my way through the installations, I feared bumping into or stepping on the various parts that dangled in the path and spilled out onto the floor.

While the exhibition was organized by Paul Schimmel, the status of his relationship with the gallery is unclear. As a founding partner and vice president, Schimmel joined the Hauser & Wirth team in 2013. Despite the three years of preparation it took to open the gallery, Schimmel announced in late February that he was leaving. There have been no official statements regarding the split nor was the gallery staff willing to comment when Cultbytes reached out. But, the Hauser Wirth & Schimmel website has been quietly changed to Hauser & Wirth Los Angeles, and the relationship with Schimmel that was once celebrated in their marketing has been removed. Known for his groundbreaking and blockbuster exhibitions, as well as his strong support of young and local artists, Schimmel is unlikely to be out of work for long.

Museums have long offered their visitors the opportunity to dine, will larger galleries be following suit? Manuela, led by chef Wes Whitsell is located adjacent to Hauser & Wirth’s courtyard. Embracing the Southern Californian indoor/outdoor vibe the restaurant is both modern and rustic with it’s steel beams, bistro tables, Thonet chairs, and brass accents. The restaurant celebrates locally sourced ingredients, they even have their own herb garden and chicken coup. This new curated art and dining combination makes the gallery doubly attractive.