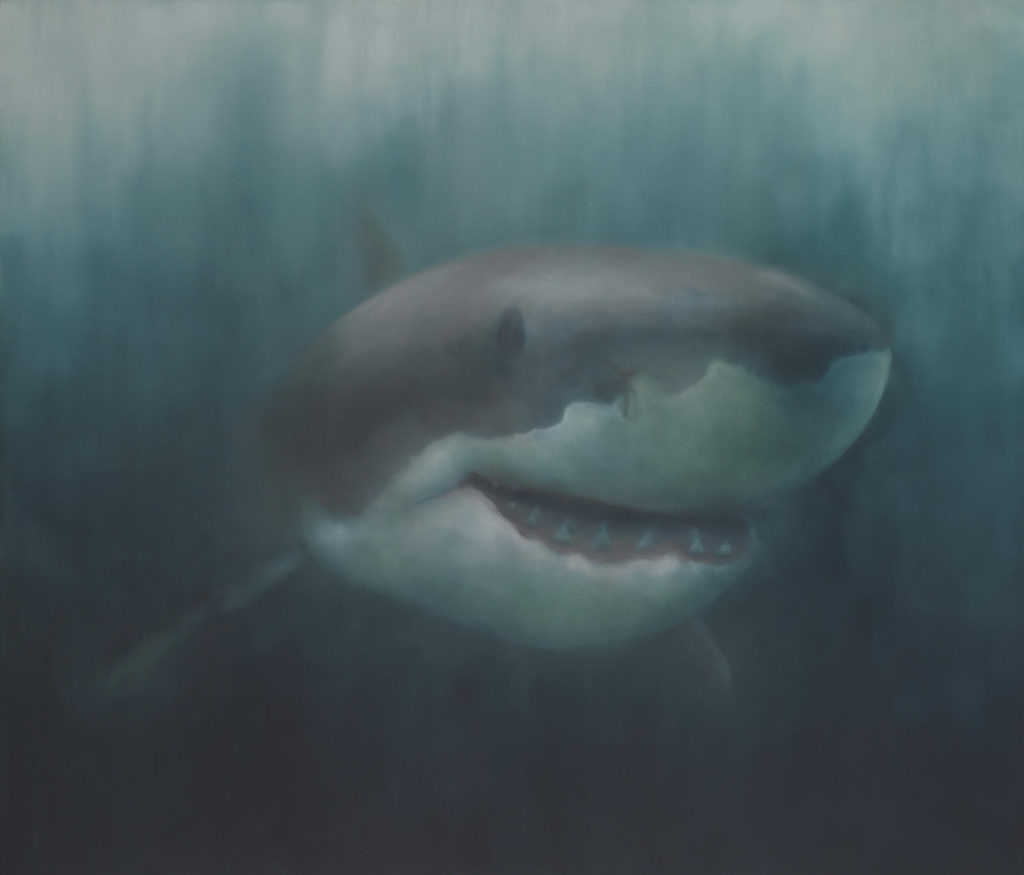 It’s not everyday that I find myself face-to-face with a 9-foot long shark in Venice, California, but that is exactly what happened when I had the chance to visit artist Natalie Arnoldi’s studio. The shark in question was, thankfully, one of Arnoldi’s incredibly life-like and hauntingly serene shark paintings. I had the pleasure of spending the afternoon with Arnoldi, talking about her ocean-related paintings, as well as her newest series that depicts historical images of German concentration camps. Her story as an artist is tied to her ‘day-job’ as a marine biologist, and the subjects of her work fit into larger discussions of climate change and collective memory.

Arnoldi grew up surrounded by art and the ocean. Her father, the renowned painter Charles Arnoldi, is one of the original Venice contemporary artists and still continues to make his large, colorful abstract works in the studio he shares, in part, with his daughter. Following her father’s lead, Arnoldi began painting seriously in her first years of college at Stanford University, where she studied marine biology and later completed a Master’s degree in Earth Systems with a specialty in Ocean Science and Policy. A Malibu native, her love of and concern for the environment is deep-seated. She explained this connection, between her academic studies and art practice, as “a spring board that starts a dialogue, which always culminates in a discussion of human interactions with great white sharks.” 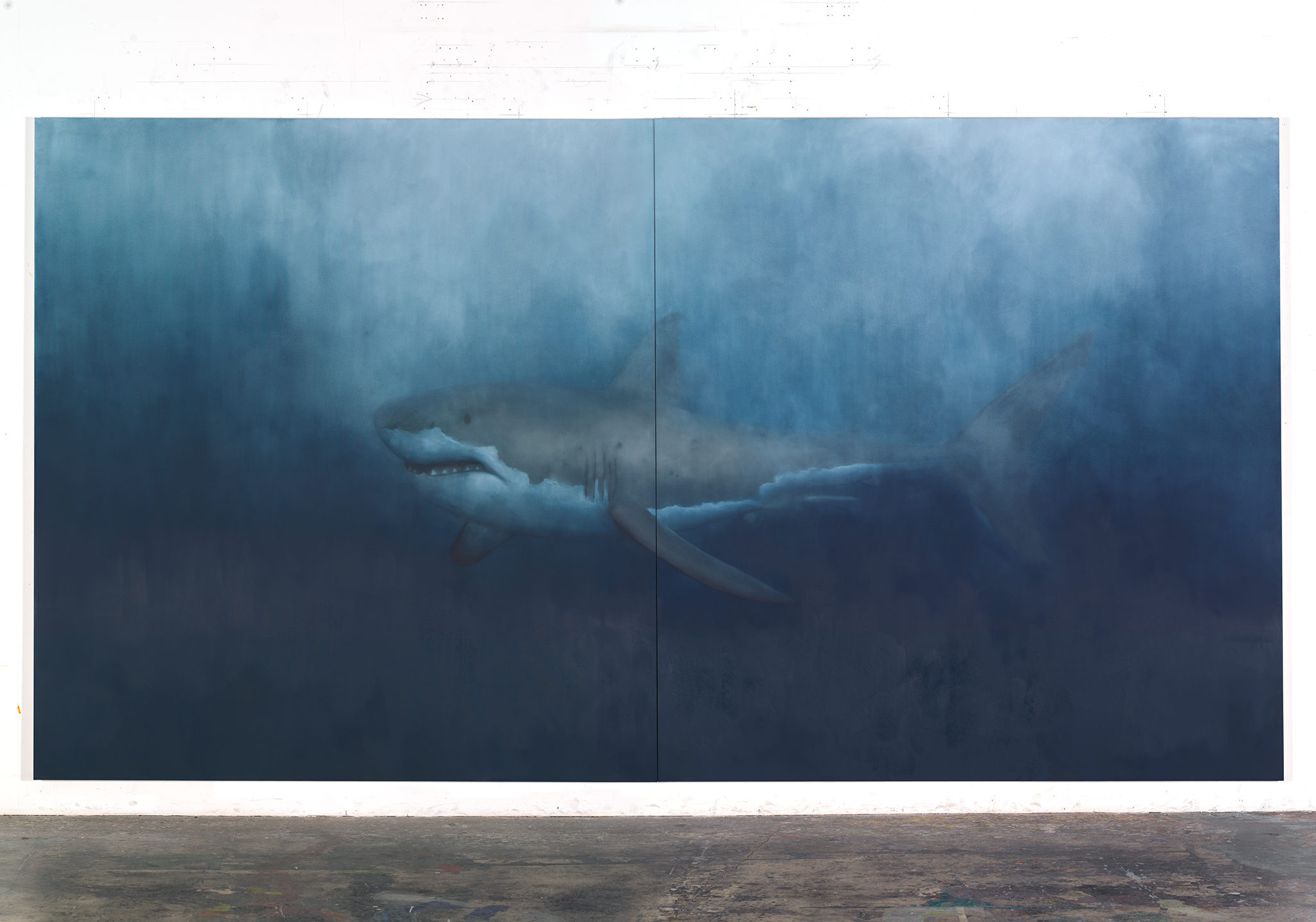 In her shark paintings, Arnoldi works from images of the actual sharks she has seen on research trips. In addition to painting she, together with a team of scientists, works with tagging and tracking sharks off the coast of Monterey. Her paintings are often named after sharks she has spent a long time studying. Her experience of working with, or perhaps disrupting, the ocean permeates her painting practice, she explained: “I studied marine biology and continue to work in the field, and it is virtually impossible to study any aspect of the environment without studying some impact of climate change, conservation issues are something I think a lot about. I have struggled with how to explicitly incorporate this narrative into my work, but have found that it often creeps in an almost subconscious way.”

This subconscious element is remarkably apparent in her work. There is something incredibly Caravaggesque about Arnoldi’s paintings. Caravaggio painted moments that appear to have just unfolded. The viewer risks missing a fleeting glance, a candid smirk, or a vengeful act if he or she were to look away. In Arnoldi’s paintings, there exists this same sense of witnessing the climax of a moment that is threatening to disappear as quickly as it had arrived. In her shark works in particular, it seems as if the viewer has interrupted a private moment in which the shark appears out of nowhere. The viewer has entered the shark’s world in Natalie’s works. We have no place there and we are left entirely alone with this huge, powerful creature.

However, Arnoldi does not exaggerate the potential for violence that she so easily could with these sharks. Rather, she presents the animals in their most natural state, a state that very few people get to see. For Arnoldi, this sensitivity towards the power of her subjects “encapsulates the unique way that fine arts can act as a conduit for conservation communication- by engaging audiences that otherwise might not encounter certain environmental issues.” 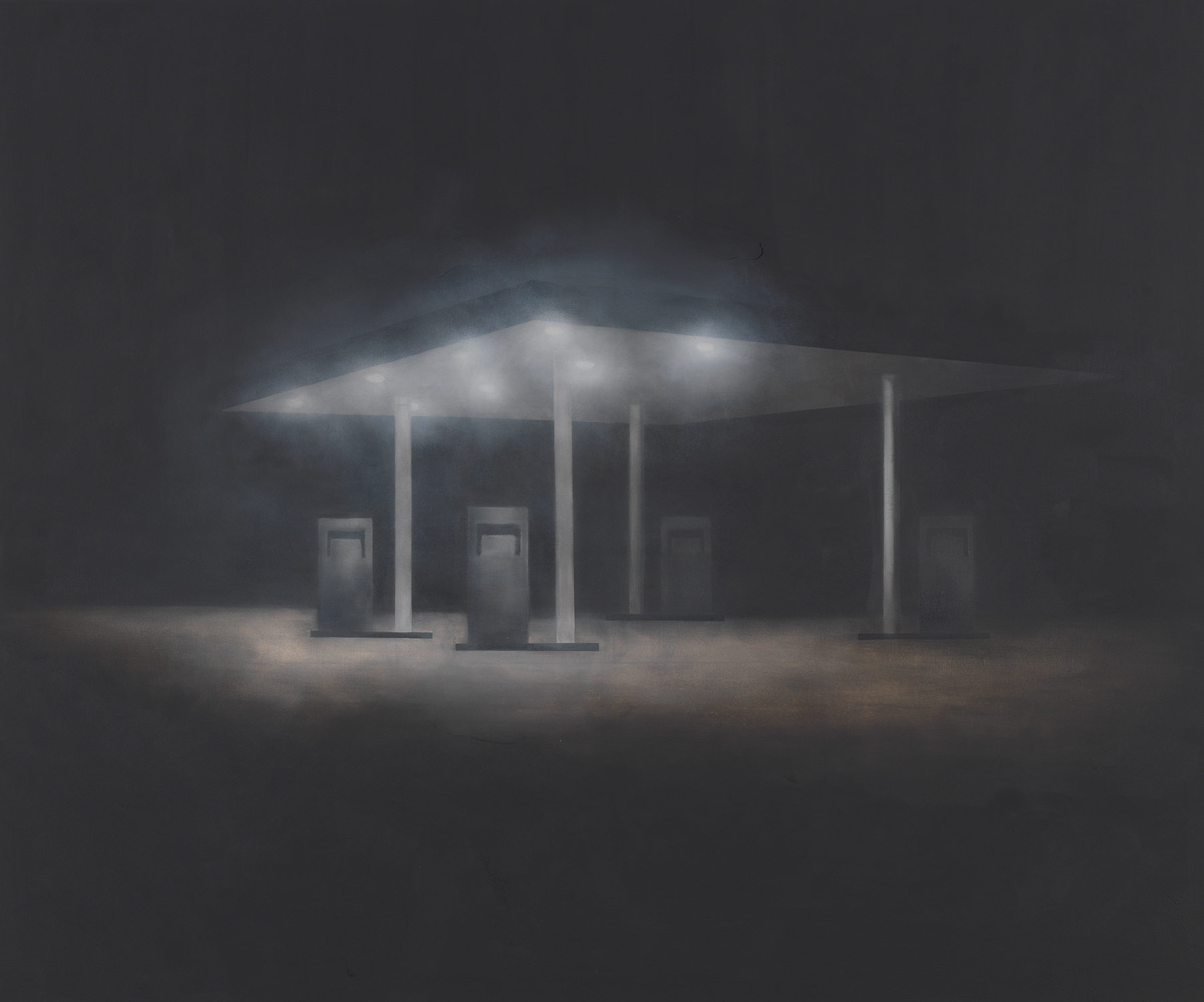 In addition to her monumental shark paintings, Arnoldi is known for her images of places. In these works, her subjects are based on reality in that they are taken from objects and moments that exist, but they are ambiguous and lack specificity so that the viewer is able to relate based on simply having witnessed similar scenes.

This ambiguity is what makes Arnoldi’s works so memorable. “Painting ‘places’ (gas stations, roads, airports, piers), has also been a thematic element in my work, but they have always been anonymous settings in which there is a strong implied narrative, but an ambiguous one. I find this to be an effective method for engaging a viewer—give them enough information to put them in a time and place, but make it ambiguous enough that you have to fill in a personal narrative to complete the imagery,” she says. Her works are relatable and play upon the viewers’ collective memory. 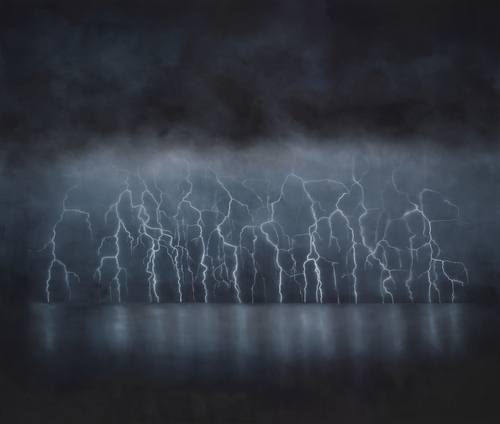 Without a specific narrative or back-story, the viewer is able to relate Arnoldi’s scenes to moments in his or her own life and add in the factors that led to these remarkable images. For me, I relate closest to Arnoldi’s lightning paintings. While the idea for these works came from a specific moment in which the artist saw a magnificent lightning storm in Baja, California, the paintings speak to anyone who has seen a similarly impressive show of nature’s power. 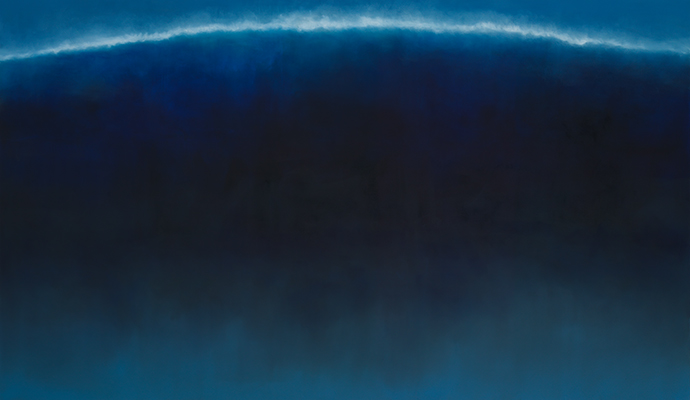 The same sense of captivation with and awe of nature is also present in Arnoldi’s images of waves. I couldn’t help but think of Robert Longo’s works of the same subject. Indeed, the parallels between the two artists became more apparent as I explored Arnoldi’s work. The starkness, minimal layers, and overall color schemes are remarkably similar. Moreover, the two artists’ abilities to freeze moments of high potential for movement and energy are incredible. 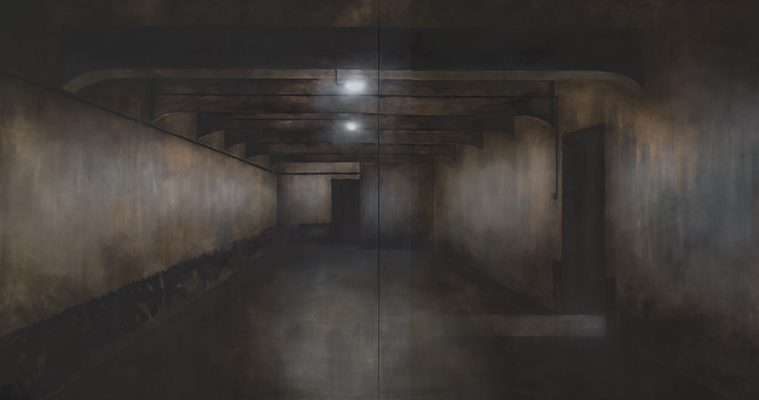 In her newest works, Arnoldi has shifted to painting from historical photographs of German concentration camps. So far she has completed two of these monumental Holocaust pieces and is working on a third. The largest of the two features an image of the showers at Auschwitz. The title, “January 27,” refers to the day in 1945 when the camp was liberated. The second in the series is of Dachau and is titled “April 29,” again referencing the historic day in 1945 that the concentration camp was finally liberated.

The artist explained this new series: “I have been thinking for a long time about how to make paintings that engage more directly with social and political issues. Atmosphere and subtlety have always been themes in my work, and so how to create a highly evocative image with very minimal information is also something that, as an artist, I find quite intriguing. The culmination of these two concepts is the idea of creating paintings of highly charged spaces where atrocities have occurred. The holocaust paintings are an attempt to engage a viewer on a visceral and emotional level with a historical narrative.”

To achieve this highly charged space, Arnoldi portrays her images as stark and foreboding, but with few details to orient the viewer. She does not provide a time or place for these images. There is no explanation of how we got to these stark rooms, just an unapologetic, incredibly direct presentation of the subject at hand. The viewer does not know when the images are from and may not even know where they are from, but will certainly recognize the overwhelming sense of darkness and coldness, and the eerie potential for action and, in this case, for suffering. 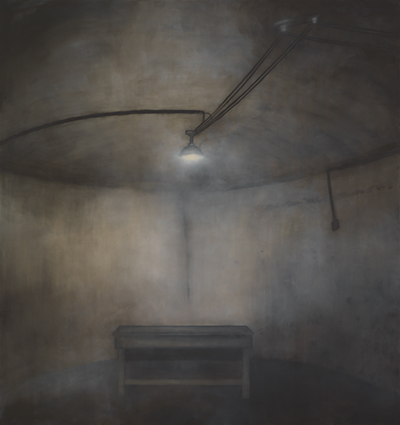 In discussing these new works, Arnoldi introduced the notion of empathy versus sympathy: “This idea of empathy vs. sympathy is part of what motivated me to create the holocaust paintings as spaces, rather than images of people suffering. It is easy to feel sad and horrified by what was happening in Europe 70 years ago (in short, sympathy), but to really feel the gravity of what happened and understand the implications about human nature, you have to put your self into another time and space (empathy). That can be very difficult to do. In recreating these places in paintings, my hope is to put you in that time a place, where you viscerally feel what occurred there. This is in part why the paintings are so large- to emulate the experience of walking into these rooms.” The resulting works elicit a truly physical and emotional reaction.

Arnoldi sheds light on these grave images as a reminder of man’s potential for violence and suffering. While this shift might seem like a sharp departure from her earlier pieces, there are larger themes of collective memory and the interaction of man in nature that connect Natalie’s works. Indeed, the Holocaust images strike me as a reminder of the fragile state of humanity in much the same way as do Natalie’s explorations of nature and environmental phenomena.

At only 26, the scale and gravity of Arnoldi’s works are bold and impressive. As climate change progresses and environmental issues develop, representations of nature’s power will become increasingly important as visual tools for the larger issues facing society. It will be interesting to see how Arnoldi’s work evolves both in her studio and out in the ocean.