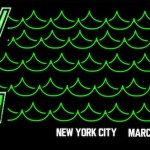 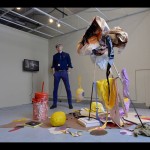 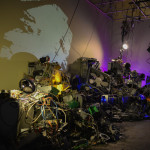 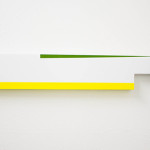 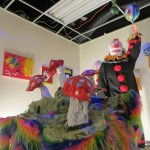 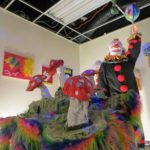 Last year, I was completely OBSESSED with the Spring Break Art Show. From the concept (a curator based fair!), to the opening (more party than stuffy art event), to the actual art (site Amani Olu’s lie detector performance for example), I was sold. This year the fair moved from the abandoned school on Mott Street in Nolita to the Moynihan Station post office on 31st Street in Midtown. With the move to midtown on a snowy day, the glutton of beautiful downtown people seemed to be considerably lessened on opening night this year. Maybe a blogger station, much like what Project hosts for fashion fairs, would have helped off-set this? Or possibly a PR stunt featuring several surprise performances that just “happened” to leak to the press could have turned things around? However, the party is not what is most important here. This is about the contemporary curator(s) and his/her art of choice.

There are now more than 80 curators in the Spring Break Art Show.  It has really grown. This is brave, but the growing pains are obvious.  Most noted, the organizers did not curate the curators well enough. They left out a few key players who would have shaken things up a bit. (See list below.) The theme of TRANSACTION was often taken too a literally, with the re-occurrence of money in art installations throughout the show and a ticket based money system in place that no one was into. (Sidebar: The photo booth should always be free on opening/preview night.)  The show’s hipster art seemed to hit one note this year. Most of it was messy and there were not enough exclamation points visually.  Then there was the problem the organizers had no control over, the problem of the dark hallways, which the Post Office did not allow organizers to alter. There were lots of spacious hallways an unexpected stairwells with no art or music in them because the PO said no to that.  How sad… and STILL, with all that went wrong, there are some stand out stars, who are worth making the trek in the cold to see:

1. Akiko Ichikawa’s “BAD KANJI”  in Room in 4100 where patrons can choose to have a “negative” Japanese character painted onto them in gold for free or buy a ticket to pay to have a a character from the positive list painted onto the body area of their choice. What’s interesting here is that because the list of “negatives” is free one if likely to analyze that list for the best of the “negatives,” ultimately, choosing the character that under normal circumstances would be overlooked.  Needless to say this makes for a fun hang out station that brings to mind cultural accuracy, currency worth, and what is deserving of the label “bad.” Happening: 3:00 ~ 8:00 pm on Saturday 3/7 and 12:30 ~ 5:00 pm on Sunday 3/8.

2. Peter Gynd’s “Form and Formless” in Rooms  4011 & 4013 features the work of performance/installation artist, Katya Grokhovsky and installation artist, Taezoo Park. Gynd “set out to create a dialogue between the architecture, the artworks and the exhibitions visitors.”Park’s pile of electronics is seduces the viewer while Grokhovsky’s feminist installations are engaging and Disorienting simultaneously.  Her performance “Slow Dance with Me” was my favorite “transaction” at Spring Break. Grokhovsky and two other performers offered free slow dances to the audience and wore t-shirts to advertise the offering.  Katya Grokhovsky will be performing another work “Status Update” 4-7pm Saturday in rooms 4024-4026.

3.Whitney Hunter’s  ”Fantasy and the Grotesque” room exhibits Brian Whiteley’s “over-sized clown sculptures, spinning paper mache mushrooms, giant ice cream cones and felt clown ‘portraits’.  It also features a news cast from [Whiteley’s] Greenwood Cemetery Clown performance.” This room is disturbing and enchanting.  I natural lumpiness of paper mache is a happy reminder that all is not perfect and the all inclusive treatment of the rooms installation is much appreciated.

4. Natasha Becker’s  ”Found in Transaction,” rooms 4123 and 4119 shows the paintings of Mirielle Jefferson and video work of Sharlene Khan.  Becker specializes in subtlety. At A show like Spring Break her curation is easy to overlook, but if you sit with it, you will find the quiet beauty and poignancy in the work she chooses.  Note that Jefferson has sanded and gessoed her canvases up to eight times each to gain the simple uniform texture that is enjoyed in her paintings.  You are observing hours of patient layering even in the strips of color on this work.  Dig deeper and one will learn that the smaller works are painted wood with collage, a less intensive form of art making with accessible price points as low as $50 for one block.  Conversely, Becker notes that Khan’s two channel screening of the video “Nervous Condition I, represents a feminist take on the ongoing implications of colonialism for a South African artist pursuing graduate studies in London.Her provocative performance is both a psychological self-examination and an investigation of the image of the “angry” and “crazy” black woman in popular media.”  This video work is not located in the same room as Jefferson but rather in a closet sized room near the stairwell. Take the time to sit in the arm-chair provided.

5. Then here are those who were not represented in the show, but produce such compelling work, that it’s recommended that readers check out what they are up to this week: Amani Olu (yes, bring him back AGAIN to Spring Break), Larry Ossei-Mensah (another would be repeat curator), Ru Hockley, Rebecca Jampol, Jasmine Wahi, Rashayla Marie Brown, Carron Little Michelle Papillion, and Esther Neff. Let’s hope someone at Spring Break reads this and offers an invite to these indie curators for 2016. Blind submissions are great, but if 95 curatorial slots are open, maybe personal invites should be extended to 10 – 12 organizer picks that stack the deck in in the fair’s favor. 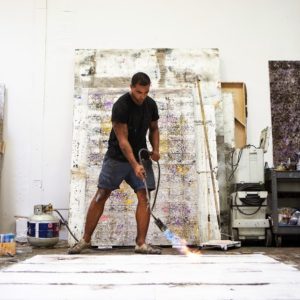 There has been a lot of buzz around Hugo McCloud.  He has been written about in the New York Times, W Magazine, GQ, and more....