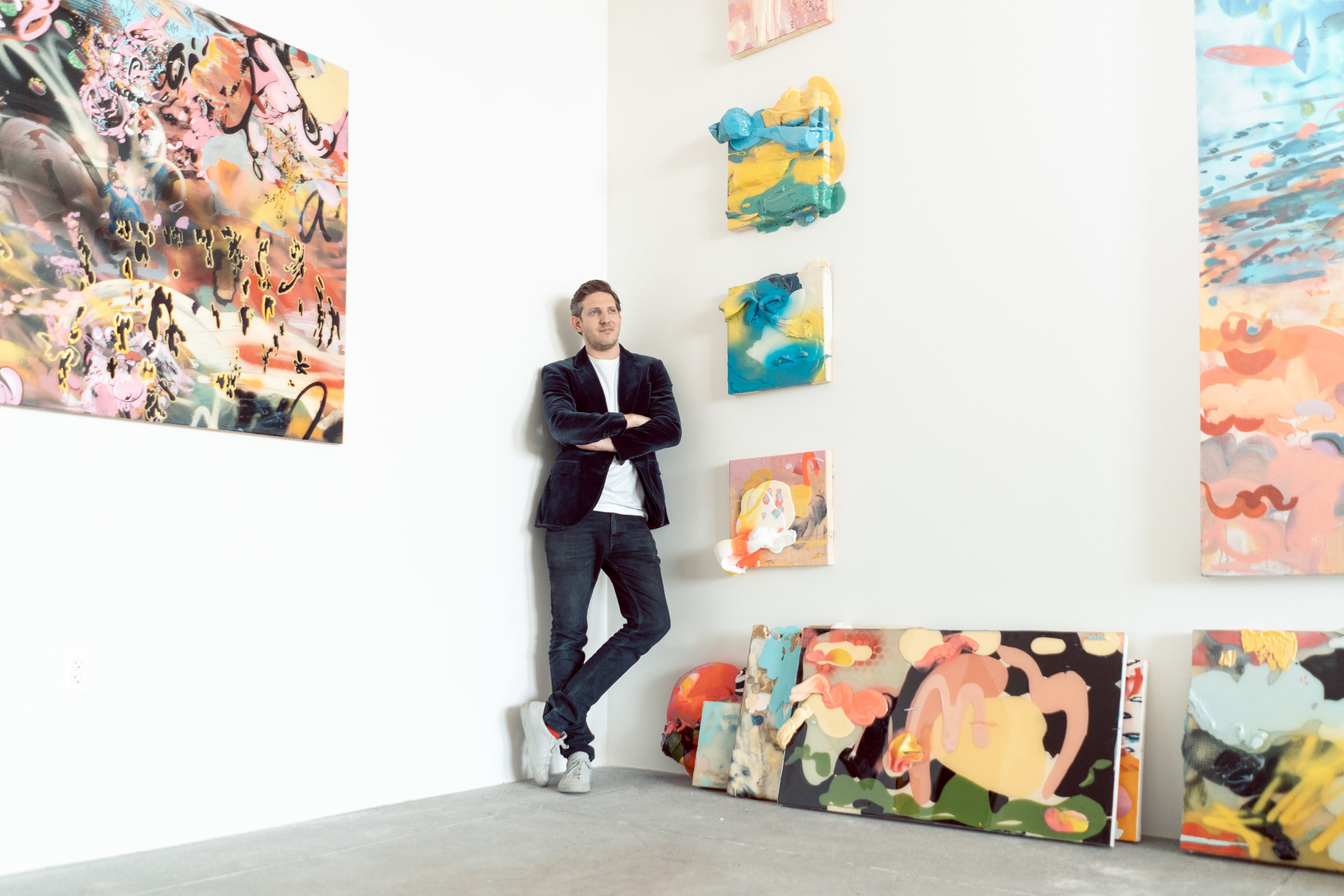 Found it! The Salvator Mundi by Leonardo da Vinci is here! 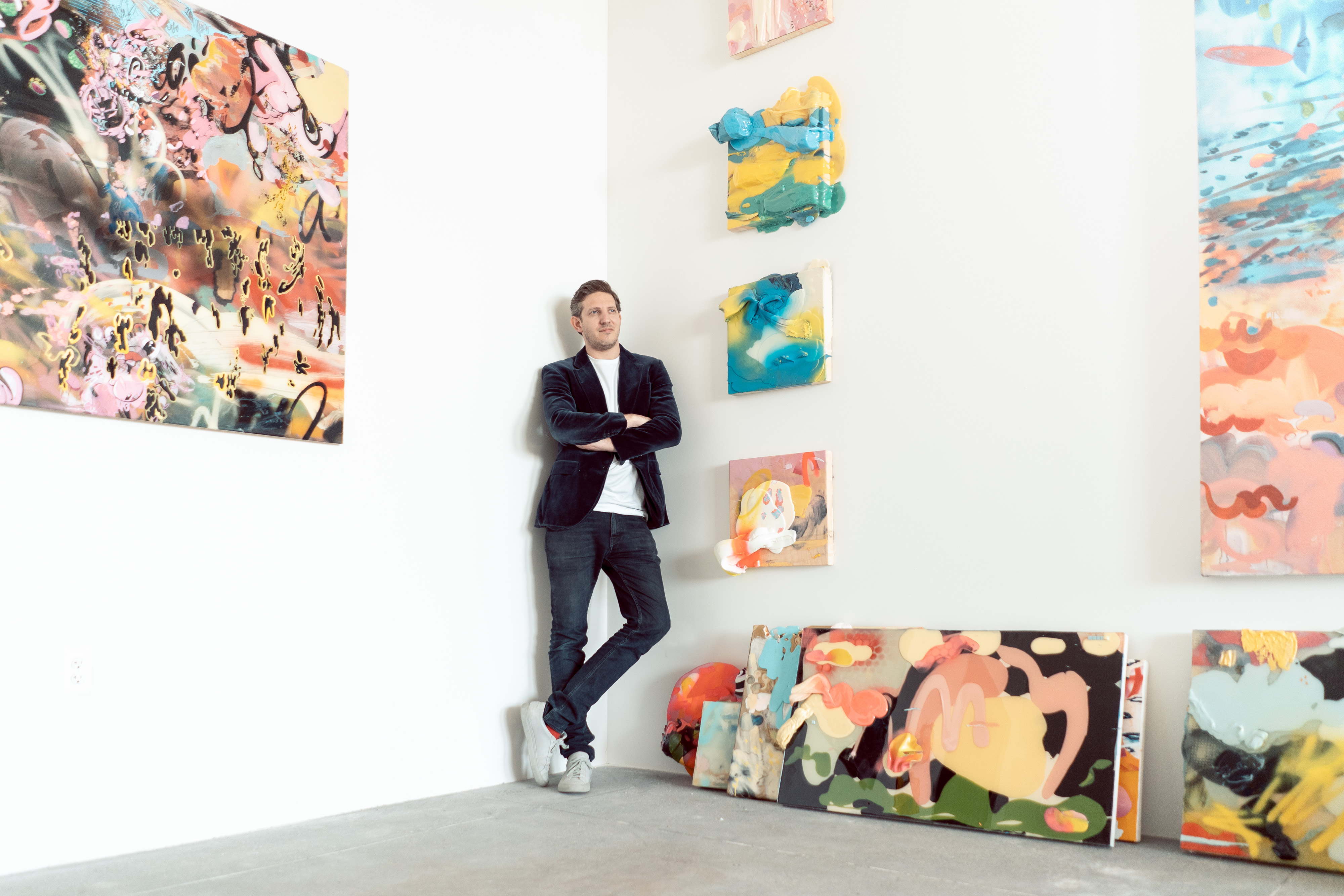 You would be hard-pressed to get the French artist Méïr Srebriansky (a.k.a Emmanuel Werthenschlag) to correspond at length via email or over the phone. However, ask him for drinks, coffee, or drop by his studio and you will probably spend hours together. Conversations with Srebriansky will wander off-topic, on philosophical tangents, the artist earnestly sharing his thoughts. The artist is extremely well read and finds inspiration in music, films, philosophy, and art, of course. We have had lively discussions on the work of French philosopher Gilles Deleuze, to that of actress Gena Rowlands, German philosopher Friedrich Nietzsche, writer and filmmaker Michel Houellebecq, and Swedish director Ingmar Bergman, among other things. Though his breadth of knowledge is enviable, Srebriansky does not come across as superior or take himself too seriously.

The subject matter of his paintings, however, are more whimsical– evoking cartoons, subculture, and details from everyday life. Sometimes they are completely abstracted, chaotic swirls of colors and shapes, but often, Srebriansky inserts recognizable words and images from popular culture into his color scapes. When questioned as to how these references come to him, he replies, “I didn’t grow up in Ancient Greece or at Versailles, so I use what I know or is imprinted in my subconscious, what populated my environment growing up.” Many would categorize these as ‘pop culture’ references, but the artist prefers the term ‘profane,’ and describes it as images or words bursting into his mind at random while painting. “Why not?” he laughs. “And also, it doesn’t take as long as adding a destructured Sistine Chapel.”

A Tom Wesselmann quote comes to mind with respect to this practice of Srebriansky’s: “I used what was around me, so my culture was what I used. But I didn’t use it for cultural reasons—it was not a cultural comment.”

When he is not painting, you will rarely find Srebriansky without some sort of drawing implement in hand. This particular habit underscores his genuine passion and love for what he does; it is as though the itch to create art presses him at all times and he must scratch this itch, even while engaging in other activities. 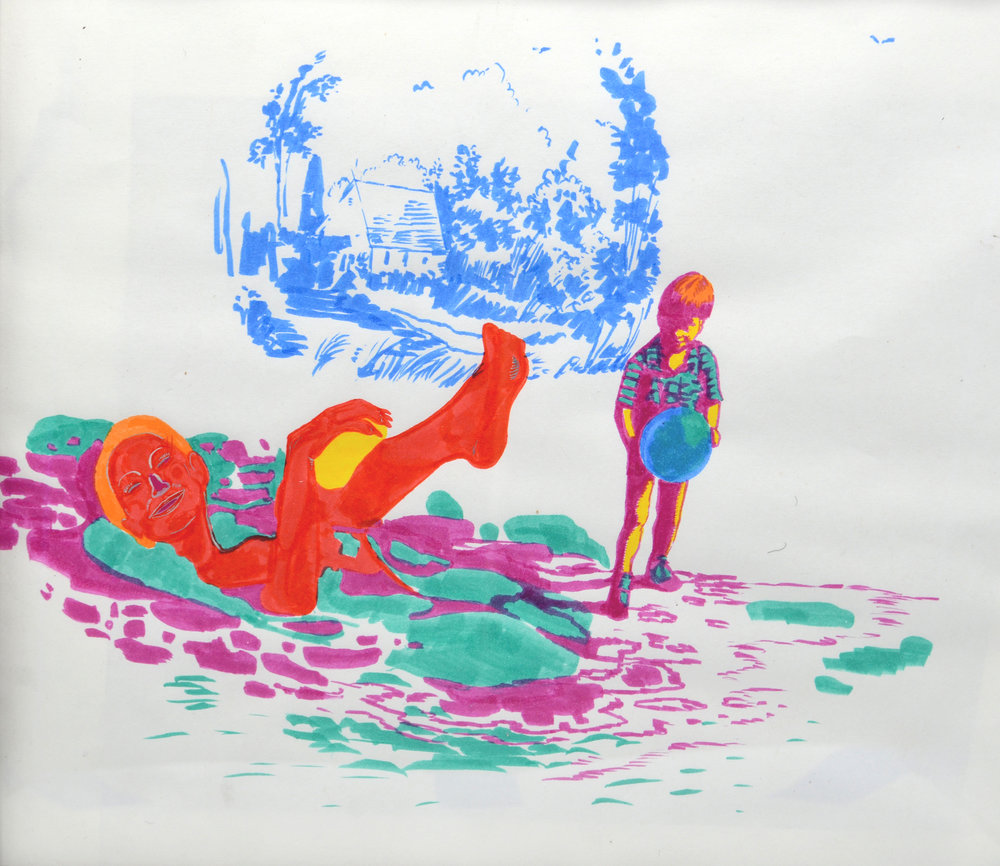 As a young man growing up in Alsace, a region in eastern France, Srebriansky was set on a path to study biochemistry, following in the footsteps of other members of his family. But, he found himself constantly distracted from his scientific studies by an urge to create art – mainly drawings. Thankfully, Srebriansky dropped out to enroll in Ecole Superierure des Arts Decoratifs de Strasbourg, an art school. As he did not much care for the course work, three professors set him up with a private studio space, where he would come to thrive. “Daniel Schlier was the professor who made painting great for me. I suddenly felt part of a tradition larger than myself,” Srebriansky recounts.

To anyone familiar with the artist’s work today, the work he was making during that period at art school would have been surprisingly unrecognizable. It was very realistic, figurative, and controlled, as opposed to the wildly abstracted, expressive works Srebriansky is known for now.

It was trauma that triggered this shift. In 2004, he tragically lost everything to a fire – all of his paintings, books, and drawings – even his computer. The threat to his life and his life’s work shook Srebriansky so deeply that he stopped painting for seven years. He kept drawing but could not bring himself to pick up a paintbrush.

During this hiatus, he focused more on his professional work as a graphic designer, taking corporate jobs in web design and art direction. Srebriansky sees his studio practice and his professional graphic design work as two different worlds. He does not contest that there is a creative element in making music videos or designing brand materials, but he explains that the difference to him is “something like the incompleteness of the object of desire against the seeking of pure desire with no object.” Simply put, the difference lies in his sincerity as a creator. When he paints, he aims above all else for sincerity.

In the years after the fire, Srebriansky would travel to NYC to see his younger brother Michel Werthenschlag. During one of those visits, he met his now-wife— Leora Klein; they began seeing one another and eventually, he moved to NYC. It was Klein, confident, strong-willed, and endlessly supportive of Srebriansky’s artistic passions who finally convinced him to take up painting again. He did and his artistic style was reborn, like a phoenix rising from the ashes. 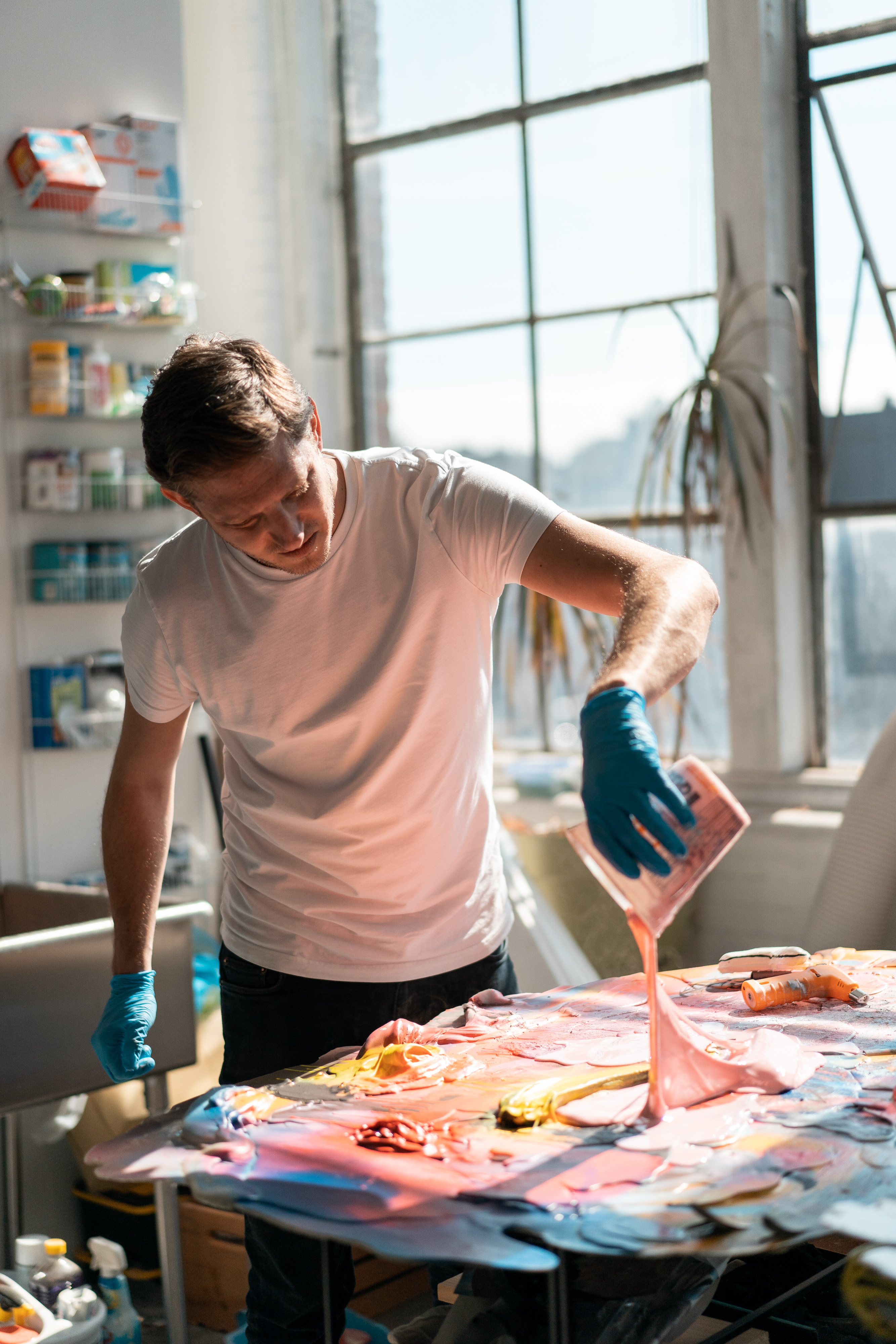 It was upon this artistic rebirth that Srebriansky started to really explore other mediums with which to create art. In addition to delving more deeply into abstraction and expressionism, he began to work with more sculptural materials such as resin, cast resin, epoxy, and wood. For Srebriansky, his three-dimensional mixed media paintings harness “the physicality of the act of painting” much more adeptly than a flat oil or acrylic paint surface might. Natasha Schlesinger, a New York-based art advisor, curator, and founder of app and Instagram blog @artmuseny, shared that Srebriansky has a “wonderful sense of color and composition.” It is the sculptural nature of his paintings “the way they project into the viewer’s space and transform two-dimensionality into three-dimensionality,” she continued, that Schlesinger responded to personally. 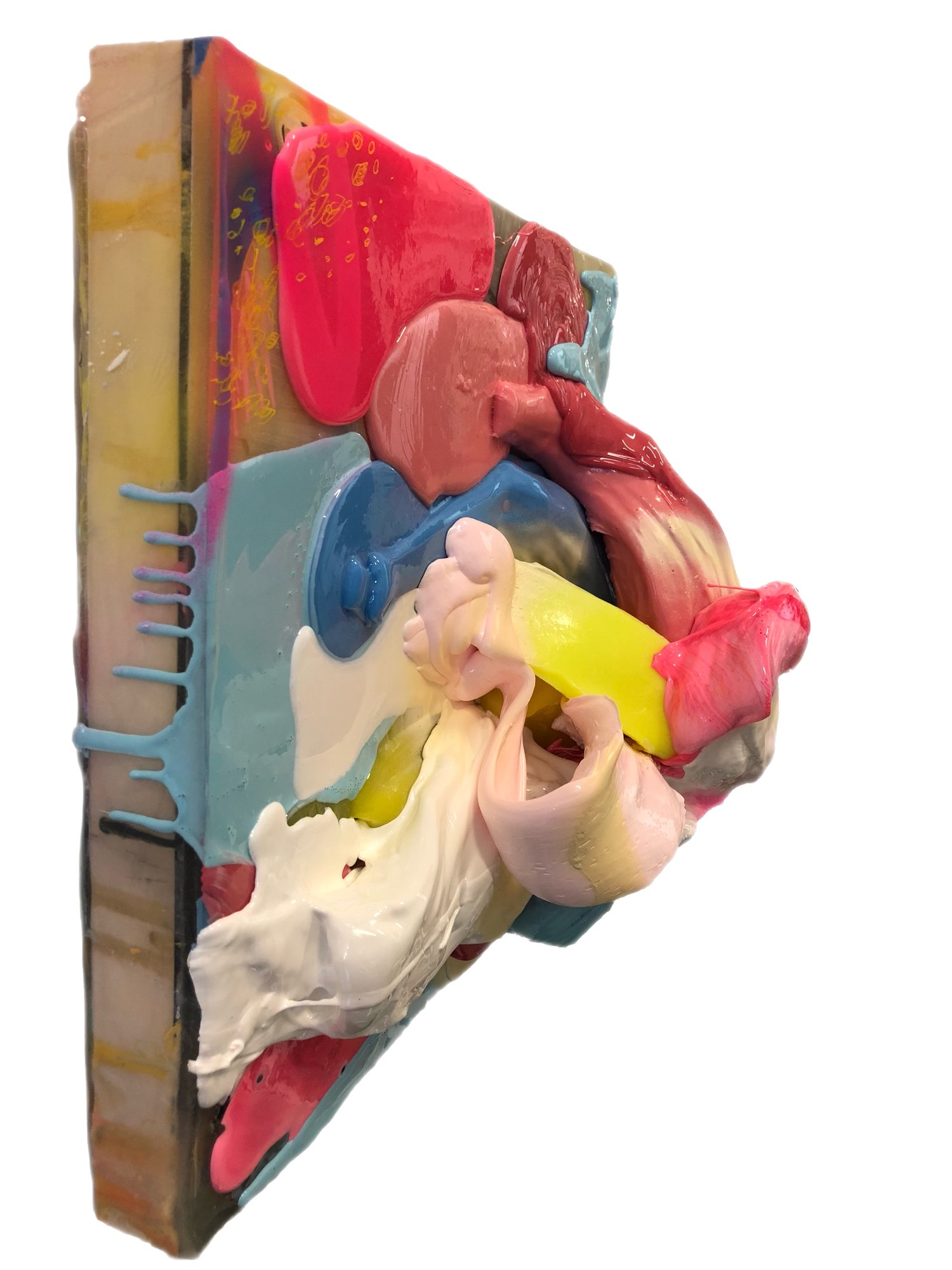 “It wasn’t just the bright and vibrant art that seemed to come alive that drew me in to Srebriansky’s studio, it was the joyful and innately cool energy coming from the artist,” said Carrie Eldridge founder of the arts-tech company ATO Gallery. The gallery included Srebriansky in their showcase during Hong Kong Art Week earlier this year. On the relationship between his abstract and more figurative work she comments: “Srebriansky proves that one doesn’t have to sacrifice the display of skill and storytelling to have a unified voice and style.”

Srebriansky embraces the use of lowbrow, kitsch, and glossy elements in his drawings and paintings because he enjoys the unexpected dimension it adds to the work, defying any particular aesthetic expectations a viewer might have. “It’s like a pre-language, the extremely short instant when the chaos of our mind structures itself to judge, pick and express the relevant words,” Srebriansky explains. “I try to visualize that. I like art that reflects the heterogeneity of the human condition, its struggles and eagerness to be free- its intimacy.” One definitely gets a sense of this chaotic, pre-language moment that Srebriansky is describing when looking at “Exploding Poodle” (2010) or “Melting Mickey” (2014) where figurative elements melt into abstraction. 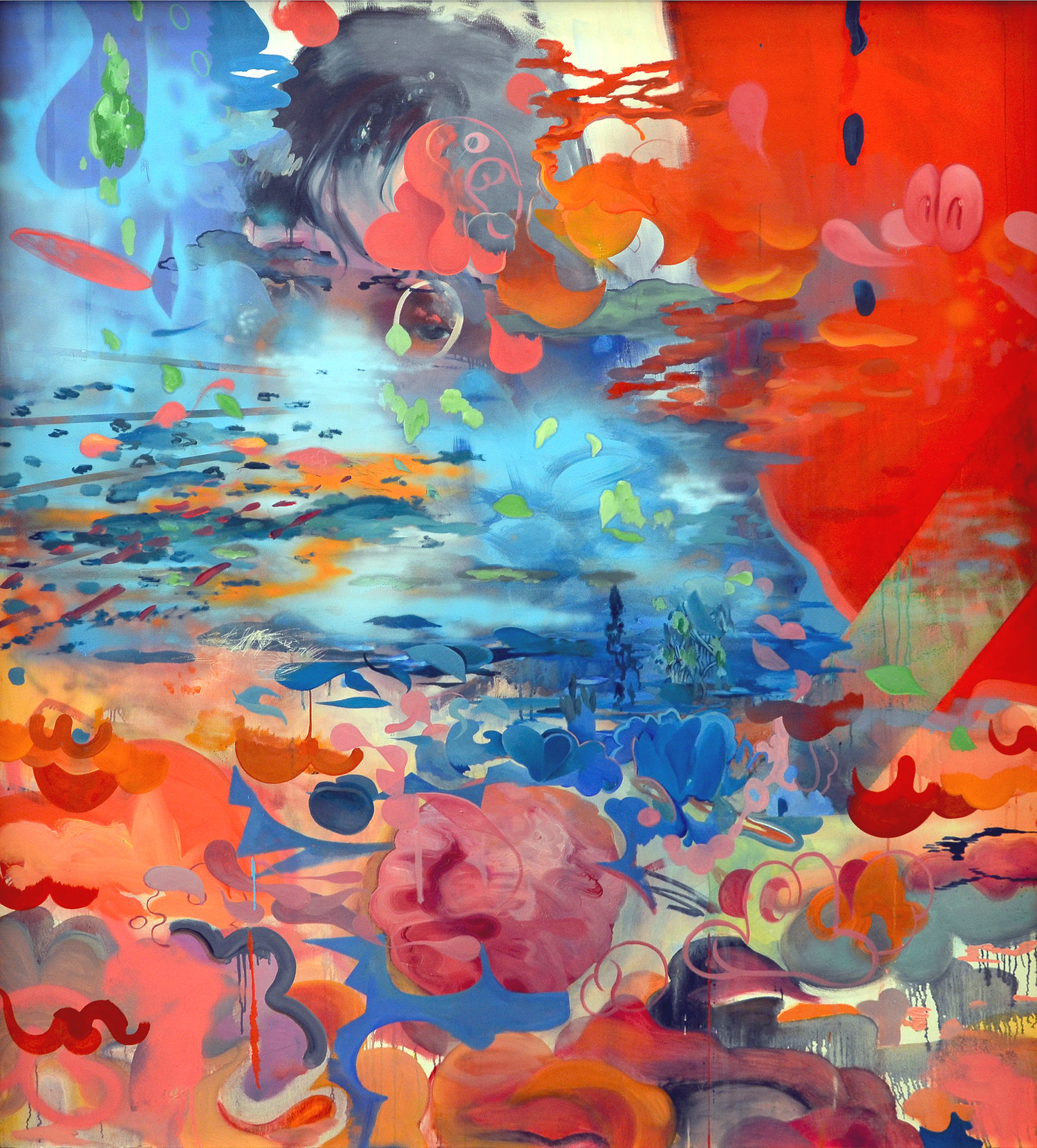 Srebriansky is a self-admitted perfectionist when it comes to his art making, but he has a complementary light-hearted, humorous side that comes out in casual conversation. For example, when asked how he knows when a painting of his is finished, the artist replied, “Years ago I read that you need two people to make a painting, the painter and a guy to shoot him to finish it. I never feel it’s finished.” Some paintings, like “Zembla” (2016) and “Across the Universe” (2016), take him six months, or even a year to finish.

Soon to be gallerist and artist Nancy Pantirer was drawn to Srebriansky’s work by the vivid color palettes and the organic forms in his works and even more to his application of resin. “His use of resin was much more painterly,” she remarked. “You can see strokes of resin along with texture build up, taking on interesting shapes on and off the wood. His work is lively and without boundaries.” Pantirer is renovating her studio space in Tribeca to accommodate a gallery which is slated to open in fall of 2019. Srebriansky is preparing for a solo show, his first at a gallery, there in January 2020.

I’d rather focus on what mysteriously makes sense, no matter if I like it or not.

All of this being said, inasmuch as his artistic endeavors might produce an artwork that has that certain ‘wow’ factor, Srebriansky insists that this is not something that he is worried about intentionally creating in the beginning. “I’d rather focus on what mysteriously makes sense, no matter if I like it or not,” he explains.

It is unsurprising that Srebriansky has traveled a long and winding road in becoming the multifaceted, accomplished artist that he is today. He was born to an Orthodox Jewish family in 1976 in Strasbourg, France. Family and his Jewish heritage are very important to him – reflected in his chosen artist alias “Méïr Srebriansky.” “Méïr” is his Hebrew name, and Srebriansky is his late mother’s maiden name. As his mother did not have any brothers, he felt that taking her maiden name was a way to honor his matrilineal line. 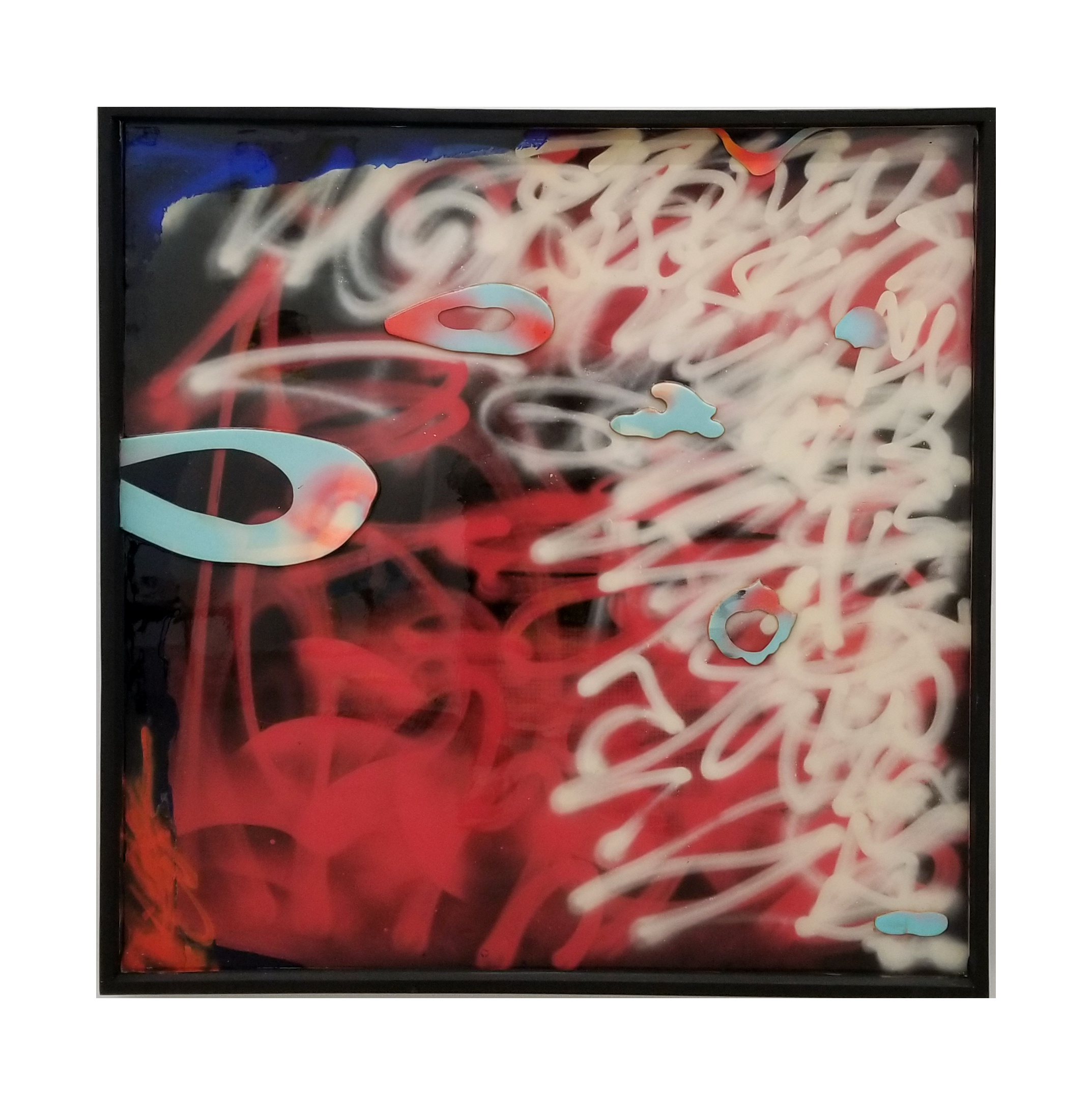 More than just an artist, Srebriansky is a loyal husband to Leora Klein and a dedicated father to three children. Rather than seeing these different facets of himself as separate and opposing, Srebriansky strives to integrate them, working with instead of against. He says that he must prioritize differently as an artist with a family, which is not easy but is fulfilling. “They bring happiness and playfulness [to my life]. I’m not my most important person anymore and it’s liberating,” he muses.

Srebriansky lives with his family on the Upper West Side and has his studio space in Mana Contemporary in New Jersey. Mana is an acclaimed arts center providing services, spaces, and programming for artists, collectors, curators, performers and community. “At Mana, artists work hard and we always have friendly encounters or chats, but we don’t exactly hang out playing piano and drinking absinthe,” Srebriansky jokes. He laments that the ‘Montmartre-esque’ era of the art world is over because it has become too individualist and competitive. Even so, he touts Mana as an amazing place to work, he calls it “the Four Seasons of art studios,” full of noteworthy artists. 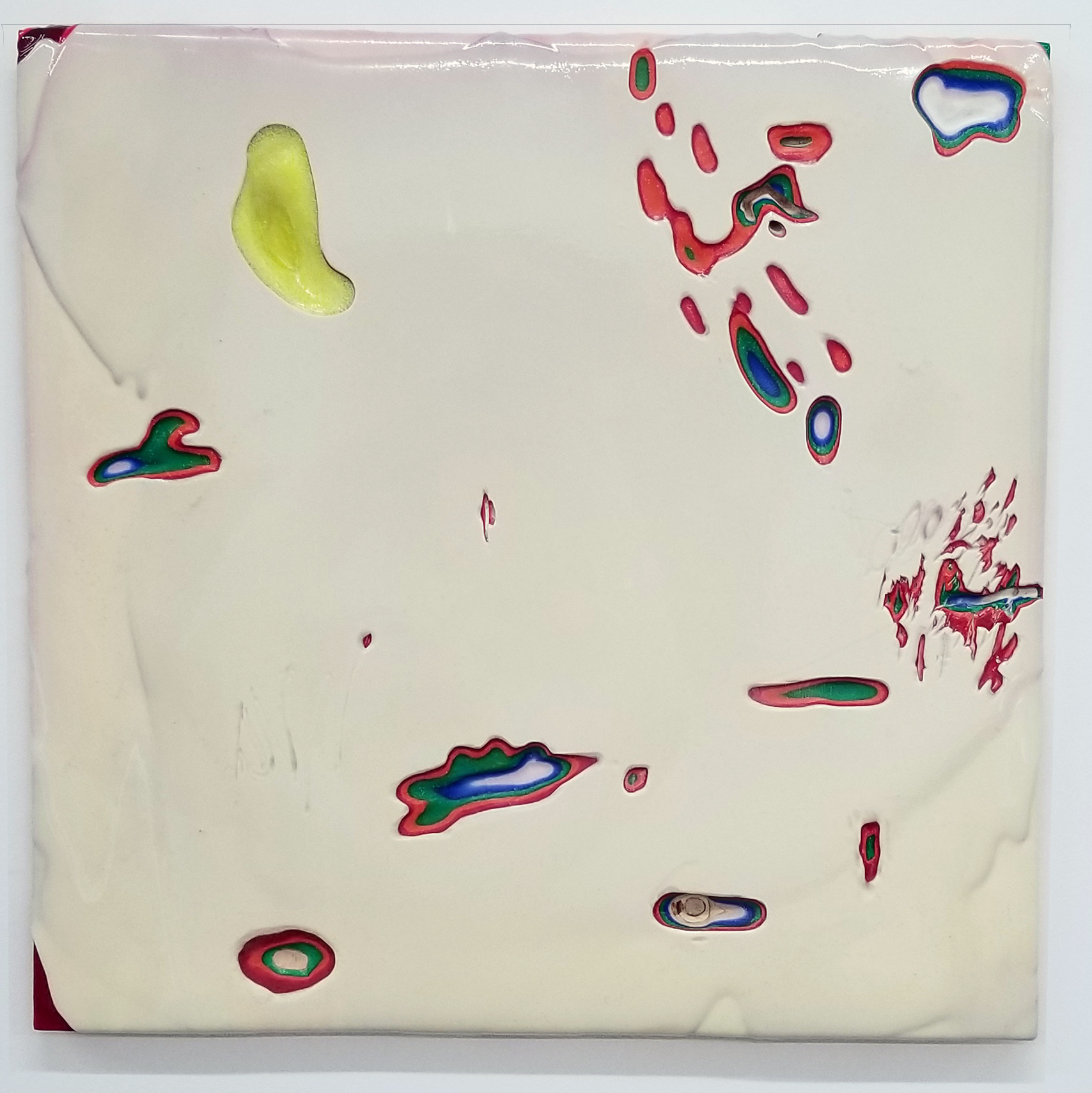 When asked if what advice present-day Srebriansky give a young, early twenties Srebriansky, the artist replied thoughtfully, “Ego is overrated. Don’t be afraid to start over and over and over. Even if you’re seduced by part of it, erase it painfully and be brave knowing that what comes next might be even better.” Then he added, “If I could go back I would have cared less about what people think or expect. I would have started to consider [being an artist] as a career earlier on without being embarrassed by the term. But most importantly [I would have told myself] be joyous, let it bring you joy (not happiness, joy)– or switch to something that does.”

Méïr Srebriansky will be participating in SuperFine! Art Fair, May 1- May 5, 2019, with a solo booth of drawings and sculptural paintings. 107/111 Grand Street, New York, NY 10013. There he will be premiering a limited edition silkscreen print printed in collaboration with Gary Lichtenstein Editions.