“Your Decolonizing Toolkit:” Freeing Thought from Conditions of Exploit 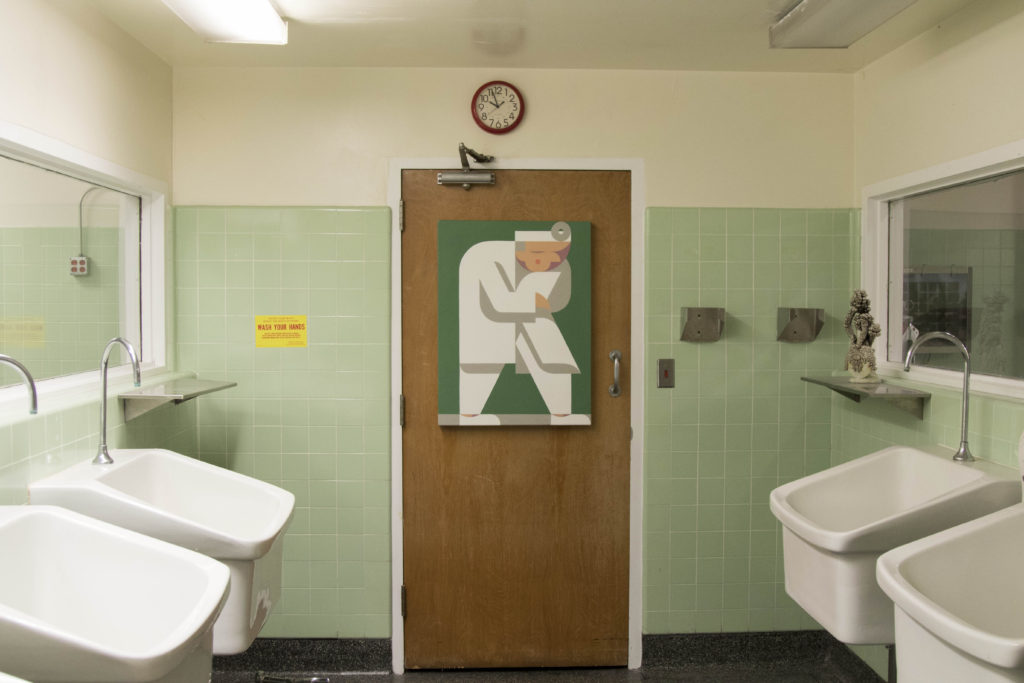 If you find yourself in Los Angeles this Halloween and you’re looking for an experience that’s off the beaten track, head to the West Adams area where art advisor John Wolf has transformed an abandoned hospital into a creepy, truly unforgettable art exhibition. Featuring 86 artists, the works in the show, entitled “Human Condition,” are interspersed amidst old offices, surgical rooms, maternity wards, and even the cafeteria. Though in a hospital, the experience was anything but sterile. Hidden inside old equipment and hung next to the forgotten memos and medical pamphlets, the 200 works of art in the show range from sculpture, drawing, painting, and immersive installations. Some works were done specifically for the exhibit, and the majority of them center on themes related to the human body and the experience of being in a hospital. The juxtapositions between the artwork and the remains of the hospital are clever and disturbing, though oftentimes the building itself overshadows the art. The moments where the art truly stands out, however, were visceral and, as I wrote several times in my notes, traumatizing.

“Every aspect of the experience is a spectacle. I drove up to the dilapidated center and entered the parking lot through a broken chain-link fence.”

Formerly known as the Los Angeles Metropolitan Medical Center, the hospital was opened in 1971. The center ran successfully until controversy and lawsuits began to emerge in the 2000s. Included in these lawsuits were allegations that the hospital and its parent company, Pacific Health Corp, had been recruiting homeless people from Skid Row and admitting them to the center for false illnesses in order to collect funds from Medicare and Medi-Cal. In 2013, the hospital admitted its guilt, but continued to swindle the health programs by locking elderly and disabled people into its psychiatric wards without any grounds and billing for the forced care. Later that year, the center finally closed down and was left in a state of decay.

Knowing the disturbing history of the hospital, I was apprehensive about even entering the building. Every aspect of the experience is a spectacle. I drove up to the dilapidated center and entered the parking lot through a broken chain-link fence. The spots are still labeled with their previous functions—reserved for ambulance, reserved for doctors. I parked in an ambulance spot and reluctantly walked up the ramp to the building. 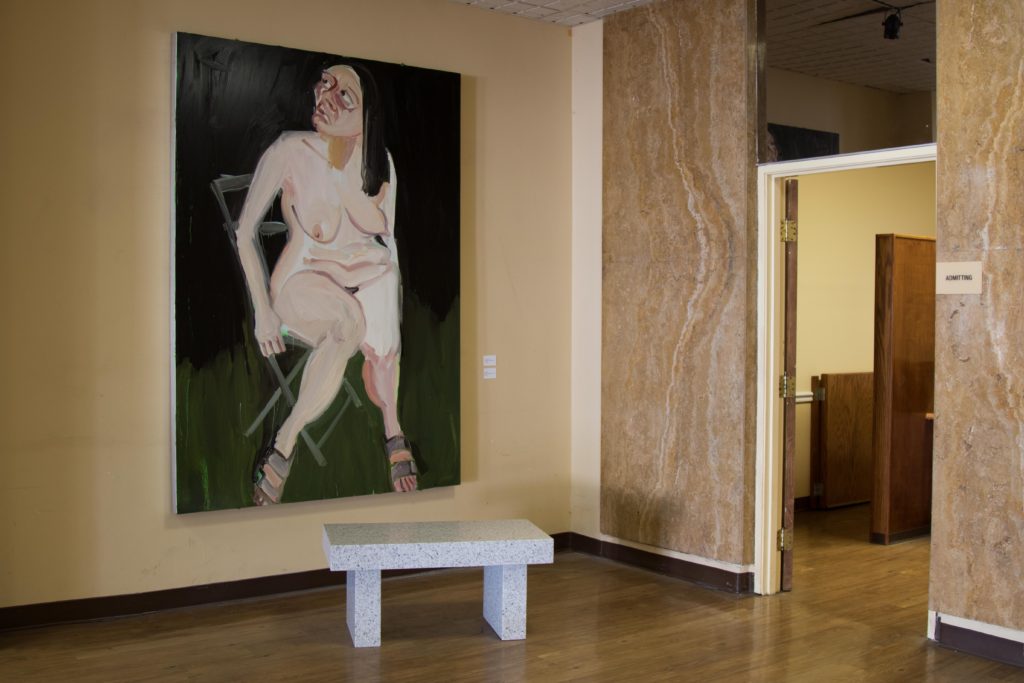 The entrance to the exhibit was innocuous enough. The first works on display were familiar names—Jenny Holzer and Chantal Joffe. Holzer’s granite bench was inscribed with a phrase that acted as a harbinger of the visceral works to come: “What a shock when they tell you it won’t hurt and you almost turn inside out when they begin.” 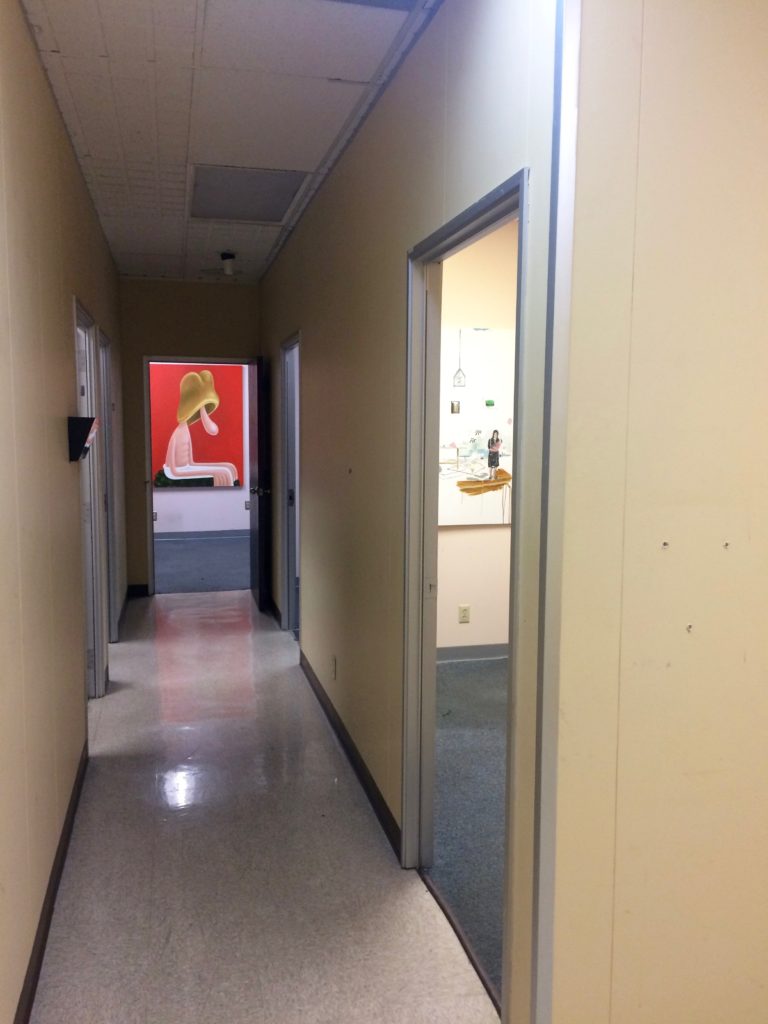 Diving into the exhibition space, things started to get uncomfortable. The first floor contains the old offices, administrations areas, and cafeteria. I quickly regretted attending the show alone as I crept through the abandoned rooms, in some cases having to push aside old curtains or slip through narrow, ghostly hallways. At the end of one long hallway was a painting by Louise Bonnet of a man sitting, as if waiting for a doctor to begin an examination.

The offices had carpets with stains and ceilings with open holes and wires sticking out. While most of the furniture had been removed, there were the occasional neglected desks, bookshelves full of medical books and binders, and abandoned examination tables. The artwork displayed in these offices was innocently hung over the desks and tables as if it had been there when the hospital was operating. I spent more time watching my step for an old needle or unidentifiable stain than I did looking at the art. At one point I noticed an Advil on the ground and I silently hoped it was from a recent visitor and not an artifact from the sordid hospital. 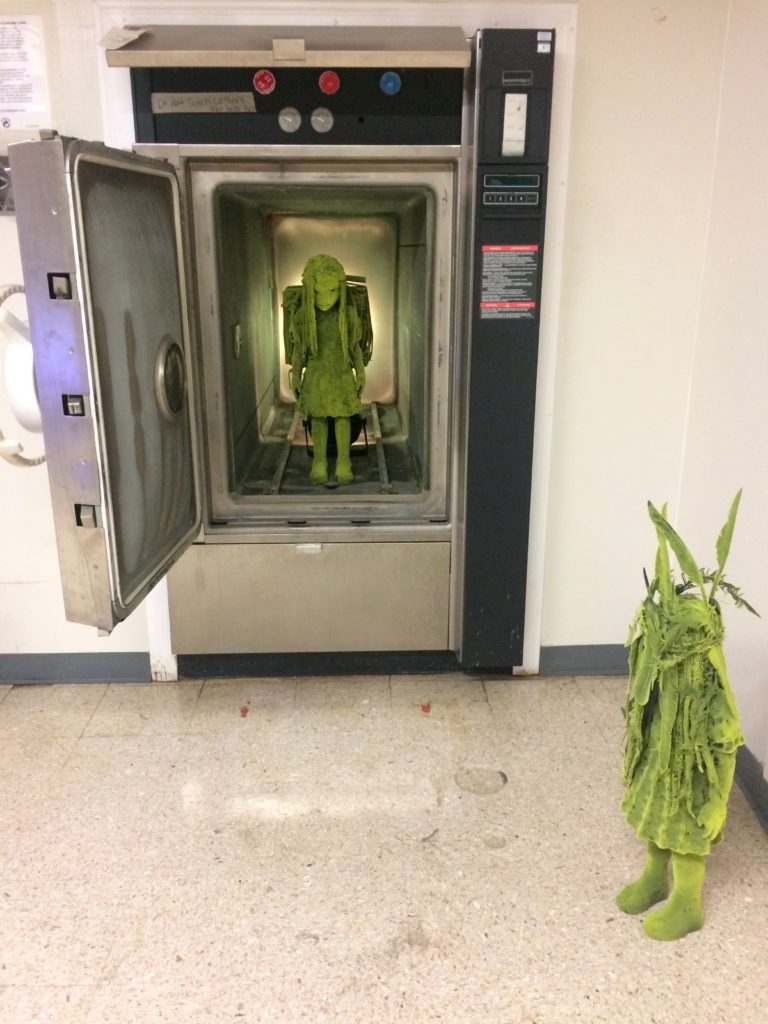 Outside the offices were the old pharmacy and autoclaves. Sounds of video installations echoed off of the metal equipment and smells of formaldehyde and cleaning chemicals began to emerge. Hidden inside an autoclave was a sculpture by the Finnish artist Kim Simonsson. The piece,  “Voodoo Moss Girl,” was a small, fuzzy green figure that looked like it had wandered out of Pan’s Labyrinth or a nightmarish forest.

After getting lost several times on the first floor, I took the elevator to the second floor and immediately wished I had taken the stairs. As I exited the rickety metal box, I noticed a sign warning of the temperamental nature of the elevator and made a note to never enter it again. The second and forth floor (the third was not included in the exhibit) continued much the same as the first, but with increasingly more corporeal and psychologically twisted artworks. Containing the surgical rooms, special care unit, and maternity rooms, these two floors truly stuck with the hospital theme. 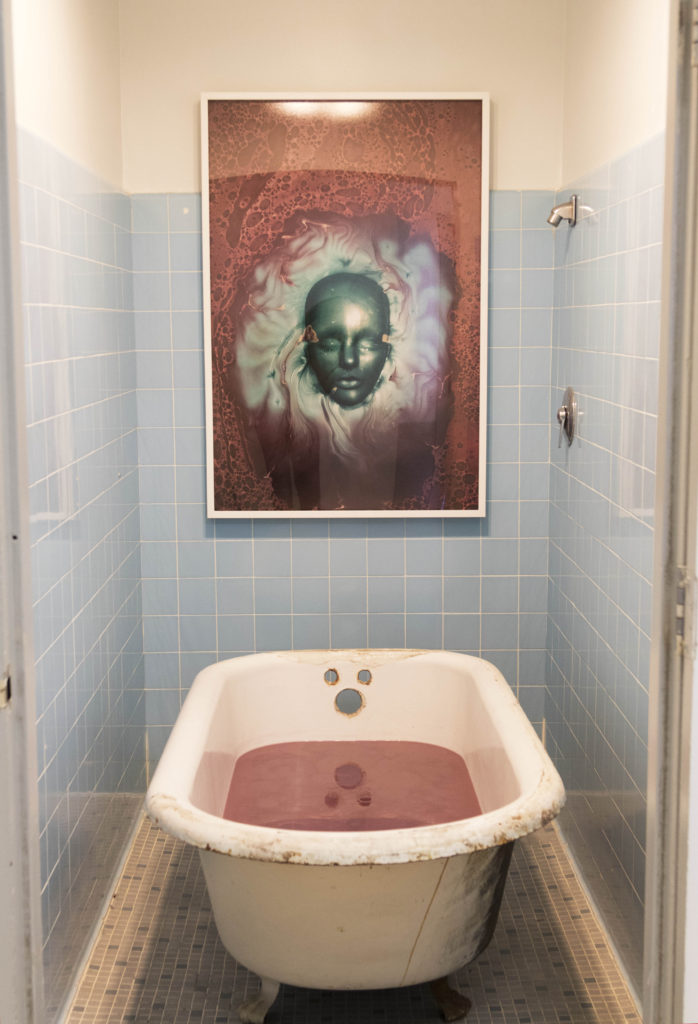 The most memorable piece for me was Gintare Bandinskaite’s installation that included a photograph of a female face emerging from a pool of red and blue liquid. Entitled “Aurora Australis,” the photograph was installed above an old bathtub full of the same dark red liquid. Alluding to the artist’s technique of making her photographs, the installation chronicled her creative process. Displayed in a small room labeled ‘handicapped shower,’ the mesmerizing, swirling liquid in the photo juxtaposed with its incredibly still counterpart in the bathtub was haunting. I couldn’t help but imagine a figure hidden beneath the red surface. Perfectly blending beauty and horror, this piece was a standout in the exhibition. 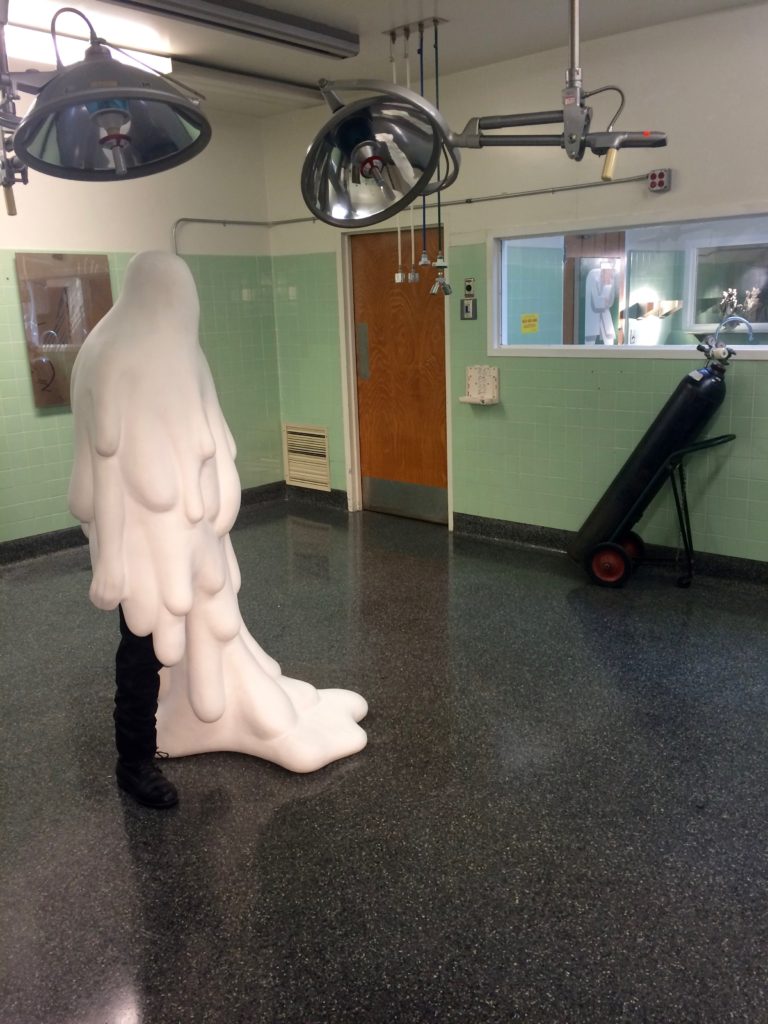 In a nearby surgery room was a more cartoonish and less visceral sculpture by Daniel Arsham of a figure shrouded in a thick, gooey, white substance. Only the leg and shoe of the anonymous figure could be seen sticking out of the heavy goo. Clouded and contained within the white substance, the figure appeared to be trudging slowly, as if about to succumb to the physical burden.

Arsham and Bandinskaite’s works were just a few of the 200 pieces on display. Covering over 40,000 square feet of the hospital, the show is vast and diverse. From the ghostly parking lot to the rickety elevator to the disturbing, subtle sounds and smells, “Human Condition” is truly a unique, immersive experience that is not for the faint of heart. The corporeal and psychologically twisted nature of so many of the works left me feeling as if I had just stepped into a nightmare. With my heightened awareness of the previous undertakings in the space, I found my best defense against the lingering sense of abandonment and nausea was to focus on the spectacle and try to forget the reality.