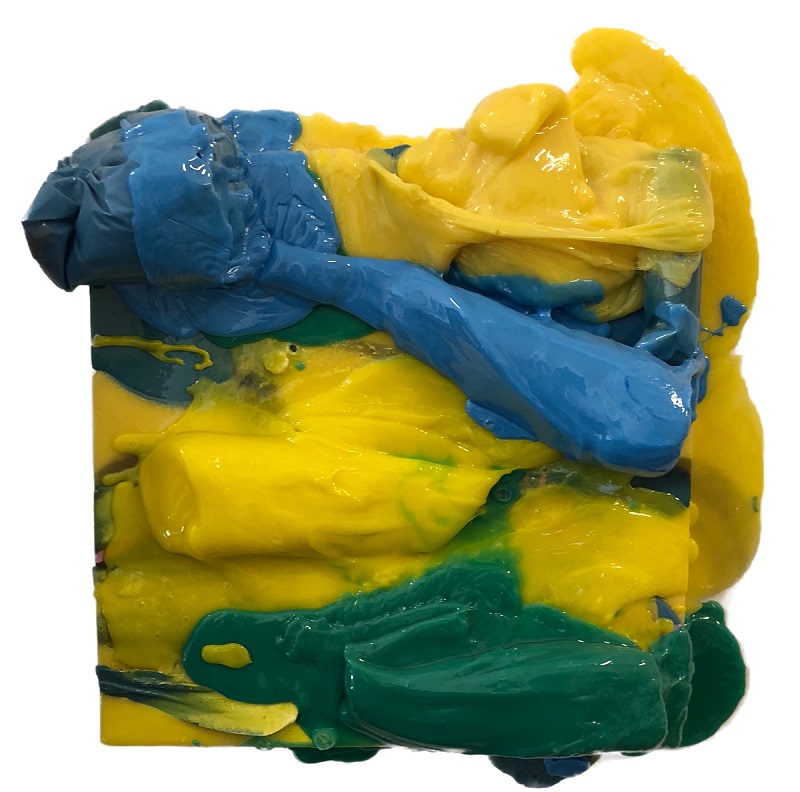 People are such creatures of habit. We relish our routines, what feels familiar often is the most comfortable to us, and it’s something that we try to hold onto. Going outside of that, and stepping out of our comfort zones can be daunting, terrifying, and sometimes feels wrong. What makes an artist step out of his or her comfort zone? What happens if a major life event stops you in your tracks and you have to rethink your whole artistic process? For Méïr Srebriansky, a New York City-based visual artist who works out of Mana Contemporary, cataclysmic events have pushed him to test his own boundaries. The victim of two major fires, these events had a major impact on his personal life and his artistic identity, resulting in a step back from working with paint. 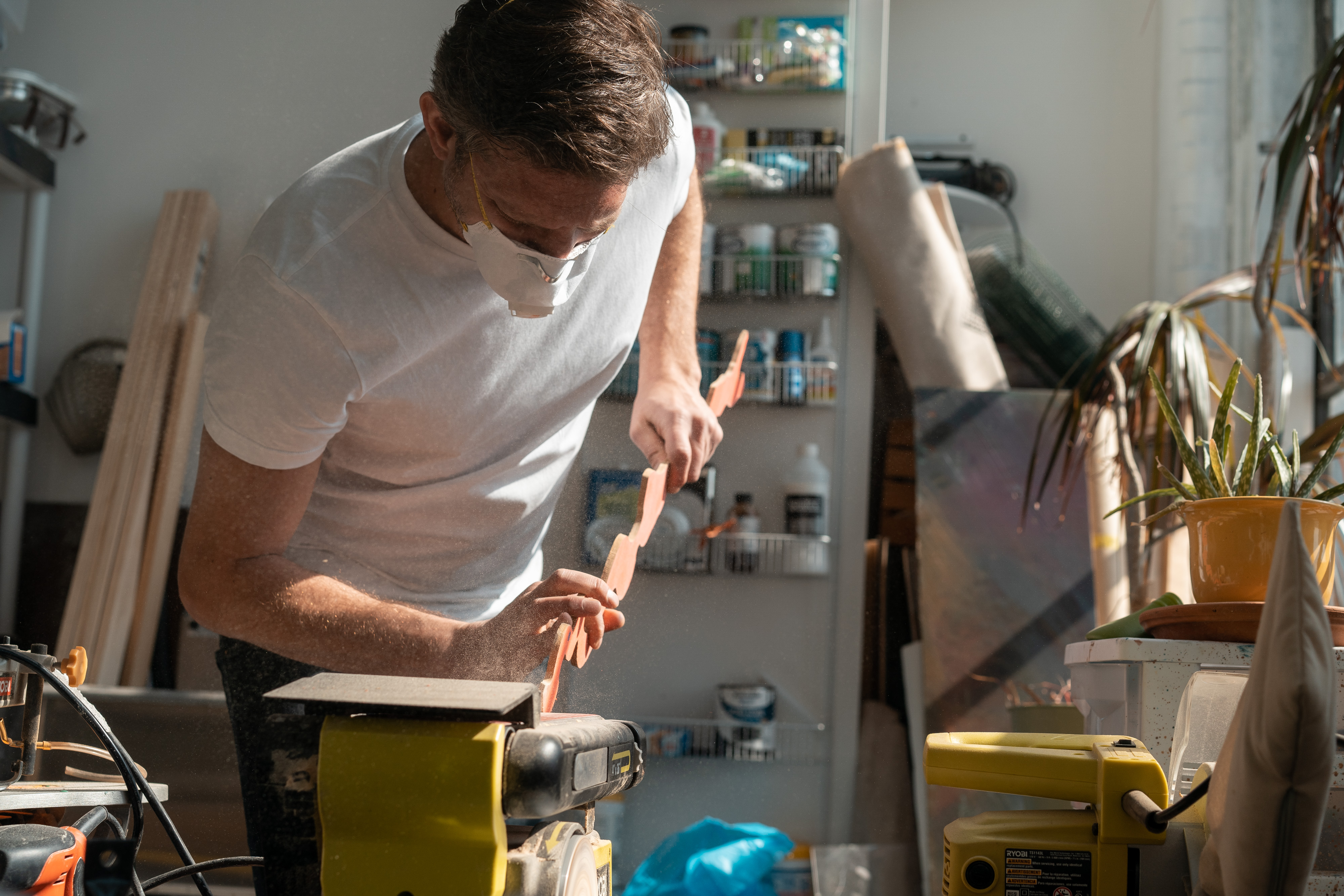 Srebriansky’s recent solo show, “Age of Resin” which is on view at 81 Leonard Gallery, reflects this major turning point in the evolution of his work and artistic style. One of the fires destroyed his studio and a major body of work. During this time, Méïr decided to take a hiatus from painting and he began experimenting with cast resin, wood, and debris. “Age of Resin” includes pieces from his painterly investigation, notably a new series of tulip and tondo-style paintings, resin and mixed media paintings, and select works on paper. Also, hot tip, if you don’t live in New York or couldn’t catch this show in-person, you can take a virtual tour of it on Eazel’s virtual art platform!

I’ve been a major fan of Srebriansky’s work since coming across his booth last year at the Super Fine Art Fair in New York. I was immediately entranced by his use of bright, vivid colors and the fact that his medium of choice—resin—has an intense physicality to it. His work looks like it’s literally dripping off the walls, and as a result, the works reveal puncturing and layers of resin that lie beneath the surface.  So many times it’s hard to know what going on behind the scenes (unless you are lucky enough to visit an artist studio while work is in progress), and I love the fact that Srebriansky’s work is transparent in that it gives an insider look into his process. 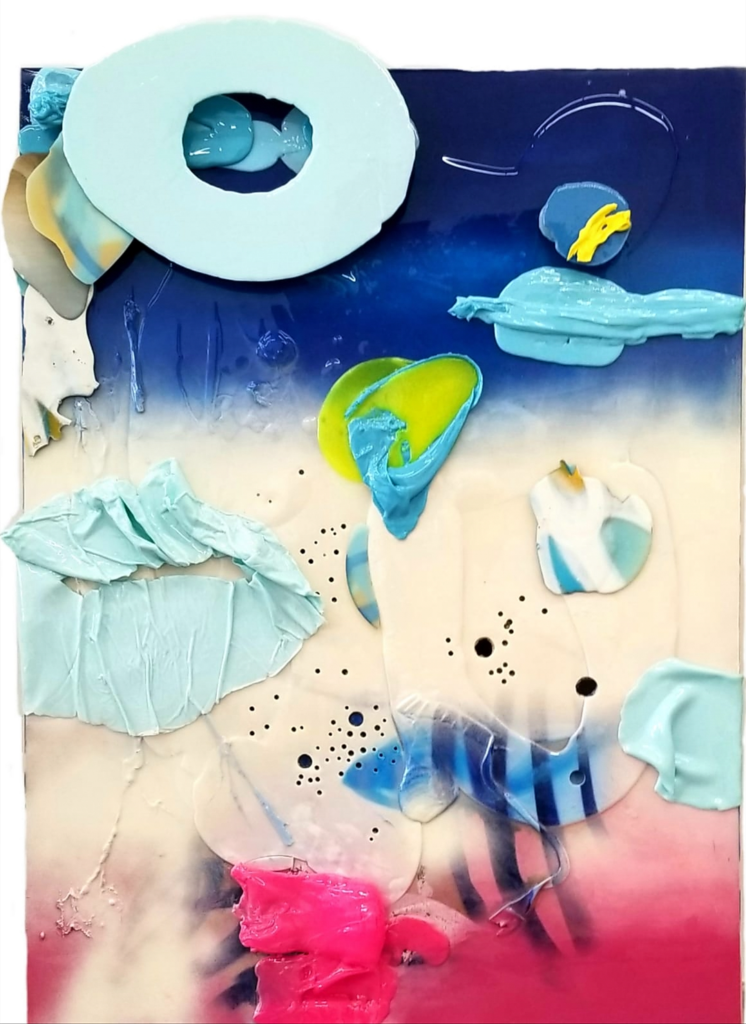 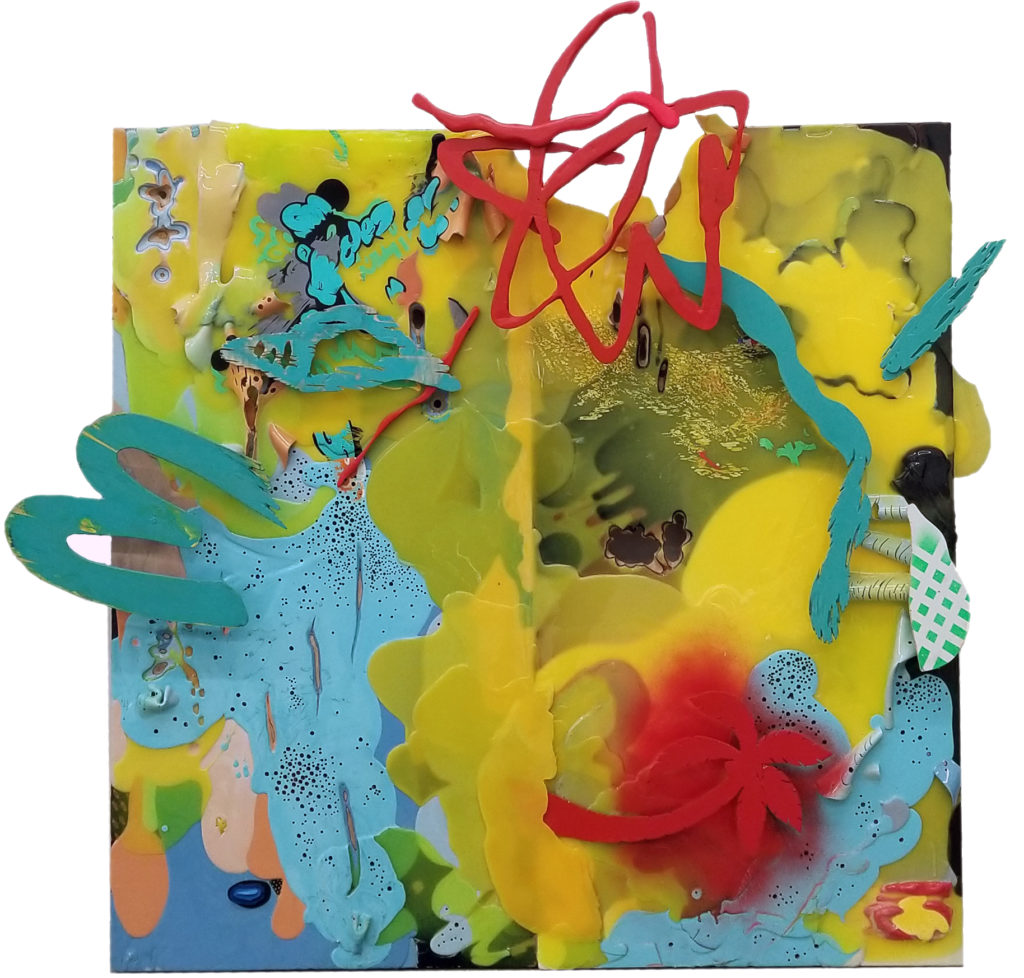 I was lucky enough to catch this exhibition in person, and since being stuck in social isolation, I’ve been thinking a lot about his work and how aptly this exhibition is titled “Age of Resin.” For me, Srebriansky’s work has always been synonymous with resin, but this exhibition is an exploration of his musing (“Beach Ballin’ in Antartica,” one of my favorite pieces, is a playful hyberbole and a throwback to favorite summer past times) and self-exploration of different subject matters. Most notably, “Napalm D’Or,” which is a commentary on climate change and is made out of recycled resin. Having only met Srebriansky very briefly, I didn’t know his underlying wit or sense of humor, which especially stood out to me when seeing this exhibition.

Méïr Srebriansky. Untitled (Of Monkeys and Men). Acrylic and ink on paper. 19 x 11 in.

His drawings on paper were a departure from his normal use of resin, vibrant colors and are an ode to what I interpreted as darker times. Unfortunately, the exhibition did not go in-depth to explain the transition from his resin works to his drawings, and I would love to understand these works a bit better. One drawing in particular left me with many questions: “Of Monkeys and Men” feels like a reflection of a dystopian world with a burnt orange monkey smoking a cigarette. It feels like a scene straight out of “2001: A Space Odyssey”; enclosed in the plume of the cigarette smoke are outlines of different, unidentifiable flowers. 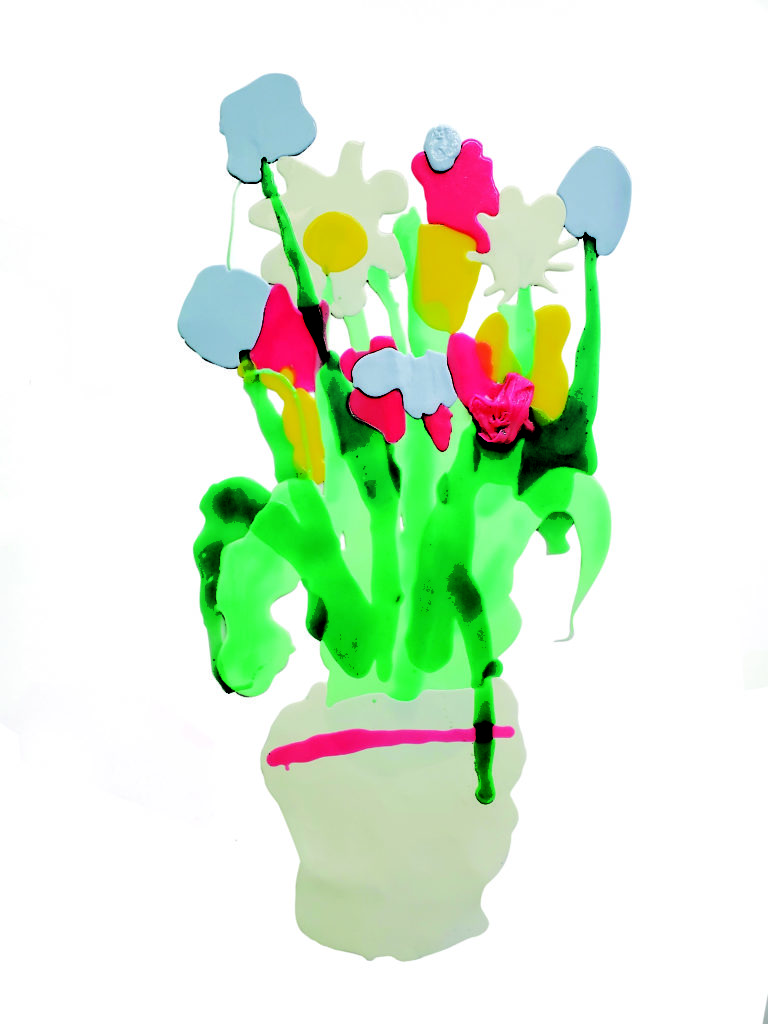 On a lighter note, I loved his renditions of tulips, which were subtly woven throughout the show. When first entering the gallery, you were immediately greeted by a giant set of tulips that were positioned on a center wall. The history and meaning of tulips in art have been long-standing, and normally are a signifier of a sign of love, lust, and sensuality. A deviation from his labor-intensive and multilayered resin works, Srebriasnky made his first resin flower for his wife earlier this year and continued to make them. The flowers are whimsical and playful.

The exhibition is accompanied by an illustrated catalog, featuring poems by Bob Rosenthal and Scott Beal. If you are new to Srebriansky’s work, which in some ways I wish I had been since I walked into the show with a lot of preconceived notions about his style (some of which were correct and some other thoughts, not so much), this exhibition is the perfect place to start.

For more information about “Age of Resin” check out 81 Leonard Gallery or visit the show virtually through Eazel.