2020-2021 is a year in which the whole world is facing great challenges. Painter Ma Tiantian, separated from her family back in Wuhan, and living here in New York, she is also experiencing life in this chaos. However, her paintings in “Tra(n)ce” at Gallery 40 do not follow any conventional trend of eschatology nor do they demonstrate passion for criticizing the outside world. Tiantian is a painter who prefers to meditate quietly in mundane life; she would relocate the world she is facing to broader galaxy coordinates. If one came upon Tiantian’s paintings in a gallery, one might feel they could be from Édouard Vuillard or Henry Darger.

In “Keeping Warm,” Tiantian has shown her extraordinary talent in juggling contradictory elements. What melts away is the hazelnut chocolate-like background and table, which echoes our current situation: the world is melting in chaos, while the cake is solid. It is clustered in the middle by flame-like palms, but shouldn’t the flames be tilted in the same direction, because of the wind? These flame-like palms are probably palm-like flames; they all have their own limbs and will, and if they wanted to cluster together, they would have such power. Tiantian’s favorite poet is Walt Whitman, a father figure in the poetry world who writes about the liberation of the body. However, Whitman would integrate the individuals’ voices into a collective voice that represents the United States. Tiantian is doing the opposite—shattering the grand narratives into dreamlike fragments and dissipating her statement into particles like stars in the universe. These dismemberments of body and life represent the countless kinds of understanding and expression of our chaotic reality. Tiantian’s mind is vulnerable and warm, just as flames glowing at night.

The metaphor of flame burns in many of Tiantian’s paintings. We, as New Yorkers, are very familiar with the lovely carousel in Dumbo. In Tiantian’s work, it becomes a gift box of flames, while the Manhattan skyline, defined by the East River, consists of numerous gift boxes with tiny fires. The lids are glowing with pink shadows, and the boxes are crooked and twisted, but the small flames in the boxes are ready to emerge. The cold decoration of the gift box will not pinch off the fire sprouts. Desire’s flame through the city is destined to dance together in this never-ending banquet.

Tiantian knows how to capture the purest desire in a most subtle way. Audre Lorde writes in The Use of Eroticism: “The word Erotic is originally from the Greek “Eros”– the god born in chaos and representing strength and harmony, the most original creativity.” This is why when one looks at the nipples of the naked women in Tiantian’s painting, there is no sense of the pornographic, but a feeling that they are as natural, rich, and beautiful as the grapes in the midsummer. Also, inheriting Fernando Botero’s style, Tiantian’s vision is not limited to exploring the natural round shine of the characters; she has stepped forward to challenge the edges of reality. In “Jackie With My Painting,” the woman has translucent legs; lazily they stretch out of the frame, which turns the painting into a painting-in-painting. This undoubtedly shows Tiantian’s magnificent imagination.

In “Rambling,” two chubby souls are holding their chubby hands in the air-like balloons; they also wear heavy coats made of cloud, affectionately. But will their bodies be pierced by the branches crossing the sky? The interplay of liquid, air-filled brushstrokes and solid, brightly colored brushstrokes is precisely our subjective way of thinking tra(n)ce-ing again and again in objective reality. What I hope for in 2021 is that the real world can have fewer fatal branches and protect well the little chubby souls under Ma Tiantian’s brush; they are the balloons we rely on to connect with the universe. 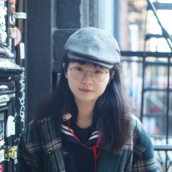 Writer, Cultbytes. Jiaoyang Li is a writer and interdisciplinary artist currently based in New York. Her work has received funding and support from the New York Foundation for the Arts, British Council, and others. l website l