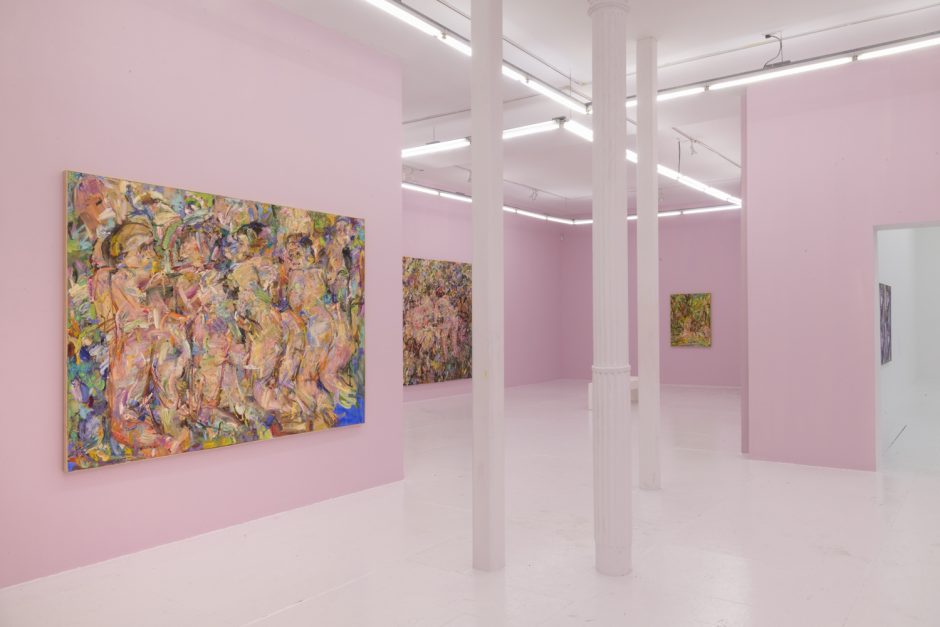 Inspired by the #MeToo movement and other hopeful signs of the declining patriarchy, the LA-based artist Vanessa Prager takes back image production of women’s bodies from exploitative masculinist culture in her second exhibition at The Hole. Using a color scheme evoking Francois Boucher and French Rococo with Impressionist brush strokes, the fourteen canvases present women exposing themselves. The series serves as a female take on the female nude, a topic that for centuries has been dominated by male artists.
The Hole
Closes on March 4th at 7pm.
312 Bowery, NEW York, NY 10012

Over the past three decades, Herrán has become known for his multifaceted practice that encompasses photography, installation, sculpture, and video. The works on view explore the phenomenon and legacy of the sicario (the hitman) in Colombia, namely their fascinating relationship to motorcycles.

This installation embodies the Cuban artist and activist Tania Bruguera’s notoriously complex relationship to authority. Combining milled sugarcane, video footage of Fidel Castro, and live performance presented in near-total darkness, Untitled (Havana, 2000) evokes the contradictions of life in the wake of the Cuban Revolution. The work was first presented at the 7th Havana Biennial in 2000 where it was on view for mere hours before being shut down by the Cuban government. The piece is now in MoMA’s collection.

By presenting byproducts from artists’ studios, things brought or left behind, and interviews with the participating artists the exhibition materializes the changing state of artworks and research in progress among artists in residence at ISCP. The group show is organized in collaboration with the Center for Curatorial Studies, Bard College.
International Studio & Curatorial Program (ISCP)
Opening Reception: March 6th, 6-8 PM
On View:  March 6 – April 28, 2018
1040 Metropolitan Avenue, Brooklyn, NY 11211

The Armory Show – Get ready for Armory Arts Week!

This year the Armory Show features 198 galleries from 31 countries. After several years of absence, blue chip galleries Perrotin and Gagosian return to the fair. And, Pearl Lam Galleries, one of China’s best galleries with outposts in Hong Kong, Shanghai, and Singapore will show at the fair for the first time. The Focus section is curated by Gabriel Ritter, Curator and Head of Contemporary Art at the Minneapolis Institute of Art and presents works that examine how technology has both mediated representation of the physical body and imagined its emancipation.
The Armory Show
VIP Preview: March 7th
On View: March 8-11th, 2018
Piers 92 & 94, 711 12th Avenue at 55th Street, New York, NY 10019
Tags
anna mikaela ekstrand armory arts week new york proxyco the hole vanessa prager