A Look at Chinatown Soup’s Newest Exhibition, “A Dichotomy of Desire”

In a city as large and sprawling as New York City, it can be difficult for up and coming artists to develop relationships with gallerists or to find grant support to get their projects off the ground. This is where 14×48 Public Arts Project, an arts non-profit sponsored by Fractured Atlas, comes in. With their keen curatorial eye, 14×48 helps make public art more accessible by connecting artists with vacant billboards all around New York City.

While riding down the BQE, 14×48 founders Sharon Madanes and Ben Beinecke were taken aback by the vacant billboards and open spaces they passed. Since the advent of the Internet and social media, much advertising has moved online. The mission of the non-profit grew out of the desire to give these blank billboards an opportunity to showcase some art. To date, 14X48 has already worked with over twenty different artists.

I had the pleasure of sitting down with husband-and-wife powerhouse and founders of 14×48, Sharon Madanes and Ben Beinecke, who were able to share some insight about billboards as a medium, the fluid concept of the “emerging” artist, and the future.

Alexandra Israel: What are some of the challenges that 14×48 faces when securing locations, and do you feel some of the locations are better fits for some artists than others?

Sharon Madanes and Ben Beinecke: Pairing locations with artists’ projects is one of the hardest things about 14×48 logistically and conceptually. Because of the nature of advertising vacancies on billboards, we often have two weeks or less between receiving vacant billboards available for posting and installation. This creates a real challenge for the artists, whose projects can only loosely be site-specific and whose audience engagement programming needs to accommodate variation in posting location, and creates a challenge for us as we try to determine the best project-location fit in a short timeframe. 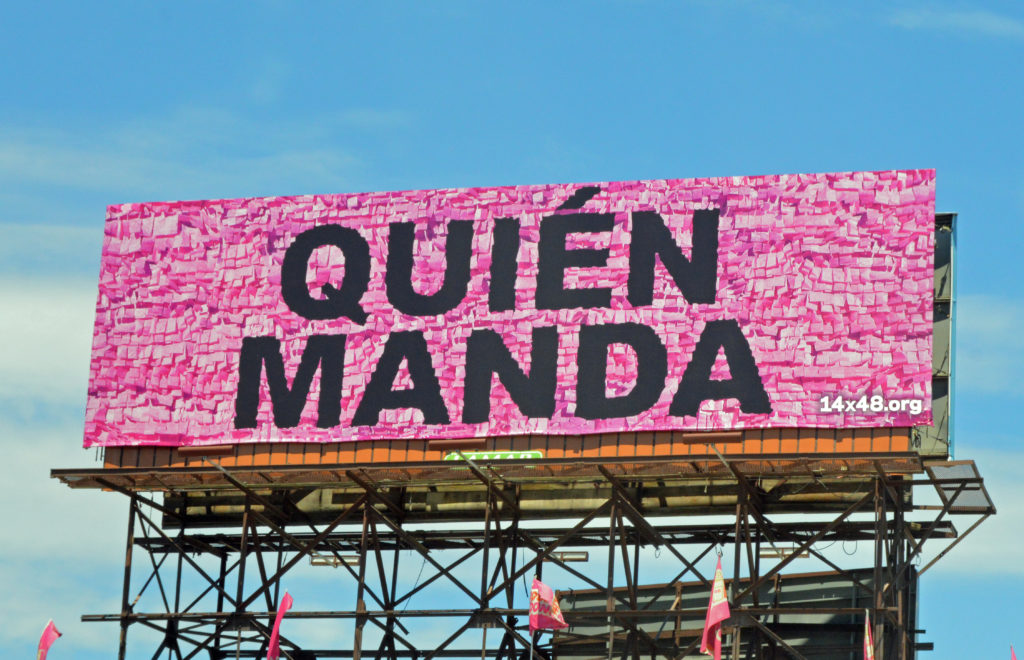 “Quién Manda,” Giovanni Valderas. Photo courtesy of the artist and 14×48.

It’s interesting as billboards used to be the main way that business communicated to the public about new products with eye-catching images but now, of course, with the advent of social media much has moved online. 14×48 ever consider doing a public art installation that wasn’t on a billboard?

14×48 has evolved during it lifespan and it will undoubtedly continue to do so. The organization is not about billboard’s per se, they just happened to be a fitting medium for what we were trying to accomplish. I can imagine a world in which some technologies we now think of as cutting edge become fitting mediums for 14×48 projects because they’ve become partially obsolete. On the other hand, billboards are a nice fit–they’re a physical feature of most American urban environments, with an interesting history, and they appear to have some staying power. They also create a challenging set of constraints around public/audience engagement for artists to contemplate in their proposals. 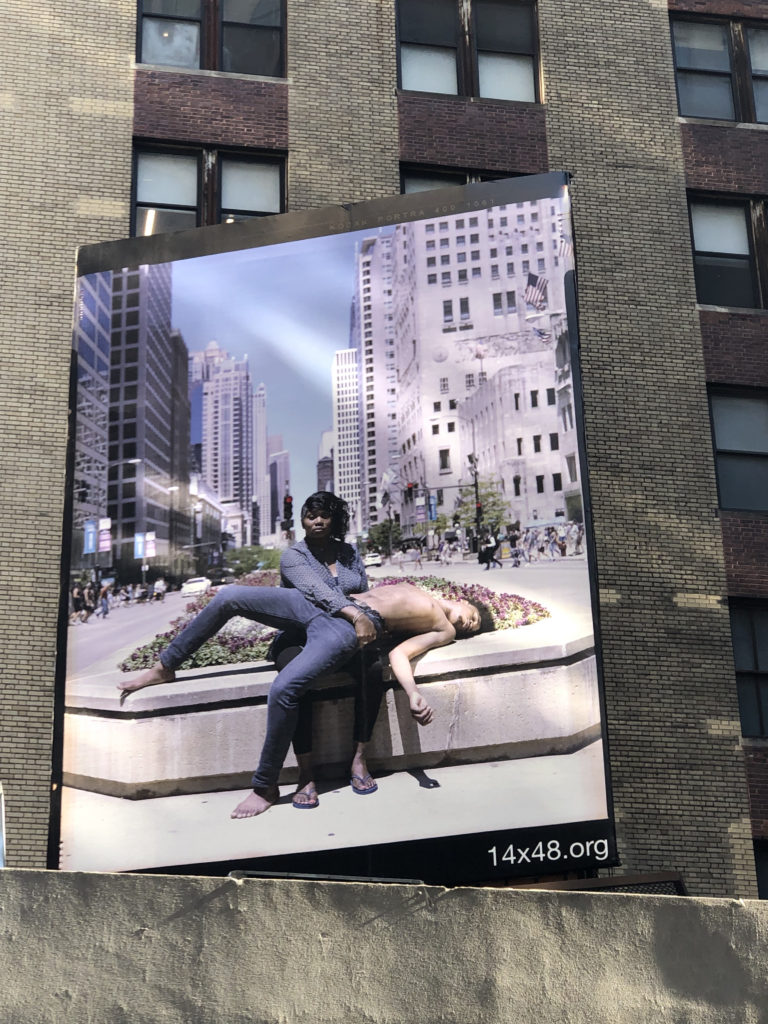 The most recent billboard, “Untitled 19, Magnificent Mile, IL.” by artist Jon Henry just went up recently. Can you tell us a little bit more about this project?

Jon Henry’s work is arresting. We’re thrilled to be partnering with him this season. Henry’s photograph “Untitled 19, Magnificent Mile, IL” captures a mother holding her supine son across her lap in a haunted embrace. The image is part of Henry’s photographic series, “Stranger Fruit,” which he began in response to police violence against African-American men. The series draws on the visual language of the pietà, a sculptural motif of the Virgin Mary cradling Jesus’s limp body in her lap, in order to capture the tragic eventualities faced by so many families of color. In this case, picturing his subjects on the Magnificent Mile, Chicago’s high-end shopping district, Henry emphasizes that no one is immune to these tragedies and their rippling effects.

Henry stages these scenes—the mothers he pictures, who come from cities and towns across the country, have not actually lost their sons—but his images evoke the stark reality of a nation where this type of loss is unintelligibly common, where all African American communities are directly affected by racial profiling and police violence. His project poses a broader question: what does it mean to live in a society where parents are unable to protect their children? 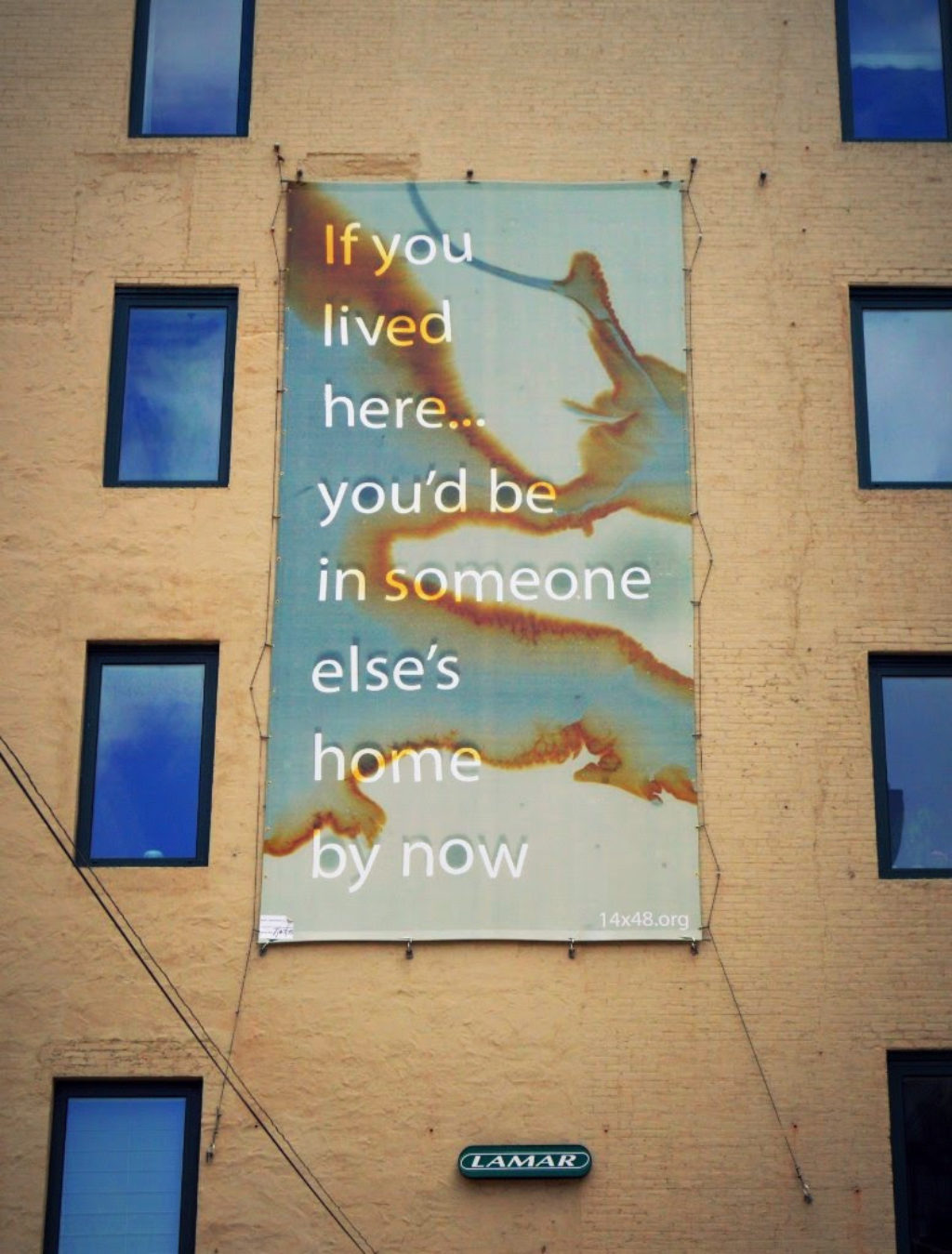 “If You Lived Here…You’d Be in Someone Else’s Home By Now,” Anthea Behm and Avi Alpert. Photo courtesy of the artists and 14×48

The term ’emerging artist’ is generously used in the art world, sometimes interchangeably with ‘established,’ depending on who you ask. When you are looking at submissions or considering projects, how do you assess who is and isn’t an emerging or mid-level artist?

14×48, like many organizations, was founded out of a frustration with not seeing what we thought should exist in the world–in our case, a place for emerging artists in public art. Which artists are ‘emerging’? We didn’t have a definition then (we still don’t) but unofficially they’re the artists whose work is credible but underrecognized. These are artists who don’t have sufficient resources or opportunities to create public art.

In order to keep ourselves true to this aim, our Selection Committee operates by a blind review (applicants’ personal information is anonymized) and only receives applicants’ CV’s after the merits of each proposal has been assessed. In addition, we think it’s important to provide applicants with constructive feedback from the Selection Committee’s evaluation so that even if their proposal isn’t selected, the process has still hopefully been somewhat fruitful. 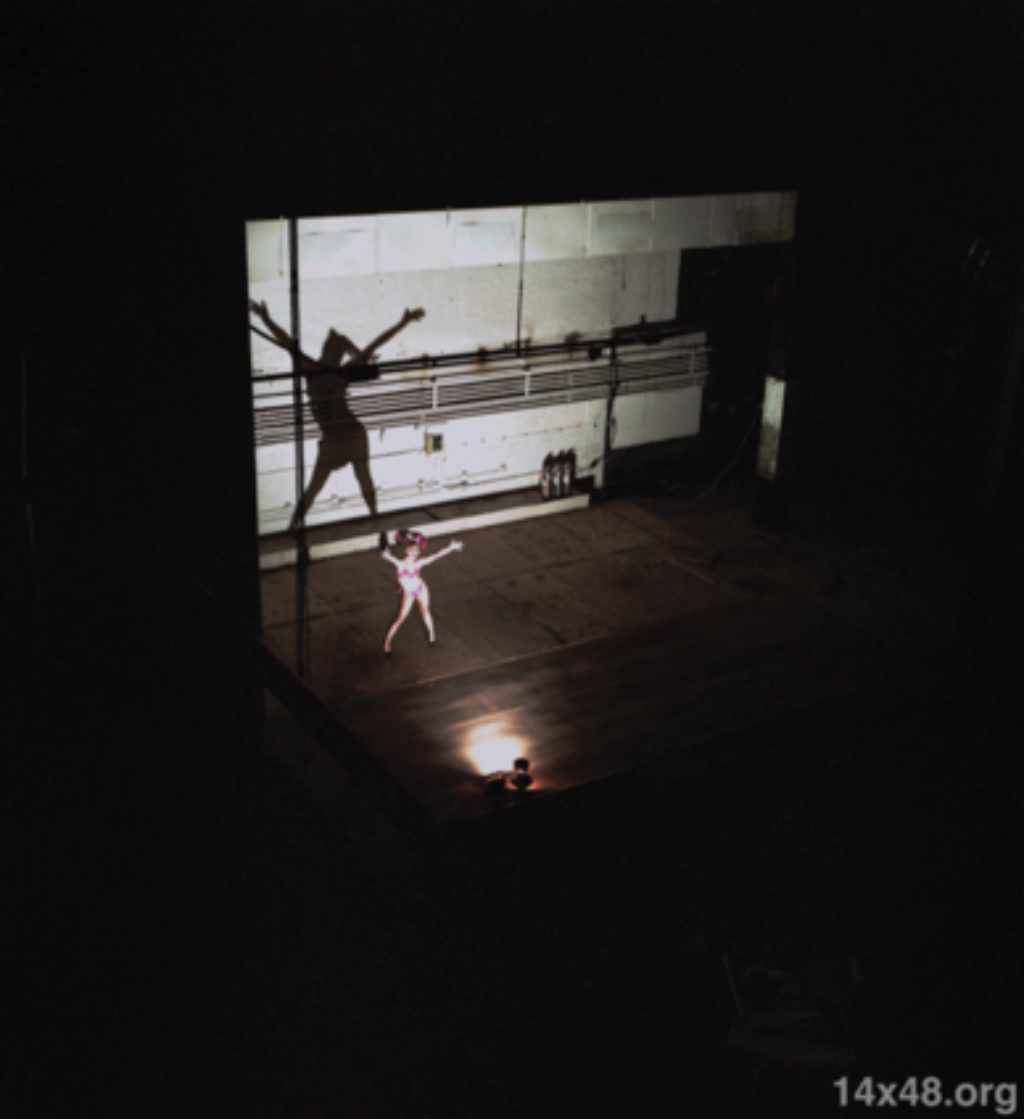 “The City on Stage,” Lisa Kereszi. Photo courtesy of the artist and 14×48

It can often be hard for emerging artists to break into the art scene, and I’m sure that 14×48 receives a ton of submissions when the Open Call comes around. Can you give me some insight into this process?

Yes, we’ve found that the quantity and quality of submissions increases every year, which naturally makes the selection process hard. Many proposals have either interesting ideas that are unsuccessfully manifested in the accompanying artwork or really compelling artwork that is unsupported by a thoughtful proposal which, according to our criteria, must include a way to engage with the public in a meaningful way beyond the billboard itself.

Do you have any advice for artists who are interested in 14×48?

Each year we select 2-4 proposals to post in the upcoming year. Our Open Call happens once a year in the spring (typically the deadline is the end of May). We’re always looking for people to help spread the word about 14×48 generally and about the Open Call specifically to new communities that don’t yet know about the opportunity. While we ramp up for our next Open Call, we’ll be posting the last two billboards from the previous open call season, which we’re super excited about. More to come!

The current billboard, “Untitled 19, Magnificent Mile, IL” by Jon Henry can be seen on the northwest corner on 38th and 9th through April 9th, 2019.

Jon Henry and writer Antwaun Sargent will be discussing the effects of police brutality on black American families and communities on Tuesday, April 9 at The International Center of Photography. More about the event can be found here.