Agnieszka Pilat is a Polish painter based in San Francisco. In Pilat’s studio, the aesthetic of the sunny and healthy propaganda posters of the Soviet Era with an air of Dutch still life, and European aristocratic portrait tradition resulting in vibrant and sometimes extravagant renderings of her subjects, machines. However, her work is so much more than a catalyst for art historical influences. Instead, they channel the tension between human and device. Machines are integral parts of our personal and public lives and as we shift from hardware to software, interfaces become increasingly humanized. She rediscovers old machines while posing acute questions about the character of new software. One of the main benefits of art is that it can bring perspective; Pilat’s work plugs into the increasingly powerful industry of tech, in new and unexpected ways.

A desire to tell stories drew Pilat to the arts. It wasn’t until 2013, when Pilat moved to San Francisco, that the artist began to pursue the arts with more focus. With aspirations to create graphic novels, she trained as an illustrator. “I felt that I needed to be a masterful fine artist to create a good graphic novel,” she said when I asked why she shifted to painting. Obsessively she developed her figurative painting technique. Soon she discovered that painting was an apt enough medium to tell her stories. 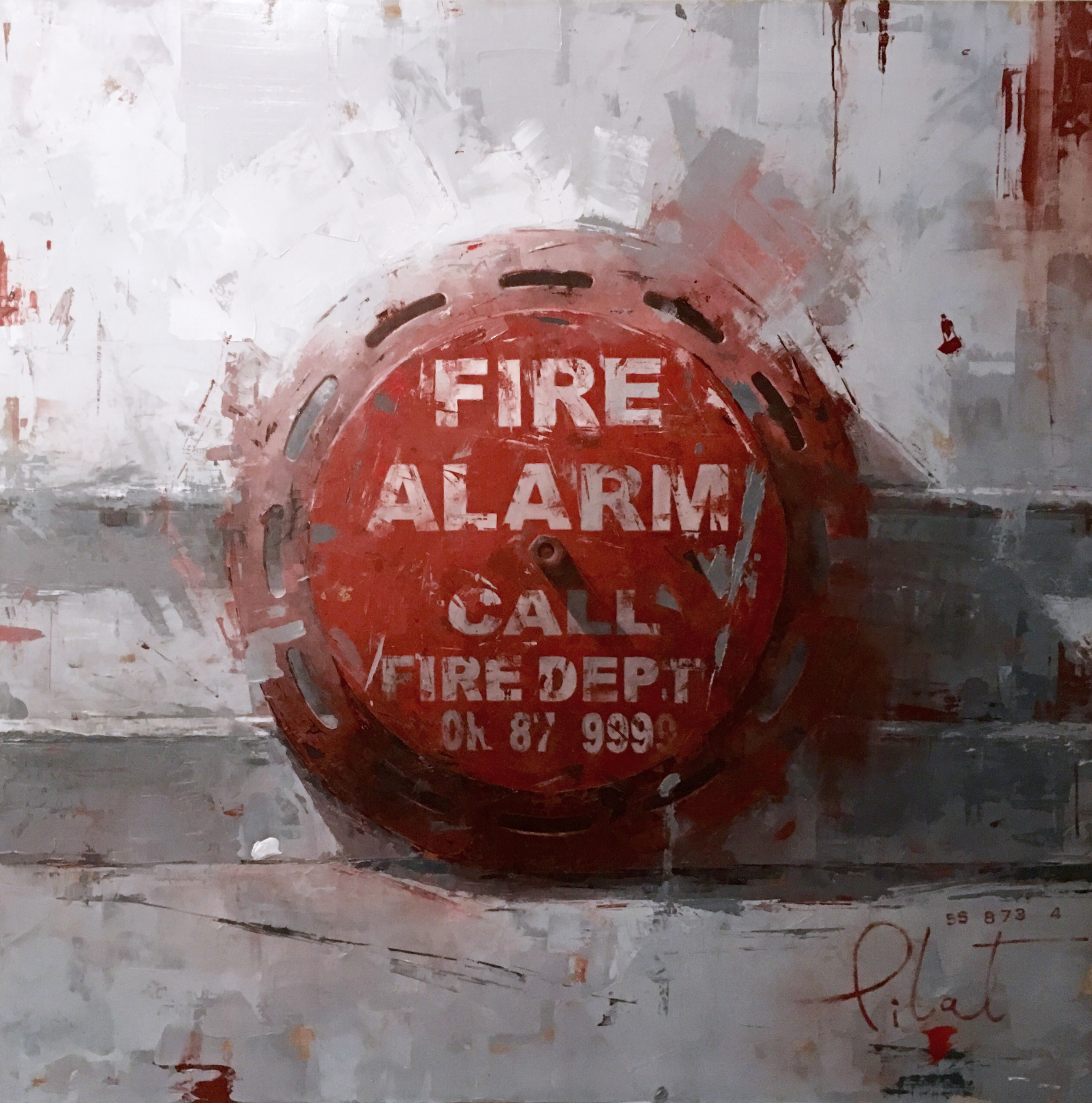 Previous: The artist with her works on display at Google X. Above: Agnieszka Pilat, Red Paul. Oil on board, 48×48 inches. All photographs courtesy of the artist.

A good story often comes from an unexpected source. Paul Stain, a managing partner at SKS, commissioned Pilat’s first machine-portrait. SKS is a managing partner at a real estate development and investment firm that specializes in renovating historical buildings while preserving some of their historical features. Notably, SKS co-developed Airbnb’s headquarters. “I like the way you paint. Why don’t you paint something from my office that you like?” he asked Pilat. In his office, she found an old fire bell and painted its portrait. The work, titled “Red Paul,” became a pivotal painting in her career and the first in a series of great stories.

Merging tech and painting came naturally to the artist. Pilat grew up in Lodz, a city scattered with dilapidated factories and old machinery. By adding elements to humanize the machines, Pilat brings our attention back to them. Using playful colors and even adding fashion garments she makes her subjects more relatable. Unsurprisingly, collecting old machines is popular amongst the tech-savvy elite in San Francisco. As they ideate technology to propel, machinery that helped shape our contemporary world become markers of status. Through Steve Jurvetson, the venture capitalist that sponsored Tesla and Space X, Pilat gained access to artifacts from NASA and Sputnik. The visible storage at the Computer History Museum has also been an important resource to the artist.

We are defining ourselves through technology. Whoever holds the reigns to technology are the new aristocracy.

“We are defining ourselves through technology. Whoever holds the reigns to technology are the new aristocracy,” she tells me. San Francisco has its fair share of patrons of the arts, Andy and Deborah Rappaport and Pam and Dick Kremlich are a few that Pilat respects greatly. But, as San Francisco continues to gentrify, art patronage remains stagnant. Those who are up-and-coming in the tech world in the bay area spend their money on experiences and travel, instead of donating money to the city’s art institutions or buying art. Another factor is that although there is a lot of money in tech, the industry is capricious, with start-ups going bankrupt every day. Some companies have dedicated art collections, but leading art advisors run them. This means that local artists must compete with the global art market to become collected. Therefore, the problem afflicting San Francisco’s art world is what to do to get this unstable class of “new aristocracy” excited about art. 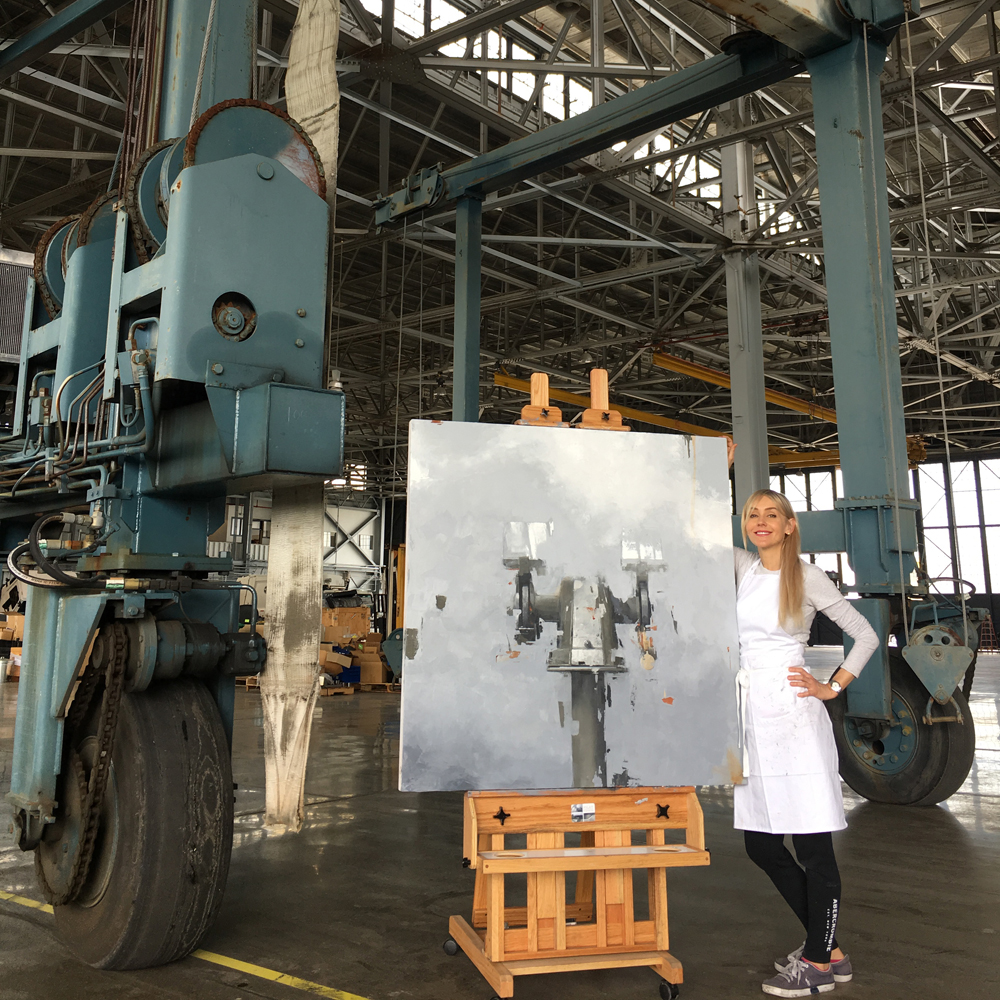 Agnieszka Pilat at her residency at Wright Speed.,

Pilat has come up with her own solution. “I have a special niche as I paint tech,” the artist says. “I seek out opportunities to talk to leading figures in the tech field about the products that are changing the world.” By approaching corporations, institutions, and major players in tech in order to gain access to their machines, she has set-up several artist residencies. In 2017, she spent time at Wrightspeed a company that designs trains founded by Ian Wright, one of Tesla’s co-founders. Their headquarters in an airplane hangar in Alameda provided her with a large workspace. A luxury in San Francisco which now boasts the highest rents in the country. By going where no artists have worked before, Pilat has created her own sustainable eco-system creating work side-by-side with the workforce that propels the tech industry forward. This solution has the double benefit of giving her access to tech-objects and getting the community curious about her work. 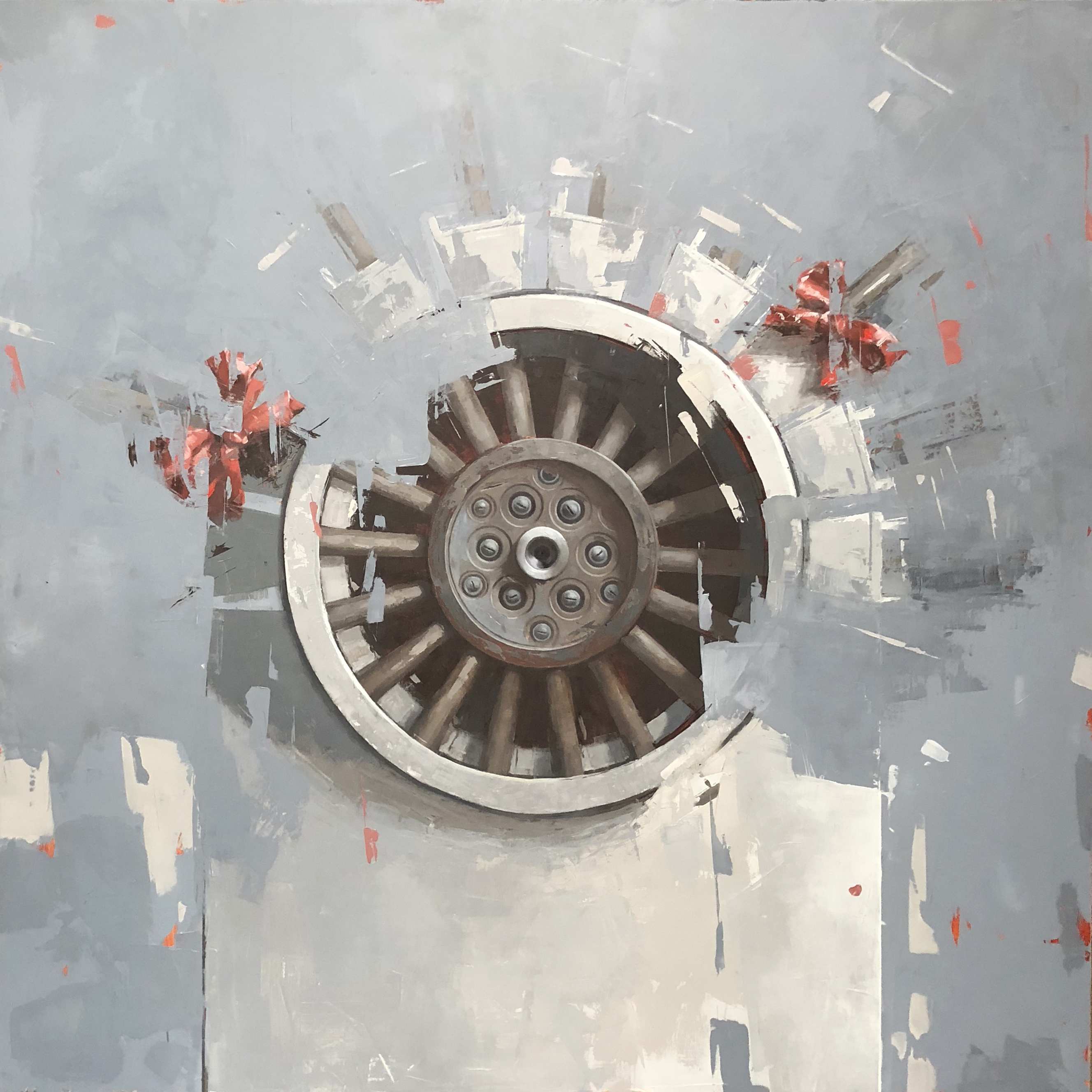 Most importantly, Pilat’s re-imaging of machines and their identity has the possibility to make a mark on the predominantly male-dominated tech industry. “As an artist, you always try to be aware of what is going on culturally. I don’t want to create propaganda art I want to open a conversation,” she says. In many of her works, she ascribes a female gender to the machine. During Women’s History Month she was invited to speak at a Google X event where she presented her portrait of “Amazing Grace,” a portrait of a Univac Mercury Delay Line Memory Tank (1951) wearing two red ribbons. “They were saviors, machines that worked for us,” she says about the machines she portrays.

Despite her apparent resilience, she, like many artists is plagued by insecurities about her work. “I struggle with the divide between figurative and abstract work and sometimes I ask myself if painting is dead. But, I think [figurative] painting is honest,” she says before she quotes Lewis Mumford “the message is the medium.” 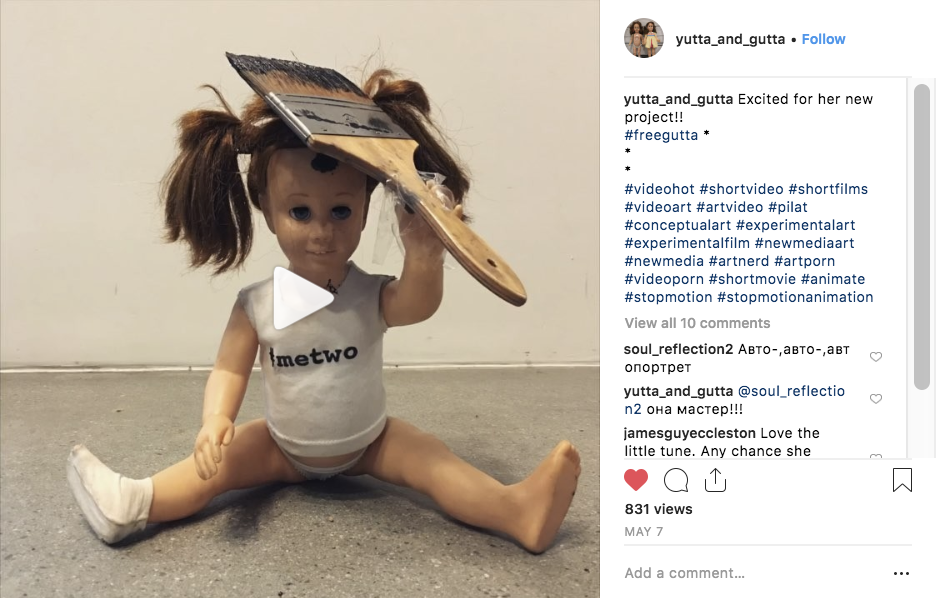 To combat artistic insecurities and perhaps also to take her mind of painting, Pilat has created two alter egos that serve as an extension of her artistic practice. Yutta and Gutta are two vintage “Chatty Kathy” dolls, talking dolls produced by Mattel between 1959 and 1965. Pilat brings them to events, they have their own Instagram handle, and they even make their own artwork. (Disclaimer: it is mostly conceptual and, quite frankly, pretty bad – which is what makes the project so good.) At first, Yutta was an Instagram driven idea. Pilat wanted a creative outlet that was more playful and free than her painting practice to help her stay connected with her followers on a more frequent basis. But, I detect that there is more to the story. 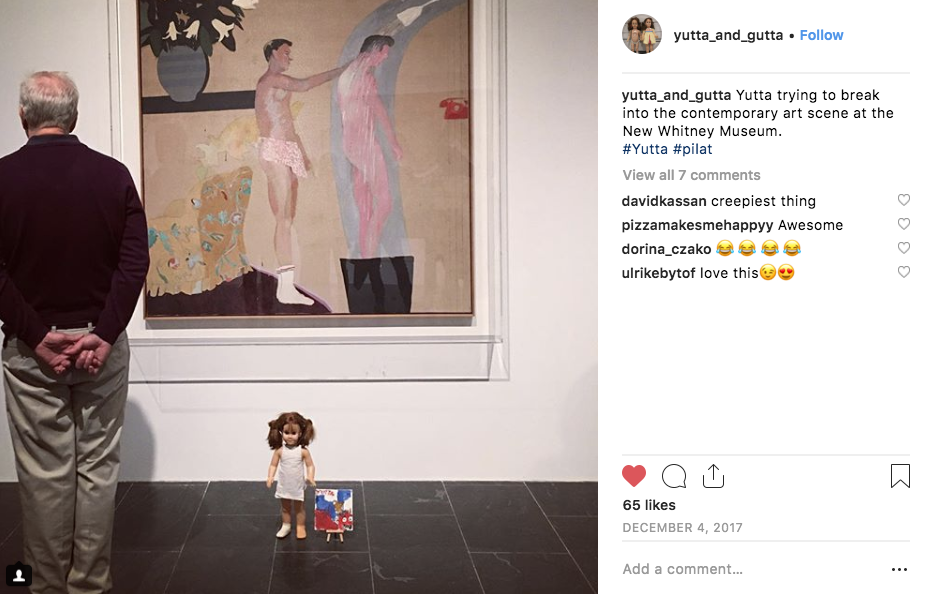 “In Eastern Europe, it’s important to be ‘normal.’ You must be pretty, smile, and be pleasant,” says Pilat, who spent most of her life in Poland. Yutta and Gutta are also a way for Pilat to move away from constraining gender norms. Silicon Valley and the Bay Area has been critiqued for its marginalization of women, however, Pilat has with grace found a place amongst male executives, people she sees as peers. Alongside Pilat’s paintings that feminize important machines of the past Yutta and Gutta, who are seen in #metwo t-shirts, are spokes dolls for going against the grain with childish joy.

The artist’s choice in gallery representation also reflects her support for women and a dynamic approach to the evolving art market. Pilat is signed with ATO Gallery, a pioneering online art gallery that makes art data transparent allowing more people to engage with the art market. This, they predict, will increase the global pool of art collectors. “Our presence is destroying the barriers to entry in the art market. The ATO Platform will be the first blockchain ecosystem to allow art collectors to buy fine art and artists tokens; accurately track sale prices and protect against the emergence of a counterfeit market,” Carrie Eldridge, ATO’s founder, comments. The gallery made a splash in both the crypto and art world when a painting by Benjamin Katz was sold for 150 Bitcoin, the equivalent of US$1,25 million. It was a record price for an artwork bought with cryptocurrency.

Not only preoccupied with the past, Pilat is now struggling to paint new technology. “How do you detect an identity that isn’t yet formed?” she asks me. On canvas, she is trying to find the identity of a new self-driving car she has been commissioned to paint for John Kravcik, the CEO of Waymo. Having gone through 10 variations, she calls the project her version of Jay DeFeo’s “The Rose.” The artwork, now owned by the Whitney Museum, took the Defeo, a Bay Area painter over eight years to paint. When she was evicted from her apartment, the painting was lifted out with a forklift and subsequently toured many prominent museums in America. About her new commission, she says: “It is a story and a process. An overlap, of sorts, between a painting and a graphic novel.”

We are living in a polarized society where access increasingly is the key to success or, at the very least, survival. I am impressed by Pilat, who fairly recently arrived in San Francisco to pursue her career in art and who, as an artist, has managed to break into the male-dominated tech-world not only to create opportunities for herself, but also for other artists. Now, other artists can follow in her footsteps as residents at the companies that she has forged relationships with. Pilat told me that her “stretch-goal” is to join Space X as an artist-in-residence; I believe that she will reach it sooner than she thinks.

The artist is represented by ATO Gallery.

How Twitter Promotes Black People on #AWallForACause, An Interview with Dominique Duroseau