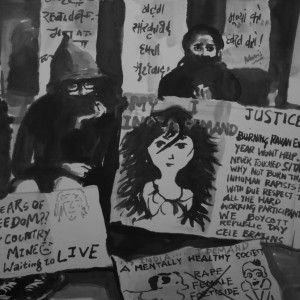 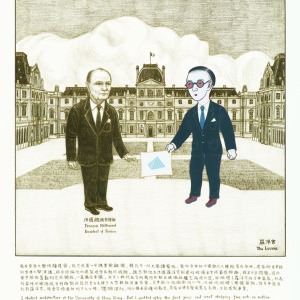 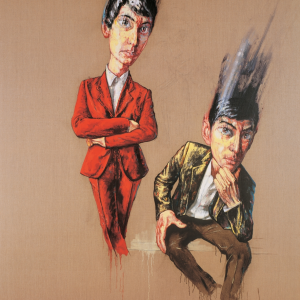 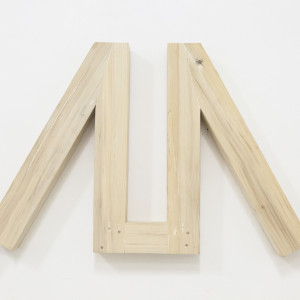 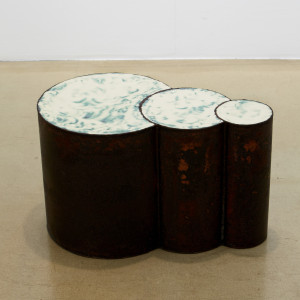 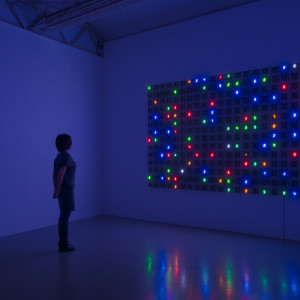 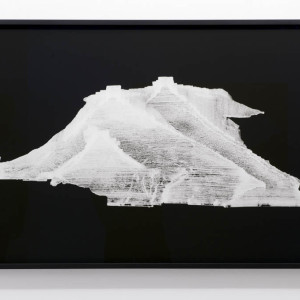 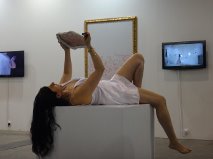 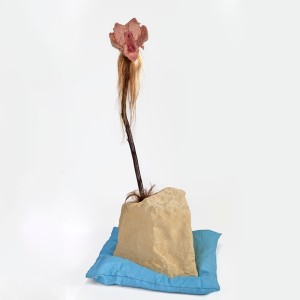 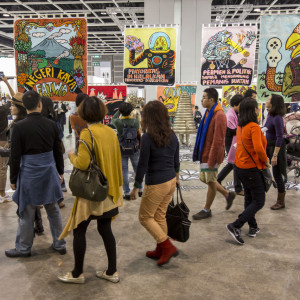 When Hong Kong International Art Fair (Art HK) launched in 2008 a debate arose on whether or not the city could sustain an international art fair.  In the 1990’s a fair had been held prematurely. Art Basel Hong Kong this past week was larger than ever with 233 participating galleries from 37 countries showcasing around 3,000 pieces attracting the international art set, blue-chip galleries, collectors and museum directors from around the world. Drawing a total of around 65,000 visitors. Those who were first skeptic to Hong Kong’s ability to sustain an art fair have surely been proven to be wrong.

Only in it’s third edition the waters are still being tested – Art Basel bought Art HK in 2005. The fair was moved from May to March. It now fits comfortably between Art Basel Miami Beach in December and Art Basel Basel in June. Some say it was a smart move to get ahead of Art Dubai others are just thankful to dodge HK’s humid May weather. Straying from the classic Wednesday-Sunday quotidian the fair runs Friday-Tuesday. Malaysian Adeline Ooi previously VIP relations manager stepped down from her position as director of RogueArt to take over director of ABHK after Magnus Renfrew. Renfrew is the founding director of Art HK who has been instrumental in making HK center of the art market in Asia. Renfrew is returning to Bonham’s. Many were also happy to welcome Art Central, a new satellite fair on the harbor front in Central – one of the 150 events happening in and around the fair during Art Week’s eight days.

To benefit from the location of the fair I was especially interested in art referencing the cultural heritage of the Asia-Pacific region. I was mesmerized by a poignant series of 40 ink paintings by Chen Shaoxiong at Pékin Fine Arts, the artist methodologically recreates photographs of political expression he finds online from modern day demonstrations across Asia and the world. Ink Media #1(2011-2013). Reputable Hong Kong gallery Osage showed a 17 piece series called the Cultural Life of Wilson Shieh by the artist of the same name who created the work in his Faton studio. It depicts portraits of men that have shaped his cultural life an eclectic mix from east and west, fictional and real, historical and contemporary. Author Haruki Murakami, Ian Curtis from the Joy Division,
architect I.M Pei, Taiwanese top-selling artist Hou Chun-Ming alongside the child of superhuman strength, Kintaro, from Japanese folklore and Le Petit Prince the French fictive children’s book character. Acquavella Galleries had the most impressive large-scale Chinese painting, Portrait 08-1(2008) painted by Zeng Fanzhi.

Kwangho Lee’s copper tables with hypnotic Korean enamel table tops in the realm between natural and supernatural named The Moment of Eclipse(2014) at One and J. Gallery is design worth mentioning. The Korean designer has been showcased at Design Miami and collected by M+, Daegu Art Museum and SFMoMa. The accompanying bench clad in woven royal blue polyester was an eye catcher. I hope to see more of his work in the future.

It was a thrill to see Nam June Paik’s Internet Dweller (1994) at Hakgojae Gallery from Seoul. The piece is comprised of old monitors, cables and other technology it references to the history of technology. Less conceptually complex but technologically intricate are Tatsuo Miyajima’s Ikegami microcomputer installations which are all the rage, there were a couple scattered throughout the fair the largest measuring close to 2x3m Life (rhizome) no. 2 at Tokyo based Gallery Scai The Bath House.

While chatting about Patricia Piccinini’s Metaflora(2015) – a delectable merge of nature and the human body – with Melbourne based Tolarno Galleries director Jan Minchin told me that the now seasoned gallery have showed in Hong Kong for six years, during the first fair they did no business at all, at the second they sold to expats hailing from the pacific region and during 2012 their collector base opened up across the region with buyers from mainland China and Indonesia. Many galleries do not sell during their first fair but all see the benefits of pruning the Asian market.

Athr Gallery based in Jeddah showcased Dana Awartani who is based between Saudi Arabia and the U.K. currently studying traditional Islamic art practice with a master in Istanbul. The drawings on view clearly reference geometric forms of Islamic art but also minimalism. A group of 15 Saudi’s had just been by the booth earlier and several of her pieces sold. “Being a woman has not encumbered me in my artistic career,” she says and tells me that the mixed gender openings at the gallery in Jeddah are usually raucous affairs, similar to western openings, minus the wine.

Hassan Sharif brought conceptual art to the United Arab Emirates in the 1980s, at a time when the country was becoming increasingly commercialized. Eight Points Angular Lines glorifies the simplicity of form, it is a wood relief evolving from hundreds of variations of subtly shifting shapes on paper, some on view at Gallery Isabelle van den Eynde.

London-Istanbul based Pi Artworks is also dedicated to a single artist. They are showing Berlin-based performance artist Nezaket Ekici. Ekici is trained under Marina Abramovic and uses her body to comment on femininity. Videos, performance ephemera like a dress and photos were on view. The artist also performed Emotion in Motion during the first two days of the fair, planting lipstick kisses on select objects in the space her lips bloodied at the end of the day – at first it looks quaint then it becomes painful to watch.

A newcomer to the fair is Paris based Air de Paris a favorite of mine, in addition to Sarah Morris, Carsten Höller and Claire Fontaine they have a spellbinding piece by Japanese artist Shimabuku on view City in the Sea(2013). What if piles of salt crystals are the blue prints of ancient pyramids? Is the question, which the artist bases his whimsical piece on. Director Florence Bonnefous tells me that the ink jet print was shortlisted by M+ acquisitions team. A state funded museum venture aspiring to become Asia’s leading museum for 19th-20th century visuals arts headed by Lars Nittve.

100 Tonson based in Bangkok was the first gallery from Thailand to be admitted to Art Basel HK. Their booth was dedicated to a large scale allegorical street art inspired painting commenting on Thailand’s current political situation, the artist Yuree Kensaku is collected by Yokohama Museum and Mori Art Museum.

The fairs section dedicated to presenting large-scale. Proposing that we “invite possibility from impossibility to imagine another world”the curator has Alexie Glass-Kantor has made a selection of pieces. Among them Indonesia artist Eko Nugroho’s large-scale tapestries grounded in traditional batik and embroidery styles, graffiti, street art and comics of political commentary do just this.

The Immigration Forecast(2010) was screened daily. The Greek artist Raed Yassin’s work reports on the dangers that illegal immigrants face as they cross boarders between the Middle East and Greece. A thought-provoking piece as millions of Syrians and those affected by ISIS seek refuge. Another deceivingly humorous piece was EXERCISES, a spin-off of “Rajio Taisou” Japanese Radio exercises. Issuing Japans high suicide rate amongst the young and other ailments of the mind. The artist Hiroko Akada is represented by Mizuma Art Gallery, who featured interesting work by Ai Wei Wei and Indieguerilla in their booth.

The VIP program does not include any private collection visits but as a consolation work from four prominent Taiwanese collectors  are on view at Hong Kong Art Centre’s exhibition Collectors’ Contemporary Collaboration (CCC). It is an annual collaborative exhibition showcasing highlights from Asian Private collections, well worth a visit.

Art Basel Hong Kong is absolutely a fair that you must visit. It is an exciting meeting place; a fairground where Asian collectors gain access to galleries outside of the region on their home turf and European, American, African, Middle Eastern get a condensed glimpse of what the top galleries from Asia and Australia have to offer.  The location is not that bad either – amazing food, lovely views and the possibility to take an escalator up a few blocks instead of walking!

Luke Willis Thompson: The Highlight of the New Museum Triennial That You Probably Missed 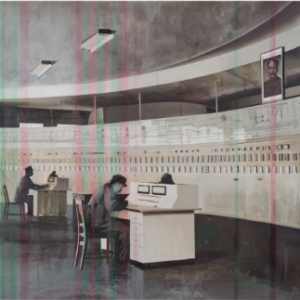