Agnieszka Pilat: The Artist that Became the Darling of SF’s Tech Elite by Humanizing Machines 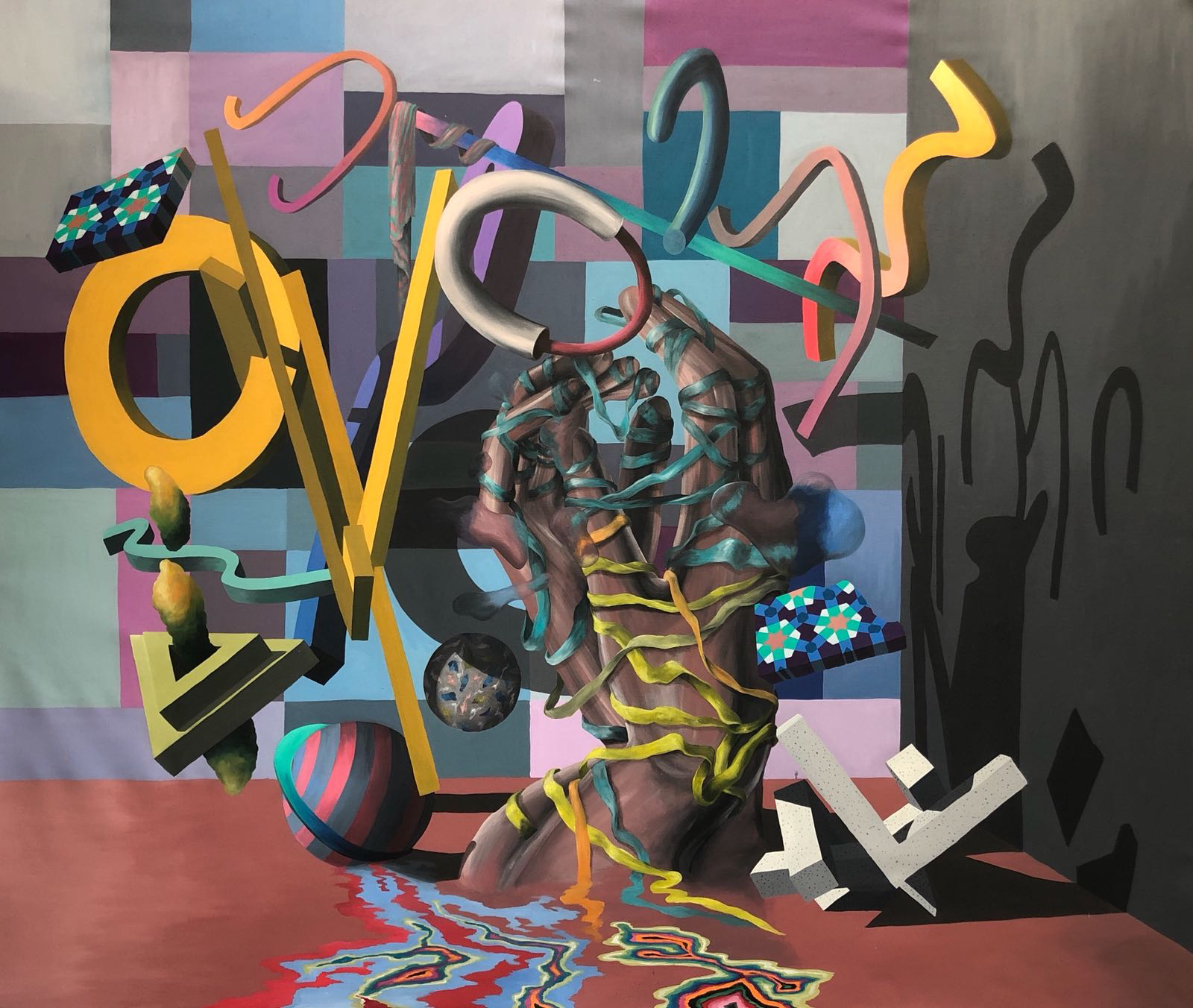 Athier Mousawi (b. 1982) is an Iraqi artist…but that’s not all he is. Teacher, global citizen, and genteel boundary-pusher asking life’s big questions, his work holds as many possibilities as it does references.

The latest Mousawi show here in New York is located on the first floor of ArtX in the Arab Street Artists’ Majlis group show and residency. The artist’s works are on view in a pan-Arab showcase alongside variant curations commenting on everything from ISIL members to the ritual of tea as cultural exchange in the Middle East. His grand-scale use of the exhibition room has a sense of perpetual motion which deviates from the overtly darker dialogue around marginalization and uncertainty of a region nevertheless in flux. It’s not that the paintings are apolitical per se; it’s just that these works are concerned with so much more than being socio-politically subversive. To that same end, the project is co-organized by Edge of Arabia, a non-profit social enterprise that promotes educational exchange between the Middle East and the western world.

Born in London to Iraqi parents, Mousawi’s family traveled from London to Paris, to Baghdad and back by 1990 to flee the burgeoning conflict. He spent his adolescence in the UK, feeling part of multiple communities and navigating identities and experimenting with film storyboarding, music video production, and graphic design. Viewers may spot the retro ideas of these early foundations of so-called ‘futurism’: 1980s music video aesthetics and even glimpses of early computer art are articulated in the compositions.

There is also the concept of decorative Arabic script as an element of inspiration. One of Mousawi’s first shows featured amalgamations of British words in Arabic script. ‘Toast, butter, and jam’ in Arabic were as ornate as they were social commentary a la Western artists Christopher Wool and Ed Ruscha. This kind of work took a page from Hassan Massoudy (b. 1944), an Iraqi artist working in Paris and a family friend, whose calligraphic script takes on a life of its own in watercolor ebbs and flows, ultimately stripping the word of literate meaning.

Another connection from these foundational years remains Riz Ahmed, the celebrated actor and rapper who is constantly reconciling his Pakistani and British backgrounds. Mousawi leveraged these formative experiences in 2011 overseeing the National Portrait Gallery student exhibition, which featured British students (from a wide range of ethnic backgrounds, including Somali and Afghani) expressing both their heritage and national pride. 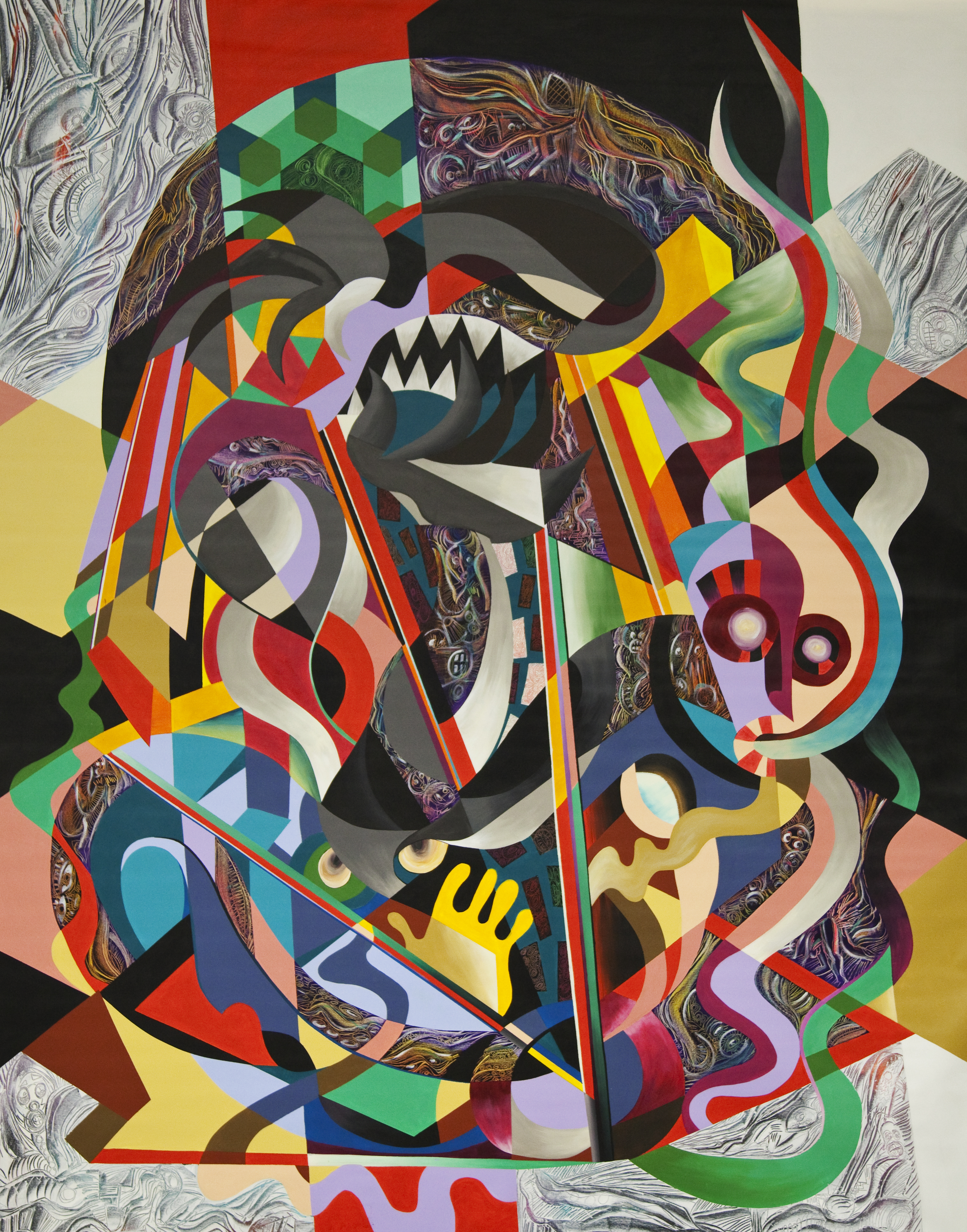 Following his education and experimentation in England, he left impulsively for Paris, where he is based today. Paris welcomed him at the Cite des Arts, a state-sponsored utopia for artists from around the world to live, practice, and exchange. From there, he was able to show work in Dubai, do an artist’s residency in Istanbul, teach art to Palestinian refugees in Beirut, and maintain his ties to both the UK and Iraq. One noteworthy exhibition was After Denudation (2016) which involved the use of sand to provoke thought around regional conflict, as well as questions of particle size in composition. Another, Man of War (2014) looked at the interplay between jellyfish and conflict, addressed the fascination with conflict in the Middle East.

Inevitably, however, artistic heritage supersedes nationality alone. His father works as an architect in Iraq, and his mother is predominately focused on sculpture in her artistic practice, perhaps initially responsible for his lifelong fascination with space. Mousawi’s paintings are officially two-dimensional acrylic on canvas, but the shapes defined within them take on a deeply sculptural quality. Yet when asked if he would ever venture into the territory of making sculptural work, Mousawi is vehemently opposed.

“People have asked why I don’t go into sculpture with this work,” he said, “It’s been a constant question because it’s getting more and more spatial. For me, sculpture is way too defining. As soon as you’ve set a material to sculpture, it is that material. If you put it in bronze, it’s a bronze. If you put it in marble, it’s marble. If you put it in foam, it’s foam. With this, you can just give it a different color treatment and you imagine it as being a color. These are basic rules of painting, but I just don’t think we think in reality. Our thoughts are, by nature, super abstract. And so when I’m trying to capture them, gravity doesn’t exist in my end…it’s outside of the way we think. When I’m trying to grapple with an idea, when I’m trying to visualize something, I don’t think an intrinsic reality should govern how I’m making it.” 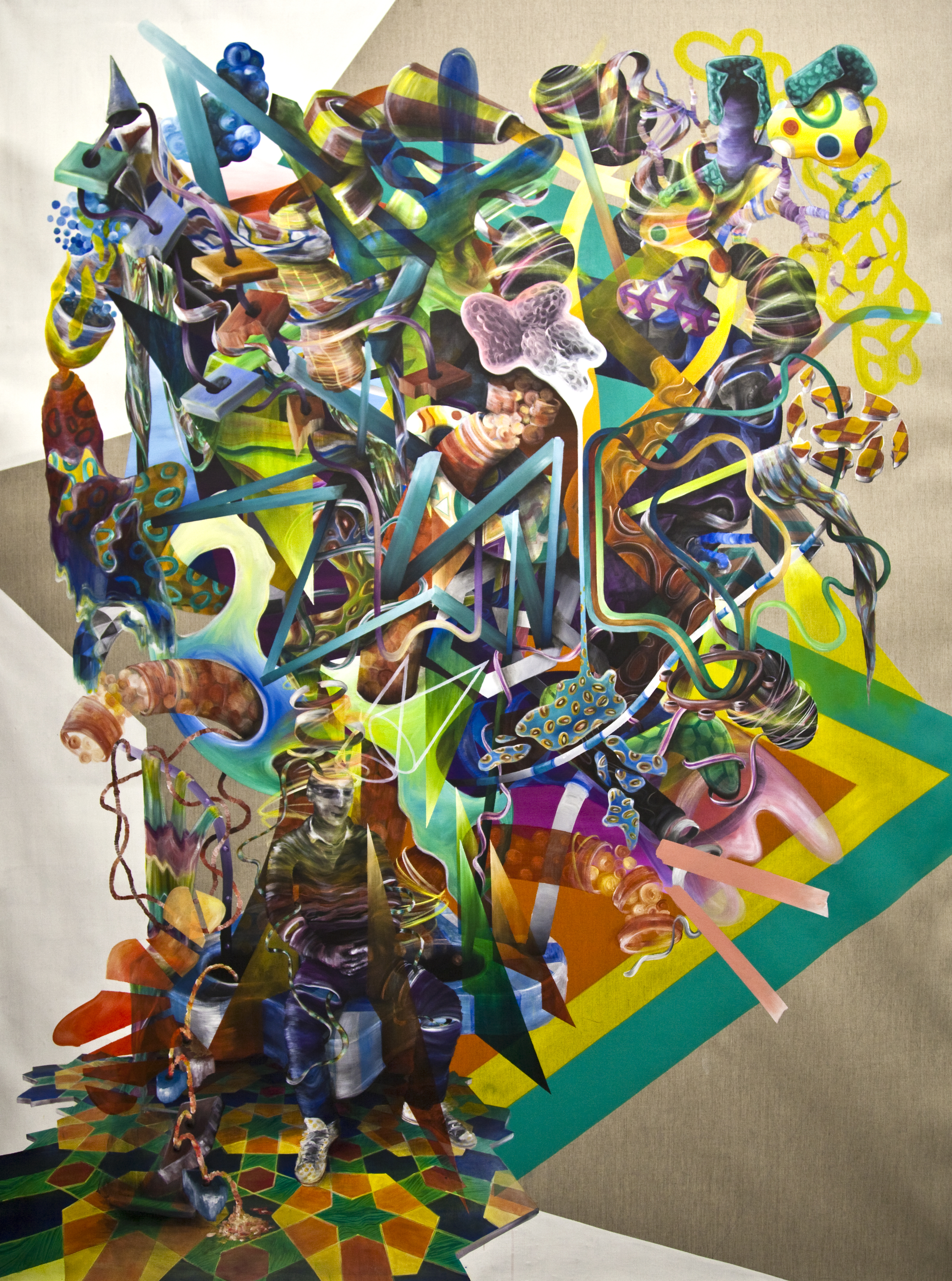 Mousawi further cites Memphis design as a defining inspiration: the electrifying colors and furniture of post-1981 Milan are definitively apparent and striking in the work. Iraqi geometrics sneak into the abstracted compositions on the furniture as well, grounding them in trompe l’oeil-style geometric surprises. These shapes do evoke other design-heavy moments in the Western canon as well, particularly prevalent in the works of Jugendstil artists Josef Hoffman’s stripes and Gustav Klimt’s Eastern textiles in his portraits of women.

Athier Mousawi is married to Sara Naim (b. 1987), a Syrian photographer born in London and raised in Dubai, represented by the Third Line. Together, they share a passion for the near-mythological quality of their nostalgic respective homelands, and sense of borderlessness that antithesizes aimlessness. Together in spirit but apart in manifestation, they experiment with spatiality across their mediums and experiences.