Waking the F*** Up, Building Community Through Performance Art at a Fake Start-Up 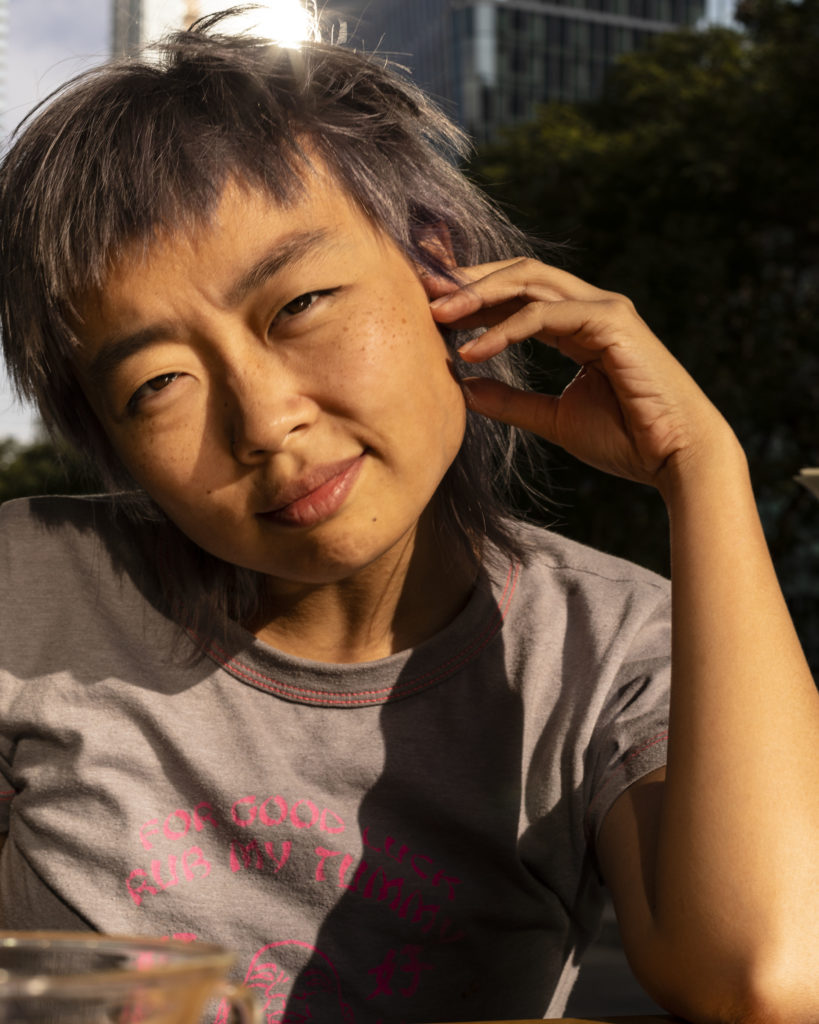 This summer, Banyi Huang curated an exhibition in a former schoolhouse in Yonkers for the artist collective PRACTICE. For the opening, visitors were bussed to the venue to take part in the site-responsive show that was meticulously curated and avant-garde. As the founders of the collective, Huang is a Chinese native, born in Beijing. Receiving her MA in art history from Columbia University and BA from Williams College, her research interests include Chinese contemporary art, but also the performance of gender and cultural belonging, and digital media. In addition to PRACTICE, she has curated shows at BRIC Media House.

Like so many other millennials in the art world today, Huang’s contribution to the arts is diverse. She is a curator, writer (she has written for us!), translator, and maker. In her design practice, she uses 3D printing to explores bodily extensions and the (non)functionality of objects. To get up to speed with our contributor, Cultbytes meet with Huang to discuss her multiple practices.

Anna Mikaela Ekstrand: What is your contribution to the global art world?

Banyi Huang: In my writing, I elaborate on exhibitions and artists’ projects without national barriers in mind; I also treat information as infinitely shareable and accessible to most people via the internet. Mobility definitely allows me to not only witness the commonalities and differences between art scenes all over the world but also recognize and enunciate both global and local tendencies in art and cultural practices.

You are from Beijing, right? How has the city changed since you left, and what do you predict about its future

The city has changed a lot, to a point where it’s barely recognizable. The old spots I used to go to get two-dollar lunches as a high schooler are no longer there, and the city is constantly gorging up useable land and expanding. Under the current political regime, the city will be at the forefront of technological innovation, but at the same time purging populations that it no longer considers useful or advantageous.

The Solomon R. Guggenheim in New York and several other prominent museums, such as Palais de Tokyo in Paris, have showcased cutting-edge contemporary Chinese art funded by Chinese foundations. Is the emergence of Chinese art in Western museums important, and what will it lead to?

Western museums have been exhibiting contemporary Chinese art since the 1990s. With China’s Reform and Opening, Chinese art entered the international art market and started participating in global discourse. On the one hand, we have to recognize linkages between institutional fervor in contemporary Chinese art and the rise and fall of the art economy. On the other hand, foundations support art with specific branding purposes in mind. For Chinese art to be exhibited without it being orientalized or essentialized is a hard balance to strike.

How and why did you end up in New York?

I first came to New York during summer internships I did at the Frick Museum and BRIC, an art and media non-profit in downtown Brooklyn. At the time, New York seemed to hold every possibility for the naive college student I was.

Then you went to Columbia for grad school! Do you think going to grad school is a must to pursue a career in the arts in New York and why?

Grad school is a two-edged sword. Not only does it provide you with the discursive lingo that is at the foundation of contemporary art, it hooks you up with important connections that can later help you with your career, for example, access to privileged circles such as working artists or a professional museum network. However, it’s also really expensive and risky. I mean, is it really worth it to spend the next decade of your life paying off student debt and not make it, or realize you can’t find a job with a degree in art history and decides to pursue law instead? It all depends. 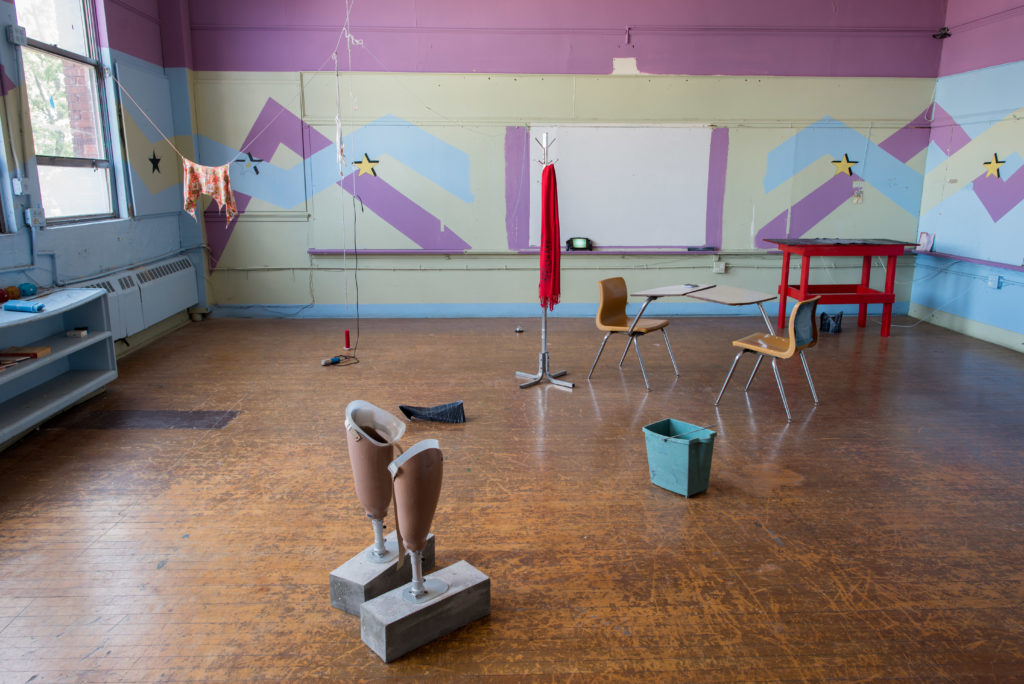 For your exhibition “Site of Unforgetting” in Yonkers, most of the show was held in a classroom; the work by Jean Carla Rodea was installed in a windowsill; the installation by Duy Hoàng was in a corner; there was also a yellow suit hung from the ceiling. Tell me about your philosophy behind these rather unorthodox installations.

The whole backbone of the exhibition is site-specificity. When I first saw the space I was struck by the vibrant wall-paper, the touches of it having been inhabited by those who put care into it. So, I wanted to invite artists and work together to highlight the delicate pockets of memory embedded in the space, and create new experiences for those involved. Jean Carla grew sprouts from quinoa seeds and placed them on the windowsill, as a way to highlight the breakdown between inside and outside, nature and the man-made. Duy wanted to occupy a desk that was already there and make it into a temporary workstation, on which he collected, cataloged, and exhibited insect, bird, and plant specimens found throughout the building. I see that as a gesture that gives agency back to cycles of life and change. The yellow suit is by Kunning Huang, a decontamination gear he found in the basement of the building. Hung from the ceiling, it is meant to stage a state of limbo or liminality, with a foot in the past and another foot into the unknown, forming a dialogue with the sculpture he made with a prosthetic limb cast in concrete. These installations are purposefully placed to accentuate the paradox of movement and stasis. 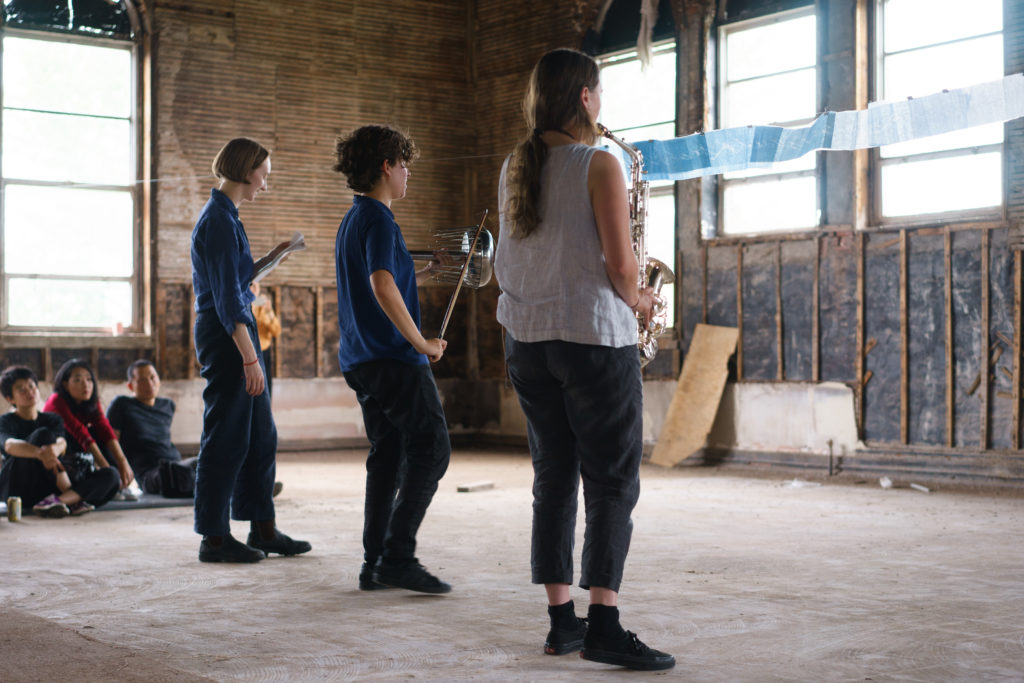 I was really moved by Vegel Engelhard’s performance that was staged in the assembly room of an abandoned school. The performers moved around in the middle of the room, not the stage, with instruments in what felt like a durational performance piece. Why was this piece important to your curatorial vision?

I felt that a piece in which the body, movement, and sound play a central part would really activate the upstairs space, which would have been used as a theater when the school was still functioning. Vered’s performance is an interpretation of a score by John Cage, and the composition is based on “The Waves” by Virginia Woolf. The resulting product is an “expanded score” that fully inhabits the space, creating an immersive environment for improvisation. The choice to situate the performers amidst the audience, as well as having the piano player be out in the hallway, extends the piece in multiple directions and allows for visual and auditory reverberations. It becomes a part of our decentralizing goal, that is, turning away from the hierarchies of the composer, the white wall gallery, and refocusing attention back to movement and observation.

PRACTICE is an artist-run collective. What are the benefits of working with an artist-led organization to realize exhibitions?

There are fewer restraints when it comes to conceiving and installing the show. Nothing at all like exhibiting in a white cube. PRACTICE has been an alternative artist-run space and residency from the beginning. And as working artists themselves, they have always been invested in nurturing and displaying process-oriented work. They encourage a certain messiness and participation. They also give helpful advice because they are especially sensitive to spatial relationships. 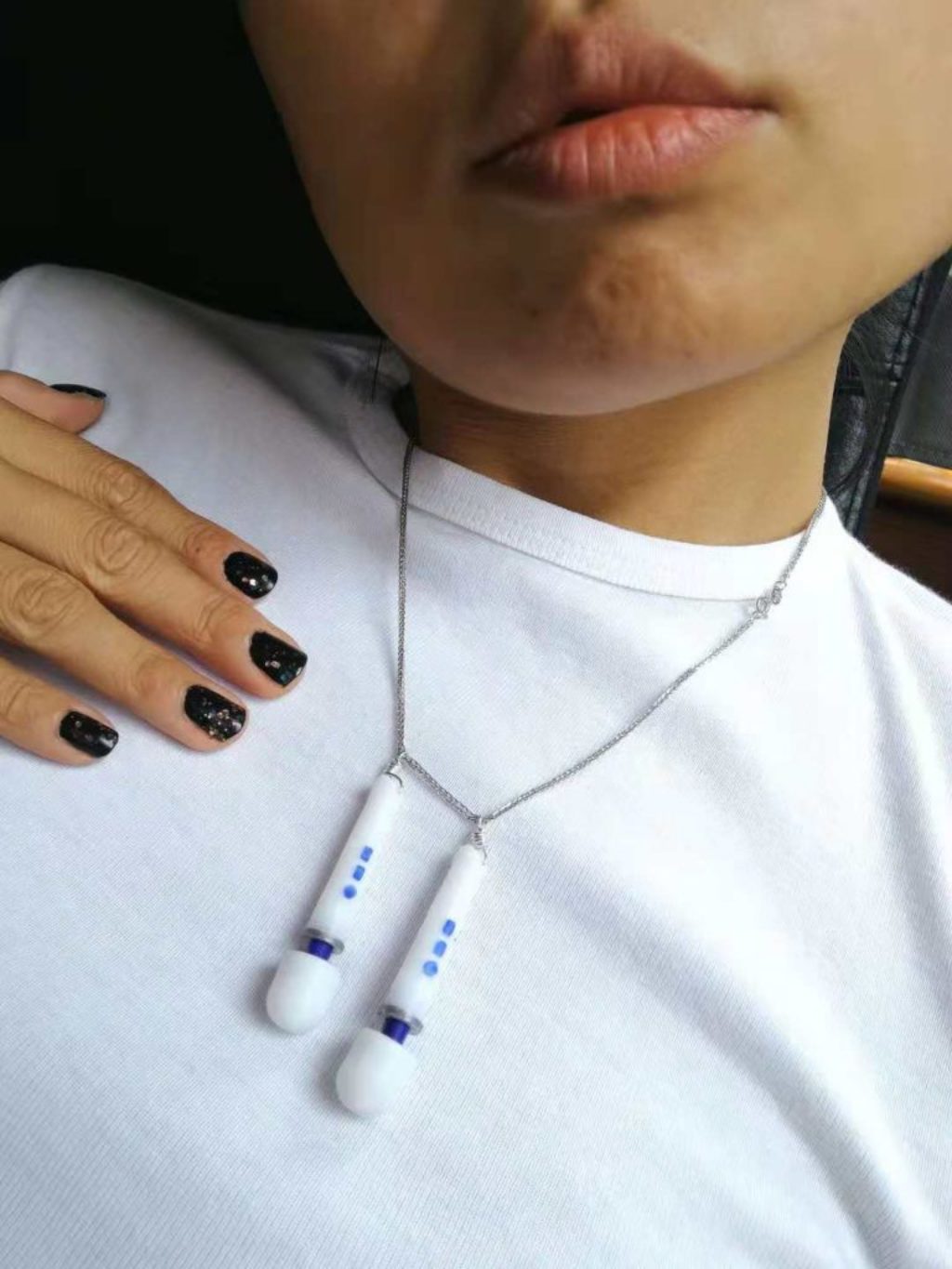 I love your jewelry, the Hitachi Magic wands (like, do you have one and is it life-changing?), wrapped candies, and the sperm entering the Wechat logo pieces – hilarious. What fuels your design practice?

Haha, thanks! I definitely recommend the magic wand 100%. I think my inspirations are based on transforming objects we consume or use on an everyday basis, but also playing with functionality, objecthood, and the lack thereof.

You are a writer, curator, designer, and video artist. Are your multiple practices dynamic and how do they inform each other?

Right now they are somewhat separate. As a schizophrenic millennial, I find it difficult to concentrate on one thing for an extended period of time, so that’s why I have to do a million different things at the same time to function. But I definitely want to bridge these different practices.

Which five contemporary artists should we keep an eye on?

The answer will be in my next show.