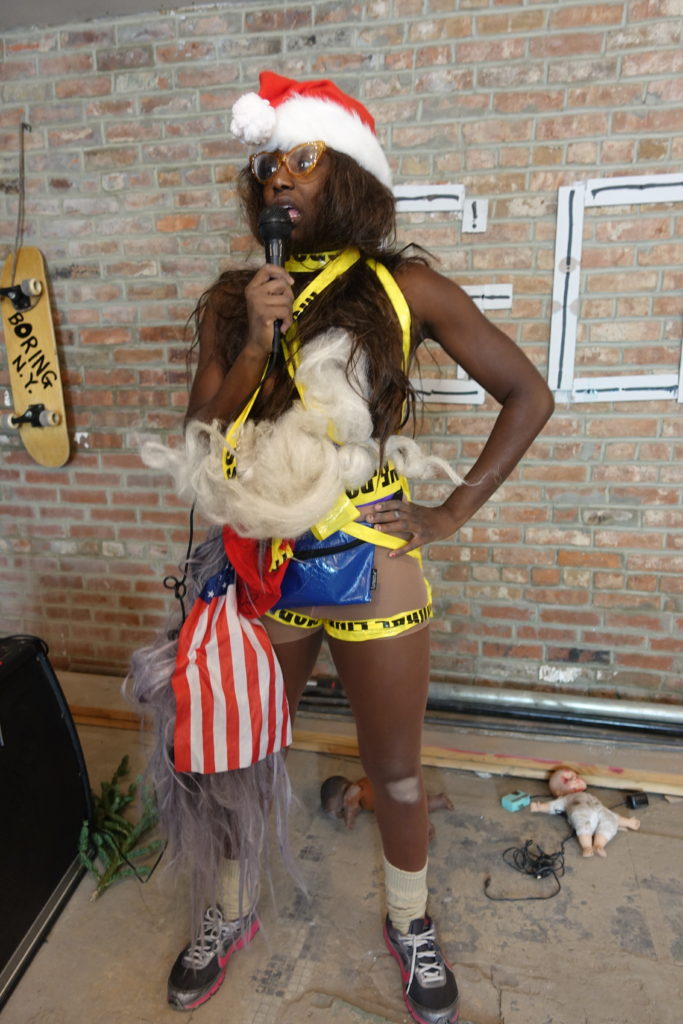 At the end of the night when I asked what she was doing for Christmas, the artist Uniska Wahalo Kano replied: “You know I’m Muslim right? I’ll probably just go out in da street and be Niggaclaus.” Whether Kano is performing on a street corner or in a gallery, simply put, she will wake you the fuck up. Her first curatorial endeavor, an ad-hoc evening of performance art held at 106 Rivington, was no different.

Kano tackles racism, violence against women, healthcare, the social body, and, current affairs in her obtrusive and loud performances that she, most often, carries out in public places. Her two signature looks vary from various masks and bodysuits to a bikini and plastic strips or tape that she ties around her body. 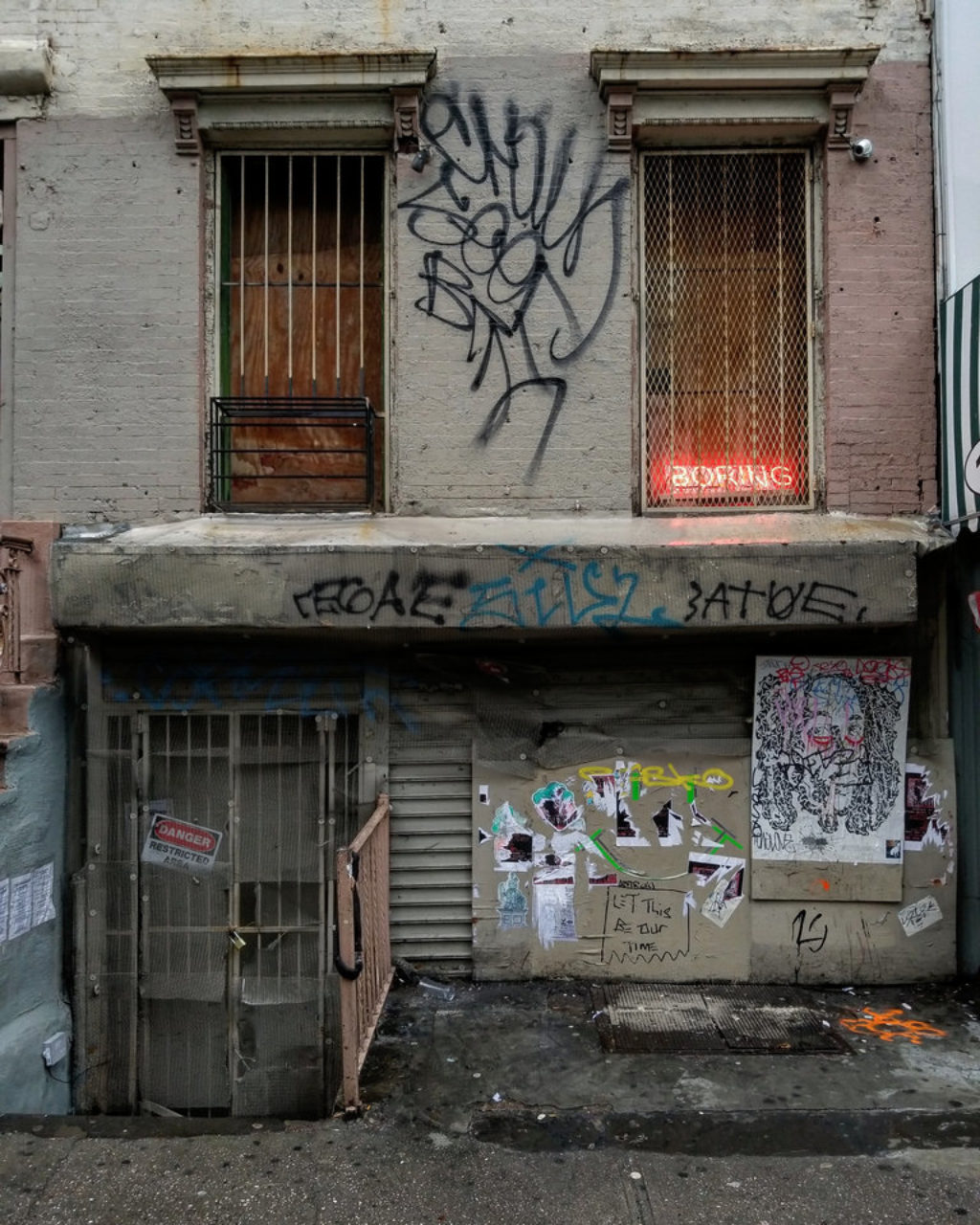 If you are plugged into the LES scene (or read the Gothamist), you might already have heard about the photographer, structural vandal, and sometimes curator Adrian Wilson’s newest art spot (or rather, art squat) on 106 Rivington.

Hoping that his piece of fake news would go viral, Wilson pretended to bring Elon Musk’s Hyperloop Tunnel to New York. Musk ideated the “Hyperloop” while stuck in traffic in L.A., it is an underground tunnel to solve congestion in the city. A couple of tweets and some 24 hours later the tech-titan had bored a hole in the ground for testing. To critique start-up culture, Wilson set up an office and adjacent gallery named the “Boring Company New York.”

Wilson’s “version” of the tunnel links SoHo House to Amazon’s new HQ in Long Island with the L-train. Unbelievable? Perhaps, but as Jeff Bezos was just promised a $3bn tax-break from New York City to open new Amazon HQ in Long Island and is reportedly one of the richest men in the world, offering support to Musk’s pet project(s) could be next. In a video, Wilson posted to Twitter he says to Jeff Bezos: “Shove your packages where your package is.”

For the performance evening poignantly titled “A Night@ TheNiggaClaus: Tales Of Tales ..stop Looking @ My Pussy,“ a microphone and amplifier were installed in a corner in Wilson’s makeshift “Boring” office in the basement of the 106 Rivington. Kano opened the night by violently hitting two baby dolls, one black and one white, on the ground wearing a Santa hat to the deafening sounds of a baby crying. Here we are worrying about gifts and getting to our holiday parties in time, in the name of baby Jesus, when structural racism is still a problem in America.

Get in the spirit of Christmas with Niggaclaus.

“Why aren’t there more black performance artists here tonight?” Uniska asked the audience during the event. “I invited lots of them, black people just don’t show up, you have to make them come.”

The second performer of the night was also black, @IamFrei performed a spoken word piece, reading from a notebook assisted by a chorus of volunteers who were present to intensify her screams, sobs, and laughs. The work was poetic and intimate.

Dressed for the occasion in a red jacket and red hat, Alexander Romania gave a powerful spoken word piece, on the stoop of the building lamenting the current state of our consumer, body image, and tech-driven society. During the piece, with increasing intensity, he repeated that he was sending messages from the “beyond.” Using a traffic cone as an amplifier, he shouted until his voice broke. Throughout the audience responded at will: “kill all white people,” “we love you,” “too real.” Romania works between dance and performance and recently finished a residency at Abrons Art Center. 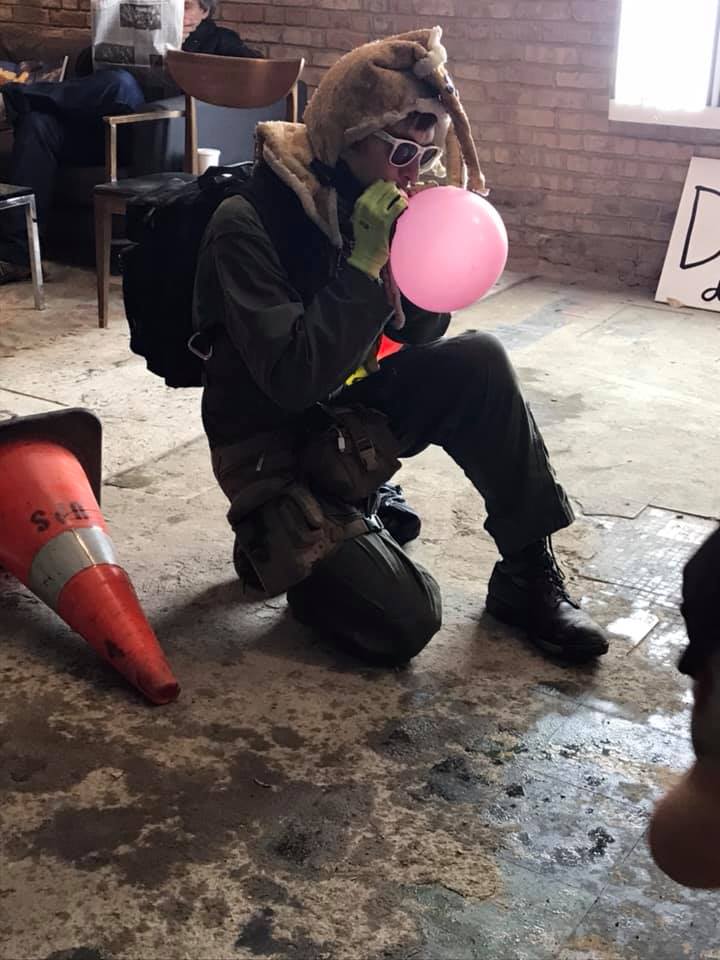 Melanie Tomsky, a classically trained pianist and violinist turned visual artist, told Cultbytes that she dabbles in the performance art space for its lack of judgment. In an impromptu performance, her silver glitter booties, paired with pants, and a silver sequin top turned from downtown cool to showgirl when she took the stage. Tomsky used an umbrella and a lipstick – what she had handy – to add theatricality to her dance gone awry. Midway through she smeared lipstick across her face and to close her performance she sat down sobbed, stopped, and then suggestively writhed on the floor. As if to say “here I am, a roller coaster of emotion. My true self!”

Highlighting the invisible boundaries of what is acceptable in female behavior, I drew a parallel to a video works by Pippilotti Rist, “Open My Gland (Flatten)“ (2000) where the artist presses her face against the screen flattening it and smearing her make-up. Times Square Alliance and Times Square Advertising Coalition (TSAC) screened the piece on Times Square all of January, last year. Perhaps proving that this visual language is now understood by the masses.

“Another white guy taking off his clothes,” shouted Kano when the puppeteer and street performer Kalan Sherrard, a.k.a. Enormous Face sat with his back to the audience with a puppet on his shoulder singing – stark naked. To close his performance he urged the audience to make a sound each at the same time. As shouts drowned out groans and animal sounds mingled with beats, I felt the room come together. In the spirit of this particular strain of New York performance art scene, the event was jovial and inclusive.

In this moment of fourth-wave feminism preoccupied with untangling female representation in the media and sexual harassment, is there room to consider male-experiences? The answer is yes, and it is important that we listen.

Kikiriki performed “Life Poultry” a biopic performance to his own rock soundtrack, where, through a gendered lens, the artist lay himself and his masculinity bare.

Black men are six times as likely to be incarcerated than white men. Jacob Cohen, a musician who contributed with the amplifier, took a moment in between performances to tell the crowd that he had been fired earlier in the day for the video he created for a GoFundMe page for an inmate at Rijkers Island. The young man had been incarcerated at age 15 for a murder he says he did not commit. Say what? This caught the audience’s attention and we all huddled closer to see the video on his phone. Cohen had met the boy in connection with a program he ran, bringing art to young inmates, funded by Friends of Island Academy. His honorable action bridged the gap between the evening’s performances and, the political messages they carry.

What Wilson envisioned as a practical joke and viral sensation has turned into an intimate and friendly community building art space. In the gallery on the second floor, Wilson’s artist friends, and friends of friends have installed their work. 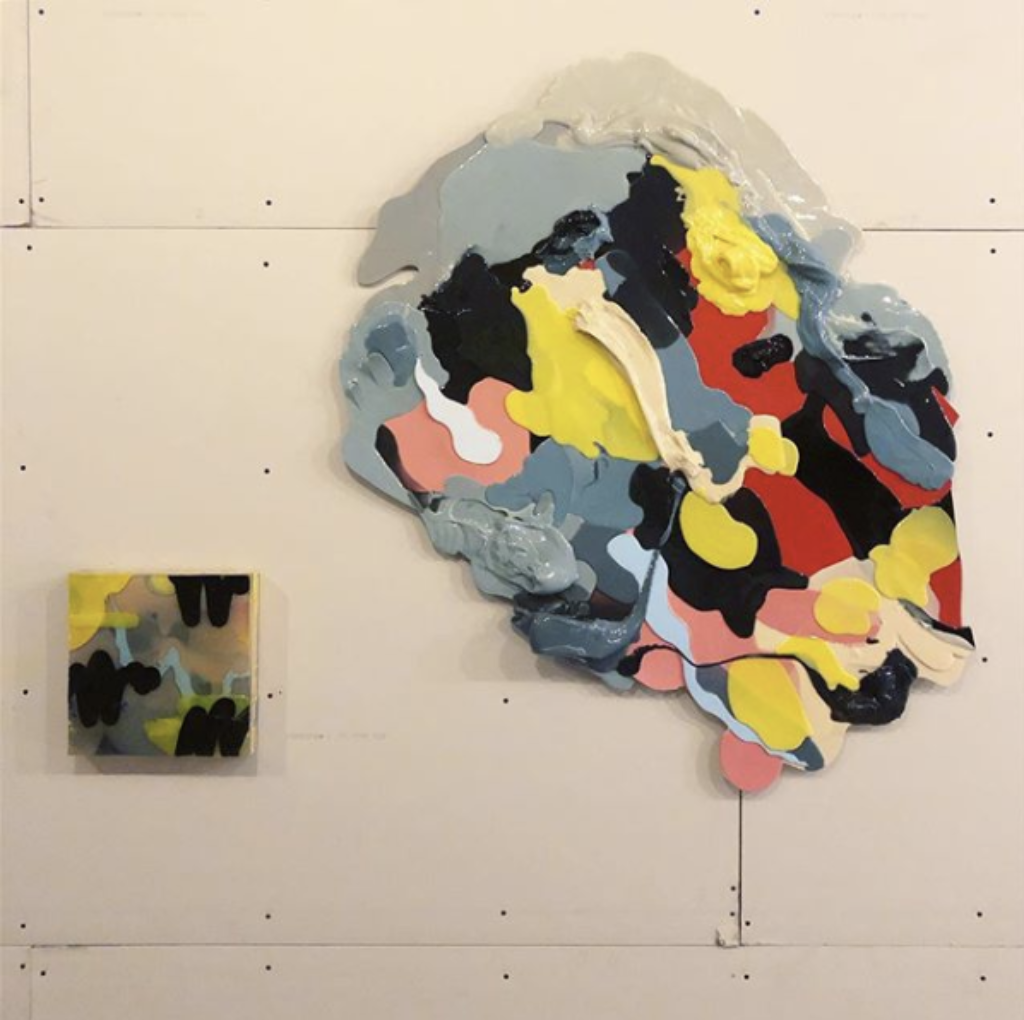 Painter Meir Srebriansky’s eye-catching resin works blasting with color hang on one wall. Reminiscent of thick impasto, the resin has skillfully been applied like brushstrokes to these wall works. Srebriansky’s works combine influences from pop-art and popular culture while exploring and pushing the boundaries of painting. Opposite hang two of Rob Ventura’s paintings. A sensibility of texture, presumably from his ceramic practice, crosses over in his painting. In between performances, spectators and performers climbed up the ladder to take a look. 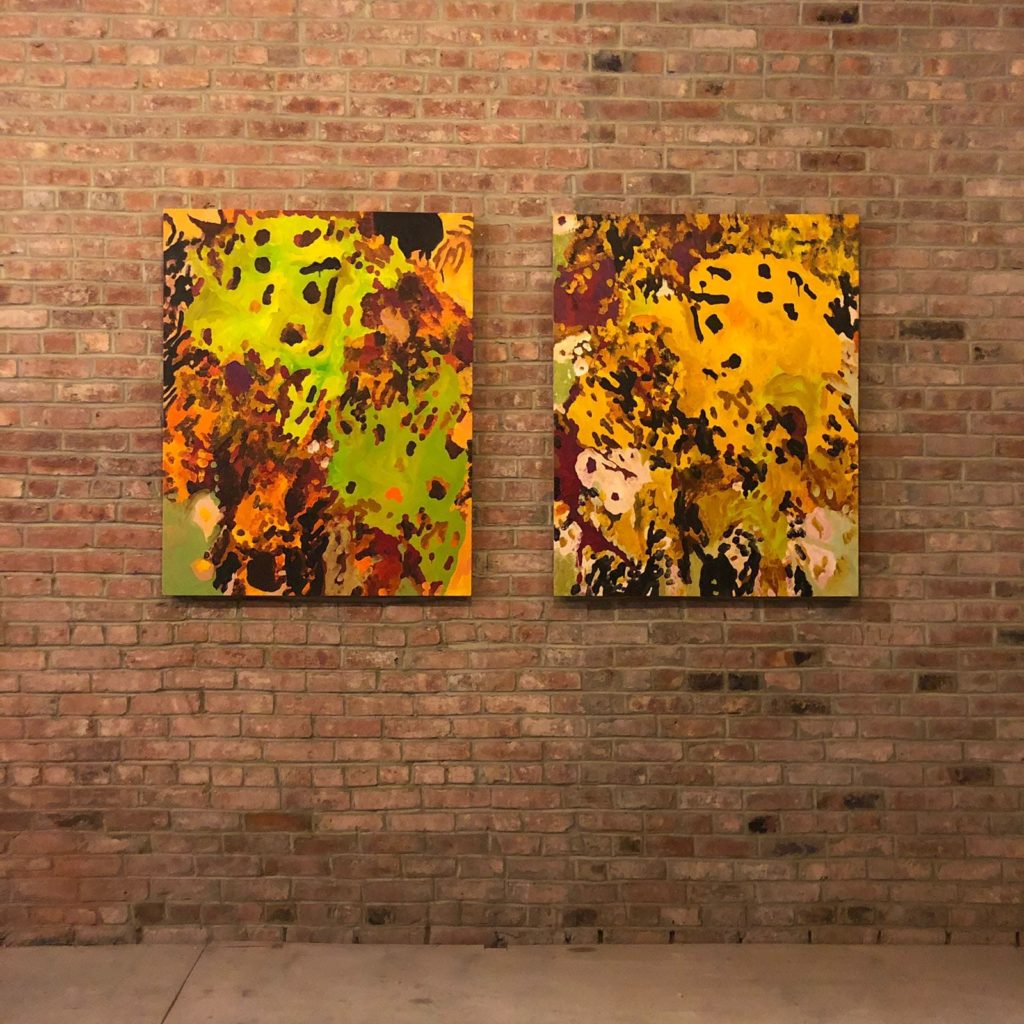 During these types of ad-hoc events, artists take advantage of immediacy and conceptual flexibility when carrying out their work; interchanging the old with the new and blending pre-rehearsed with off the cusp. Therefore, introducing Kano and Wilson was a perfect fit. 106 Rivington encourages an immediacy that is uncommon in New York’s polished art world where galleries and museums operate with layers upon layers of filters, which talent alone cannot penetrate.

“Do something real and beneficial,” Wilson urges. With 106 Rivington his goal is to “add to the city we love, adding color and variety and humanity to this big concrete ATM we call New York.” And, that he has.

The Boring Company New York and its adjacent gallery, SpaceX, are open to the public between noon and 8 pm daily, or by appointment through January 31st, 2019. 106 Rivington, 10002, NY, NY. DM @interiorphotography.