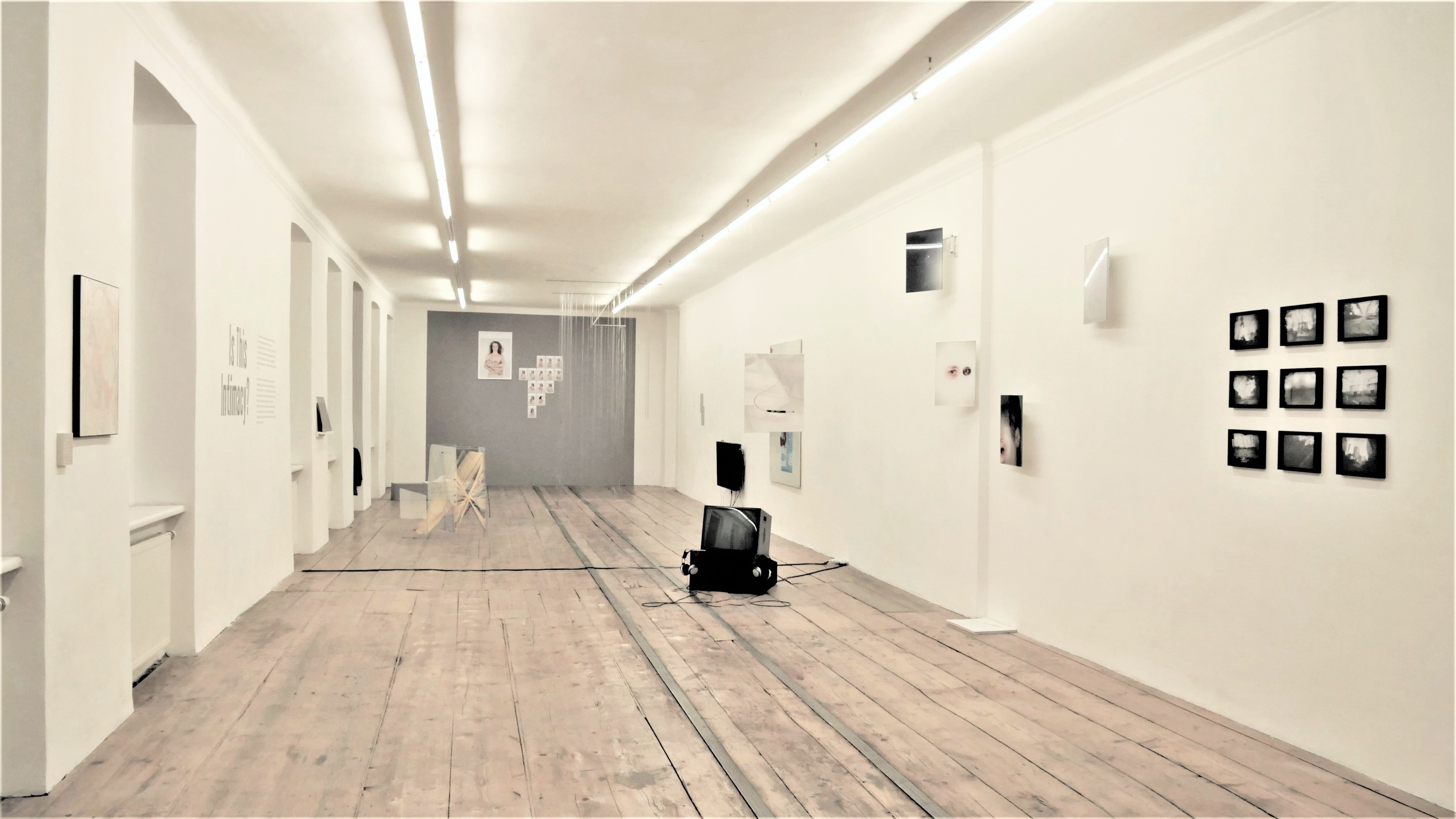 21st-century life is characterized by a constant flow of information, hyper-communication, and globalization. New shifting boundaries between human and machine, distance and proximity, and states and corporations have provoked a collective obsession with relationships and their ambiguities. Using the word ‘intimacy’ as its starting point, the group show “Is This Intimacy” explores the blurry, slippery, familiar, and illusionary aspects of our human condition through the work of eleven artists at Krinzinger gallery’s project space Krinzinger Projekte.

At first, it may seem that the six curators who curated the show as part of Curator’s Agenda, a curatorial intensive organized by BLOCKFREI, have taken on too sinuous a topic to develop during the short month they had to put the show together. However, instead of presenting fixed ideas or ideals the exhibition poses questions: “How do we form intimate moments with ourselves and others? How do we create distance or intimacy with our personal histories, and how do we create new intimate publics in an environment dominated by affective capital and ‘successful’ images of public intimacy?“ Gallery goers are met with artworks that provoke, confuse, and enlighten around these questions. 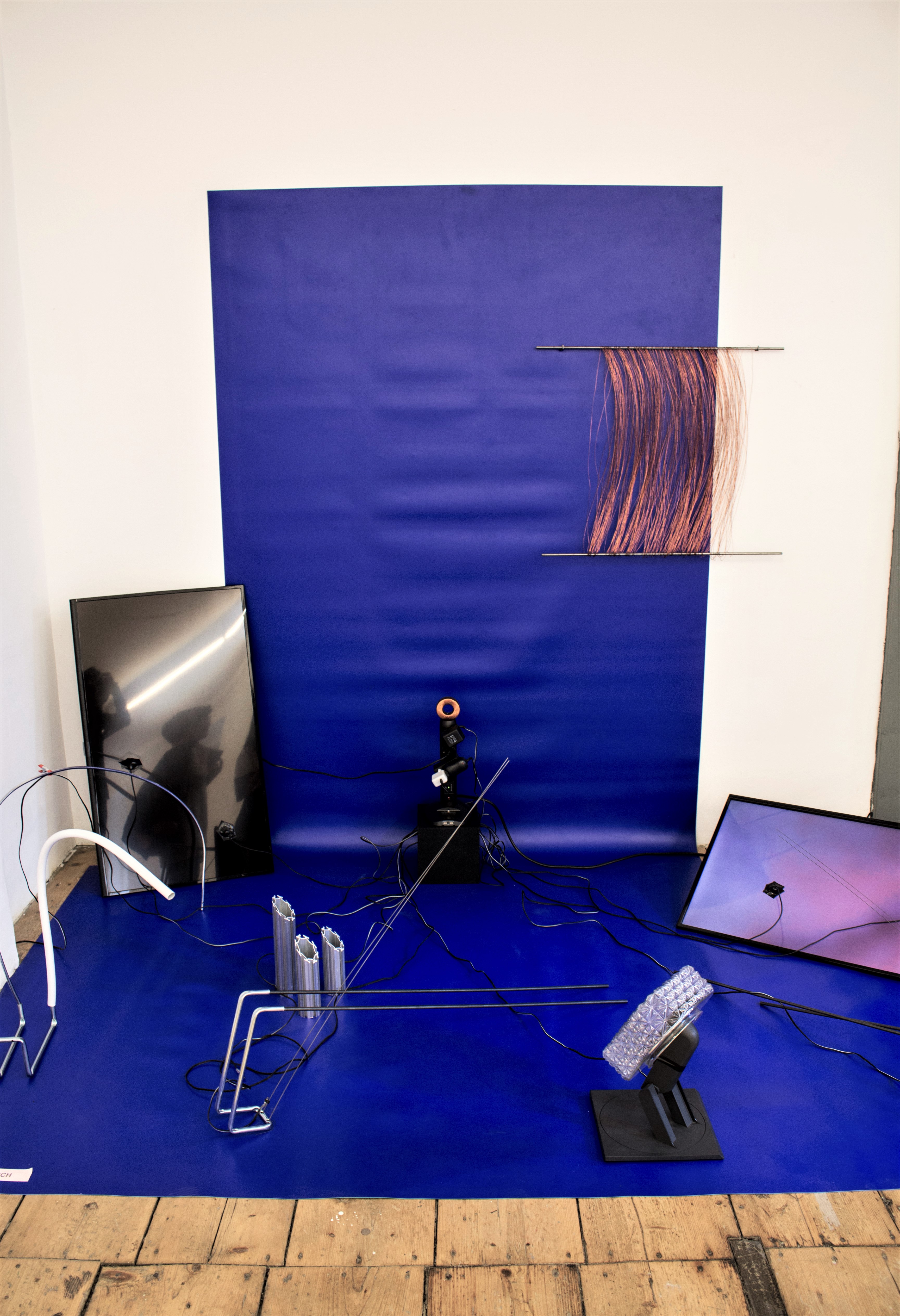 Above: Anna Lerchabaumer, Every breath you take, 2019. Previous: Installation view. All photos courtesy of Curator’s Agenda.

The exhibition consists of three parts. Upon entering, the first works delve into the surface of ideas revolving around intimacy. The works by Anna Lerchbaumer and Anne-Clara Stahl form a strong dialogue of multiplicities, imitation, and desire. Lerchbaumer’s installation “Every breath you take” (2019) presents an assemblage of objects: screens displaying close-ups of living faces, and the skin of AI, robots, and the machines humans are integrating into their everyday lives, objects that omit electric noise, and sensors that monitor and measure unseen but felt currents. The objects are scattered across a deep blue carpet that is installed on the wall and floor, the color perhaps referencing BSOD – or the blue screen of death – that appears when Microsoft Windows encounters a system breakdown.

Anne-Clara Stahl states that: “Hands and body parts are the actors of her thoughts. In her artistic practice she observes daily habits of body movements and gestures of people around her. The touch creates a form intimacy to open a window to the world of emotions, whether it is a lack of touch, a cautious, soft or strong skin on skin contact. “Dive into the crowd” and “The silent applause of hands” are fragments of words etched with a pen, scratched on wooden blocks. Since intimacy has many surfaces, both works, of Lerchbaumer and Stahl, show and play with intimacy through the human’s first layer – the surface of the skin.

The second grouping of works centers around connections and relations between people, places, things, and space. Mona Radziabari’s series of photographs “Pointless Hole” captures the fragments of the revolution in the city of Teheran. Photography became a forbidden practice so the Iranian artist took them with a concealed pinhole camera. The nine small-scale works form a fleeting, blurry, and oppressive image of the streets of Teheran, with a sense of feeling of being there but not there, symbolizing a citizen’s secret protest and an act of reclaiming the power and rights of freedom to exist within public space. 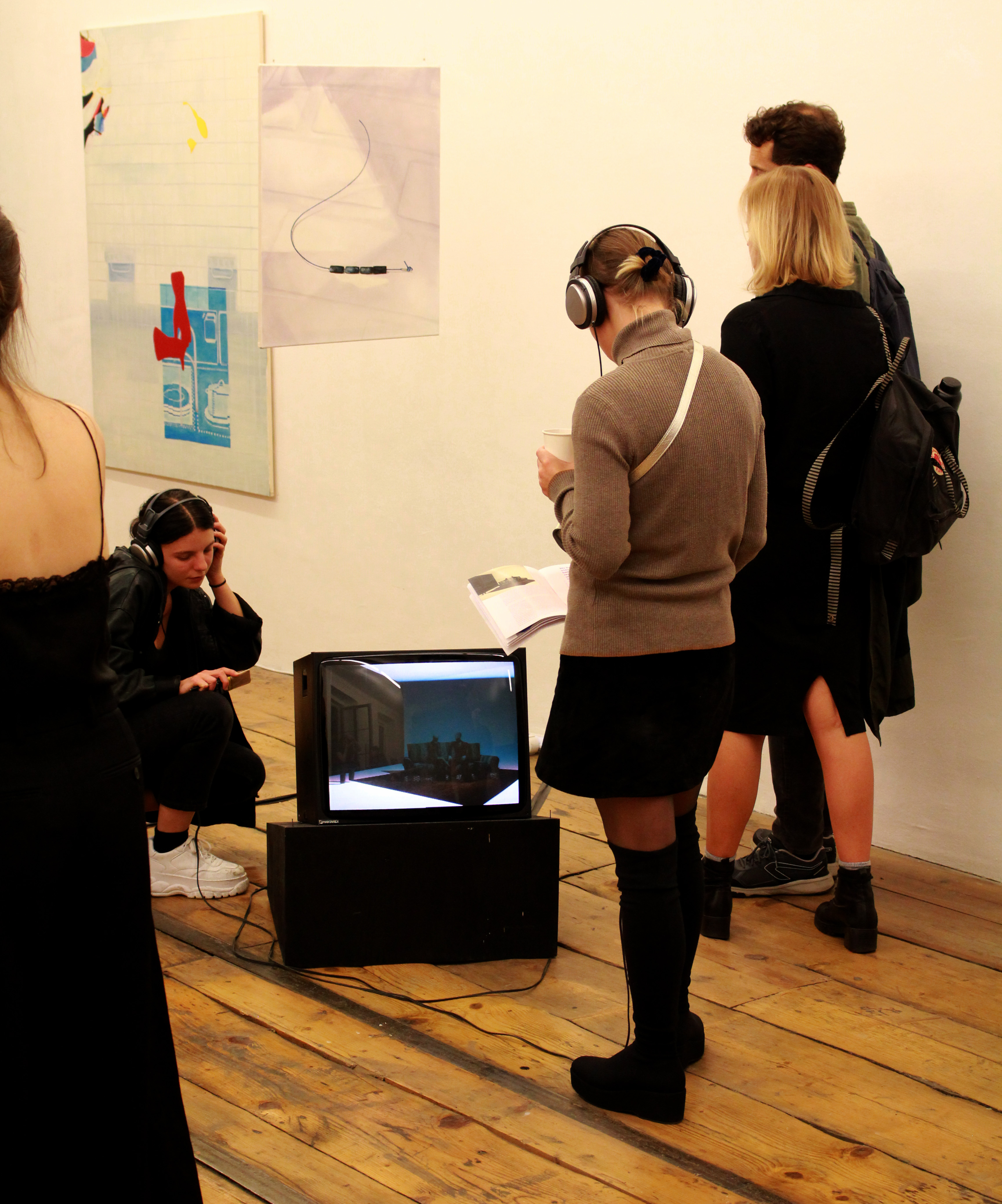 Expanding the modes of image-making, Virtual Reality helps to create entire worlds. Maximiliane Leni Armann’s immersive experience “Late” (2019) uses the technology to explore the body in space playing with scale and voyeurism. The topic of intimacy also plays a huge role when it comes to sexuality and coupledom. Armann’s work “First Date” (2019) provides an unnerving critique of heteronormative dating. The awkward situation of the two computer-generated female and male characters simulate a one on one conversation or role play, where they talk about their hobbies, day jobs, Youtube channels, and other contemporary topics. The work reflects the dual emotions of discomfort and comfort when getting to know another person.

Veronika Abigail Beringer’s portrait of her Intrauterine Device (IUD) in the work “Weaving and contaminating your sterile connections” (2019) objectifies the commonly used, but barely seen and noticed contraceptive device that lives inside someone. The intimate object enables and protects a person from getting pregnant while having sex, is relatively invisible and become therefore an additional functioning part of the body. 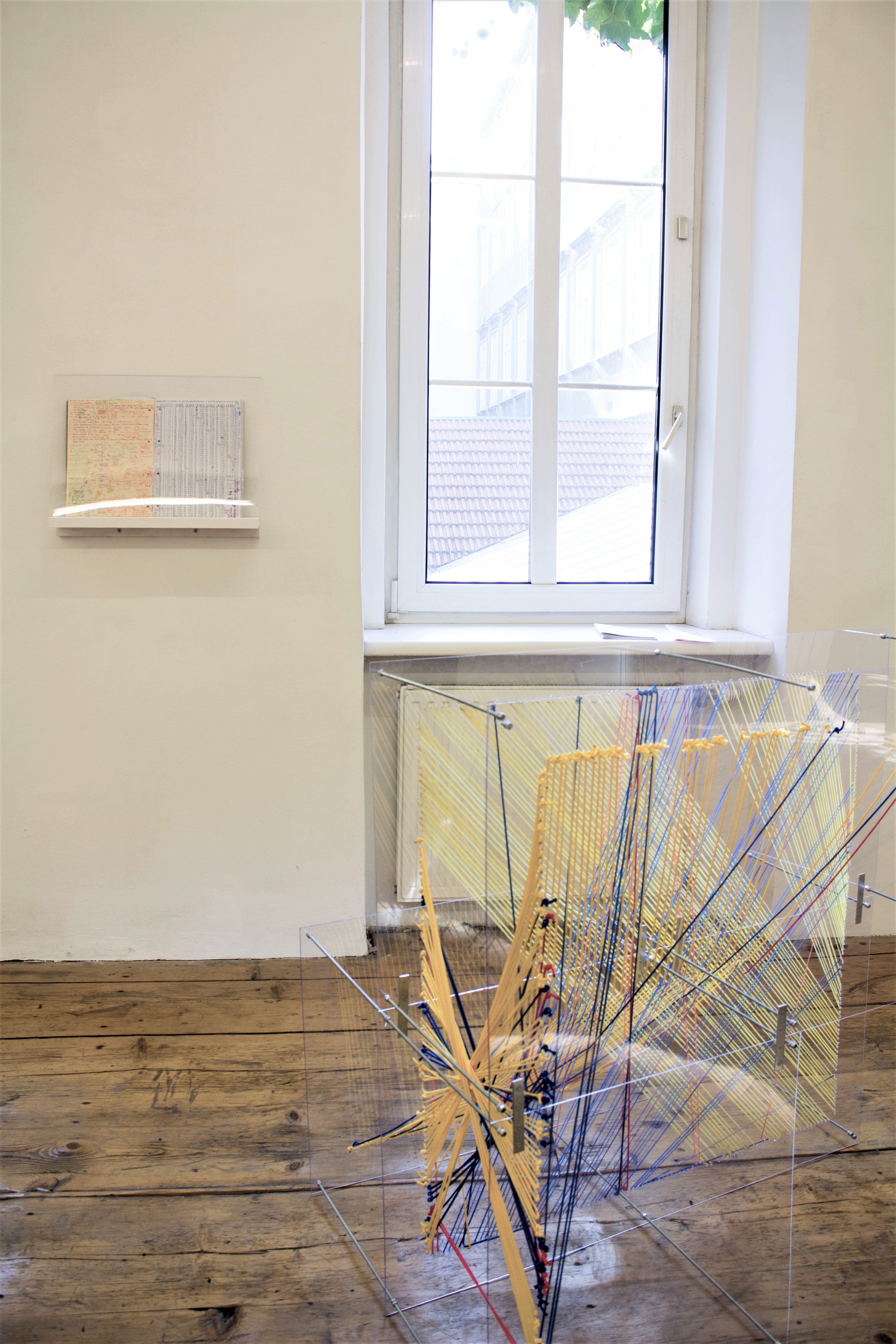 “I Hope He Doesn’t Mind” (2019) by Darja Shatalova documents her emotions in a chart, like a feeling chart, during a timespan since she felt her relationship is about to fail. Trained in data-analysis and mathematics, she creates a sculpture with acrylic plates and ropes representing her color-coded feelings to demonstrate the transparency and endless information streams of data. In her case, data did not quite match her feelings. It was more of a constant stream of upside-down emotions which did. At the end of her experiment and the end of her relationship, data showed that there had been more happy days than she had actually felt at the time, which show the discord between qualitative and quantitative data.

The third part of the exhibition dissolves into questions about culture, the self, and society. It presents a non-linear collage of ideas through artworks, performances, talks, and text.

Eva Rybárová investigates anxieties and phenomenons within the millennial generation. In the multimedia series “Kurt Hermes“ (2019) she presents the selfie as a narcissistic act.

You are in a constant worry about your self-image and virtually created identity prepared for an audience and tailored to please final recipients. The question of its connectedness to the inner dialogue and self-esteem arises. In the music video “Heroes: Amy“ a young person faces the challenges of a contemplative mode of being in a hyper-connected society. You can’t stay, you can’t stop, screentime becomes lifetime, and heavy confusion is part of the game. It questions life’s morality and core values.

Veronika Abigail Beringer’s work “I <3 everything abt u“ (2018) is about the notions of fandom as a contemporary form of intimacy. It is about an anonymous fan in devotion to Beach House’s lead singer, Victoria Legrand, specifically the fan’s interest in the singer’s hair. The mixed-media installation displays a shrine of sorts of wood, hair, ribbon, volcanic sand and an iPad showing pictures with music in the background. 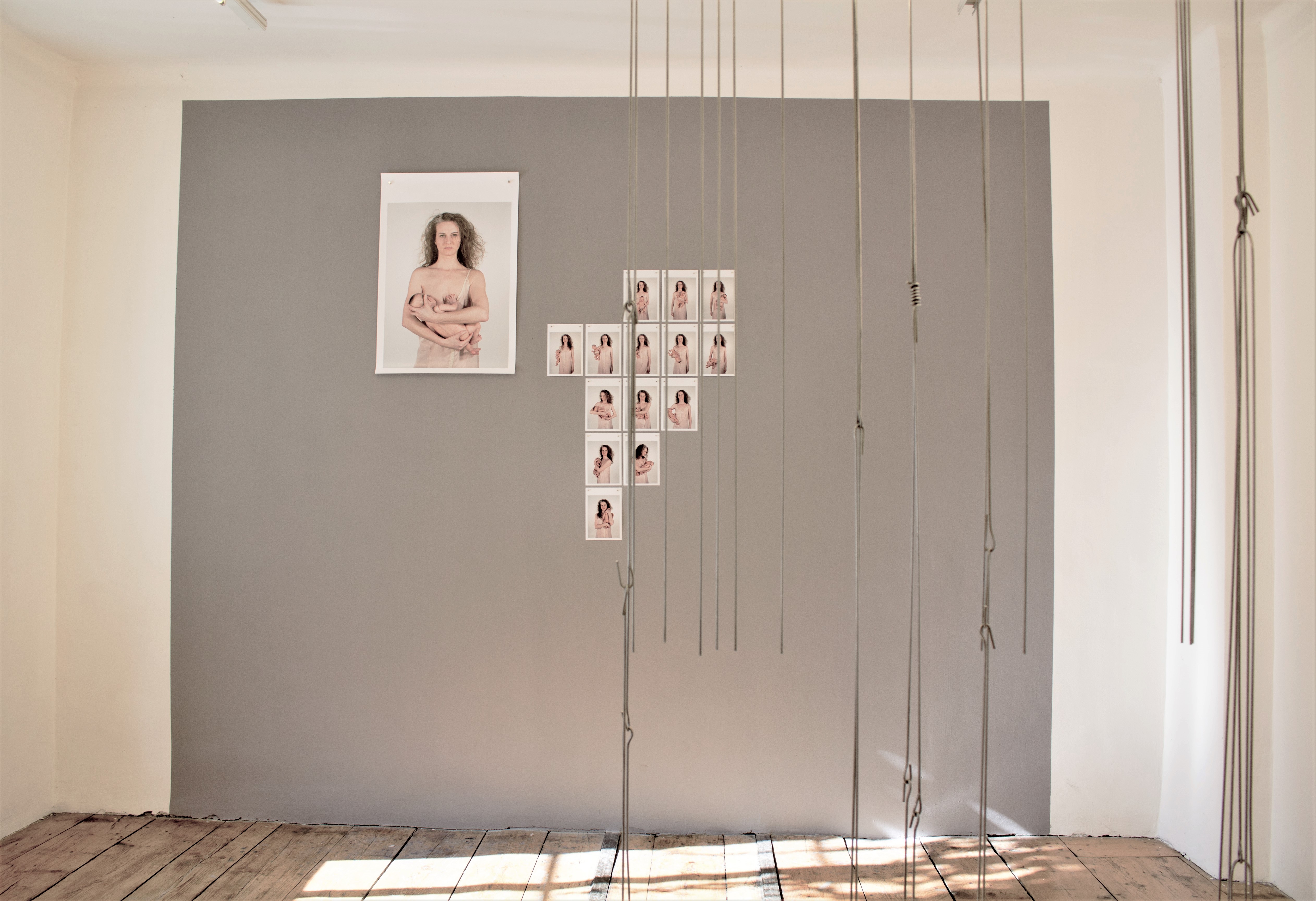 The artist Alfredo Ledesma Quintana’s work “Kipu“ (2019) consists of a written letter to his grandmother, who live miles and hours away from him. In his work, which he dedicated to her, he wants to dig deeper into the ancient technique of knot-making used by Incan people to record information. It symbolizes a non-western idea of the art of silversmithing and connects cross-cultural realms of tradition and ancient and contemporary society.

Paula Flores researches new ways to connect with animals, plants, and insects. She created a living, breathing blanket with seeds that grow. She sleeps beneath it as part of her performance practice. It is mostly uncomfortable, cold and wet and raises questions on how humans relate to climate change. She shows her dream diary, in which she records the dreams she has during the performance. Visitors may then read this personal diary.

The performance and multimedia artist Bernadette Anzengruber came across a subculture in Japan where collecting and interacting with realistic-looking baby dolls is practiced. For her series “MOTHERHOOD – eternal love“ (2018) she used her lifelike reborn doll to stage photographs of herself as a new mother and posted them on her personal Instagram account, which stirred many questions, mostly behind her back, and generally critiqued her “situation.“ A lot of pressure, competition, and notions of care were put into the emerging right or wrong discussion. The artwork doesn’t critique parenting itself, it is rather a critique on the deeply sexist public performance of motherhood on social media.

Curator’s Agenda fosters friendships that lead to collaboration and support, both important in a work environment that is becoming increasingly global and competitive.

Missing are artworks that investigate friendship, work-place relationships, and institutional structures, but perhaps these topics can be found behind the scenes or in the seams of the exhibition – in its very organization. Curator’s Agenda fosters friendships that lead to collaboration and support, both important in a work environment that is becoming increasingly global and competitive.

More than 50 international curators, predominantly women, have cycled through Curator’s Agenda that enables its participants to gain practical knowledge in curating while introducing them to the key players of the Viennese contemporary art scene. On selecting participants co-founder Nevena Jankovic comments: “We are fine-tuning the selection with the idea to create a functional team, a group that can deliver the expected tasks, which is also complimentary in its interests and knowledge.” Under the BLOCKFREI umbrella, she founded CA’ in 2015 together with Jana Dolecki as a reconfiguration of cultural exchange between Austrian and Balkan curators that they initiated in 2013.

“Is This Intimacy” presents an array of looking, perceiving, and practicing relationships by combining forms of intimacy from all over the world: on how we produce, seek, or avoid intimacy through language, flows of affect, communicational modes, capital, love, heritage, ways of working, and the impact of technology in our daily lives. Interfacing between reality and fiction with a feminist starting point the exhibition also explores gender and how relationships shift. Collectively the artworks show how culture twists and turns and how our ways of working, being, and interacting with others are strongly influenced by our cultural backgrounds. Dissecting the world through the lens of intimacy shows complications and discrepancies but also how important it is to build relationships with our pasts, others, the present, and even the future.

Is This Intimacy is open through November 2nd at Krinzinger Projekte, Schottenfeldgasse 45, 1070 Vienna.