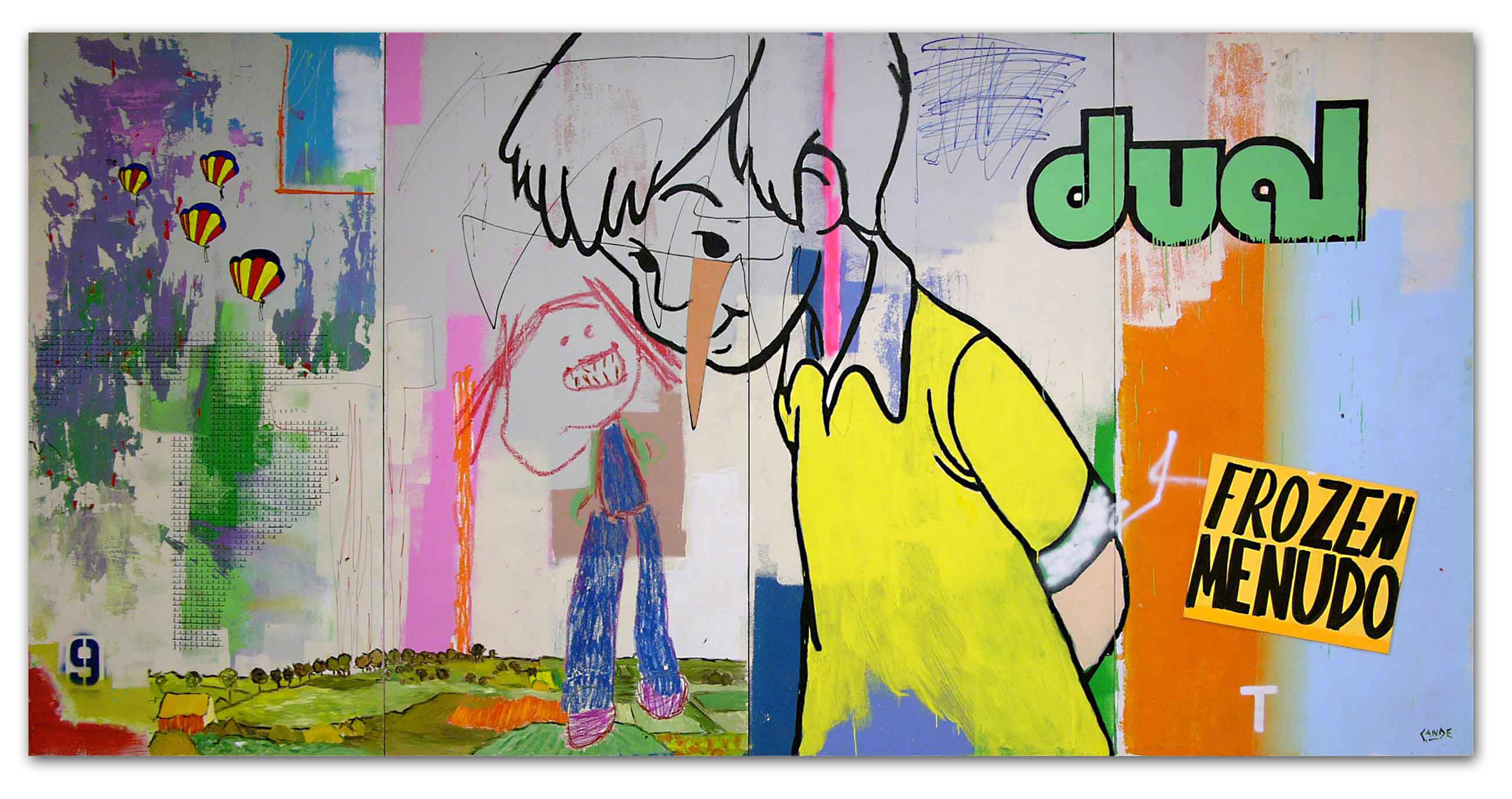 In the United States when you place the word “barrio” in front of anything, it acts as a filter. It filters whatever words follow through a Mexican-American context down to common denominators like family and the neighborhood. If I say I can play barrio tennis, it means I may not have the fancy equipment or clothes and my strokes may not be refined, but I do know the rules, and I can play with heart. I may have to jump a fence to get to a tennis court, but that just reinforces the point that barrio anything, is being of, or pertaining to, the common folk of the barrio where people are accustomed to less accessibility.

What people want is something regional and unique. What they need from art are statements that move them either emotionally or intellectually and preferably both within some meaningful context.

Traditional art, after all, has been done, and it often looks derivative no matter where in the world it originates. What people want is something regional and unique. What they need from art are statements that move them either emotionally or intellectually and preferably both within some meaningful context. This is precisely what Cande Aguilar achieves in his inaugural solo exhibition in New York “Cande Aguilar:barrioPOP” with genuine authenticity.

BarrioPOP, therefore, can be understood as fine art derived through a particular South Texas, Mexican-American, and pop culture lens. Aguilar’s fresh and colorful artwork takes us on a texture-rich ride that might not be posh, but it will get us there. In this case, with its own particular energetic style rooted in a Texas border town, pull yourself up from your bootstraps and make do with what you have, kind of feel that is strengthened through the artist’s use of found objects in his mixed media art installations. Of course, if there’s one thing the barrio (and Mexican culture in general) is known for, it is flavor. When you view barrioPOP, you’ll notice Aguilar‘s abstract expressionist use of brash brush strokes and bright colors extruded through the Play-dough press of his 1970s and 80s popular culture upbringing. 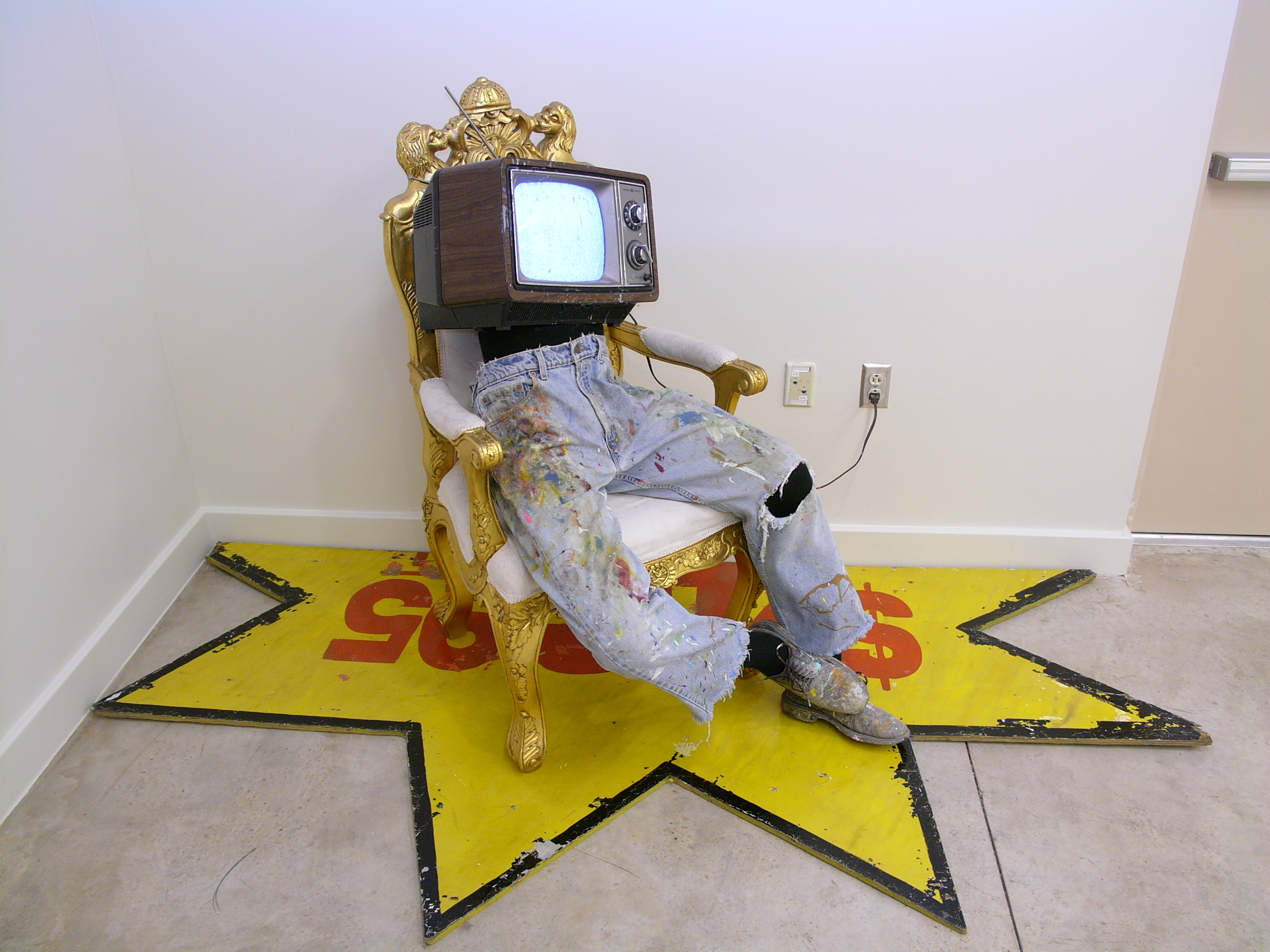 This retrospective is an interconnected series of paintings and art installations, which represent various border town memories, moods, and settings filled with nostalgia at different levels and from different angles. For anyone who might appreciate a unique cultural amalgamation of post-1960s Americana and Mexican-American sensibilities, this show delivers.

Aguilar was raised American and proud of it just like all the other Valley kids in the 70s and 80s, but he was also fully immersed in his Mexican heritage. Growing up in the Rio Grande Valley and being surrounded by Mexican culture and the Spanish language colored all aspects of his life. This included the flavor of the general cultural ideas being served up across America on television and in the movies. Those elements and their transformations viewed from Aguilar‘s unique perspective form the building blocks of his artistic practice. These hybrid ideas are the catalyst and the contextual components for his creations in this show. 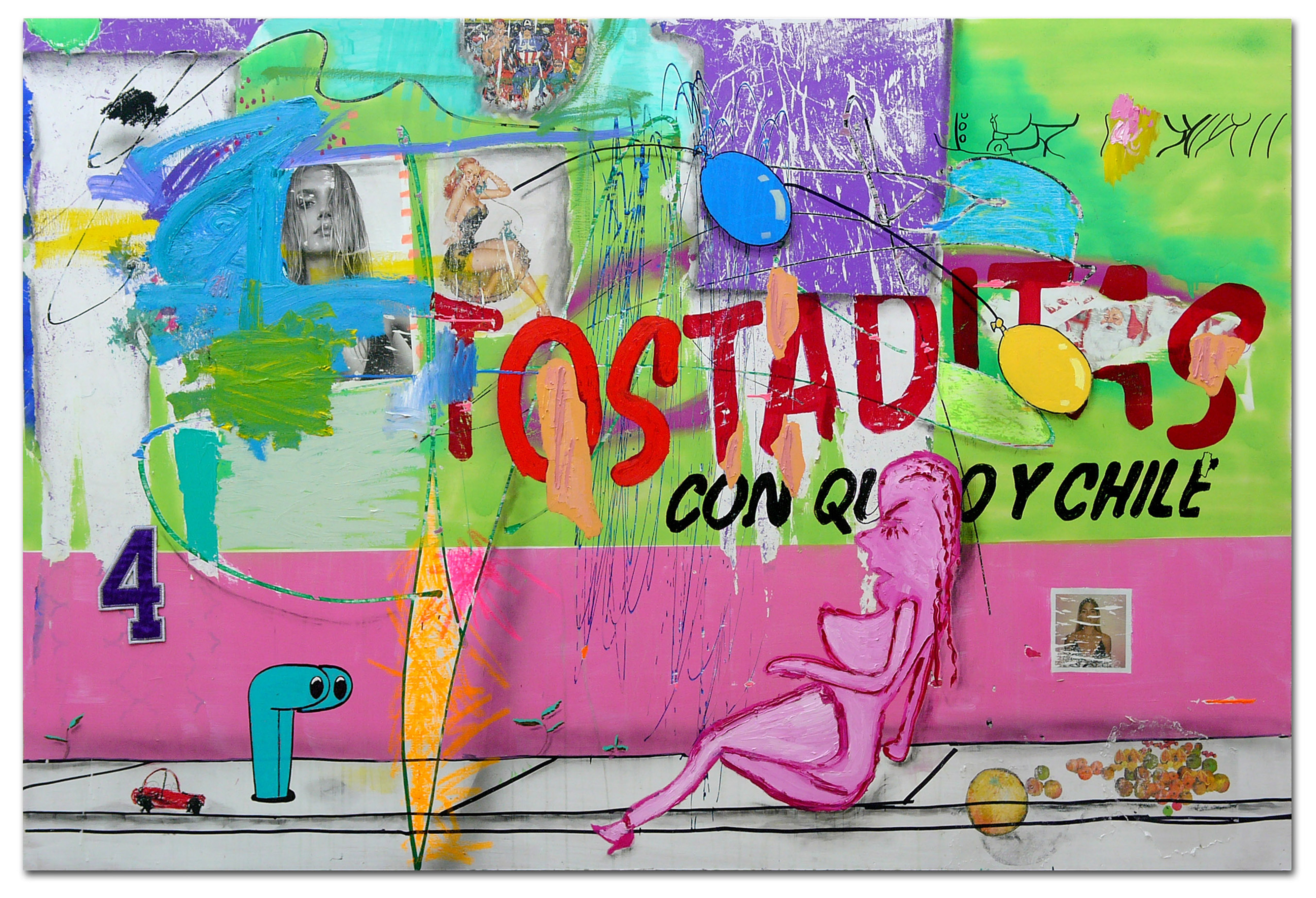 “Pedaso de Ayer,” stands out for its bold colors like bright aqua and pastel purple. Vivid red accent letters spell out: TOSTADITAS on a pink and yellow-green wall, peppered with baby blue and yellow balloons. It’s a sidewalk scene where a woman appears to have fallen down, but not without escaping the gaze of whoever has caught a peek at her with their telescoping eyes. “Land of Peace” harkens back to simpler times along the border when people used to cross back-and-forth to Mexico freely. An outline of Christopher Robin smiles down on sweet memories of rural landscapes, conjuring childlike appreciation for the simple life and the special treats of Aguilar’s youth, like Menudo, which used to delight. Ric Michel, the artist’s New York dealer, calls the work critically important and it has been included in several museum exhibitions including at Brownsville Museum, the International Museum of Arts & Science, and The McNay Art Museum.

To signify the Mexican-American border “Land of Peace” hangs on a wall in the far end of the space that the gallerist Nancy Pantirer had specially constructed for the show. Aguilar’s exhibition marks 81 Leonard Gallery’s inaugural exhibition which is suitable as their focus is on artists that are marginalized or, like Aguilar, are or have been underrepresented in New York. 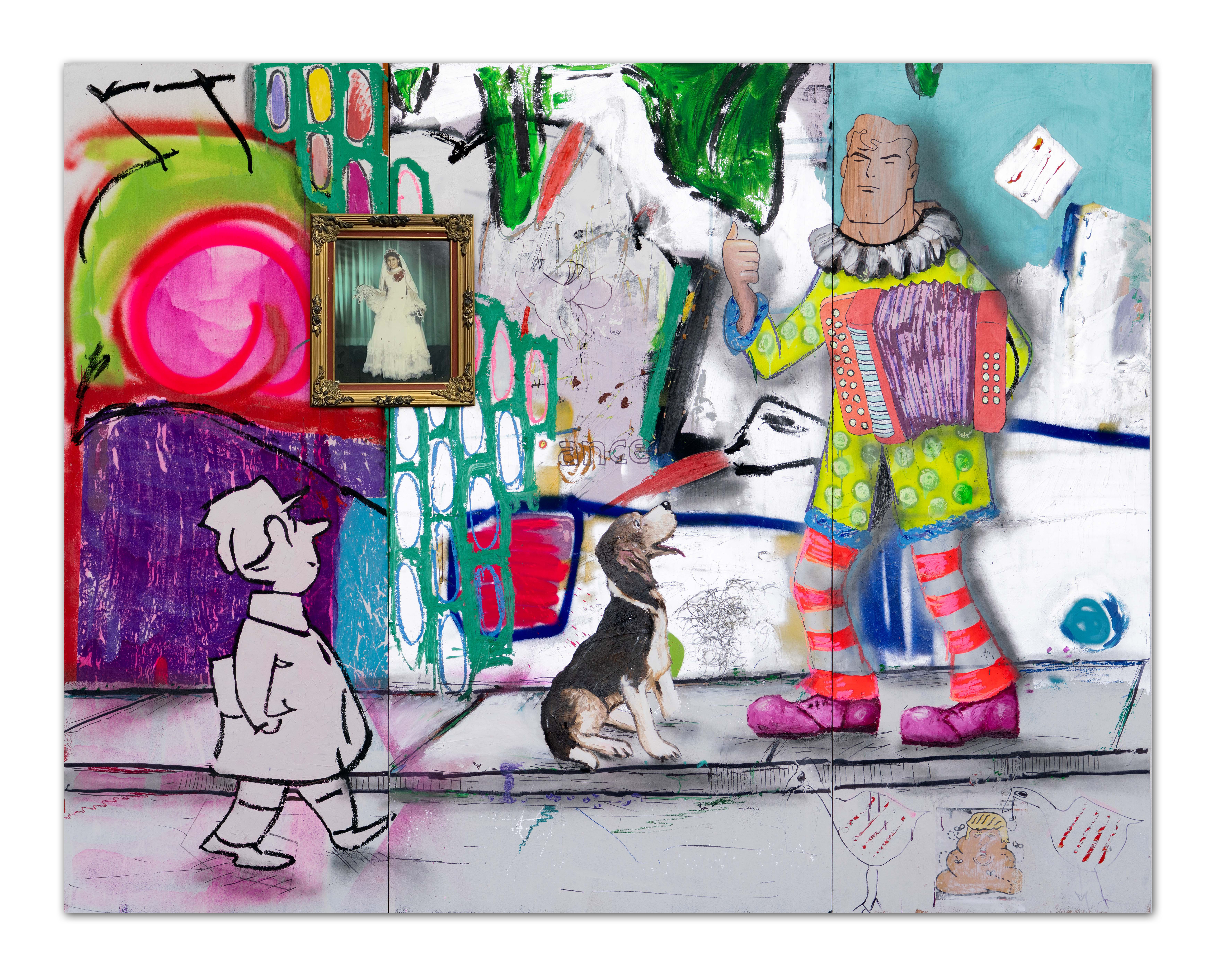 Cande Aguilar, Chanito, 2018. Multimedia painting with image transfer and a found object on panel, 81×96.5 in. Image courtesy of 81 Leonard Gallery.

“Chanito”, introduces us to Aguilar’s first passion: the accordion. Before he was a painter, Aguilar was a professional musician playing the accordion. In this painting, a Superman faced harlequin is playing accordion on the street for an enraptured dog and a working man passing by. For the artist, the sound of the accordion is the sound of the barrio, as it was ubiquitous when he was growing up. The street scene, bursting in color, is highly representative of the artist’s multimedia style that so often juxtaposes unlikely images for effect. In addition to the strange cast of characters in this artwork, there is a framed bridal portrait, which is actually a found object installed on the painting as if hanging on a sidewalk wall behind the musician. Nostalgia is intermingled with humor as the artist contrasts this photorealistic image with a cartoon representation of dog poop on the street with the face of Donald Trump – a Trumpturd.

Across the paintings and installations in “Cande Aguilar:barrioPOP,” Aguilar maintains his liberal use of popular culture iconography and imagery blended into his own individual flourish of South Texas colors and brightness. There’s no doom or gloom in his work. The vibrancy of ideas spark, flow, and call out in reoccurring themes of Mexican culture mixed with color palettes that form harmonies throughout the show. Each work, rife with graffiti, strikes a series of cords and visual notes.

Guest Contributor, Cultbytes Noe Hinojosa Jr. is an artist and a freelance writer living in the Rio Grande Valley where he was born and raised. He graduated from Harvard in 1993 and began publishing the Mesquite Review, an international literature, art, and culture magazine, in 1997. Hinojosa has exhibited his artwork across the Valley, San Antonio, and Houston since the mid-nineties and continues to work out of his studio. l facebook |