Chen Tianzhuo (b. 1985) invites me into his Beijing studio wearing red sweat pants and a multicolored rainbow hoodie that says Nassau, Bahamas. He exudes a hip cool-kid vibe, together with his partner Lu Yang he is a rising star among the new generation of Chinese artists. They don’t collaborate but Lu Yang will represent China at the Venice Biennale and is signed by the prestigious gallery Beijing Commune, her video piece Uterus Man was screened at Art Basel. And, Tianzhuo is preparing for his upcoming show at Palais de Tokyo backed by billionaire and arts benefactor Adrian Cheng (that incubates young Chinese artists through K11 Art Foundation). A good guy to know. The epitome of a power couple, don’t you think?

Vogue China, photo by Mario Testino. Lu Yang is to the far left.

Tianzhuo is initially from Beijing but educated in London. Cheekily he says he will not move back to Europe, but gladly go back for shows which, I am sure he will have ample opportunity to do after his solo-show. He works in a newly built area of artists studios where most are yet to be occupied. A rolled up carpet and sculptural work some with flashing rainbow lights fills the space. We sit in front of his laptop and and he shows me some clips and videos.

His muse is the performer in PICNIC, the three channel video piece that premiered at Bank in Shanghai and screened at Art Basel Hong Kong, playing the blond pig-tailed creature that lies between the realm of male and female. It is his deity he tells me. Symbols plastered on the screen or incorporated into the settings intermix with words like “BITCH” in his candy-colored psychadelic videos, Tianzhuo is creating his world of wonders inspired by rap, pop-culture, weed-culture (which is growing in China), Youku and Rave Culture, his own religion of sorts where his pig-tailed deity and his bongs are central figures.

I ask about what artists he likes and is inspired by, Ed Atkins he volunteers. Little enthusiasm is offered when I ask about Ryan Trecartin who also works in a similar vein in terms of the twisted, trippy and distortion of pop-cultural references. I hit gold when I ask about David Lynch. His eyes light up and he tells me he has seen all his films. Korea and Chinese rap are also large influences.

Getting ready for an opera repetition (or a dope smoke out). Chen Tianzhuo, his muse in the flesh and yours truly in the studio, 2015.

While doing his BFA at Central Saint Martin’s and MA at Chelsea College of Art and Design he was out clubbing any day of the week one of his exhibitions was a one night Rave party and it’s aftermath at Star Gallery, Beijing. He collaborates with musicians and people outside of the art world. Cantonese rap blares in his music video featuring two dwarfs and a new video that will be screened in Paris includes music by a big rather controversial Chinese pop-star whose music label approached him to collaborate. He is also directing an opera that will be staged on the eve of the opening of his show, 15 performers will move around the 800m2 space. Is Chinese censorship a problem in his artistry in China you may wonder? On rare occasions institutions have had to exclude Tianzhuo’s work from a show. At his last performance in conjunction with his solo show at Bank in Shanghai I heard rumors of nudity, penises, homo erotics and sex toys. Can’t wait to see the performance in Paris, it should be epic. I’m sure your next question is what do Tianzhuo’s Chinese parents think about their only  child and son being a controversial artist? Well, his parents are warming to the idea now that he has gained critical acclaim but he hasn’t dared show them his work yet!

If you are touring Europe this summer I urge you to keep an eye out for Lu Yang in Venice and plan a pit stop in Paris for Chen Tianzhuo‘s upcoming solo show at Palais de Tokyo.

Ceramics at The Salon Art + Design in New York 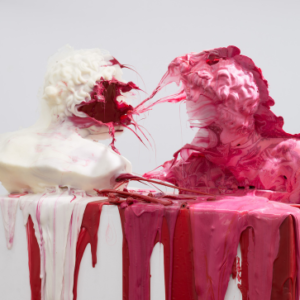 Maya Kramer, Against the Wind. Coal, acrylic box, image courtesy of the artist. In a new housing development enveloped...