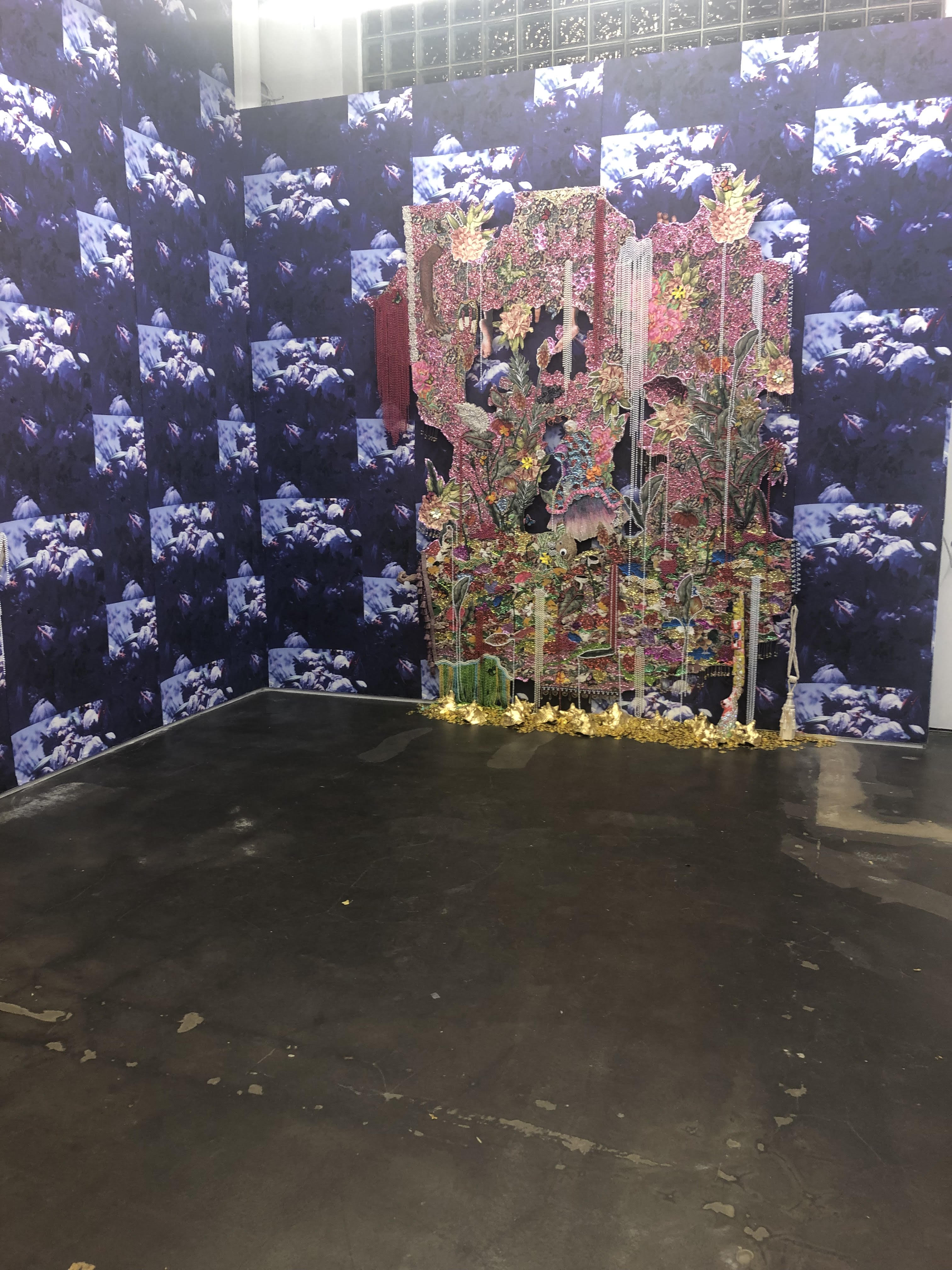 CHICAGO—We currently live in an age of social awareness where art is used as a vehicle to explore culture. Revelations of the black body and its condition, in various art forms, are trending. Ebony G. Patterson, an artist of the African diaspora, uses this current moment to draw a conceptual line between abstract art and cultural influence in her intricate, kitsch, and emotionally charged tapestries.

Patterson hails from Kingston, Jamaica and is currently based in Kentucky where she is an assistant professor of Painting at the University of Kentucky. Patterson’s work explores the black body within Jamaican culture. Her multi-layered work is known to push the viewer to embrace the act of looking through colorful elements and impactful textures.

At first glance, Patterson’s glitter centric tapestries might strike awe in the undiscerning viewer, but once awareness kicks in, the mixed-media wall hangings show their true aggressive nature. In Patterson’s exhibition “… for those who bear/bare witness…” currently on view at Monique Meloche Gallery in Chicago, IL, she forces the viewer to decode a multitude of materials and signifiers to understand an evolving dialogue on Jamaican culture. Through the use of collage Patterson creates a maze of emotions by layering embellished fabrics, faux butterflies, dissembled fabrics, costume jewelry, and toys. All of her materials have harsh edges evoking cut and paste element to her work, an aspect that speaks to the unfinished nature of the world around it.

Decoding the assemblage of refurbished materials employsvour brain’s ‘the what’ and ‘the where’ mechanism, or cortical streams, which are the neural processors responsible for what we hear and see. They are our ability to find and recognize a specific object. Patterson brings our minds back to a state that opposes the reliance we have created on computers.

Patterson’s work creates a controlled environment speaking to how our brain processes new information in regards to cognitive and emotional processes through categorizing and finding the desired elements in a scene filled with floral designs, gaudy jewelry, and shiny objects. The need to categorize takes the viewer back to a state of originality, due to the extensive nature of her materials there is not a one-way interpretation that has become common in this day in age. Our society has predisposed us to what we like, Patterson exposes us to what we choose in a state of isolation. Straying from societal norms is not common, but Patterson forces us to create our own opinions on issues that carry peer, social, and political pressure.

…in 1685 a law known as the Black Code allowed for slaves to own articles of fabric that allowed many people of color to become tailors and have a sense of ownership.

Not only the objects themselves are important, but also their placement – some visible others invisible. Post-colonial Jamaica allowed for the flourishing of identity, and the peeling of a false imposed self from a suppressed culture due to colonization. Like a rebus, there is a line of reasoning, or a narrative, surrounding each object in regards to their use, and to their re-use like fabrics. In 1685 a law known as the Black Code allowed for slaves to own articles of fabric that allowed many people of color to become tailors and have a sense of ownership, to the current day where fabric is the foundation of upholstery, clothing, and many aspects of our homes. They tell stories of importance and influence, two characteristics that are influential in our world today, Post-Colonial America, and the West Indies. 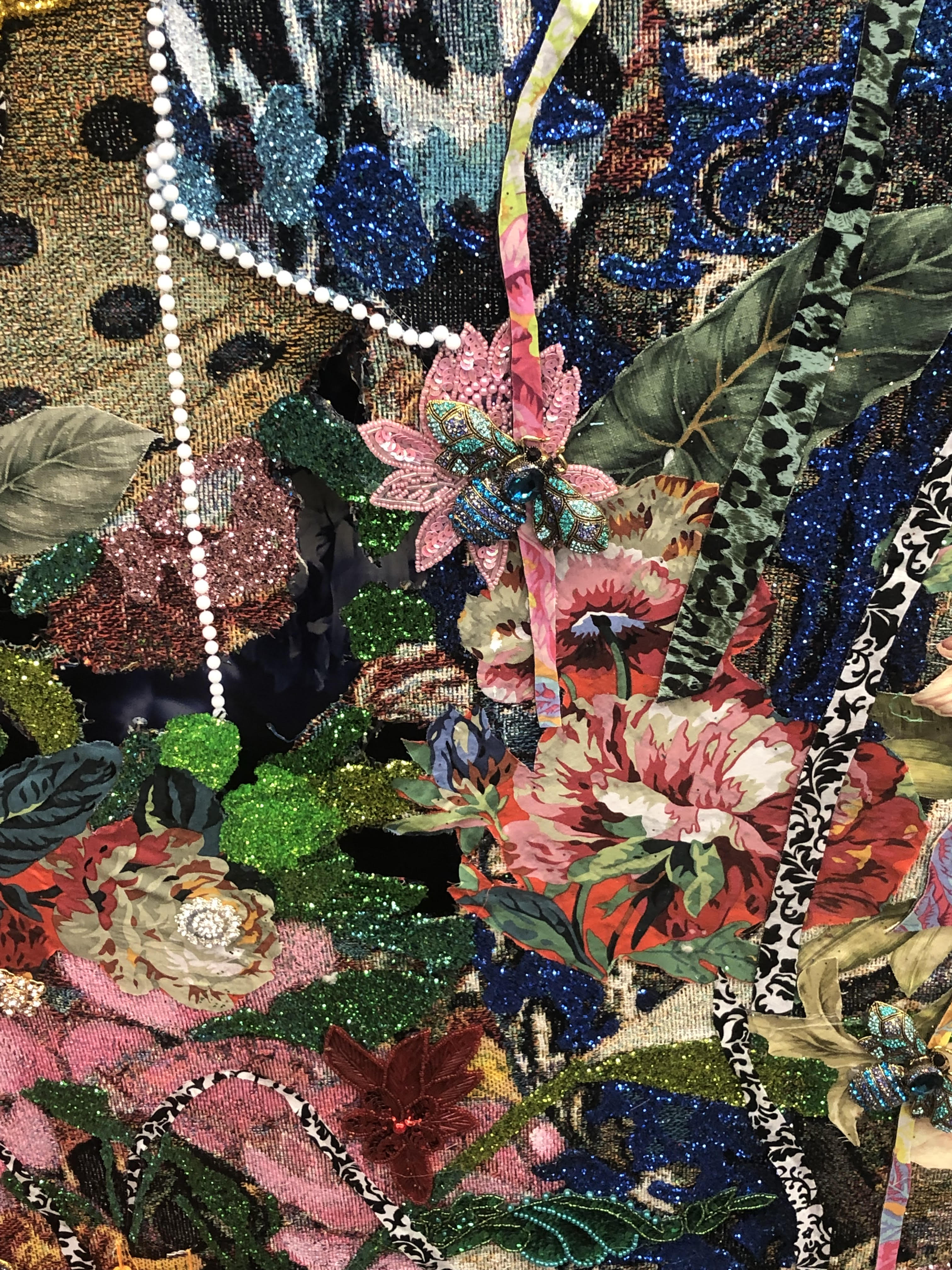 Jamaica’s first interaction with Christianity came via the Spanish in 1504 who were Roman Catholics, yet to this date, Protestant Christians account for 64% of the religious populations in Jamaica. The asymmetrical sense of each mural kindled an altar-like atmosphere. Altars have traditionally been used for religious purposes, specifically Christianity. In Patterson’s murals, she creates altars of dancehall culture that echo the fast rhythms through fabric representation of bling which is also a part of dancehall culture. The hand cut elements of her murals, flowers cut out of textiles with floral patterns, create a sense of environment – a garden, in the tapestries.

Patterson uses gardens as a space of duality – for beauty and for death. Much like the presentation in Chicago, Patterson’s first solo show in America, “For Dead Treez,” at The Museum of Art and Design in NYC presented collaged tapestries. But, instead of investigating primarily race and gender the adorned installations evoked elements of dancehall culture while simultaneously questioning masculinity. The understanding of the gardens and Christianity reveals to us a framework for humanity regardless of one’s belief system. In the story of Eden’s garden are concepts of loss, desire, separation, dependency, all emotions that were also evoked during the Atlantic slave trade and during post-colonial Jamaica.

An entirely new feature of the tapestries on view in Chicago are the black hands in various unnatural positions that appear throughout the exhibition. These hands seem to blend in initially but create a presence in how they stick out from the perimeter of the murals, it is as if they are performing some sense of action. The hands are placed in inverted positions revealing that these movements are forced to these hands, similar to the actions of how slaves were bond during their transportation to the West-Indies. Patterson presents to us grime issues of human rights through the use of black body parts integrated with objects that’s sole purpose is decorative and are inanimate through a means that attracts the viewer to inquire about what is in front of them and allows them to break down the issues in their own understanding of the context.

This powerful exhibition investigates what we desire and we are willing to bare. But, what we ignore is of equal importance. What we initially perceive as bear-like, in other words, perceived as uncouth, and outlandish, provide commentary on race and post-colonial identity. “…for those who bear/bare witness…” is soil for the soul, truly.