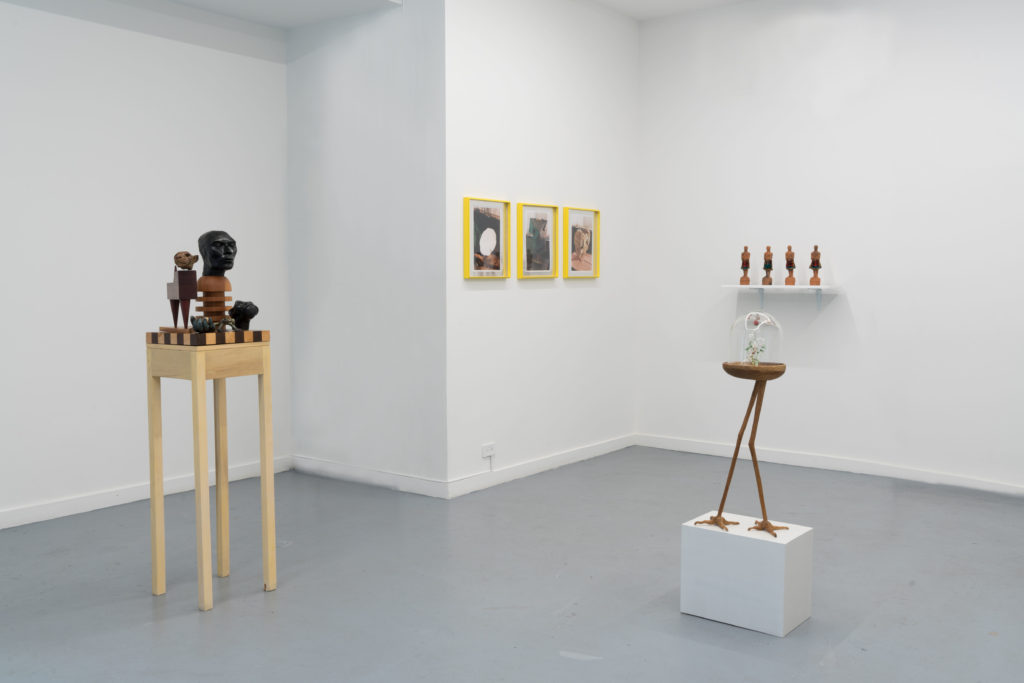 Proxyco, one of the newest galleries on the Lower East Side, is located on Suffolk, between Houston and Stanton. Mirroring the neighborhood’s rapid development, the gallery seeks to rejuvenate the offerings of Latin American art in New York. Founded by Laura Saenz, from Colombia, and Alexandra Morris from Mexico, Proxyco is dedicated to both contextualizing historical works by Latin American artists and promoting emerging and mid-career artists from the region.

The owners of Proxyco, seek to directly strengthen the ties between the US art scene and the Latin American art scene, an effort that can be seen in their current exhibition “Totems and Trophies.” The group show is curated by María Camila Montalvo. Montalvo is also the director of the hybrid space Liberia, located in Bogotá, Colombia. By creating a global platform for Latin American artists and curators working today, Proxyco is creating a fluid framework to value and engage with art that is informed by both a distinct cultural heritage, an ever-widening global perspective, and artistic discourse from the South.

Signaling a change in how art from Latin America is being shown and perceived in New York, this objective seems to concur with museum shows such as the Whitney’s latest exhibition “Pacha, Llaqta, Wasichay: Indigenous Space, Modern Architecture, New Art” and the Brooklyn Museums exhibition “Radical Woman: Latin American Art.” Taking advantage of this moment of increased visibility for Latin American artists, galleries, like Kurimazutto from Mexico, have opened shop in New York. Proxyco’s inaugural exhibition, in November 2017, “Talon Rouge: Six Artists from Mexico Revisit José Juan Tablada and his New York Circle,” sought to re-insert Mexican artists in the history of modern art in New York by showing works by Latin American artists championed by the poet, art critic, and diplomat José Juan Tablada during his time in New York alongside works by contemporary artists influenced by the multi-faceted avant-gardist. By the avoiding essentializing classifiers, Proxyco clearly becomes one of the galleries that is leading the expansion of Latin American art and how it is viewed, in New York.

“Totems and Trophies,” presents a collection of mystical objects, totems, and modern trophies by Guatemalan and Colombian artists Benvenuto Chavajay, Miguel Cárdenas, Luz Ángela Lizarazo, Juan Peláez, Iván Hurtado, Jorge Julián Aristizábal and José Sanín. A totem is a sacred object or symbol that serves as an emblem of a group of people, such as a tribe or lineage. A trophy is a tangible, long-lasting reminder of a specific achievement, and serves as recognition or evidence of merit. Thus, totems hold mystical properties from ancestral lineages, whilst trophies are products of our current world and remind us of the reward system inured to western cultures. To explore power and colonization, this exhibition juxtaposes the mythical concept of the ritual and its ephemera with the relational social objects of the western society. 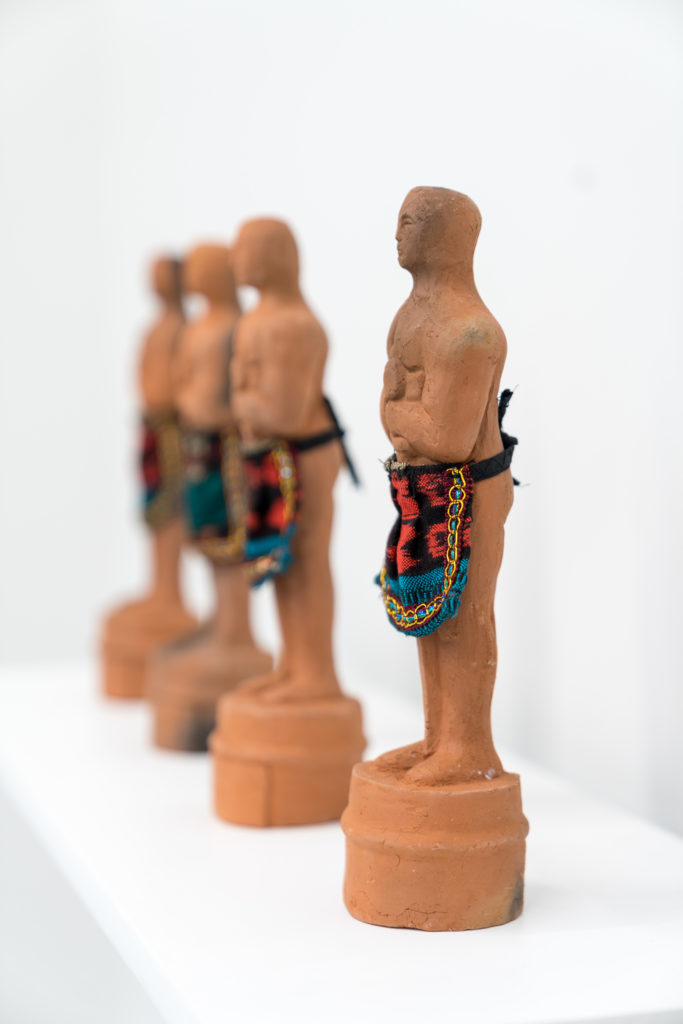 Although some works slightly miss the curatorial mark, others shrewdly illuminate it—such as that of the Guatemalan artist Benvenuto Chavajay. Chavajaty’s statuettes are made of baked clay extracted from the lake basin of his town San Pedro La Laguna, on the shores of Lake Atitlan. He works with clay using indigenous techniques local to his village. When the clay has dried he dresses his figures in indigenous ornamental aprons. His objects have an unmistakable totem-like property as he uses the materials his ancestors used to create ritualistic objects. However, as the title alludes, they resemble the Oscar statuette. Awarded to the most talented individuals working in the film industry, the Oscar is one of the most recognized trophies in the world. By merging ancestral and indigenous techniques to replicate the western trophy, Chavajay addresses issues of neo-colonization. 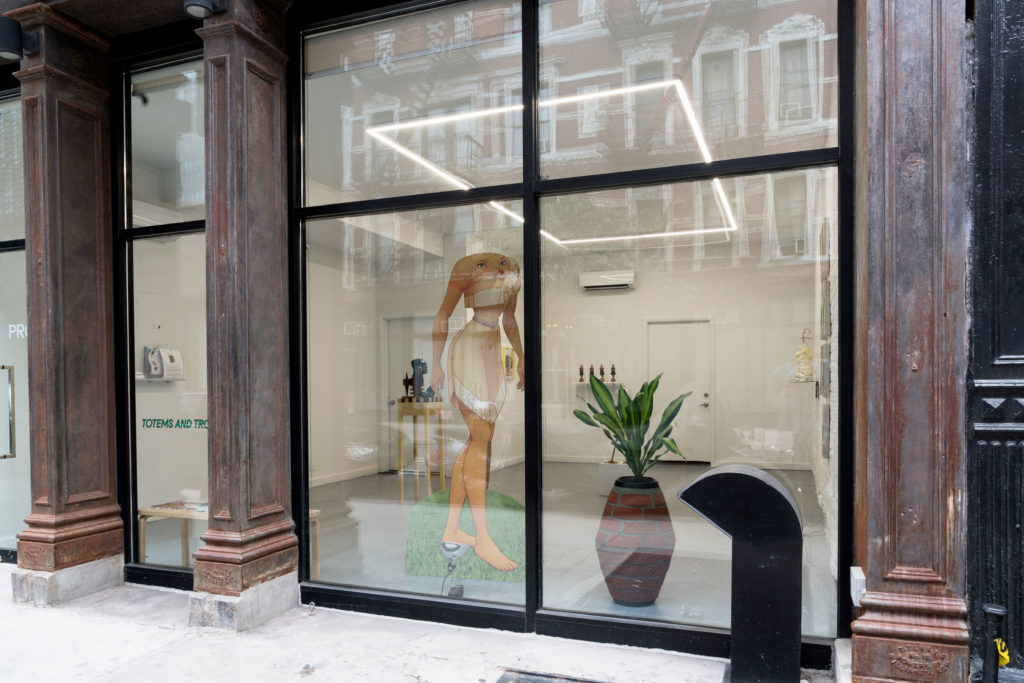 The Colombian artist, Juan Peláez, similarly plays with colonization in his art, which like that of Chavajay’s reinterprets his nation’s and regions history. Prominently placed in the storefront window of the gallery, stands his sculpture “Pocahontas,” decapitated. This cardboard sculpture depicts an “Acéfalo”—the headless monster used by European explorers to depict the natives of the Americas. The re-circulation of this hybrid character (half Pocahontas, half Acéfalo) reaffirms colonial history and its present state in modern society. By remixing this historical moment of colonization through a Disney character, the work alludes to the present capitalist world in which we live in, where colonial history still permeates depictions of Latin America in the West. 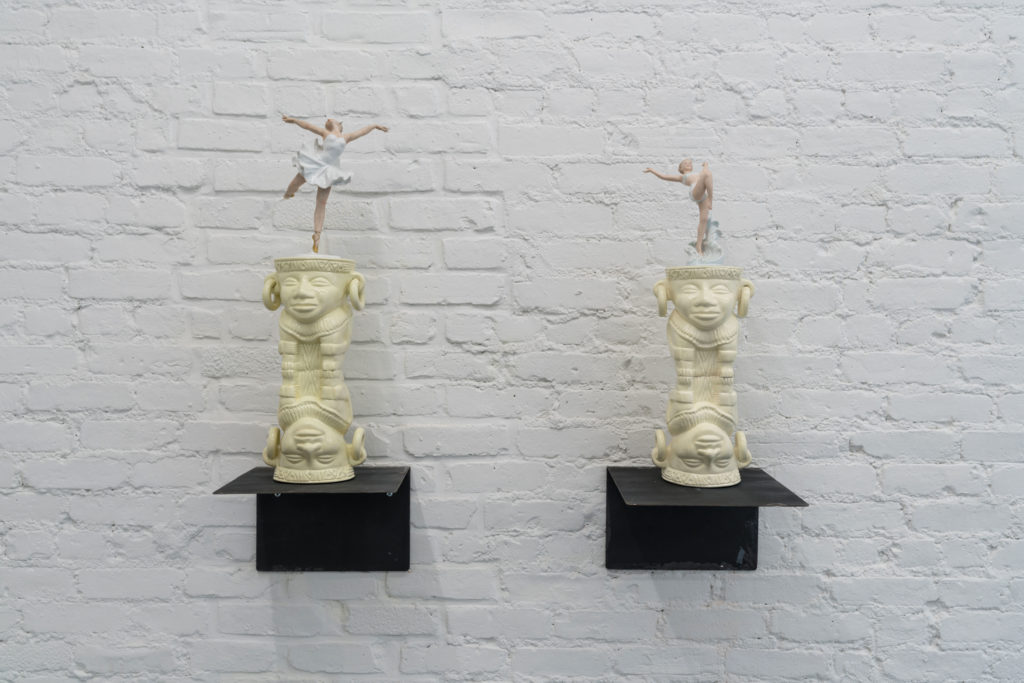 Lastly, the Colombian Jorge Julián Aristizábal’s work establishes a connection between pre-Columbian art and the cheap, industrial materials we use today in manufactured goods and construction. The totemic object depicts a “tunjo,” a small anthropomorphic figure used by the Muiscas—an indigenous community in the Colombian “altiplano cundiboyacense.” Originally made out of gold, Aristizábal has reinterpreted these figures in ceramic. He has added a porcelain pale-looking ballerina dancing on top of them as a decorative, western, element.  In Aristizabal’s figures, western and pre-Columbian practices are indiscriminately mixed, as he questions our cultural heritage and our complex cultural identity reminding us, to use Latour’s phrase, that we have never been entirely modern.

Many ancient rituals, totems, and rites in Latin America have been lost. Immense social processes, like colonization, industrialization, and modernization, have distorted our ancient practices. However, the works in this exhibition defy colonialism by revealing how the ancient lives in the contemporary. In this exhibition, totems lose their ritualistic meaning and trophies acquire totemic powers. The artists have acted upon a pressing need to go back and explore the past, only to discover that it prevails in distorted forms. With the increased visibility of art from Latin America at galleries and museums in New York and the emergence of shows curated by Latin American curators, there is fresh air within the Latino art community, being blown from the South.

TOTEMS AND TROPHIES is on view from July 12 until August 17, 2018, at Proxyco Gallery, located at 168 Suffolk Street, New York.

What Do You Know About Mexican Modernism? Gallery Talk at Proxyco 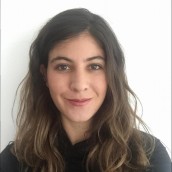