by The Editorial Team 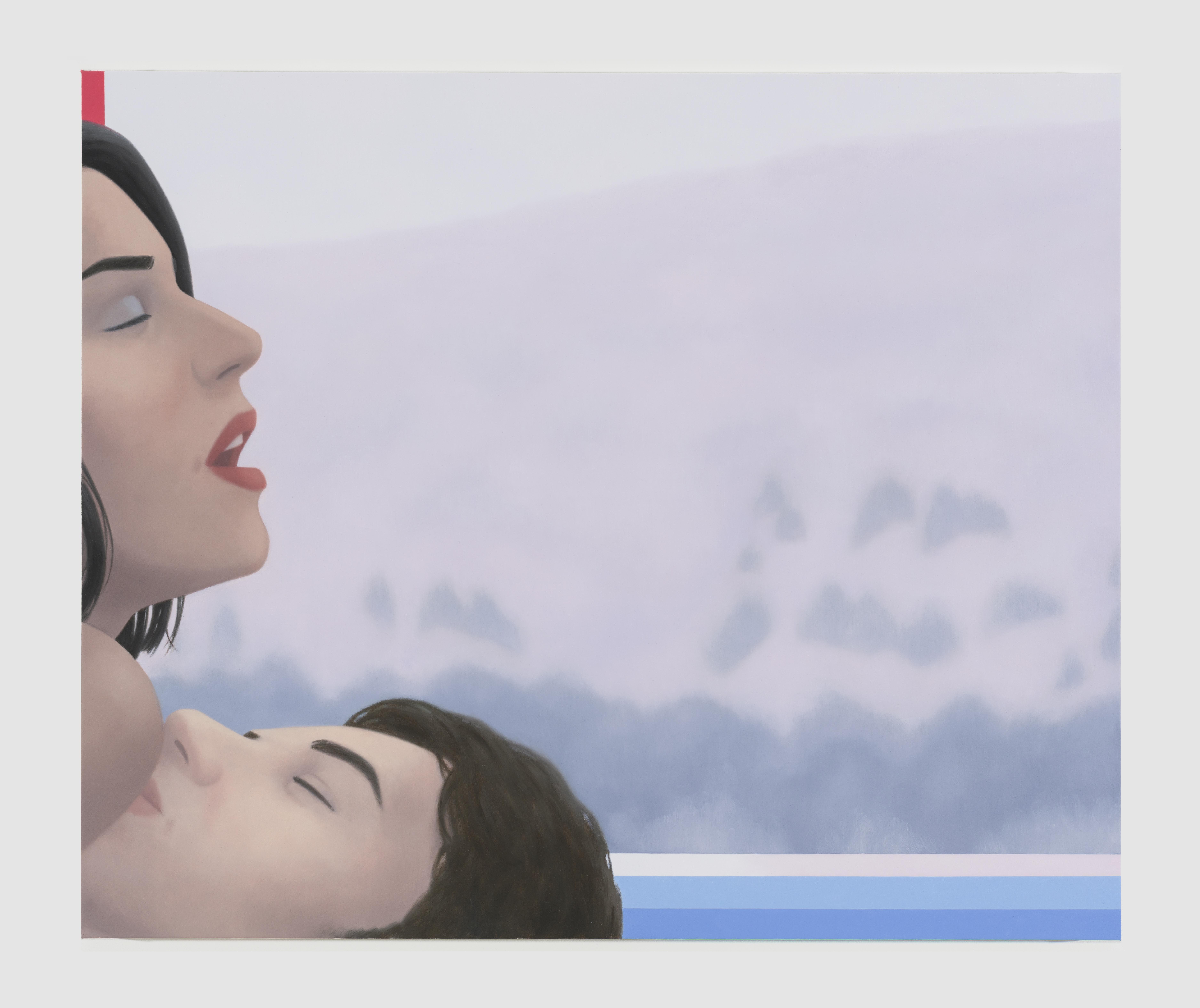 Ridley Howard’s latest exhibition in New York “Light Paintings,” features the painter’s signature cropped anonymous figures against landscapes and geometric backdrops, it is, however, clear that the artist is expanding his work thematically. In “Shape Visions” and “Outdoor Screening,” he tackles technology where circles, rectangles, squares, and a lozenge may be catalysts for various glowing screens and indicator lights. “Pink Sky and Plastic” and “Shades Rose and Blue” are both stylized scenes of women wearing sunglasses: Coachella, paparazzi, and Instagram culture come to mind. Howard’s work often appears static but in “Picture Window” and “Window Sill” he has painted couples embracing and in “Sundress” the lower body of a woman sitting crossed-legged in a chair with a decidedly sexual charge offers the work a clearer narrative and therein more movement.

Howard’s most recent body of work provides subtle, forceful, and a rather brilliant commentary on technology and its connection to posing and being seen. 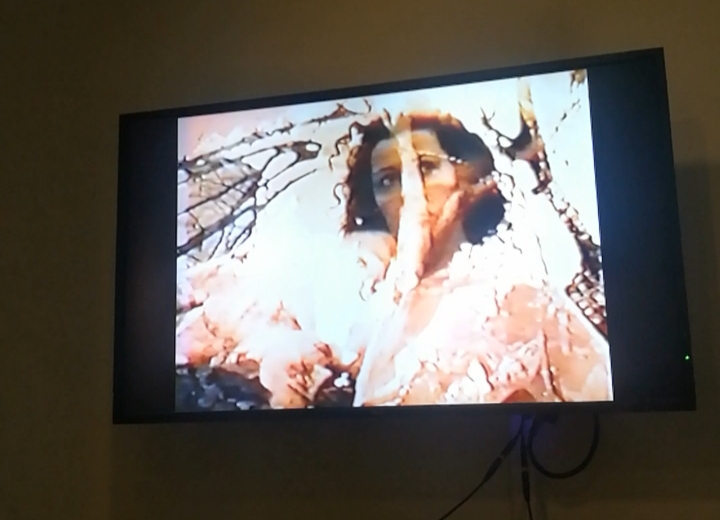 Countercultural, psychedelic, and wildly camp “The Secret Life of Hernando Cortez” is a 58-minute feature film starring Taylor Meade as Hernando Cortez the Spanish conquerer who together with multiple armies waged war on the Aztecs in 1518. The campaign effectively killed Montezuma the last Aztec emperor in 1521, thereby basically annihilating a civilization. In the film based on an improvised narrative, Meade and his consort the daughter of the Aztec emperor played by Ultra Violet proclaim their successes to the local population, frolic in nature, and engage in sex scenes where layered superimposed images create rich textures on the screen. There is also a blood sacrifice and adultery. Ultra Violet and Meade were both regulars in Warhol’s productions. Time and time again, despite going against her family, Ultra Violet’s character provides support and encouragement to Cortez to support his campaigns. The costumes by Tiger Morse are fantastic. 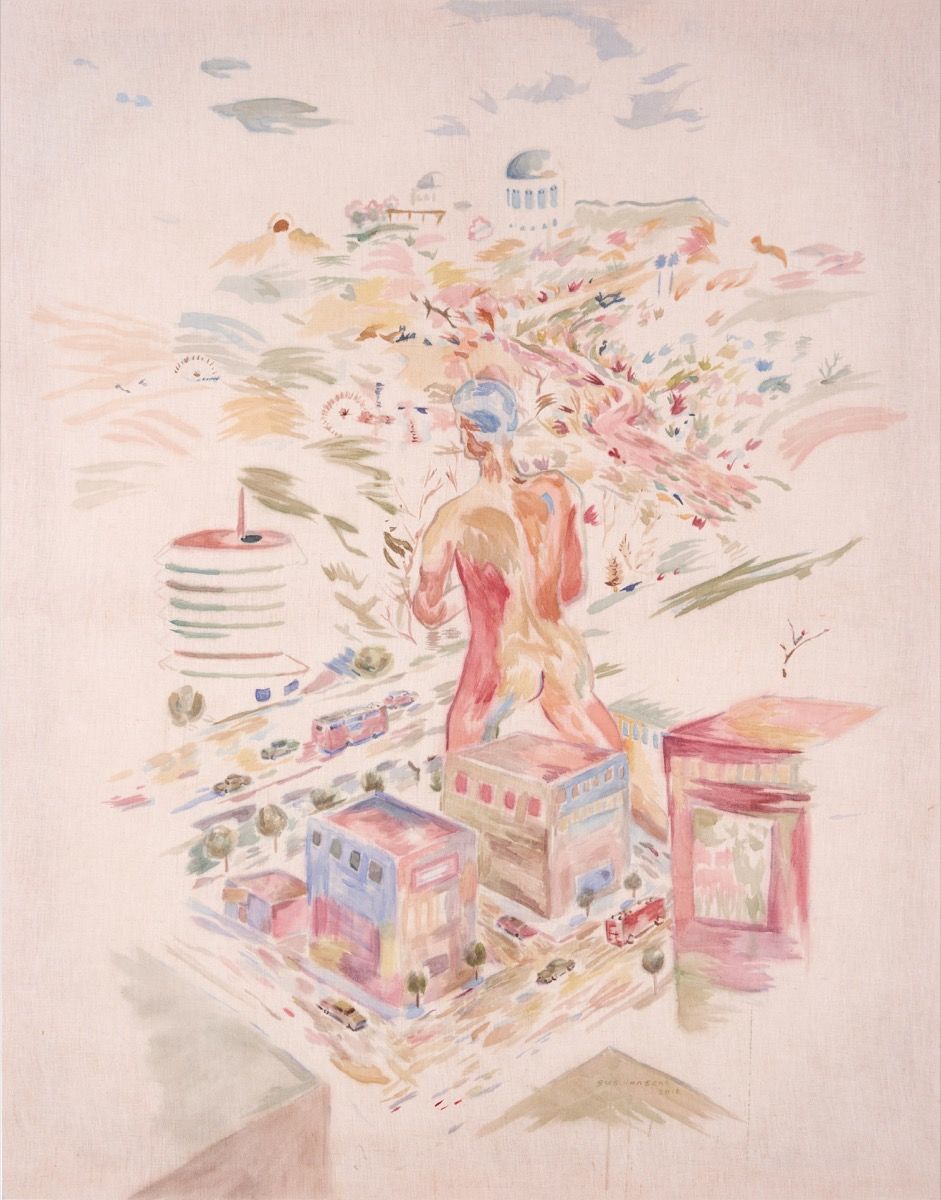 A striding nude male, a car, and sprawling L.A. cityscapes are the main features of Gus Van Sant’s large scale watercolor works. The auteur is based known for his critically acclaimed films that tackle complex subjects such as in the biopic of Harvey Milk (“Milk,” 2008), the Columbine school shooting (“Elephant,” 2003), and an adventure starring gay sex-workers (“My Own Private Idaho” 1991). Van Sant has lived in Los Angeles since the 1970s and has dabbled in painting since the 80s with solo exhibitions at the Musée de l’Elysée in Lausanne, Switzerland, Le Case d’Arte in Milan, Italy, and the Jordan Schnitzer Museum of Art at the University of Oregon in Eugene under his belt. The figure(s) in his paintings tower over and dynamically move through the city as they were totally free. About his painting practice, Van Sant has expressed that he enjoys the immediacy of a brushstroke. Van Sant is also an accomplished screenwriter, musician, and author. Personally, I love Van Sant’s aesthetic in films and enjoyed seeing how his mind works in painting – same goes for Harmony Korine who recently had a solo show at Gagosian and David Lynch whose work has been shown more extensively.

According to Artsy, Van Sant met gallerist Vito Schnabel at an Oscars party this past February and invited him to his studio. The next day Vito came by and offered him a show on the spot.