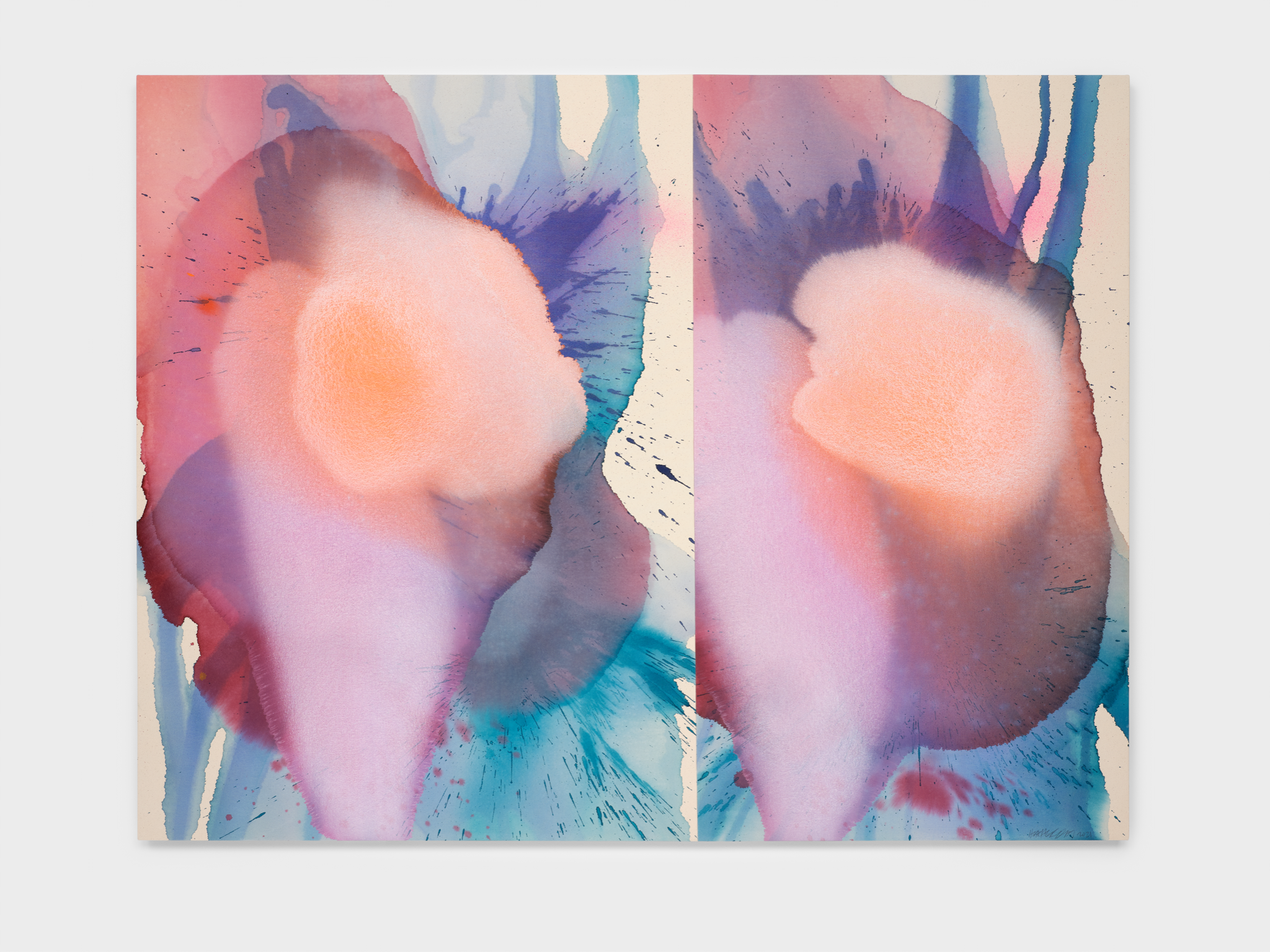 Nestled amidst the blue chip powerhouse galleries of Chelsea is the comparatively petite space of Anna Zorina Gallery. Showing both emerging and established artists, the gallery sets itself apart with its mission of exhibiting artists who promote positivity, intellectual exploration, and growth, both personal and collective. In Convergence, their current show of works by Heather Day, Anna Zorina spotlights some of the artist’s achievements over the last year. Curated by Ché Morales, Convergence is Day’s first solo show with the gallery presenting recent large-scale mixed media paintings and an immersive animation piece, a new medium for the artist.

With colors and shapes reminiscent of Helen Frankenthaler, Day’s paintings are often associated with the Abstract Expressionist and Color Field movements. Standing in front of Day’s works, the swaths of translucent paint appear to slowly flow across the canvas with a sense of both movement and stillness, as if the placement of colors is perfectly controlled. Much like Frankenthaler with her soak-stain technique, the process of making Day’s works involves an element of chance. Working on rough, worn canvases that are cut and stitched together, Day floods her surfaces with paint while pushing, scraping, and smearing the colors. The fast act of pouring defies the waves of pigments slowly moving across each work.

“There’s always an element of chance or experimentation at play. Repetition and muscle memory allow me to choose when I want to tap into that.” Day said of her technique. “As a painter, I’m skeptical of formulas. I was even skeptical of my own muscle memory because it represented a rhythm I wanted to break in order to be able to create something that was new, or unlike my past approaches. Once I consciously moved away from that familiar feeling, I found that I was able to access it when I wanted to without running the risk of being beholden to it.”

The artist’s blending of control and chance is seen in Convergence, the title piece of the show. With her characteristic stitched canvases, the painting features similar compositions on each side. Made in matching layers of translucent paint, the two images take on the same general shape with complementary drips, splashes, and subtle streams of color. While muscle memory is certainly at play to repeat the actions of pouring and pushing, chance is equally present, allowing for subtle variations.

Nearby, the artist has further showed her mastery of the technique in Mirror. Like Convergence, the two sides of the work have similar colors and organic curves on separate canvases, which the artist has flipped and reversed as if viewed in a mirror. The colors, vibrant pinks and blues, pull the eye in a circle through the looping, swirling shapes. Over the curves, Day has painted two bright white amorphous rings that appear to be on the verge of spinning. Next to Mirror, the painting Glow balances the bright, floral hues with warm bands reminiscent of a glowing sunset over water. The thin size of the right canvas offers a narrow peak at the vibrating strips of color, as if viewed through a slim window.

Also included in the show are paintings with dashes, which the artist calls test marks that she initially began making on her studio walls. Seen in Sing the Mark, the panel of test marks spills onto the right canvas, which contains bursting pools of orange and blue. Reminiscent of Jasper Johns’ crosshatches, the sprinkles of color balance the heavy swaths of paint.

Day explained that she began bringing these test marks onto her canvas to shed a candid light on her process. “I saw them as more authentic or powerful because they weren’t overly scrutinized or edited before reaching the canvas…The test markings span the barrier of one canvas and another, mirroring the way that seeds of ideas for new pieces often span from one side of my sketchbook to the other.”

Day further sheds light on her process in an immersive animation piece. Hidden in a small room behind a vibrant blue cloud that the artist painted directly onto the gallery wall, the installation is Day’s first formal presentation of digital art and reveals the behind the scenes evolution of a painting. With an emphasis on mark-making, the animation offers a close look into details of a process normally kept hidden from the viewer.

Day explained, “Through animation, I am able to treat a painting as an unfolding performance in which I’m the conductor. In the rhythm of repetition, you see the inevitability of human error, which is something I embrace rather than avoid.”

Taking this performance further, Day edits the animation in post-production, adding digitally rendered markings to the final work, which she calls a “collage of mediums” that blurs the boundaries between paint and pixels.

“Animation lets me dive deeper into themes like mirrored patterns and the inevitable tension between control and chaos.” Day said, adding, “The pandemic was a reminder of that tension. In the context of my work, it was this rude awakening and forced me to reassess the process. That was the aha moment. I was already cutting up my paintings, figuring out how to stitch works together…I realized I could use animation as well as film to further express the painting’s narrative.”

The painting’s narrative is both captivating and clear as Day takes the viewer on a journey across the surface of her works. Exiting the animation and returning to the paintings on the wall, it’s hard not to imagine the artist’s swift, confident motions, as well as the thoughtful decisions that led to such dynamic, entrancing compositions.