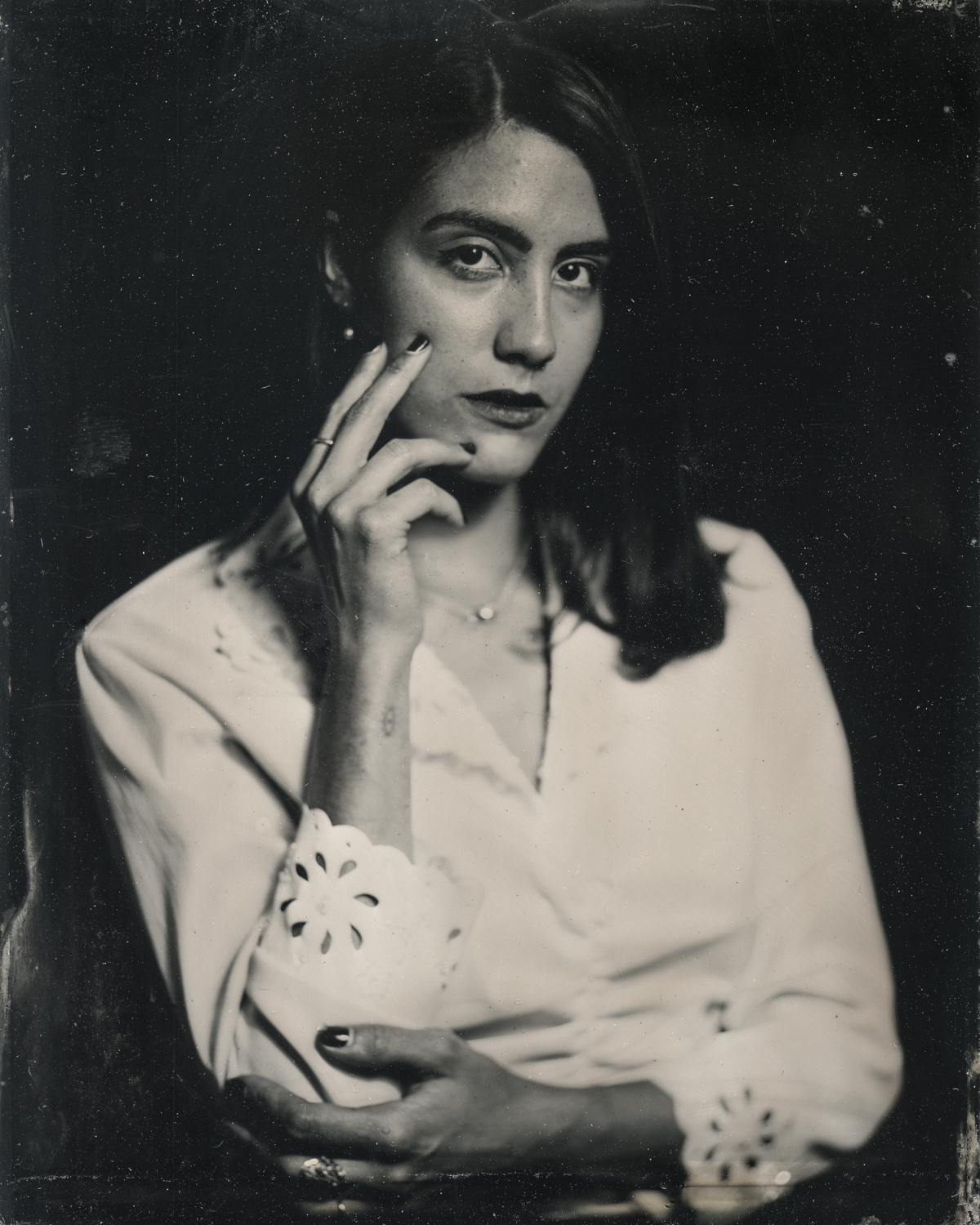 Over the summer, I reconnected with visual artist turned curator Stephanie Cortazzo and was introduced to her conceptual collage series, Cosmic Crisis at the Brooklyn Collage Collective’s group show in Bushwick. I was immediately struck by her ability to pair clippings from old school publications like National Geographic, Playboy, Life and Time that otherwise would never be on the same page, yet they somehow work to create a new, visual narrative. In her collage, A Letter From The Sun, Cortazzo stages a close-up shot of a 1960’s model surrounded by an open eye, a moon and a streak of lightning. She successfully plays with the suspension of disbelief to imagine the subject matter dealing with the tribulations of love and attempts to capture on paper the chaotic, dark side of romance. Cortazzo states that:”In several of the works, you can see an act of chaos as the central subject matter, i.e., a lightning bolt, an atomic bomb in flight a volcanoes, juxtaposed by the human reaction which is conveyed through a woman trembling in anger or a cropped image of a pensive expression. In scenarios where there is both a male and female character in the same work, the male can be seen toying with or summoning the woman through body language. Every piece assembled aims to evoke the raw emotion one feels when lost or manipulated in love.”

This Saturday, Cortazzo is focusing her attention on a new, one-day-only group show called Resurge that will be open to the public from 12-6 PM at Bento on Hudson. Featuring 19 female artists recently graduated from art school, Resurge is a celebration of female empowerment, and a collaborative effort to address the discernible gap between men and women in the art world. I spoke with Cortazzo to get the low-down on her upcoming show as well as to gain a better understanding about her collage process. 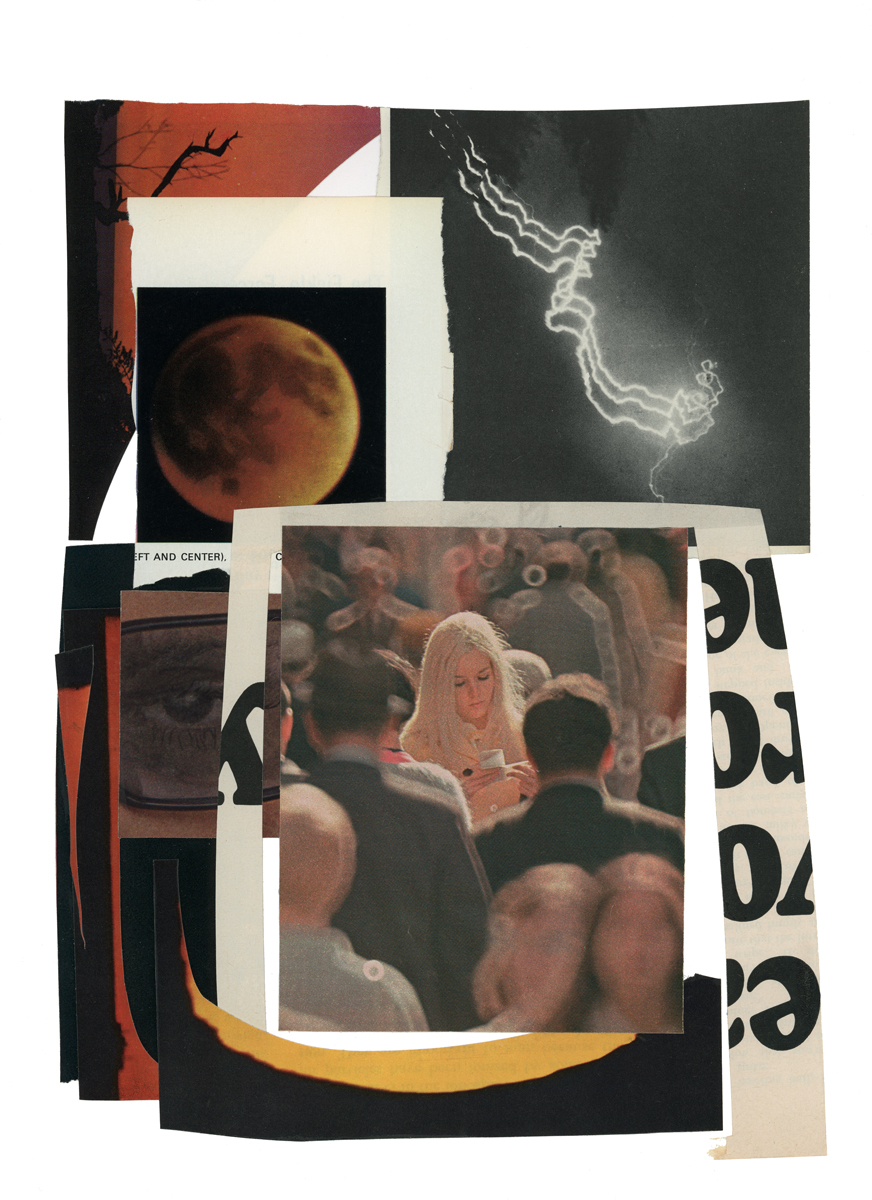 Alexandra Israel: Your upcoming exhibition, Resurge, celebrates talented women and non-binary artists. Rock on! Can you share a little bit more about the exhibition, and why the word “resurge” seemed fitting for this type of exhibition?

I’ve been looking for a reason to reconvene with my fellow colleagues from art school. With all the great emerging talent from ‘15 (my graduating class) and ’16, I felt it was time to round everyone up to celebrate the groups’ combined motivation to extend our art-making practice outside the incubator of art school. Resurge will feature 19 select alumni from Mason Gross School of The Arts at Rutgers University. I wanted to honor Mason Gross’s interdisciplinary structure by including a range of mediums including painting, photography, drawing, mixed media, video, and design.

We were all in a vulnerable state; exposing ourselves in hours of critique, documenting our adolescence, and learning what it meant to be an artist.

Mason Gross was unique in that we were introduced to other mediums outside of our concentration very early on in our undergraduate career. I’ve been lucky enough to maintain a relationship with my colleagues and many of the participants are close friends and even roommates. We developed an indescribable bond in art school; none of us were sleeping, we were reading Charles Baudelaire until 3 am and painting in our studios or running around campus taking pictures. We were all in a vulnerable state; exposing ourselves in hours of critique, documenting our adolescence, and learning what it meant to be an artist.

Resurge will be our first time exhibiting together as a group since our respective thesis exhibitions and will showcase the artists’ progress. I wanted people to think of this show as a comeback. I felt inspired to call the show Resurge because I wanted the title to convey the power of many creative bodies reuniting under one space. 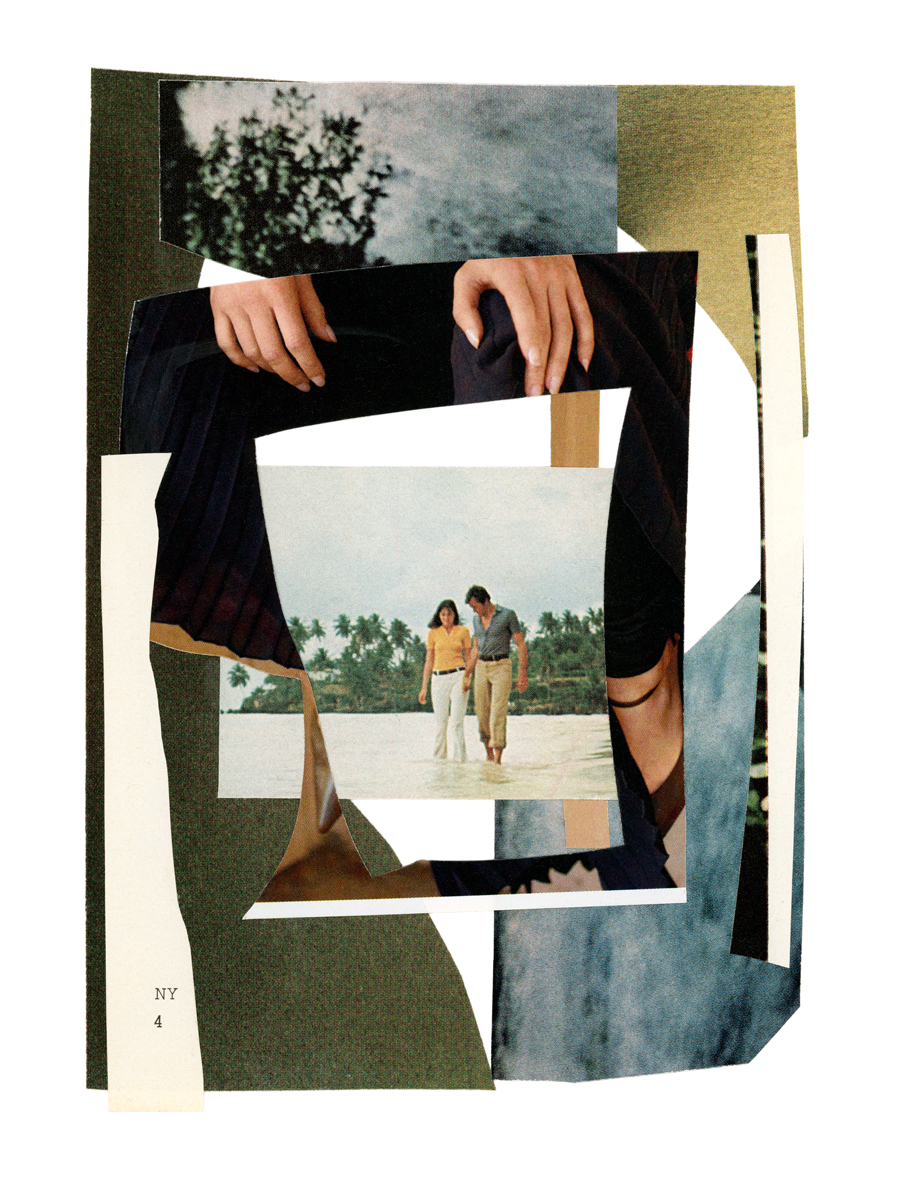 Stephanie Cortazzo, She Who I Will Never Be (from the series ‘Orange & Green), 2017. Collage.

Is the work or the exhibition in any way a reflection of the Me-Too Movement?

Definitely. It is a direct response to the Me-Too Movement. Linda Nochlin’s “Why Have There Been No Great Woman Artists?” also inspired me to put on the curator hat. Nochlin asked the difficult but discernible problems in society and the arts. I feel that it’s important to cultivate environments and communities where female artists can thrive. Gender disparity in the arts is being brought to light more than ever with the Me Too Movement forcing the industry to address opportunities for women artists in galleries and museums. I’ve gotten to witness first-hand the tribulations of emerging women artists and the male-dominated art scene in Chelsea.

I want to celebrate women and non-binary artists, specifically the artists in Resurge. Although society says that woman are fueled by competition my experience at Mason Gross was anything but. There was no hierarchy between concentrations – the painters were no better than the photographers, the photographers no better than the graphic designers. I felt motivated and supported by the women artists in my class. 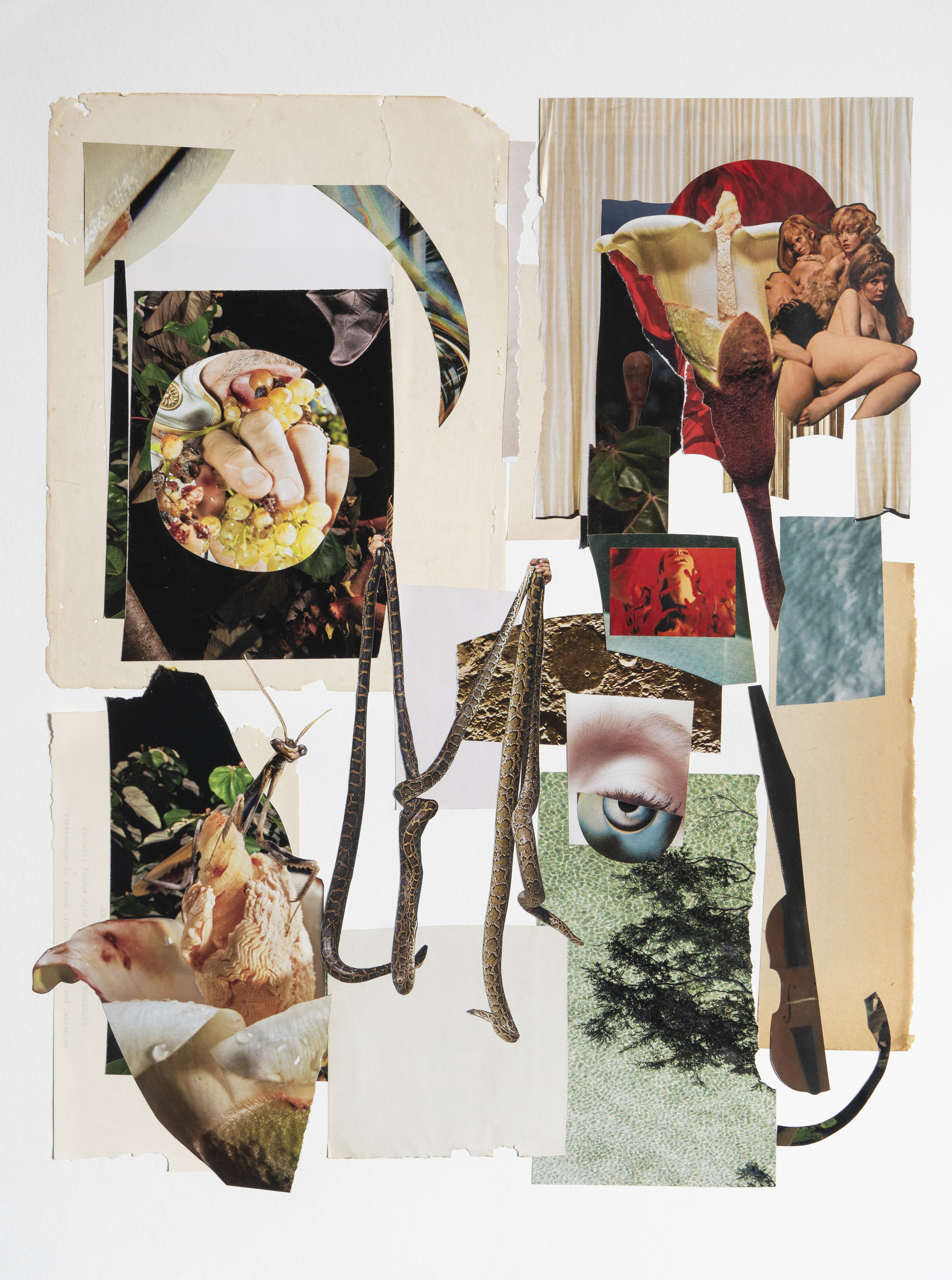 You’ve worn many hats having worked in development, as a gallery assistant, an artist and a curator. How do you feel like these different worlds collide?

My experiences working for and with other artists has significantly influenced my practice. My first gig out of college was interning for photographer and videographer Maxi Cohen. It was a huge honor to work with Maxi and it was crucial for me as a young artist to witness the daily grind of an established woman in the arts. I enjoy being a jack-of-all-trades – I consider myself a chameleon in my professional career, artistic practice, and as a person. There’s this flexibility in creative industries where I’ve found that there’s less pressure to assume a linear career progression. By not following one trajectory, I’ve been able to take the skills I’ve learned working behind the scenes in fundraising and exhibition planning to drive my own personal projects.

I’m excited to say that Resurge is my curatorial debut. It’s been a pleasure coordinating this show with my colleagues. We are working towards our own personal goals to reach the expectation we have for our artistic achievements and we’re fortunate enough to share that experience as a group. 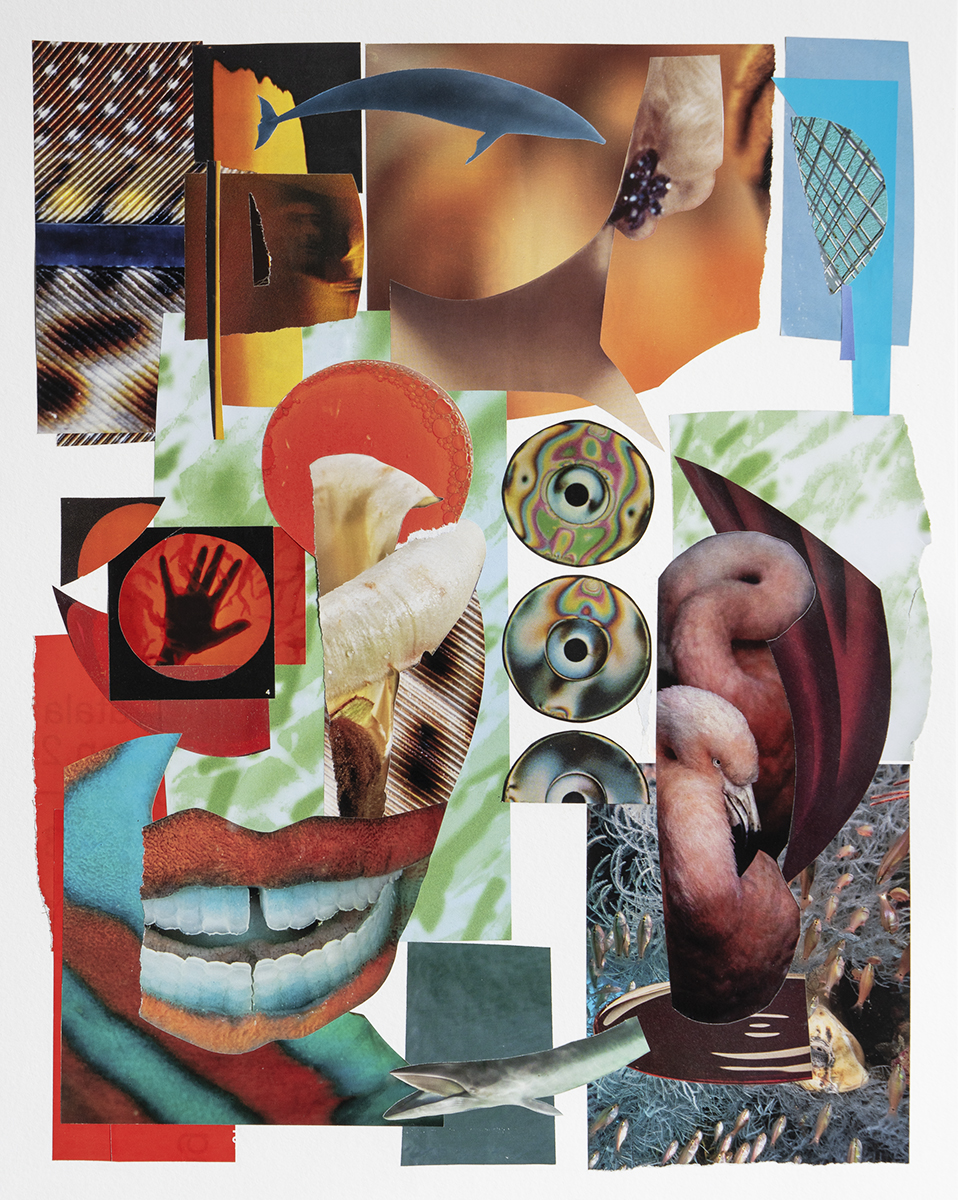 Since you work mainly with collage and mixed materials, are you drawn to artists who also incorporate a wide array of mediums in their work?

Yes! I am constantly looking at other collage artists. Collage is much newer medium to me than photography. I’ve been working with paper and mixed media for about four years now and am just starting to feel like my concepts are aligning with the composition. I’m interested in art that challenges or subverts our idea of the medium.

Have you ever thought about exhibiting your “Voicemail” series that is up on your website? Can you go into a little further detail about that project and how it folds into your artistic practice?

It’s funny you ask that – I’ve been thinking about how to present the audio files more and more. I thought about presenting it at Resurge but I’m still collecting material. Voicemails is a project that started in 2015. I compiled voice messages from my Dad from 2013 – 2015, the peak of my art school depression. My Dad’s the worst with voicemails. He always forgets to hang up the phone before the beep. He would call me daily to check in with me and would sometimes forget to hang up and I would get these hilarious clips. Other times he is consciously leaving me messages filled with worry, concern, and uneasiness. My parents have been divorced since I was ten so my Dad and I spent a lot of time on the phone when we couldn’t see each other. The messages became a sort of album of my relationship with my Dad for those few years. It’s interesting to me how the voice messages as a whole create their own script. I’m collecting more voicemails as the years go on from different family members and hope to make it a ten-year project.

I know that you incorporate images found in different publications in your collages, but do you always have a set theme or idea in mind?

Initially, collage was a way for me to step outside photography. I was frustrated by the mechanics of the camera. Yes, the camera as a device can be very nuanced but ultimately, I felt reduced by the act and wanted to engage my body more in the process of making art.

Through collage, I was able to bring physicality to my art practice; to rip, slash, tear, cut and paste while still working with photo-based images. I became mesmerized with the process of assemblage and found that the workflow was almost machine-like. I don’t always approach a new work with an idea; I like to play with the cutouts for a few hours before I start gluing. It’s fun to let the pieces move around the paper until the composition makes sense.

I source from National Geographic, Playboy, LIFE, TIME and color aide and use relatively anonymous or non-descript images so that the viewer can insert himself or herself or more easily relate to the story. The setting in my works typically takes place in a different galaxy, planet or supernatural civilization. I like to challenge the surreal space that assemblages allow for, but I also like to be a logical collage artist fusing current issues into my narrative using an analog process.

What is coming down next in the artistic pipeline?

I’m really excited to curate more this year. In 2019, I’ll be working more closely with the Brooklyn Collage Collective. I will be co-curating an exhibition on Valentines Day titled Fuck Love that will feature 8 Brooklyn based mixed media artists.

In the upcoming months, I will be showing larger scale collages. I’ve been challenging myself to go big. It’s hard for me to up the scale but it’s paying off. You can see a few of these work this Saturday at Resurge.

Come join us at the opening reception of Resurge on Saturday January 12th from 2-6 PM at Benton on Hudson (675 Hudson Street, 5th Floor). Follow Stephanie Cortazzo on Instagram.