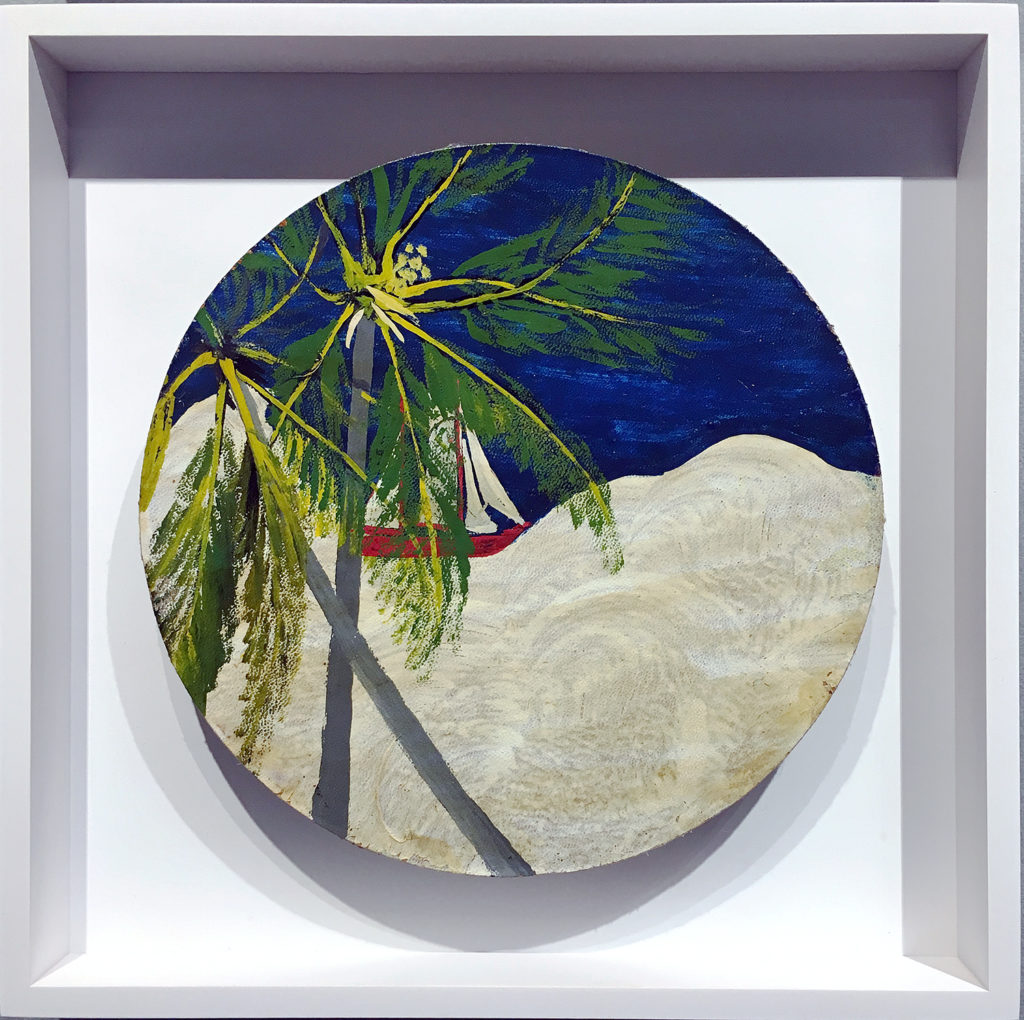 As the art world has grown and becomes less hierarchical, Outsider Art has increased in popularity. Held in New York, since 1993, and premiering in Paris ten years later, The Outsider Art Fair is central for the dissemination of Outsider art. Programming at folk art museums, traveling museum shows, and sales at major auction houses that focus on Outsider and so-called Vernacular art has also supported the expansion of the field. But, what is Outsider Art and who coined the term?

To describe art created by marginalized groups beyond the mainstream art world, the French painter Jean Dubuffet first coined the term “Art Brut” in the 1940s. With the help of Andre Breton, he collected work by children, folk artists, and, most predominantly, the mentally ill. Cultivating their practice outside of art institutions, these artists did not adhere to traditional notions of beauty and were instead, in his words, driven by “instinct, passion, mood, violence, [and] madness.” Introducing “Art Brut” to the English speaking world, the English art historian Roger Cardinal published the book “Outsider Art” in 1972.

Now the term is used to describe artists with disabilities, who have been or are institutionalized and incarcerated, folk artists, and nearly always those who have not had formal academic training or training in art institutions. Often, outsider artists are discovered after their death – leading us to the complex question: is unearthing and monetizing on these life stories and artworks exploitation, paying tribute, or both.

Many galleries the Outsider Art Fair incorporate both mainstream artists and outsider artists in their program. The founder of Shrine NYC, Scott Ogden, began collecting outsider art in college, the art form, he tells me, expanded his perception of what art can be. “Outsider art is important as at its purest, it pays absolutely no mind to the art market. These makers are fulfilling their own needs and relating their private visions for themselves only, which translates to such incredibly unique and original artwork,” he says.

Although it is growing, the best works of the outsider art market are priced lower than contemporary and modern artworks. As a result, collecting art from self-taught artists is more accessible to less moneyed collectors. “The Outsider Art Fair is the best place for collectors to get an introduction to the work of self-taught artists. The market for outsider artists continues to expand each year particularly with emerging collectors,” says Dallas-based art advisor Jennifer Klos who has a niche interest in educating emerging collectors.

Whether they are driven solely by passion, the therapeutic benefits of art, or both, I have detailed the rising stars and artistic highlights from the fair this year. 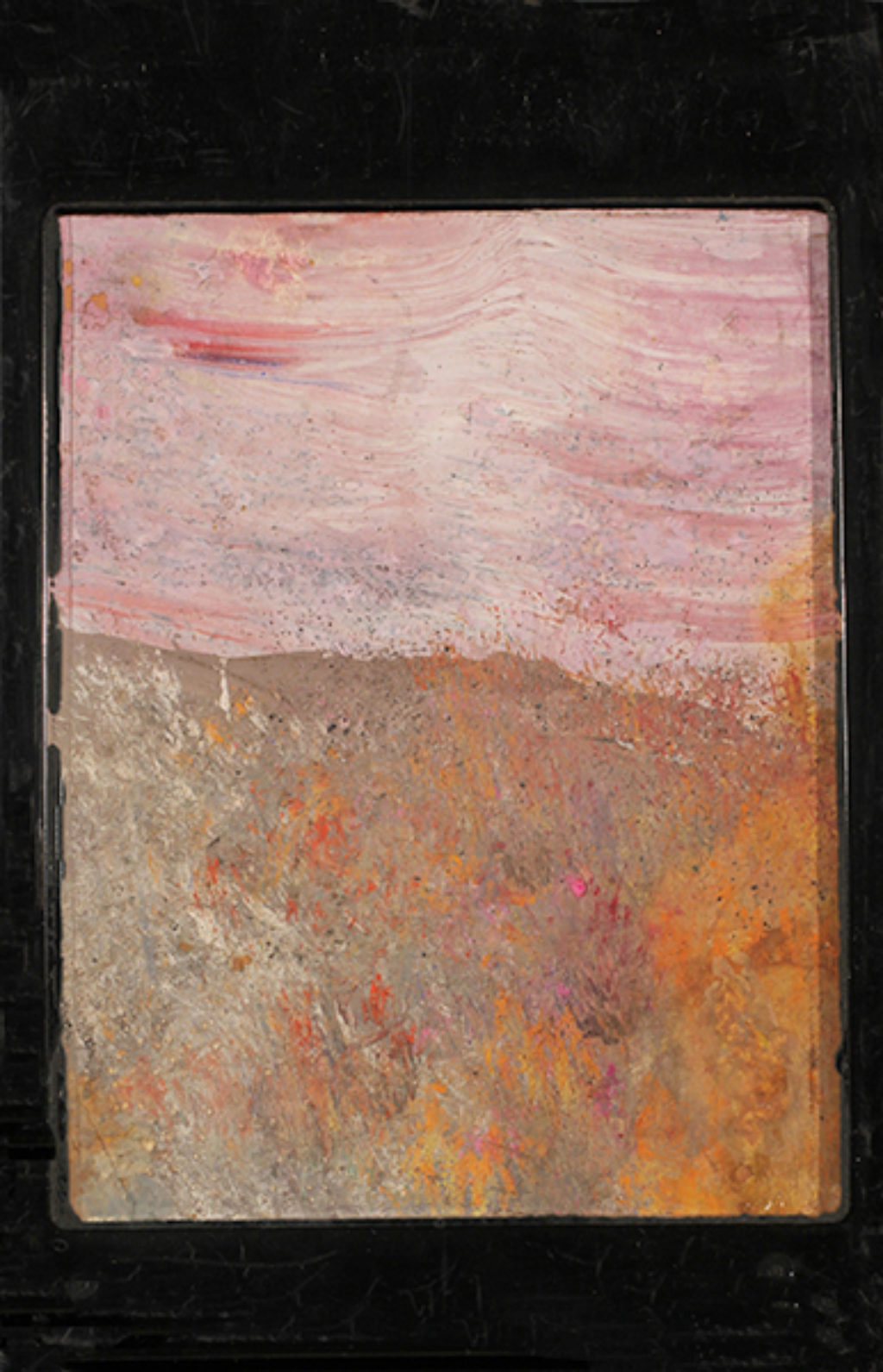 In 2017, eight years after his death, Frank Walter got his big break when he was selected to represent Antigua at the Venice Biennale. The rumored schizophrenic and prolific self-taught painter, philosopher, and poet is also the topic of an upcoming solo-show at a major American museum. Artists from Europe and North America dominate the outsider art scene, so the rise of this Caribbean artist plagued by a crisis of racial identity is timely and sparks new conversations in the field.

Born into a family of sugar plantation owners, Walter spent his early life cultivating his intellectual interests in the upper echelons of Antiguan society. He attained success as a plantation manager. In the 1950s, however, his outlook on life changed when he traveled to England. With an Anglophile upbringing he expected to be accepted into European society, but his qualifications did not translate well and he was met with racism and discrimination finally finding a job as a janitor. Upon his return to Antigua, society had also changed and he was unable to find his way back in. He suffered from hallucinations, delusional thinking, and eventually retreated into solitude.

Walter often worked with found materials. “Lavender Sky” is painted on the back of a polaroid box and is a soulful depiction of the Antiguan sunset. He spent the last part of his life creating art and recording his ideas of the changing world in a small house perched on a mountain on his family’s land.

Like Hilma af Klint, who foresaw an exhibition of her work in a circular building and is now showing at the Guggenheim, Walter envisioned a retrospective of his own, something that is now coming to fruition. This prediction and others are parts of his inner-life that often spilled into his artistry. How often do you see work that explores the complexities of Caribbean identity through art? Not often. The artist’s works include painting, sculpture, photography, and some 25,000 pages. Thelma Golden, Studio Museum in Harlem’s director, is a fan so I hope to see more scholarship and institutional attention on this prolific artist. 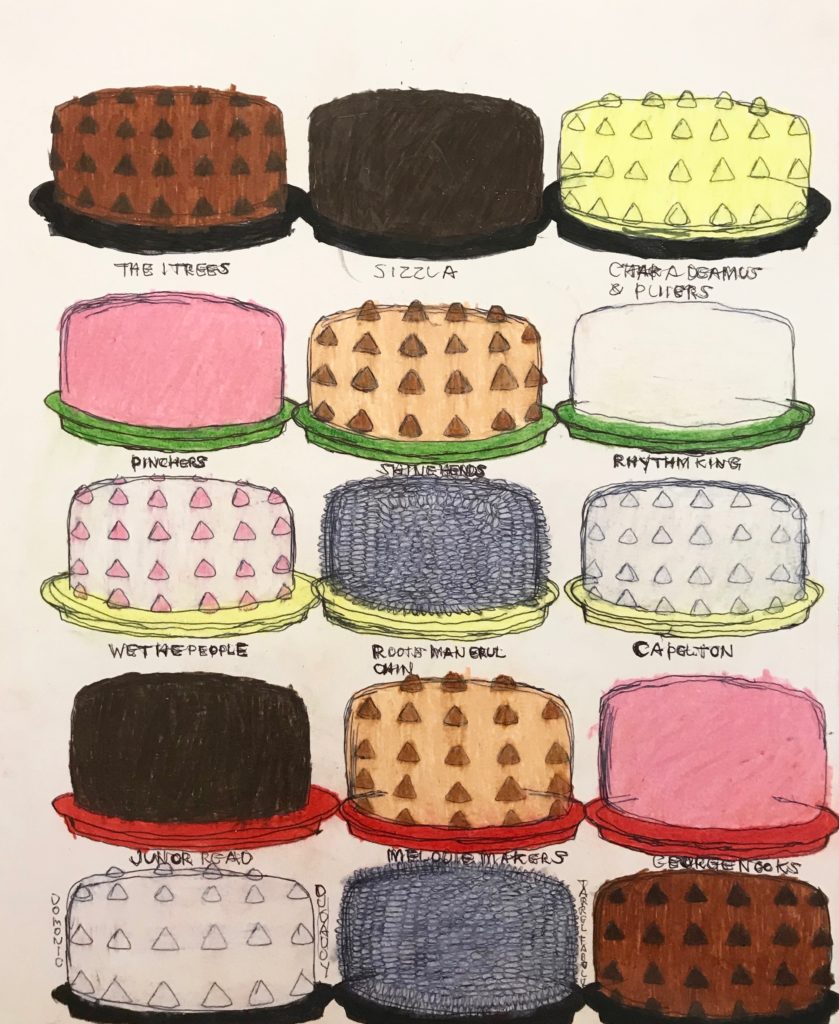 As Outsider art has become a more recognized art form, Outsider artists can rise to prominence and participate in the art market during their lifetime. LAND Gallery is a non-profit space in DUMBO that offers a day habilitation program that “nurtures the talents of participating artists while integrating individuals into the community as professional artists.” (And, they accept Medicaid!) So, in addition to therapeutic art making, the program supports artists with developmental disabilities to launch and sustain their careers.

When Sophia Cosmadopoulos talks about her stall of artists it is with a twinkle in her eye, as LAND’s gallery director, she is immersed in most of their studio practices. I was immediately drawn to Kenya Hanley’s works, or desserts, on paper. Not because I have a sweet tooth, but because they are full of humor. Hanley has become one of LAND’s more popular artists and when he was commissioned to illustrate he simply drew piglets wrapped in a blanket for the menu item “pigs-in-a-blanket,” Sophia laughs. The works are reminiscent of Wayne Thiebaud’s pastel-colored cookies and cakes, but there is a strong link to pop culture, desire, and with their catalog like presentation: organization. The artist draws what he wants to eat, the forbidden. And, a music lover, he also incorporates music in his captions and desserts in inventive ways. Does Martha Stewart know about these? Someone should send one to her for her birthday. 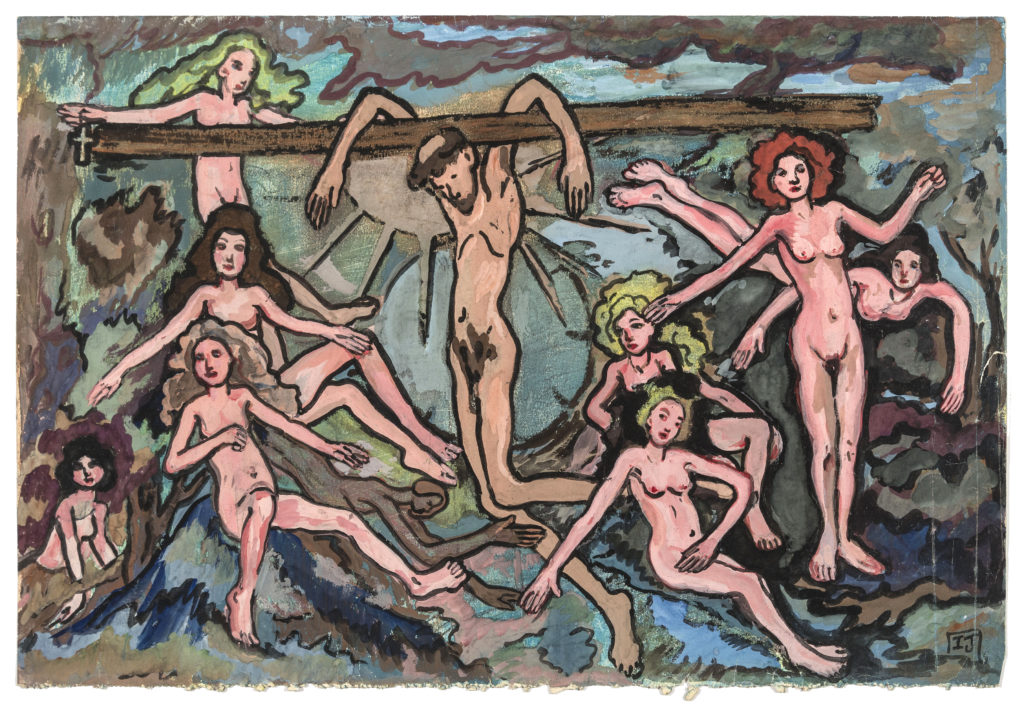 Shrine NYC brought a selection of works from the psychiatrist and painter Dr. Alec C. Dalzell, now owned by his descendants. Influenced by Hans Prinzhorn’s book “The Artistry of the Mentally Ill” (1922), he encouraged his patients to create art, advocating that it benefitted them. The doctor’s comments on his carefully curated collection show little interest in identifying styles with pathologies, Charlotte Riordan of the auction house Lyon and Turnbull that first brought his collection to market, comments. Instead, Dalzell was interested in finding the roots of art by linking creativity and mental illness.

One painter particularly caught my eye, Miss Inger Jensen’s paintings distort religious motifs in compositions that evoke masterworks of the Renaissance. In “Prestige” a male figure with a tonsure hangs, as if crucified, on a long branch. Around him eight nude female figures with flowing hair frolic in a forest scene. A blonde with a crucifix in her left-hand towers in the left side of the painting. Was Miss Inger Jensen deeply religious? Does the work comment on gender-roles?  And, most importantly is the work a tribute to Christianity, or a critique?

Most of his collection, amassed between 1930-1960, come from the Friern Medical Hospital where he was the Medical Superintendent. During his time there he also organized several exhibitions for staff and patients to showcase the works. In 1945 a large influx of patients from Eastern Europe traumatized by war were institutionalized, many of their works were collected by Dalzell. When the practice of heavily sedating patients to control them better was implemented, Dalzell’s collecting came to an end as patients no longer were able to create works with the same intricate details and vibrancy.