Artists on Coping: “Having a Voice Means Listening Up” Reece Cox

Joan Miró (1893-1983) was in Paris when the Spanish Civil War broke out in 1936 and stayed in the city until the German invasion drove him to return to Spain, in 1940. Amidst this period of extremism what appears stronger than the tensions between revolutionaries and conservatists is Miró’s dogged pursuit of painterly innovation and an emerging whimsy characterized by childlike freedom of line and exuberant colors that would come to dominate his later work.

“Joie de Vivre,” presented virtually, by Zeit Contemporary Art, is a motivating exhibition that showcases artists who in times of duress have produced capricious and joyful work, and art simply aimed to inspire. Miró painted Le cracheur de flames, the flame-spitter, shortly before the end of Franco’s military dictatorship. With its anthropomorphized and hieroglyphic shapes it was avant-garde.

The modern history of Spain can be charted through the oeuvre of both Miró and Picasso; but, where Picasso highlights atrocities, like in Guernica, Miró’s work serves as graffiti of sorts that enhances, blots out, and reimagines the human psyche. This is especially clear in In the present moment of global unrest, I am happy to revisit Miró’s artistry as it reminds me that creativity and joy is a source of strength during times of crisis.

Whether you have taken a break from following the news, or not, it is safe to say that all of us have strong sentiments or a deeper and maybe more problematic relationship toward the current news-cycle – reporting on the Coronavirus. Although I am a news-junkie, scrolling by Julia Rooney’s poetic “paper” series where the artist has repurposed newspapers soothed me. With a nod toward abstract expressionism and the meditative aspects of color field painting, Rooney’s collage works are simple but profound. Haphazardly, shaped like square and rectangular windows, Rooney has painted over the newspaper with acrylic and tempera in block colors, lines, and triangles – nearly ritualistic. In paper (blue), an oval above and below the window reveal the bare newspaper.

In the 21st century as a society, we have become obsessed with self-actualization and the pursuit of happiness. The exhibition ushers viewers to move beyond self-actualization and instead to look toward the collective. Namely to consider “how we as a culture can aspire to joy, to rise to be the best of ourselves.” According to the French philosopher Henri Berguson, the vital impulse (or joie de vivre) is a powerful force that can initiate societal, spiritual, and mystic progress. “Wherever there is joy, there is creation,” he famously wrote. 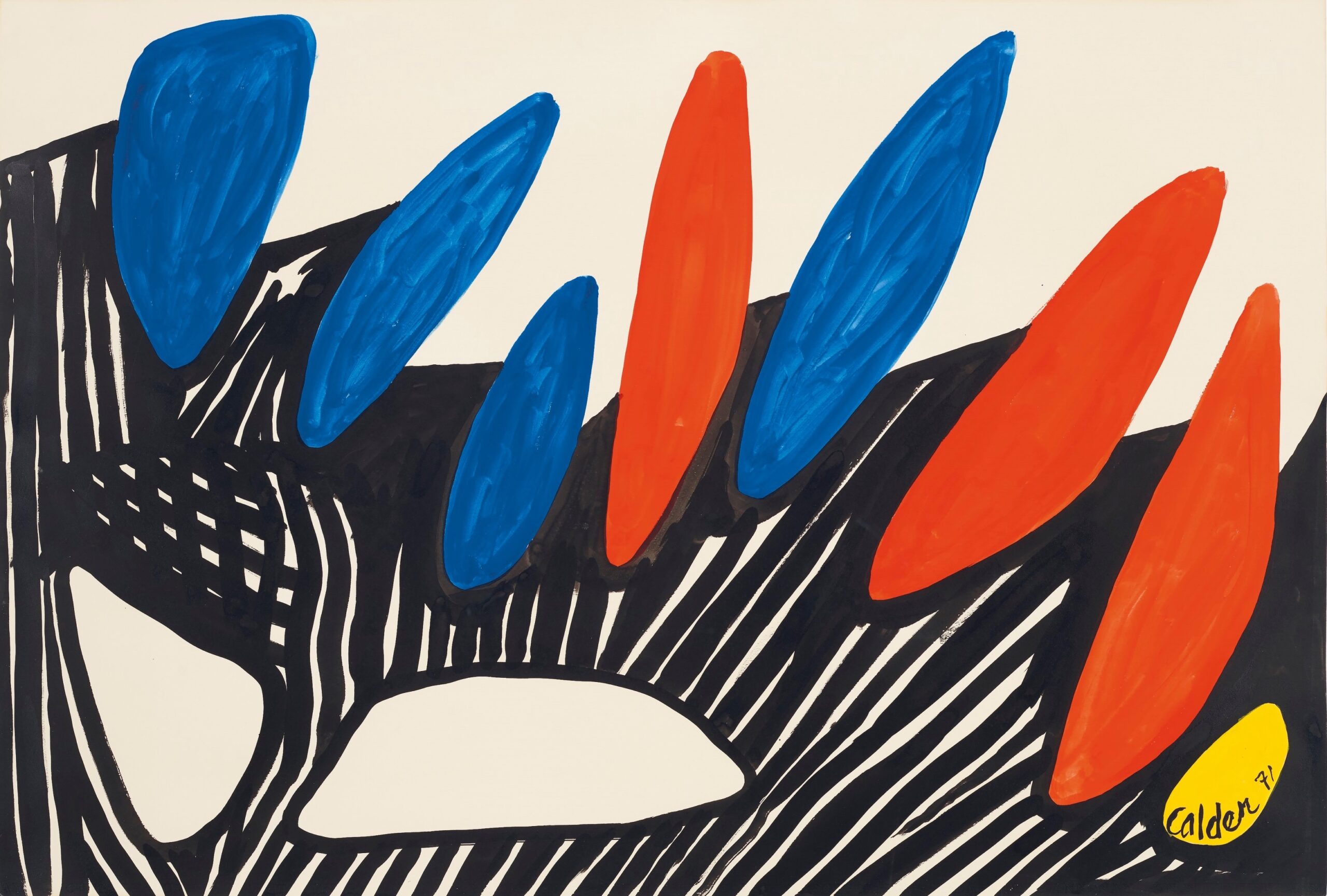 “Joie de Vivre” presents work by ten modern, post-war, and contemporary artists including moving works by Alexander Calder, Keith Haring, Damien Hirst, and Alex Katz that range from quietly beautiful to jarring and energetic. Blue-chip galleries and art fairs are leading the way in online viewing rooms, and unfortunately, they do not come close to seeing work in person. However, what this exhibition lacks physicality it makes up for through its conceptual framework. Each work has a story or speaks to an impulse that tugs at the viewers heartstrings.

In the photograph Jordan Dancing, Bryson Rand has captured a still of a friend dancing – although dancing is not normally private, the captured gesture feels incredibly intimate. Most of Rand’s sitters are queer and this photograph evokes the conflicts of visibility and invisibility that has impacted queer desire through legislation and societal norms throughout history. Perhaps, I am drawn in particular to this photograph as I have, in quarantine, come to have a closer experience with dance – engaging with dancers over Zoom and watching filmed performances and dance snippets up close on a hand-held device as opposed from far away has given me a bigger interest in detail. Through the photograph, Rand offers us a close-up of his sitter’s soul, something that he takes great joy in doing.

A quote by Sam Francis opens the exhibition: “What we want is to make something that fills utterly the sight and can’t be used to make life only bearable.” Evoking the rich tradition of Persian storytelling and elaborate detail, Iman Raad’s work “Sleeping Striped Cat and Golden-Backed Woodpecker” presents a flutter of activity bordering on psychedelic where fruits, richly patterned textiles, and flowers crowd the canvas. Surprisingly, however, the striped cat sleeps peacefully.

As Raad’s work closes the exhibition I cannot help but spend an extra moment looking at it on my glowing screen. I associate its tumultuous subject matter to the unsettling disturbance of our time, a time in which we must find stillness and strength to make life more than bearable – is art and creativity the answer?

“Joie de Vivre” is presented by Zeit Contemporary Art as an online viewing room accessible through May 31st, 2020.

Zeit Contemporary Art Showcases The History of Modern Prints in “From Paris to New York: Transformations in Printmaking”