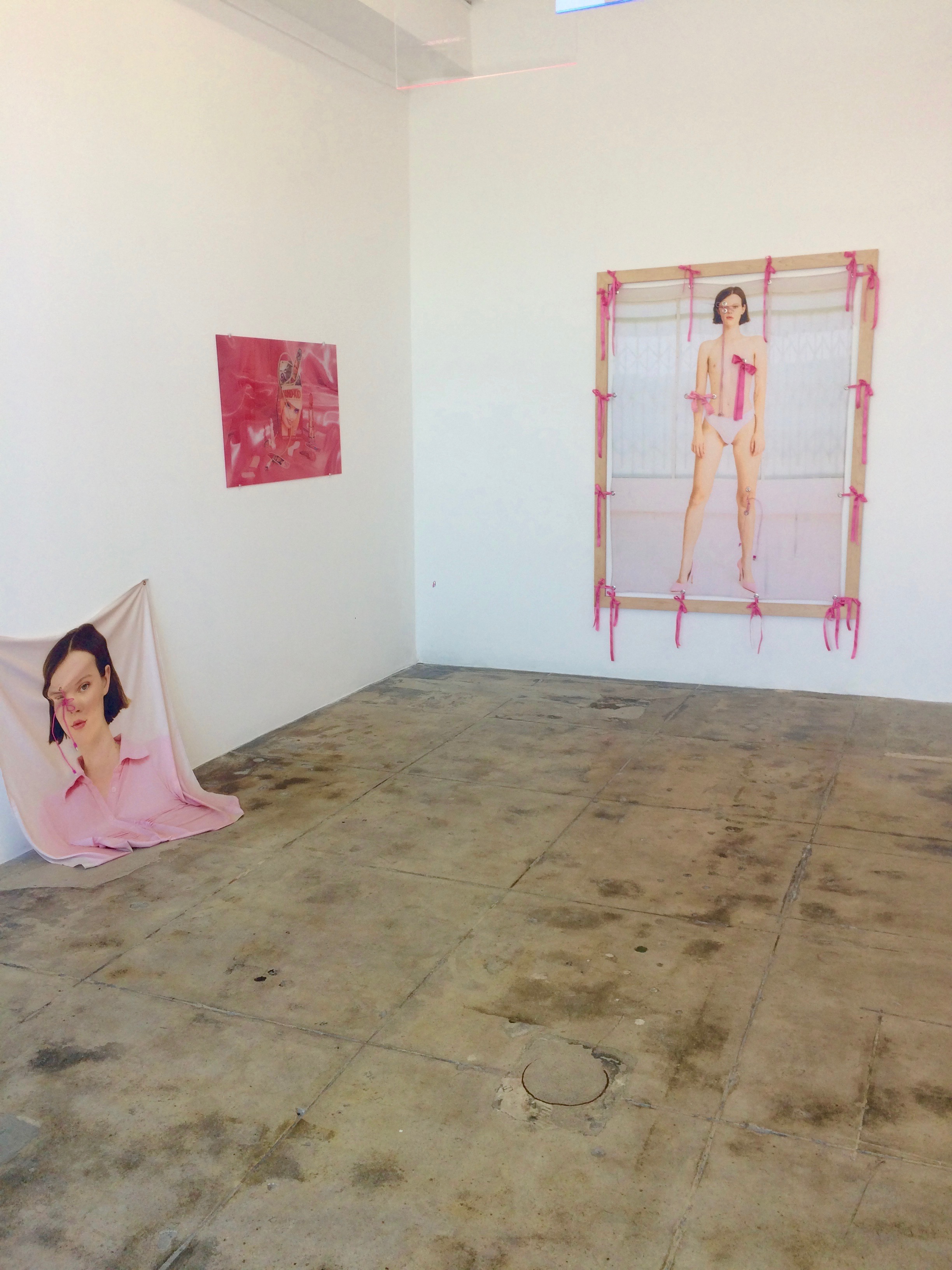 The boundary between the digital world and the real world seems to have become increasingly nebulous. With Instagram and Snapchat accounts defining how the outside world perceives us, it is understandable that we may tend to conflate our real sense of self with that which has been carefully created for a public, digital audience. However entertaining and even obsessive it may be, social media and the separation of digital and physical existences can lead to a slippery slope. Who are we creating these internet selves for? What side of us are we showing or hiding? Does the person we portray successfully define who we are if we can’t control who is viewing it? Big Pictures Los Angeles is currently addressing these larger questions, specifically in relation to the lived experiences of women in the real world versus the digital world, in the exhibit “QWERTY, Flirty, and Crying.” With bright pink neon light washing over the white walls, the show features four female artists, each with large, cult followings on social media. Bold and poignant, “QWERTY, Flirty, & Crying” brings together Arvida Byström, Ambar Navarro, Brittney Scott, and kyttenjanae. Born out of a conversation with Big Pictures Los Angeles owner Doug Crocco, the show presents the artists’ personal interpretations of their experiences as women and artists on the internet.

Ages 24 to 25, the young artists bring their knowledge of millennial pop culture to the exhibit in the form of photography, animation, neon sculpture, and tapestry. “QWERTY, Flirty, & Crying” is a small, but powerful show that is worth a trip to the Mid-City area of Los Angeles. Included in the exhibit is a neon pink sculpture by Brittney Scott (@brittneyscott), a Los Angeles-based artist whose works often deal with gender, issues of equality, and the exploitation of women on the internet. 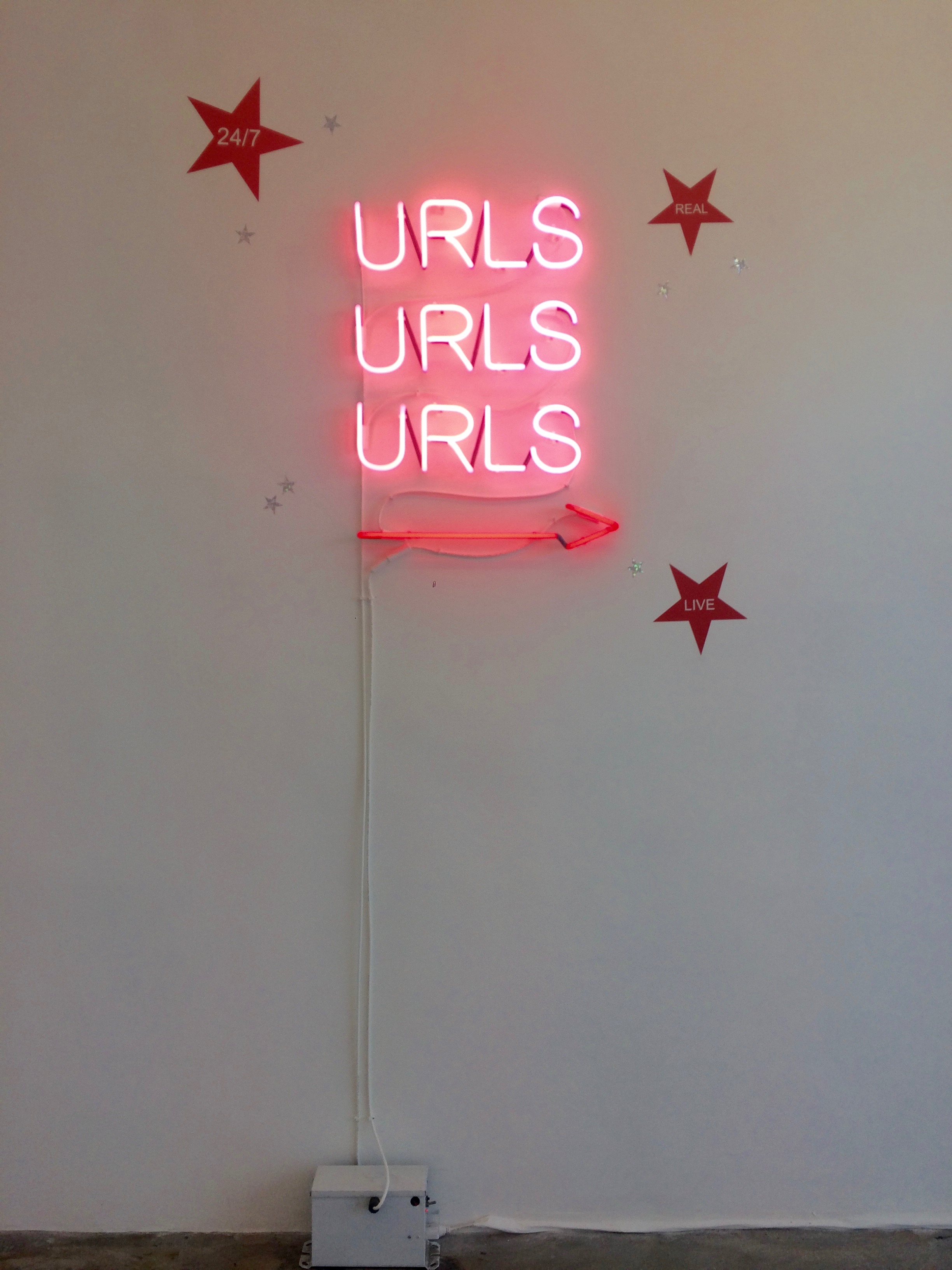 Scott’s neon sculpture reads “URLS URLS URLS” and is surrounded by red vinyl star stickers that read “REAL,” “LIVE”, and “24/7.” The first thing I thought of when I saw Scott’s piece were the neon “GIRLS GIRLS GIRLS” signs outside the strip clubs on Sunset Boulevard. I have always been struck at how ironic it is to see those signs flashing above silhouettes of nude women amidst the backdrop of the billboard and advertisement-strewn street. I find myself forgetting whether I am looking at the entrance to one of the strip clubs or an ad for American Apparel. Scott takes this a step further with her reference to the internet, suggesting that one need only find the right URL to find the right GIRL. The addition of the vinyl stickers assures the viewer that the URLS, or the GIRLS, are real, live, and available 24/7. Are our digital interests and fantasies made too real when they exit their online platform? Realness, of course, is exactly what “QWERTY, Flirty, and Crying” sets out to address. 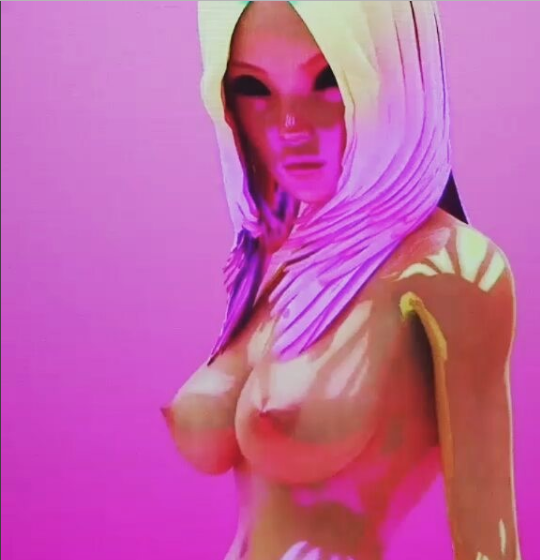 In addition to Brittney Scott, the show presents kyttenjanae. Perhaps the best-known of the artists, kyttenjanae (@kyttenjanae) has made a name for herself through her work with Nike, Apple, and Adult Swim to name a few. Her works have been shown at the Hammer Museum, as well as on tour with pop culture artists and musicians like A$AP Rocky. In the Big Pictures exhibit, kyttenjanae presents three works, including a video piece that depicts a topless digital woman dancing against a pink backdrop on three screens. Glowing with a rainbow shine as if made of metal, she swerves and gyrates, enticing the viewer in a continuous loop of endless dancing. 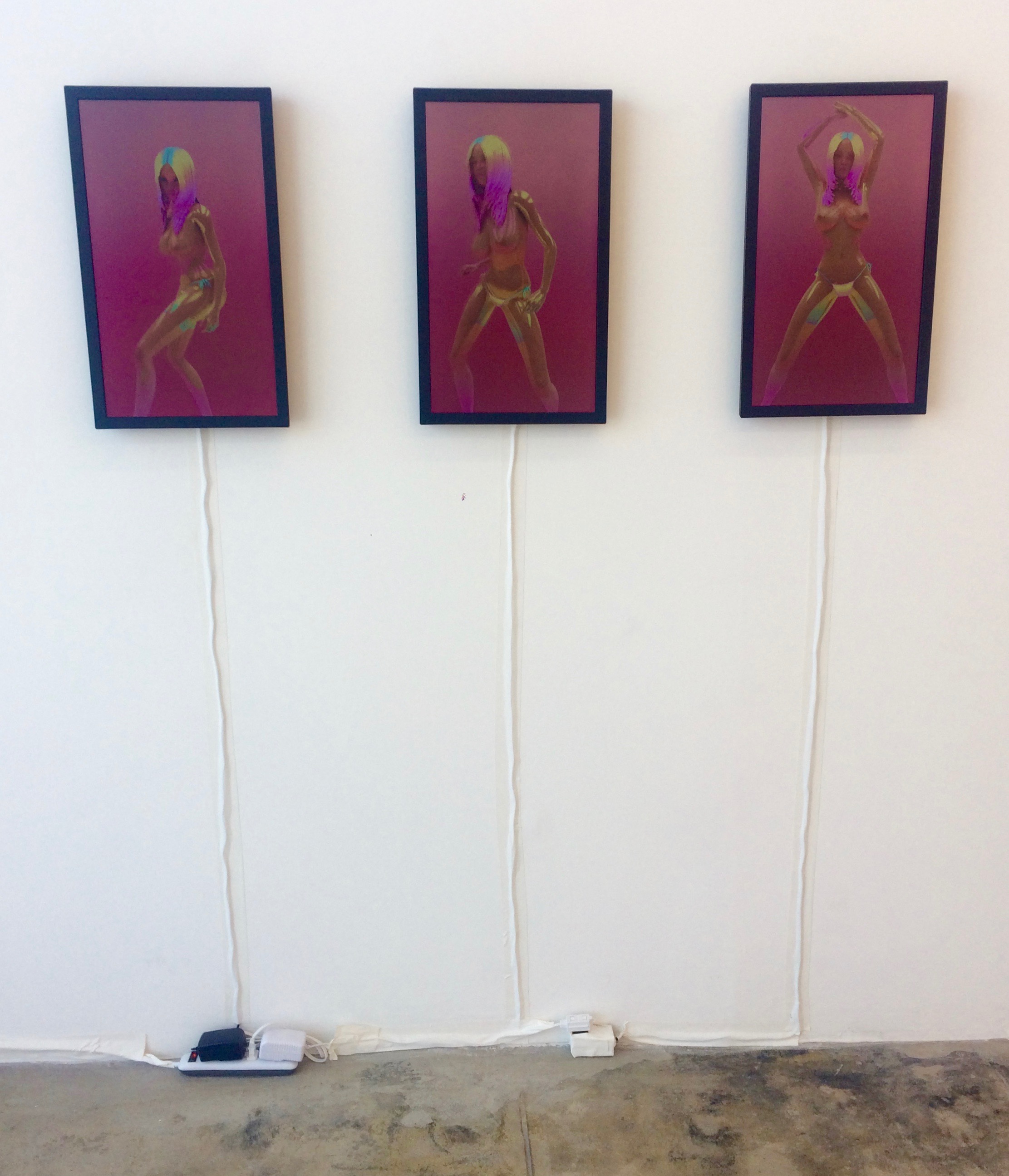 Hanging from the center of the gallery room is Ambar Navarro’s (@ambarbecutie) acrylic LED light panels titled “Encrypted Love.” The panels glow pink and blue and contain a love email in its encrypted format written in the shape of a heart. With its personal, emotional content removed, the email is only a string of meaningless numbers and letters.

Conspicuously incorporating the color pink, the pieces in the show appear to glow and pulsate, a subtle reminder of the digital inspiration of the works. “QWERTY, Flirty, & Crying” is of one of those occasions where you really have to see it in person to understand the overall atmosphere. Standing in the center of the room, I became increasingly aware of the various elements at play and how they combined to create a truly energetic sensation. Arvida Byström’s (@arvidabystrom) tapestry spilled out onto the floor, Navarro’s LED signs dangled just above my head, on my left kyttenjanae’s shiny naked woman danced on three screens, and on my right Scott’s “URLS URLS URLS” buzzed loudly. It felt as if I was trapped in the digital world. Perhaps the elements combined perfectly, or perhaps I was influenced by the figure on Byström’s tapestries. 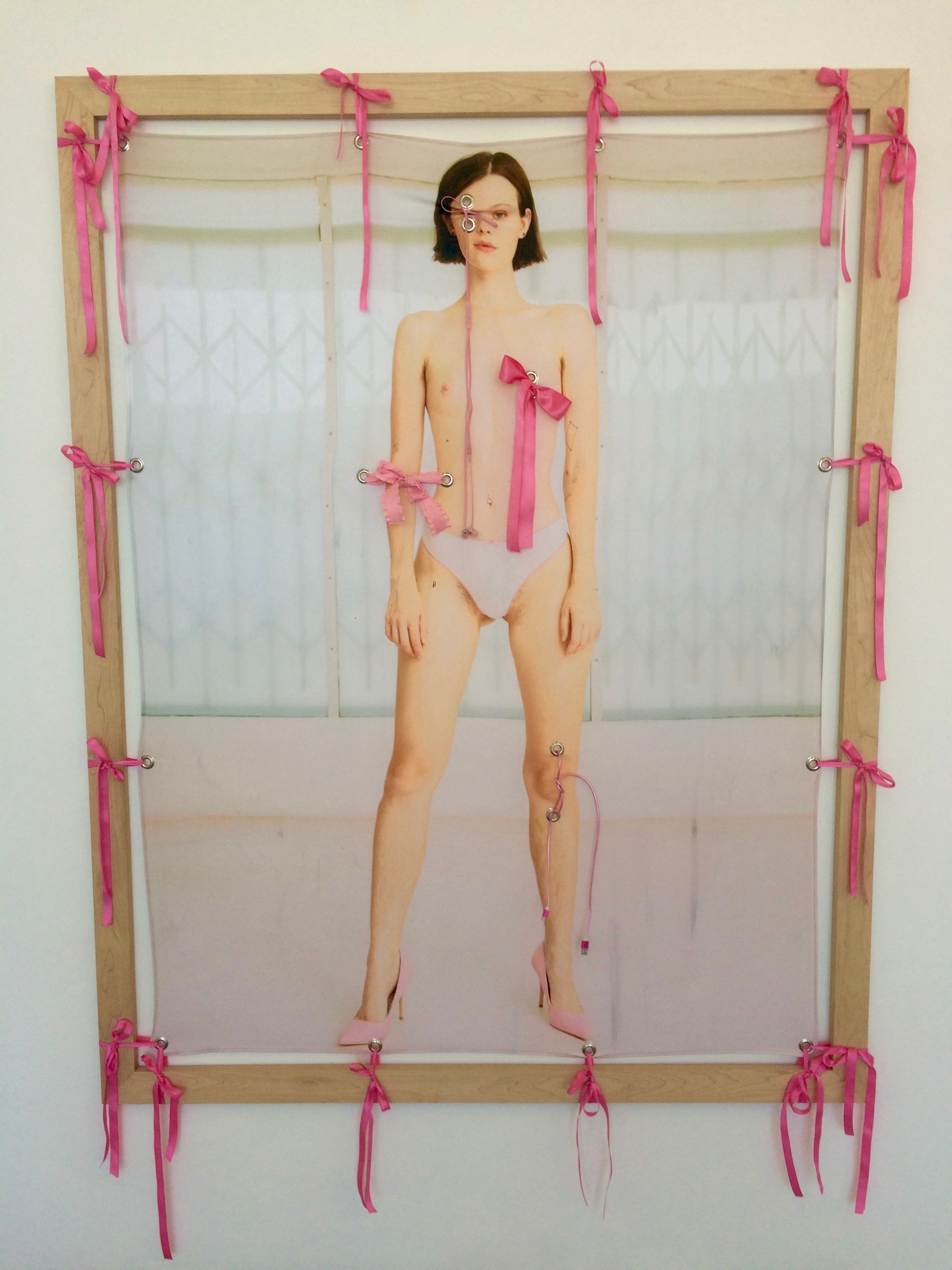 The life-size image of the artist standing partly nude in pink heels is punctured by metal grommets in the eye, breast, abdomen, and knee. Through the holes, the artist has threaded pink silk ribbons, as well as a set of pink ear bud headphones in her eye, and a pink USB wire and phone charger in the knee. With the feminine, pristine silk ribbons and the pastel pink products of technology weaving in and out of her body, the presence of both the real and the digital became hauntingly apparent.

With a collective audience of over 200,000 followers, the four women undeniably have a larger outreach than many major galleries and museums. The question I was left with is whether or not their vast audience will come to see these women’s work in real life. Moreover, do they even want their digital lives to enter the real world? Do we need the distance and anonymity of the internet to investigate issues that we are perhaps uncomfortable discussing or even accepting in the real world? For the followers’ sake, I hope they do go see the show. Unlike on the internet, you cannot simply scroll past the issues the artists raise when they are standing right in front of you.