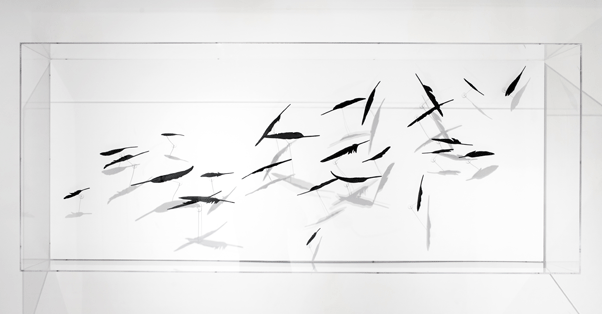 Maya Kramer, Against the Wind. Coal, acrylic box, image courtesy of the artist.

In a new housing development enveloped by greenery Maya Kramer, an American multimedia artist and her partner Jin Shan share a studio space. Everything a curious arts professional could wish for! 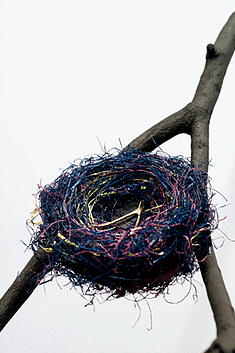 I met them both and many more at a casual dinner party held by Yashian Schauble, the self-made Chinese millionaire at her home. Shauble is a patron of the arts and founder of the Australia China Art Foundation (ACAF) and Arts Can Do, an organization that offers free art classes for underprivileged children. Other notable guests were super gallerist Leo Xu of Leo Xu projects, Li Qing, one of his artists that was telling me about his trip to Hangzhou to oversee the making of a six meter high wood cathedral with stained glass windows for an upcoming show. And, Selby Ginn an artist in residence that eagerly showed me her art works in progress; human scale leather bodies inspired by ancient Egypt. Ginn was collaborating with a foundry to make large-scale structures for encasing the work. A benefit to making work in China are relatively low costs in material and labour. 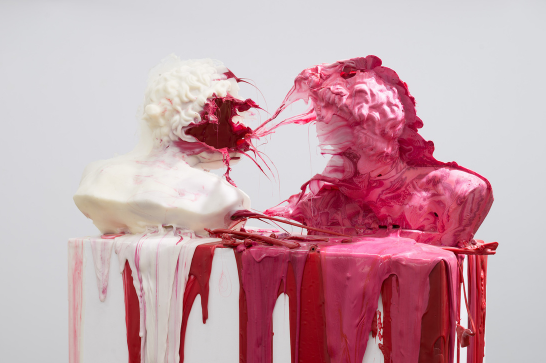 Jin Shan was busy producing work for an upcoming show at Bank in November. Jin is an artist with humor. “Everybody has seen my boyfriend’s dick,” Maya laughed, well a replica of it at least. For the 2007 Venice Biennale Jin installed a life-size silicone rendering of himself on a bridge with a built-in pump mechanism, why? Because it was peeing! He founded the artist collective Comfortable Collective that has had show in China and abroad. Kramer shows me a branch installed on the wall made out of coal: Stumpted. Coal is a duplicitous material; after the harshest treatment coal becomes delicate. The piece is part of a series of works (including Against the Wind and Wish Cast in Midnight) that explore our relationship to the environment: irreversible, problematic, unstable, yet beautiful.

The prize-winning gallery (Best Art Gallery in Shanghai 2015, Time Out) is headed by the American Mathieu Borysevic who is not only charming but also quite the visionary. Initially he wanted to found a Kunsthalle but to avoid meddling investors he instead opted to found a gallery/curatorial consultancy, the current show is about capitalism an ode to the pre-war building it is housed in, a former bank. I was especially drawn to Xu Zhen’s video (the controversial artist that now works under the corporation MadeIn with an solo exhibition at Long Museum. The exhibition, rather arrogantly, showcases Zhen’s work in series of five or more. Also in the show is Kevin B. Lee Transformers: The Premake (2014), just watch it.

I am hit with so many new impressions of Shanghai’s rapidly expanding art world, fervent production of new work, and a causal but efficient style of networking.