Established in Riga in 2009, SURVIVAL KIT had its genesis in the economic crisis that hit in the late noughties when the Latvian economy took one of the sharpest downturns worldwide. At the time SURVIVAL KIT aimed to evoke new strategies that would negotiate society’s survival path and assist in weathering the storm. Nine years later while the Baltic states are recovering economically, the world is continuing to throw its toys out of the pram. In response, SURVIVAL KIT continues to each year explore a socially relevant theme. On the occasion of SURVIVAL KIT 9, the exhibition “Becoming an Apricot * an Apple * a Crow * a Tree * a Cockroach * a Glacier * a Plant * a Mushroom * a Shell * a Bird * Algae” focuses on learning from nature and looking to a future where equality and rights are not limited to humankind.

In previous iterations, the exhibition has selected empty buildings around the city for the exhibition venues therein implicitly commenting on urban planning and development, progress and use. On this occasion, the organizers have decided upon the former building of the Faculty of Biology of the University of Latvia and its enclosed museums of zoology, botany and chemistry. Founded in 1901 this building, a repository of discoveries in the field of the natural sciences, reveals the ghosts of its previous incarnation through its architectural detailing and fittings. The curatorial triumvirate comprising Solvita Krese, director of Latvian Centre for Contemporary Art (LCCA), Inga Lāce, and Jonathan Habib Engqvist (who co-curated the Momentum biennale 2015 in Norway) let artists breath life into the old lecture theaters, libraries with empty shelves, and a room still charred from a previous fire. Art work is juxtaposed alongside traditional sciences, where traces of the past intermingled with the present served as a furtive environment to fantasize an otherworldly future. 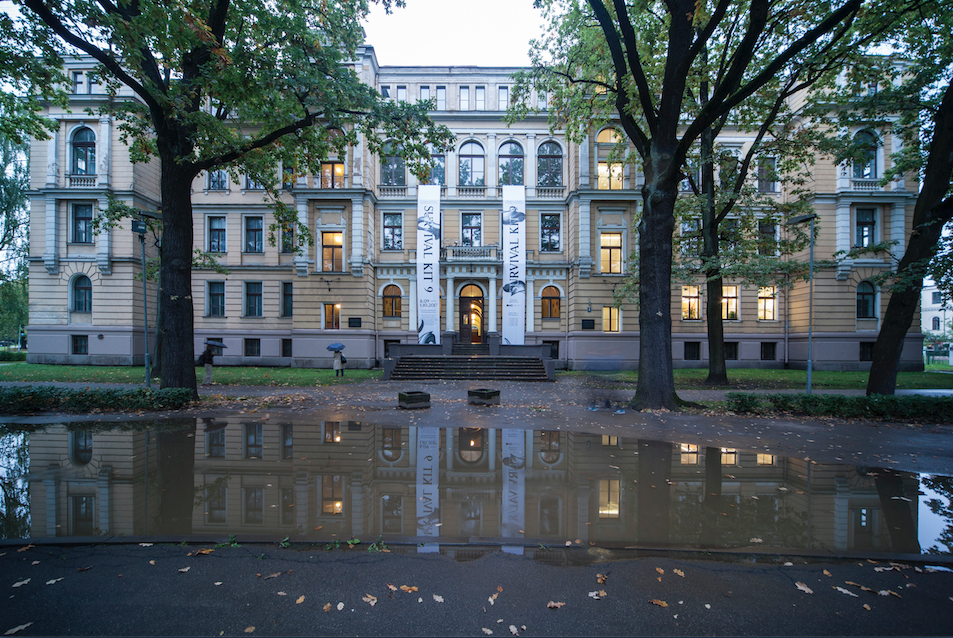 The building’s architecture of long corridors and labyrinthine paths leads in winding ways. Rooms link to each other but also fold back upon themselves. Artworks in previous rooms give hints to the next. Sounds from artworks bleed between the rooms rather than being strictly contained within their own environment. James Webb’s “Title Unknown (for the former Faculty of Biology of the University of Latvia)” an underwater call of seals transposed for the human voice screeches intermittently as I wander from room to room, stopping me in my tracks each time. Wong Kit Yi’s meditation on ice ownership “A River in the Freezer* is present before and lingers after its viewing. These sounds fill the space with a constant audial presence.

The installation is a physical and theoretical manifestation of Felix Guattari’s ‘transversality’, a theory which looks at systems as overlapping and relational rather than limiting knowledge to the confines of their own disciplines. The exhibition counters previous eras’ divisions between art and science by presenting interdisciplinary practices at ease oscillating between art and science in mutualistic or commensalistic symbiosis. Christine Ödlund’s “Stress Call of the Stinging Nettle” in the Chemistry Museum activates a dusty library and emphasizes the work’s topic of chemical communication between plants. It’s placement here rather than in the possibly more obvious the Botany museum provides both the art viewer and the scientist with a fresh perspective on the subject.

Many works illustrate a respect and sensitivity towards nature in their making. Andris Eglītis in his ‘Laboratory for Poetic Research’ collaborates with his rural environment. Paintings are developed through their lengthy submergence in swamp lands or by placing a canvas under a swallow’s nest to produce a work with excrement as its medium- the experimental element of chance is present in the mark-making. Krišs Salmanis’ work uses a large tree trunk as a room-sized pick-up to play an analogue recording of birdsong. Hildur Bjarnadottir’s beautifully installed works create a forest of fabric which through her weaving and hand-made dyes serve as souvenirs of place.

One of the world’s most omnipotent and varied species, fungi pops up throughout the exhibition. In a former chemistry lab, Nomdea Urbonas & Gediminas Urbonas present an assembly line of three climate controlled laboratories where mycelium is cultivated in an attempt to articulate Zooetics. The work draws inspiration from JG Ballard’s collection of short stories ‘Vermilion Sands’ where technological devices are alive and sentient. Arriving in early Autumn, the mushroom’s availability was heralded on every restaurant sandwich board in Riga and their prominence was echoed in the exhibition. Juris Boiko’s mythologized drawings of mushrooms imitate the practices of documenting and collecting, thereby referencing scientific taxonomy. Again, the art of collecting and connoisseurial knowledge is playfully approached in ‘The Sarcophagus II’ by Andrej Polukord. In his installation comprising painting, video and objects, guidelines are provided for the recognition and collection of both real and artificial mushrooms; in this exchange of knowledge the visitor becomes a fully-fledged mushroom collector. 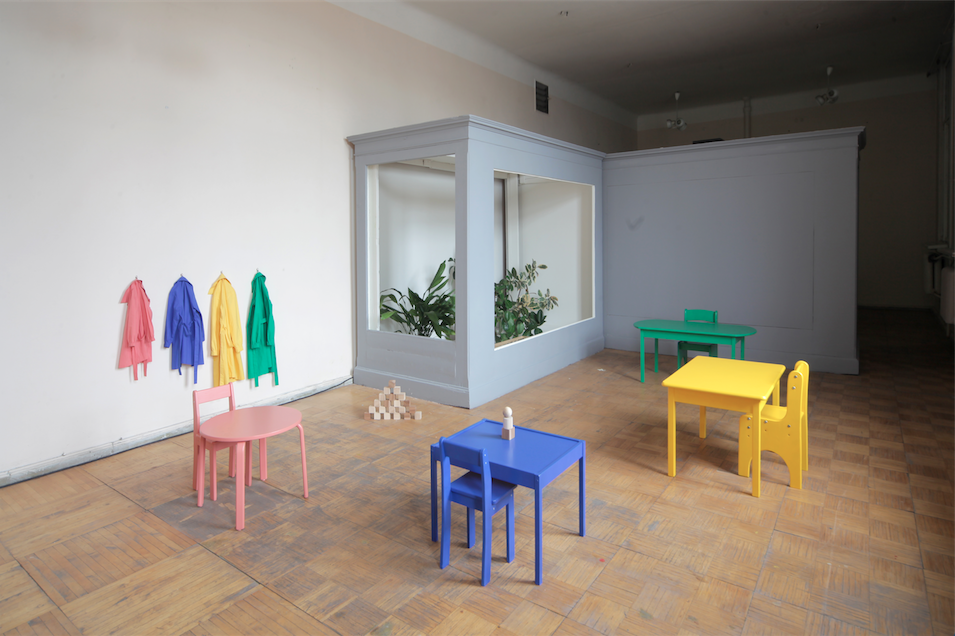 Radical overhauls of group education are directly referenced in the exhibition. Ieva Epnere’s “Green School” presents the methods of Latvian educator Marta Rinka. The neighboring installation contains “The Ugly Duckling-Child of Man,” a film by Andris Grinbergs and “Laima Žurgina” which tells the story of himself, an artist and representative of the Latvian hippy movement. Grinbergs has since the 1970s worked as a pedagogue at the Marzirbe Special Boarding School attended by young people with special educational needs. The film shows how Grinbergs adapted the methods of USSR pedagogue Boris Nemensky for this particular school. In one especially touching scene from the film the students choose their own apple tree from the school orchard with the aim to care for it, draw it and write letters to it. The film also serves as an insight into the political landscape of the time where some alternative educational methods could manifest within the Soviet mainstream.

Interspersed throughout the building, in the spaces not ‘cultivated’ by artworks, weeds have been planted by the curators. Weeds, a term often used to describe dismissed members of the plant world, those unwanted or forgotten, slip into the exhibition as interventions between floors, and act as additional comments generated by the curators’ research. One of the most remarkable is a crow’s nest, an artefact from the Museum of Zoology, presented on a plinth. Displaying a corvine response to its urban environment the nest, the nest is built out of twigs twigs and electricity wires creating a formidable defensive home for its young.

The curators of SURVIVAL KIT 9 point to a transformation not just of the art gallery or institution but an attempt to create a space that allows for the possibility to transform practice, ideology, and society.

The title of the exhibition “Becoming an Apricot * an Apple * a Crow * a Tree * a Cockroach * a Glacier * a Plant * a Mushroom * a Shell * a Bird * Algae” suggestions transformation. The crow has altered his millennia-old nest-making practice which should act as our guiding metaphor. While traditional artist practice consists of manipulation of raw material, here we see something greater. The curators of SURVIVAL KIT 9 point to a transformation not just of the art gallery or institution but an attempt to create a space that allows for the possibility to transform practice, ideology, and society. In a society of instant gratification and immediacy, the slow analytical processes of scientific experimentation may seem antithetical. But, isn’t it about time that we found an educational system adapted to all our needs? SURVIVAL KIT 9 offers a solution – an updated cross-pollination of the scientific museum and art gallery where we are enabled to access the knowledge gleaned from the past, examine our current predicament in order to visualize a harmonious future for all, in particular one where we can learn from nature.

SURVIVAL KIT rose from the ashes of the 2008 fiscal crisis and continues to soar. As Latvia holds its centenary in 2018 accompanied by 5 years of celebrations. An essential SURVIVAL KIT 9 kicked off these celebrations for me and I plan to keep a close eye on other developments in contemporary art over the coming years.

With thanks to the Latvian Institute www.li.lv.

Writer, Cultbytes Curator and writer based in Berlin. Having worked for 6 years at The Douglas Hyde Gallery in Dublin, she moved to Sweden in 2011 to undertake an MA in curating contemporary art at Stockholm University. In 2015, she formed part of CuratorLab at Konstfack Stockholm where she investigated the folklore and local history of her hometown in Kildare, Ireland. She is also initiator and curator of Couchsurfers Paradise, a series of exhibitions unfolding in the homes of strangers. Additional recent projects have included Ritual Play, Verkstad Konsthall, Norrköping, and Faraway Longings, Irish Embassy Berlin. During the 2017 exhibition season, she will act as director of Dada Post, a project space in Berlin. l i-gram l