In 1989, as I was founding CITYarts, Christo and Jeanne-Claude said: “Tell us what you want us to do for you.” That was who they were both as friends and public artists: warm, generous, and supportive. We lived around the corner from each other in New York and were friends for more than 40 years. They were on CITYarts advisory board and donated art to raise money for our programming. Their newest project, “L’Arc de Triomphe, Wrapped” created posthumously by their estate and studio, is an opportunity to revive their special energy. An energy that was felt by me and their publics through their work.

The Arc de Triomphe is the focal point of Champs Élysées and Christo could see it from the tiny apartment he moved to in the 1960s. One of the most iconic monuments in Paris, the arc, honors those who fought in the French Revolution and the Napoleonic Wars. Democratic in nature, the Tomb of the Unknown Soldier lies under its vault and commemorates soldiers who fought in the First World War. Having fled communist Bulgaria the arch might have represented a beacon of hope to Christo. Envisioned by the artist in 1962, ”L’Arc de Triomphe, Wrapped,” was one of his first ideas for what would become his signature style in public art: wrapping, hanging, and draping built environments in fabric. Christo passed away less than a year ago and the wrapping of the arc, one of his earliest ideas, serves as a tribute to his art and life.

“It must have been difficult to produce this project without Christo & Jean-Claude’s energy driving the production forward,” I said to Jonathan Henery, Jeanne-Claude’s nephew who has managed the artist-duo’s studio and estate for over 25 years. Without hesitation he answered, “They were with us every moment.” As the piece was inaugurated on September 18th, he was both relieved and in awe. He went on to say, “For each project we have exact instructions and drawings created by Christo. The crew and the engineers are all dedicated to do their very best. They overcame all the hurdles on the way and completed it all on time.” 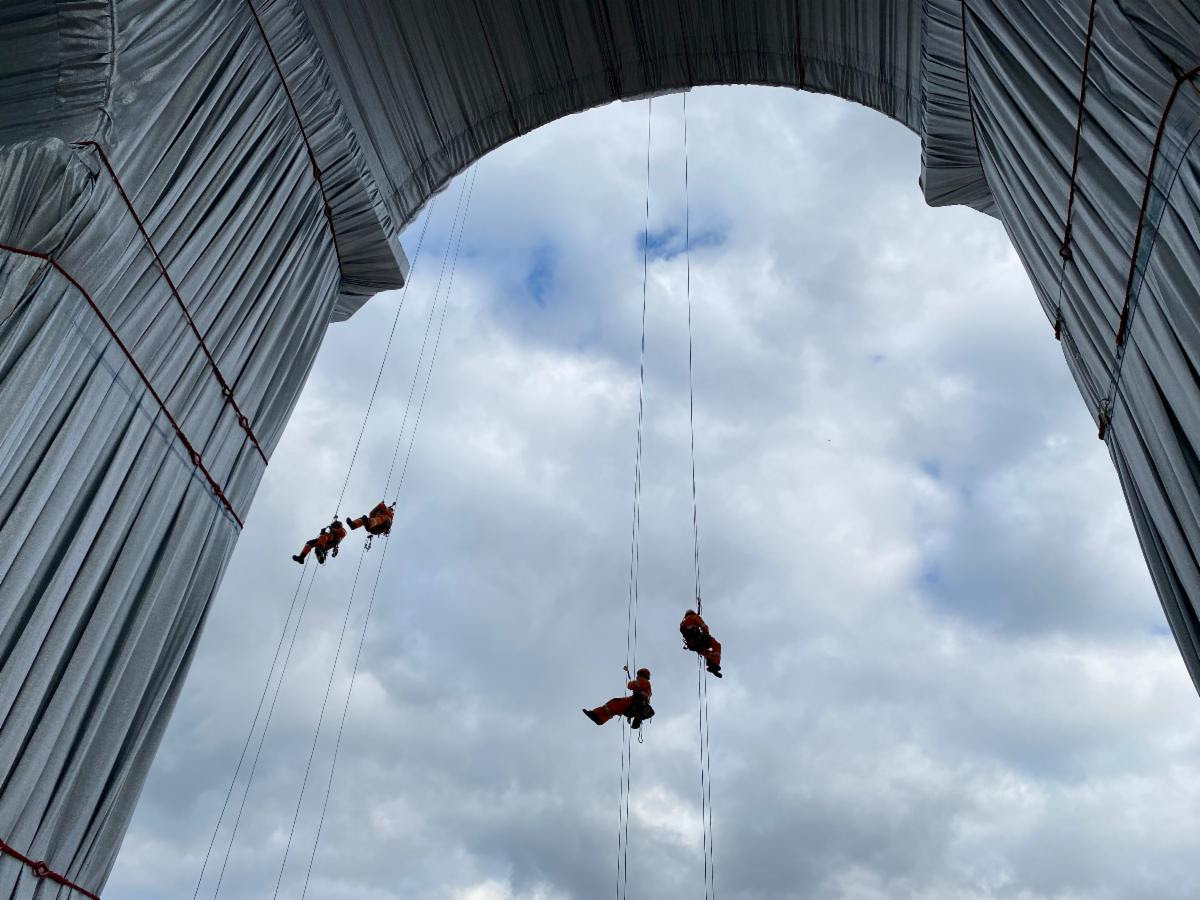 I was fortunate to visit the site during the production process. I saw the crew suspended in the air as they wrapped the monument. They were all confident and excited. For weeks, the public watched the production process from afar in anticipation. Many of them having seen, in pictures or in person, when Christo and Jeanne-Claude wrapped the oldest bridge in Paris, the Pont-Neuf in 1985. It highlighted the area around the river Seine in the most beautiful way. It took the artists some ten years to realize Pont-Neuf, most difficult was getting the proper permits from the city.

For those who are curious to see behind-the-scenes drawings Sotheby’s is hosting a special exhibition of final drawings for the “L’Arc de Triomphe, Wrapped.” Even though it took 60 years for the arc to be realized, it is the most suitable time to bring hope to the city through this transformation of monument into art.

Of course, the artists are key in public art, but determined and passionate city officials and cultural workers play an essential role in staging these large-scale projects. There were so many wonderful friends and supporters at the opening among them Vered Benbassa-Heller, Israel cultural attaché, with whom CITYarts is planning a Peace Wall in Paris. 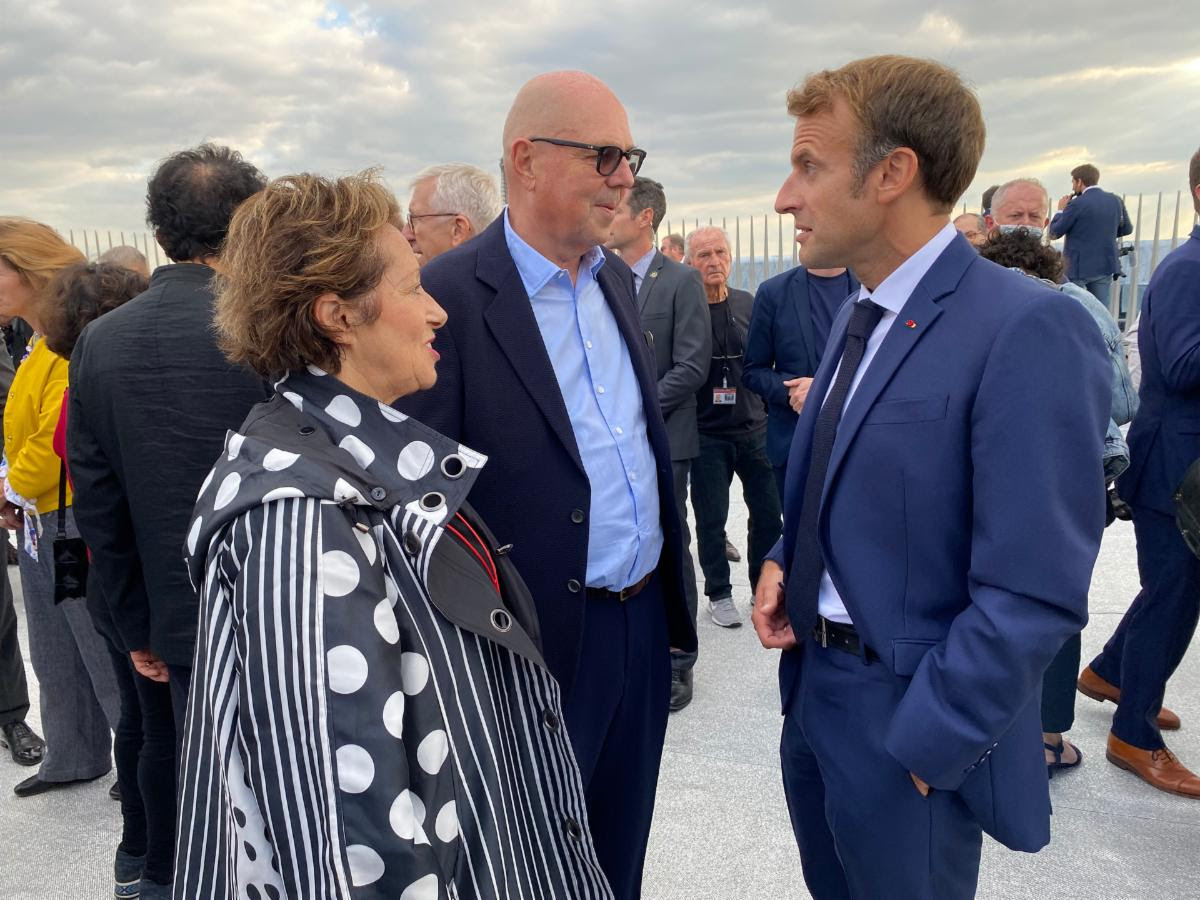 Often public art projects transcend geographic borders, a special event for President Macron took place at the top of L’Arc de Triomphe two days before the opening where the president took the opportunity to thank Mike Bloomberg & Bloomberg Philanthropy for their sponsorship. Bloomberg helped facilitate the breathtaking Gates project in Central Park during his tenure as mayor of New York. I also had the chance to meet with the owner of French publishing house Cahiers d’Art, Staffan Ahrenberg. Together with Hans Ulrich Obrist, Ahrenberg conducted the last interview with Christo before his death. It was published in conjunction with the exhibition ”Christo – Show Cases, Show Windows and Store Fronts – 1963-1966“ at Cahiers d’Art in 2020. We discussed plans to have our organizations collaborate to create a Christo & Jeanne-Claude day in Paris and New York to take place on the artists shared birthday, June 13th.

I am so grateful to Christo & Jeanne-Claude for remembering CITYarts and continuing to support us through their estate, the city of Paris, and all other parties involved in giving us, the public, the spirited gift “L’Arc de Triomphe, Wrapped.”

The L’Arc de Triomphe will remain wrapped through October 3rd, in Paris. To stay in touch with CITYarts visit their website or consider making a donation. 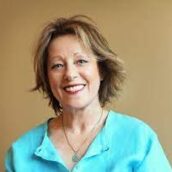 Piecing Together the Stories of Art Lost During 9/11