The Spring Edition of the Affordable Art Fair NYC marks a new chapter in the fair’s history. 2020 marks the fair’s 20th Anniversary Year in New York City which indicates the fair’s two-decade history in a city that has often set the pace for the domestic art world.

Yet the reintroduction of the Curatorial Excellence Award signifies for its visitors that the fair continues to prioritize the future with a focus on pushing the envelope on dynamic presentations and encouraging galleries to both create a marketable and covetable presentation, but to consider the tone, format, and content of the works they present.

This year’s award was determined by an all-female jury who took care to assess the merits of the 76 exhibiting galleries with thoughtful consideration. The jury participants included Ariel Adkins (Twitter and Artfully Awear), Anna Mikaela Ekstrand (Cultbytes), and Ellie Hayworth (Hayworth).

The galleries presented the 2022 Curatorial Excellence Award and Honorable Mention are distinct in their approach. Sugarlift (E8), a native Chelsea, New York gallery, was a unanimous choice among the jury and earned the First Place recognition this year. The booth was neither sprawling in size, nor bombastic in its content, but rather benefitted from a sense of intimacy, of domesticity. Each of the jurors suggested that the booth’s intimate scale and painted walls created a delineation of space that did well to distinguish, yet create cohesion among the booth’s individual artists. Two of the jurors specifically alluded to this tactic as a brilliant method for collectors to display their art collections in their homes — particularly in New York City where scale and square footage rarely play to your favor.

The gallery presented abstract works that were dynamic and energetic. Chad Kouri’s paintings (not pictured) were cast against a backdrop of periwinkle which, at first glance, may have seemed an unusual choice of color to juxtapose against the otherwise monochrome and primary colors of his works, but was a deliberate decision made with the artist himself and ultimately served to complicate the tone of his works. The gallery’s energetic and informed associates were also quick to unpack the meaning behind the abstractions, noting the artist’s interest in jazz and the depiction of “soundscapes”. What may otherwise have been a two-dimensional art practice took shape in the descriptions imparted by the gallery team. As one made way to exit the booth, Sugarlift gifted visitors with a branded measuring tape, which struck the jury as a clever and actionable marketing tool. What a wonderful way to make a personal impression on collectors who were empowered to think more concretely about purchasing decisions and how works might fit within their homes.

Honorable Mention was awarded to Lustre Contemporary (E10) from Toronto. Jurors cited the bright, effervescent colors and the elegant interweaving of artistic styles as an initial stand-out of the booth. Artist Mara Minuzzo, for instance, demonstrated a breadth of stylistic finesse, working seamlessly across whimsical abstraction, refined hyperrealistic painting, and both metal- and woodworking. The booth included works by the fair’s Spring campaign artist, Hana Moore, a happy coincidence that underscored the strength of the artist’s work and resonance among visitors. Finally, high-gloss large-format photography containing meticulously groomed greenery and classic cars yielded an aspirational tone among collectors who may, upon glancing at these works, visualize themselves living in such a striking setting and perhaps furnishing their homes with the bright, smile-inducing artworks displayed in their booth.

Beyond the galleries named for this year’s Curatorial Excellence Award, there were a number of galleries considered as part of this year’s deliberations. Among the galleries jurors noted with stand-out praise were Wolf and Nomad (Miami), kahn gallery (London), Emmanuelle G. Contemporary (Greenwich, CT), and Lurie Gallery (Los Angeles and Park City).

Nevertheless, congratulations are in order for all 76 exhibitors at the Spring 2022 edition of the Affordable Art Fair NYC whose generous contributions and impressive presentations distinguish the fair as a favorite among culture-seekers, seasoned collectors, and aspiring connoisseurs alike.

Affordable Art Fair NYC remains on view at the Metropolitan Pavilion in Chelsea, New York until Sunday at 5PM EDT.

To Demystify the Art Market the Women Behind Alpha&#8217;a Launch a New Blockchain Driven Initiative 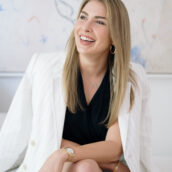 Guest Contributor, Cultbytes Ellie Hayworth is the founder of Hayworth, an art consultancy committed to promoting intrepid ideas at the intersection of art and design based between Miami and New York. Ellie works with a nexus of cross-disciplinary artists, designers, and creators in the capacity of artist management, nomadic curatorial initiatives, communications, public relations, and cultural programming. l igram l