A dynamic transformation of everyday cityscapes is on display at The Nehru Centre in London in Akshita Gandhi’s solo exhibition A love letter to my home. The Mumbai-based photographer and multimedia artist is best known for her manipulated images using paint, digital post-production, and collage to expand the limits of her photographic medium, investigating dualities like obscurity/perceptibility and construction/deconstruction.

In Love Letter, Gandhi takes the occasion of India’s 75th anniversary of independence from British Imperialist rule to consider a contemporary Indian identity. Focusing on the cities of Mumbai and Udaipur, Gandhi investigates what post-colonial freedom and independence look like within the daily lives of a people still living amidst deep social divisions and political tumult. There is no denying the magnetism of the exhibition’s comprising works. Entering the space, the viewer is immediately drawn to the vivid fluorescent light emanating from modern doorways and splashes of bright paint strewn across images of historic buildings. Through the works on display, Gandhi uses architecture to reflect a changing Indian urban landscape and questions its reflectivity of the vitality and spirit of its inhabitants.

Nowhere is this more evident than in the work Race Course, Tassavur (2022), a small image hung in the first room of the exhibition. The work, a photograph of a tenement housing structure in Udaipur, bursts with light, energy, confusion and colour. Figures can be found in their homes— a woman peers out of her doorway, a young girl slouches back seated atop a latter. Digesting the work, however, is not a straightforward exercise; elements of the image have been spliced and layered atop in repetition resulting in an effect that fragments the scene near dreamlike abstraction, verging on cubism. The structure’s walls dissolve into shocks of red and blue light layered overtop the image, blocking out clear detail and challenging the viewer to discern what is actual documentation and what is artist manipulation. Place is not overtly identified for us either, rather the work’s title, like others of the series, is half in English and half Hindi, perhaps giving a reference point for a foreign viewer while also grounding the work in local familiarity for the native viewer.

Further into the exhibition is Elphinstone Building (2022) a large-scale embroidery on photograph printed on satin which depicts a monstrous 19th century European-style building. Elphinstone is a relic of a complicated history, erected during colonial reconstruction of what is now modern-day Mumbai, it stands today as a lasting monument to British influence. Gandhi brings the image to life with embellishments of sequins and pink and blue embroidery, reclaiming the architecture with a vibrant visual language that speaks to Indian tradition and weaving together past and present.

While Love Letter sees Gandhi pushing her understanding of her own national identity, the exhibition challenges its British audience to reconsider how it views India apart from the Indo-Saracenic architecture of tourism pamphlets, such as Elphinstone. There is no stable ground to stand on while moving throughout the space—a space, it should be noted that is located squarely within London, offering another layer of complexity to the exhibition and thrusting its images into direct dialogue with India’s former colonising power.

The question that serves as a launching pad for Love Letter: Is India truly free seventy-five years after its independence? is not answered, at least not in a straightforward manner, by Gandhi. Rather the artist uses bold, colourful images to show her native cities in flux, working through the challenges of modern life, while expressing a wish to hold true to the fundamental spirit that makes home special.

The exhibition Akshita Gandhi: A love letter to my home is co-organized by Gabriel Fine Arts and is on view at The Nehru Centre, London W1K 1HF, 23-27 May, 2022. It is also viewable on Artsy. 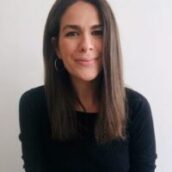