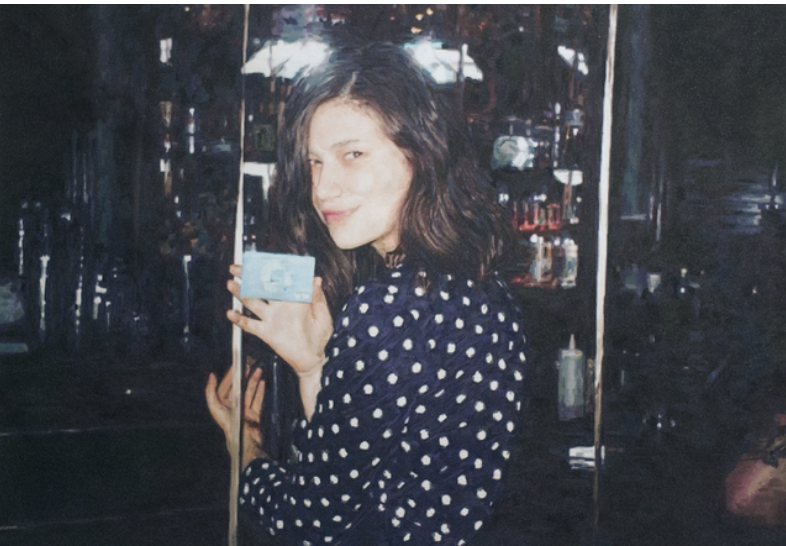 It can be hard to motivate yourself after a full day at work to get yourself over to the Lower East Side or Chelsea—areas which are chock full of galleries, and weekly receptions to celebrate the opening of a new exhibition. If the lure of the (mostly) guaranteed glass of white wine isn’t enough to get yourself in go-mode, think of it this way: New York art gallery receptions are incubators, attracting curious bystanders, local artists, gallery aficionados and art influencers. Don’t stay frozen against a wall, encourage yourself to walk around, check out the art, say hi to the gallerist and talk to people! You never know who you might meet.

I recently took my own advice—at a reception for John Zurier at Peter Blum Gallery (which by the way—shameless plug—was an amazing show for those who missed), I had the pleasure of meeting artist Emerald Rose Whipple. She was born in northern California and spent part of her childhood in Hawaii. Whipple initially studied fashion design at Pratt and worked in fashion before she started to paint. Her pixelated paintings have caught the attention of numerous publications such as Another Magazine, Dazed and Confused, i-D Magazine, Hart Magazine, The Huffington Post, and Women’s Wear Daily.

A few weeks ago, I was able to see her paintings up close in person at the House of McIntosh. Whipple’s paintings were part of the Exhale X Orange Babies first fundraiser, which took place on November 1st.

Whipple takes us through her days working in the fashion world, capturing intimate moments with friends on canvas, as well as what is coming down the pipeline for her.

Alexandra: When I first saw your paintings, I was blown away by the snapshots of your friends. I felt like I was immediately part of these personal, intimate moments. 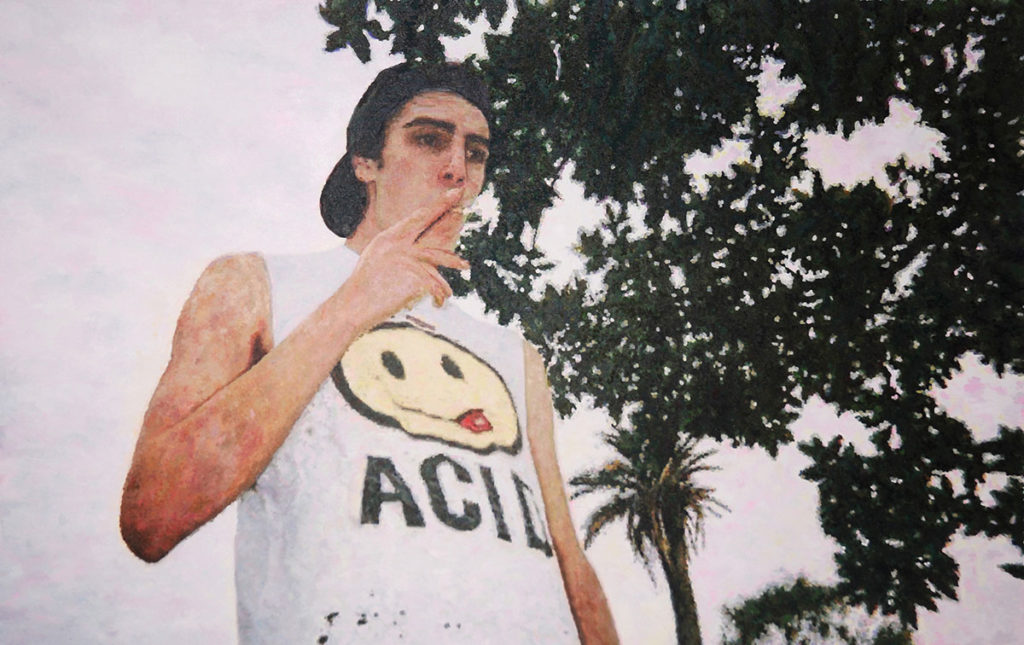 Emerald: Thank you so much! I am so happy that you felt that you were part of the moments in the paintings. Creating space for the viewer to exist is a deep part of the work that I do. I love that you felt like you were a participant of the narratives on view. Relatability is extremely important as I want art to feel accessible to people. It can be intimidating to look at a work of art and reflect upon meaning. I try to make work that anyone can look at and understand, it is also driven by feeling. I want to help bring peace and happiness to people who look at my work. 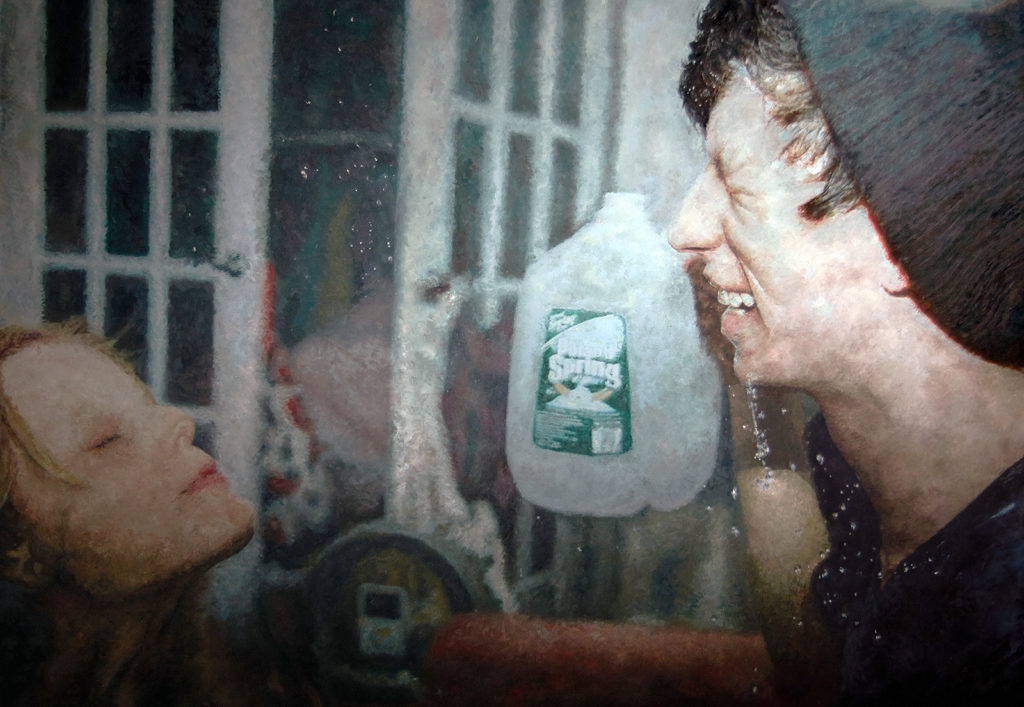 Alexandra: Can you tell me a little bit more about these paintings at McIntosh?

Emerald: The paintings exhibited at the world of McIntosh Townhouse are pulled from several bodies of work. The more candid paintings of my friends are from the series “Eden” and “Genesis: Let there be Light”. In general, my work deals with the concept of the soul and the interconnectedness of all that is. On the surface, the subjects in the painting act as allegories and symbols of this belief. They are a documentation of life and the paradox of the human dilemma.

Alexandra: Were these moments initially staged?

Emerald: The moments I paint are not staged. I am constantly taking photos and have a large image archive I pull from.

Alexandra: Where did the snapshot series come from?

Emerald: A lot of the photos from the paintings at WoM come from my early years of living in New York and finding my way through the fashion industry. The people in the paintings are part of my personal history and represent this transient time between being a teenager and all of us trying to ourselves in adulthood. They are moments of freedom and understanding. 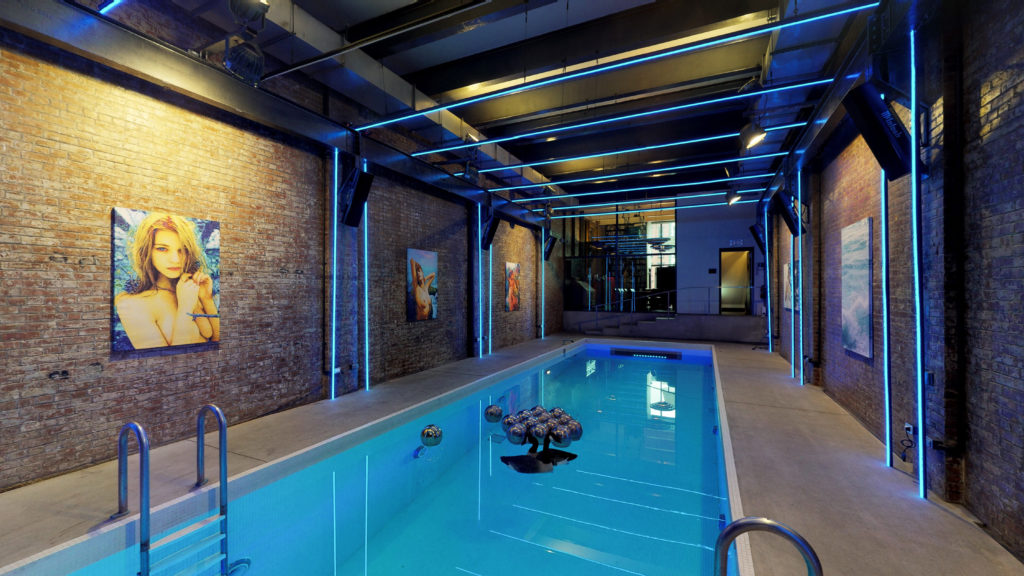 Install shot from World of McIntosh. Photo courtesy of the artist.

Alexandra: And to follow-up on that, how do your friends feel about the series? It’s always interesting to see what people feel comfortable revealing about themselves, and sometimes even the most innocent acts can feel personal if it’s being seen by someone else. Especially since these paintings travel a fair bit and are seen by different people!

Emerald: Consent is really important to me, I only paint images people are comfortable sharing. Sometimes friends aren’t crazy about a photo I want to use and might send a selfie. I think in this digital age of social media we are all more comfortable with being seen and letting people in. Most of the images feel like something that would be on someone’s Instagram feed or on Facebook.

More importantly the images I decide to paint lend themselves to the deeper narrative I wish to communicate through art. The portraits act more as a symbol and selection is rooted by the wish to communicate a theme from ancient philosophy and mysticism. 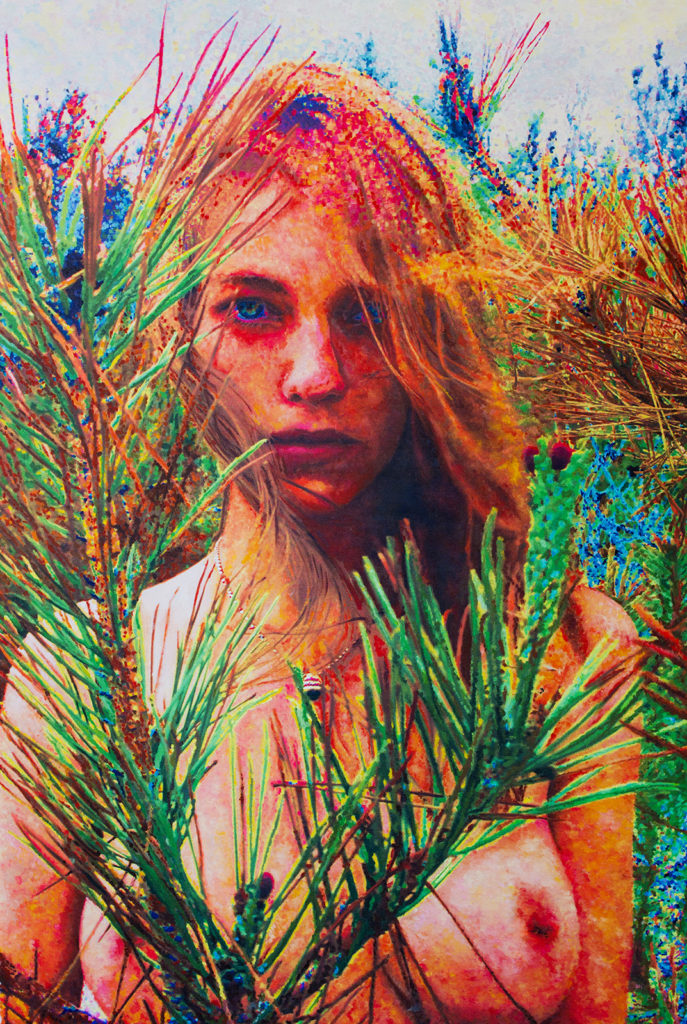 Samantha Gradoville. Oil on canvas. Photo courtesy of the artist.

Alexandra: You mentioned that your studio is based in Chinatown, which is an iconic part of New York and certainly a hub of activity and bustling energy. Do you think that energy carries over into your work?

Emerald: The photos that lend themselves to the paintings are very much a depiction of the downtown youth culture. But I think New York has a bigger impact on my work then a particular neighborhood. I have been between the downtown area most of my New York life (NoHo, LES, Chinatown, West Village) and there’s a large image archive of that time that I still pull from.

The paintings are very different than the photos, though. The photos are more like memories where the paintings carry this weight into the meaning of life, there’s more depth. They touch on the psychology of memory and the moment and the reflection of time.

No matter the neighborhood New York still pulses with this unavoidable energetic thread. I create art to be at peace, and in many ways painting is my escape from New York and from my perception of self, it’s really a meditation. I grew up on the west coast (Hawaii & California) so in many ways, the act painting is about recreating that feeling of home. The peace of floating in the ocean or the stillness of standing alone in the forest. It’s my way of coping with life really.

Alexandra: Are your paintings titled?

Emerald: My paintings are usually titled by the people or places in the work. Analytic and archival. They are more concept-driven by theory over title. 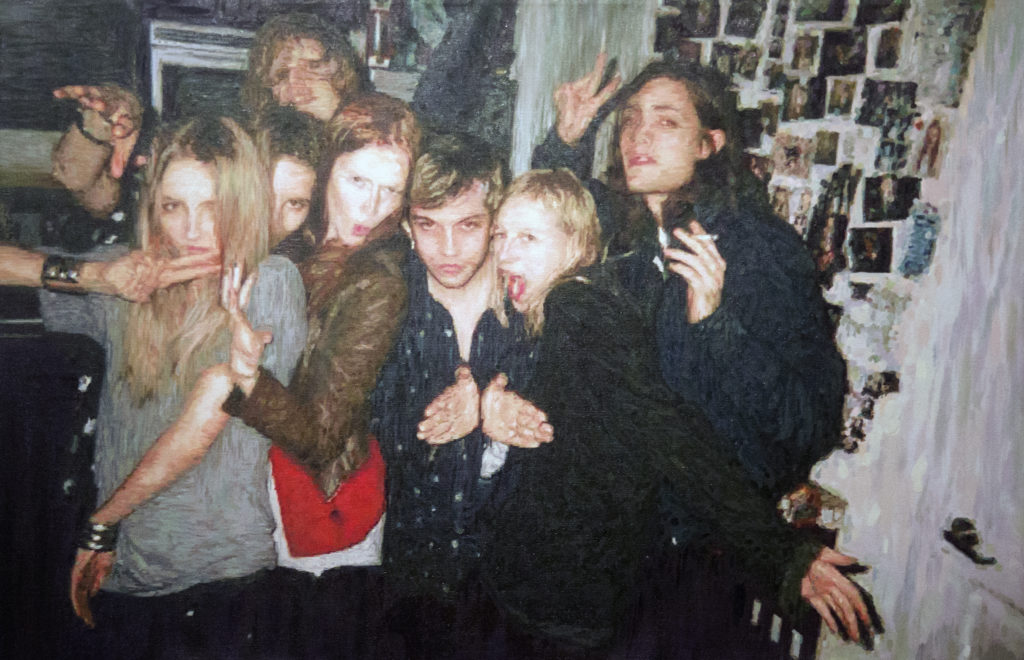 Alexandra: The Exhale World X Orange Babies fundraiser was such an awesome collaboration, and your work fit right in with the layout and structure of the World of McIntosh townhouse. How did the partnership come about?

Emerald: The event was such a beautiful gathering of open hearts, people who want to impact change in a positive way and help to create a beautiful world.

It was all very organic. The partnerships arose out of an existing friendship with Chad Gavery of Recess Assembly. We have been wanting to do a project together for years now. Chad has known about my interest in philanthropy and my desire to give back. Recess Assembly had started on the Exhale World Project and everything fell into place like magic. RA had the relationship with WoM, Orange Babies, and Cur8, it all just unfolded. 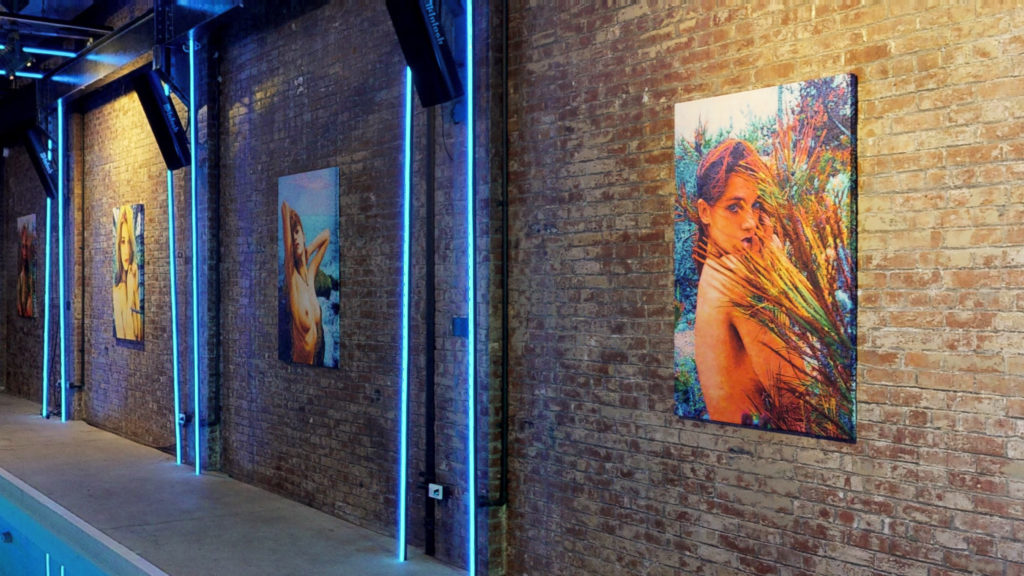 World of McIntosh installation shot. Photo courtesy of the artist.

Alexandra: Do you want to speak a little bit more about the connection between your time in fashion/what you are doing today?

Emerald: I studied Fashion Design and was hired by Marc Jacobs my freshmen year to work with their shoe design team. (My parents are goldsmiths so I grew up making jewelry, thus a strong accessories background.) Following MJ I did a number of things in the industry the past 10 years, from Jewelry Design & production to styling and art direction. The cast of characters in most of my paintings came from this period of my life.

Fashion Design and photography both remain a strong influence in my work! I love the fashion editorials from the 90’s photographed by Wolfgang Tillmans & Juergen Teller, especially the baby Kate Moss photos. Amidst the glamor, they managed to capture something real in the photographs and still do. I also have always loved the way photographers such as Nan Goldin, Dash Snow & Ryan McGinley capture raw honesty with their work. My paintings are more or less a mirror of fashion. In an editorial or campaign there is a combination of storytelling and advertisements, on a more subliminal note. There are entire teams to create a specific image. In many ways, I was tired of the false narrative and was craving to depict an element of truth in my work. I wanted to make something for myself, the fact that art developed into a career happened organically. It really all started as a way to cope with the pressure of my work and life. At that point I started transitioning out of fashion and into art. 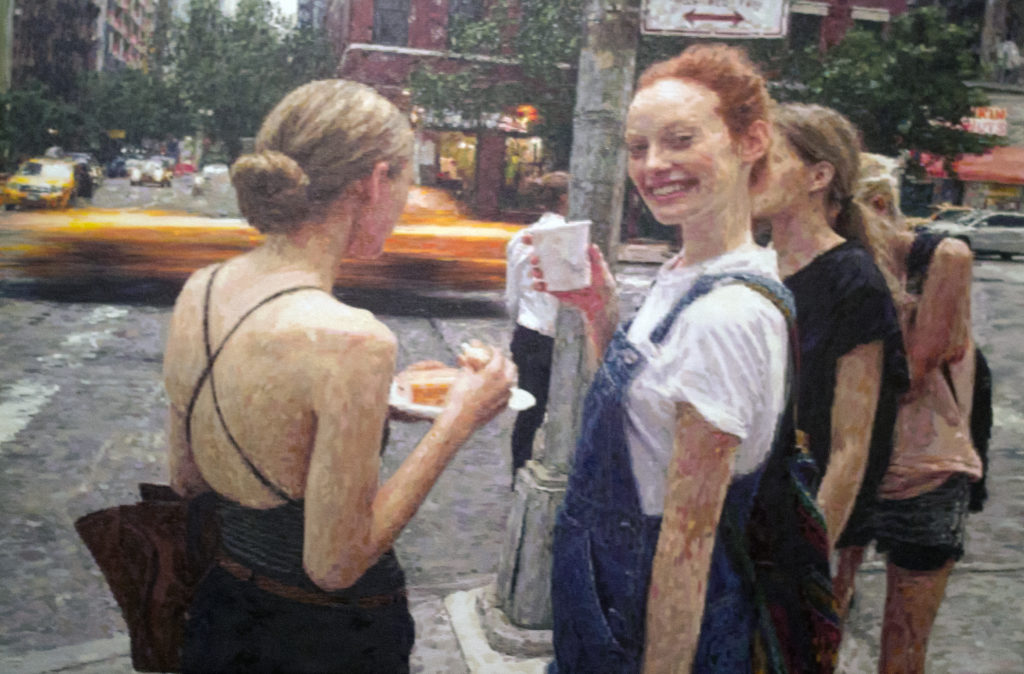 Alexandra: What else is coming down the pipeline?

Emerald: I have a few shows in dialogue in different places on the horizon , which is always exciting. (Will have confirmation next week) I may be at Art Basel in Miami with Cur8 Gallery who helped produce the event at WoM, as well as an upcoming show with Galerie Jan Dhaese for Art Brussels in Belgium and a show with Galerie Anne-Claire Simon in Paris, France.

I am really excited about my newest painting series ‘Moving Image of Eternity’ the title is pulled from a quote by Plato in which he describes the creation of the universe. The key themes are Movement, Memory, Light & Time, It focuses on the philosophy of presentism and the idea that eternity can be found in the present moment. Naturally, there is a mix of friends all over the globe as well as some beautiful places.

Yes, everything is golden!!!