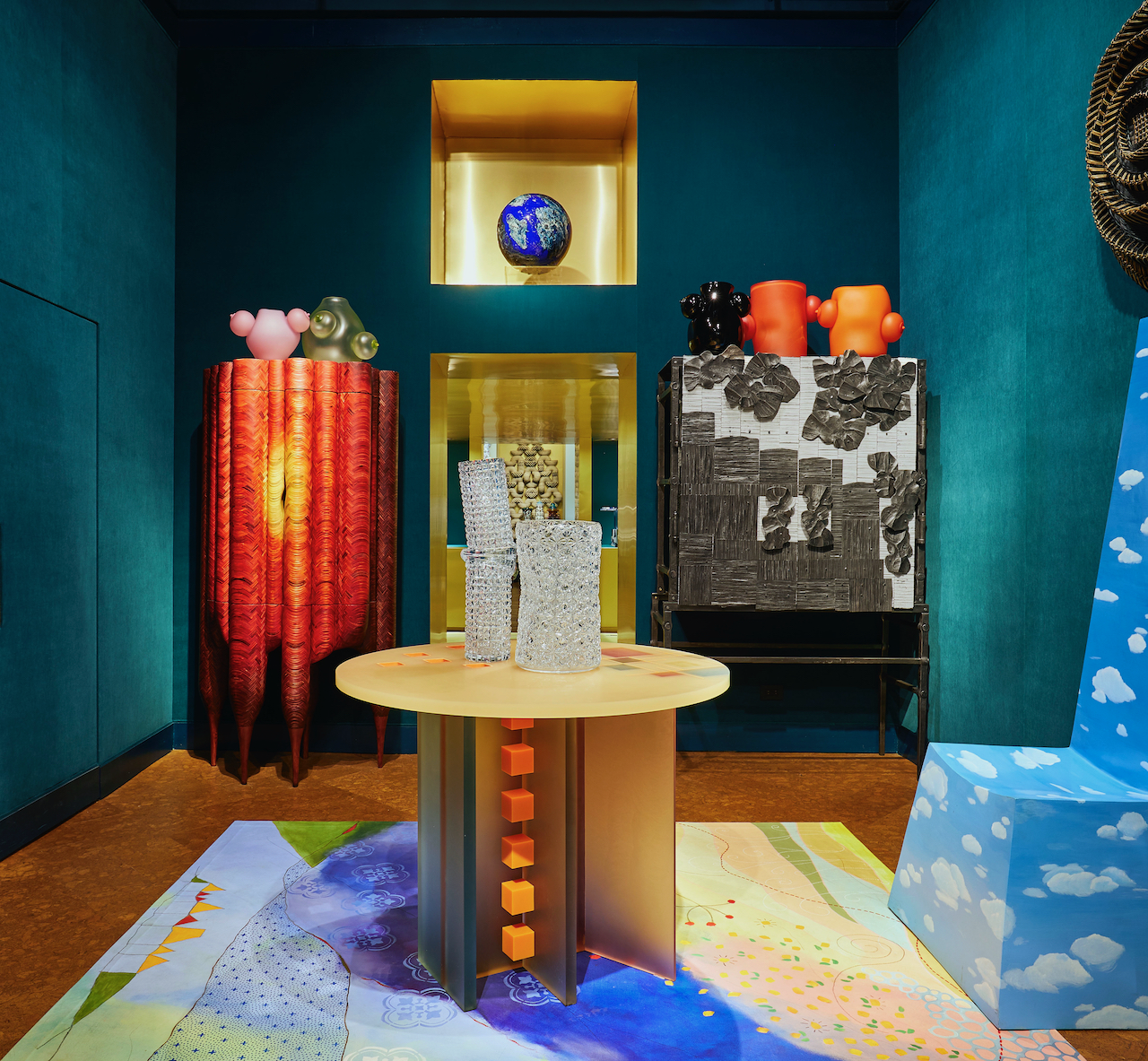 Just off of Times Square is a design experience like no other. While technically a commercial endeavor, Culture Object is as much an educational experience and sensorial feast as it is a design gallery. Its current show, New Glass from Sweden, is a perfect example of how Culture Object combines decades of expertise with a passion for history and a keen eye for contemporary design. Highlighting the historic significance of Sweden as one of the world’s top producers of glass, the show explores how some of the leading contemporary glassmakers are pushing the boundaries of long standing traditions. From graal to ariel, the artists in the show create technically complex, visually stunning works that pay homage to their nation’s heritage while bringing glassmaking into the 21st century.

Walking into Culture Object is like stepping into a meticulously curated menagerie of colors, materials, and designs. Founder and owner Damon Crain launched the space right before the pandemic after working for years in galleries, museums, and as a private advisor. He has since created a vibrant, eclectic, and highly impressive selection of design objects that span materials and cultures.

New Glass from Sweden showcases Crain’s eye, as well as the enduring talent of Swedish glassmakers. Six artists are included in the show, each working in various techniques and with vastly different aesthetics. Featured are Micke Johannson, Simon Klenell, Fredrik Nielsen, Morgan Persson, Nina Westman, and the duo BarroLevén, made up of artists Ulrika Barr and Kristina Levén. Many have ties to Sweden’s legendary glassmakers including Kosta Boda and Orrefors. Some have trained together or collaborated on projects, a key feature through Swedish glassmaking history that has led to some of the groundbreaking developments in the field over the last few centuries. With the support of contemporary institutions including the National School of Glass (Riksglasskolan), University of Arts, Craft and Design (Konstfack), and The Glass Factory at Boda Glasbruk, Swedish glassmakers continue to push the boundaries of artistry and technicality.

Work by Orrefors-trained Klenell is the first to greet visitors to the show. Sitting atop a short wall that hides the rest of the gallery from the street, Klenell’s cut glass, sculptural vases pull the eye in instantly. Architectonic in design, the works are made of geometric shapes, each cut separately and then glued together with hot glass. Klenell masters this technically complex process, heating the pieces enough to combine them without compromising the forms or surfaces of each individual part.

Klenell brings the long legacy of cut glass into the 21st century. With ties to traditions dating even to ancient Rome, cut glass has been popular throughout history. Cultures around the world preferred the style, and cut glass was seen anywhere from Islamic objects to Victorian chandeliers to American tablescapes. As taste changed and developments in technology progressed, cut glass fell out of fashion at the end of the 19th century and has since become associated with a past era. Contemporary use of cut glass is often limited to cocktail glasses, particularly the whiskey-based Old Fashioned.

Klenell makes a strong case for its revival. His sculptural designs are sleek, intriguing, and seem to defy the very nature of the materials. Pristine patterns are made slightly askew with subtle indentations in the surface. Perfect cylinders are stacked in towers that tilt, as if adhered by accident. Klenell adds an exciting element of play and imperfection, pushing against the view of cut glass as dated or stuffy and demonstrating how it can be used in contemporary design.

As the viewer walks around this first wall and into the gallery space, Culture Object explodes into colors, textures, materials, and shapes. New Glass from Sweden is particularly exceptional from both a design and historic standpoint. Even visitors without knowledge of glass can learn from the enthusiastic Crain, who seems to have an endless wealth of knowledge.

Included in the show are three exceptional vases by Persson and Johannson that continue the legacy of Swedish glassmakers as leaders of the graal technique. A complex layering of glass that results in a colorful image seen beneath a clear surface, the technique has its origins in the early 20th century when Orrefors began emulating the popular cameo glass designs and the famous work of French Art Nouveau artists like Émile Gallé. At the same time, Orrefors brought on painters Simon Gate and Edward Hald, a decision that proved essential to the development of the painterly technique of graal. Having studied under Henri Matisse, Hald was particularly useful in refining the imagery that made graal so captivating.

Persson’s graal vases reveal playful, cartoonish figures who appear to be enjoying a day at the beach. In one vase, a figure holds a drink in hand and smiles with friends. In another, four men in various hats play with a large, black beach ball. Both vases act as documents of everyday life, the joyous moments captured forever in the surface of the glass. They are paired with Johannson’s equally impressive graal vase of a colorful monster. Vines and tendrils surround the rainbow creature that appears to have emerged from a radioactive swamp. Johannson and Persson show a fresh new approach to the complex technique with contemporary imagery.

The Stockholm-based duo BarroLevén takes a very different approach to glassmaking. They make their large, dense forms with thick walls in an environmentally conscious manner, incorporating industrial air filters and insulating material that are made of recycled glass. The result takes on the form of globe-like shapes with heavy bulges and folds of glass that reveal almost cosmic displays of color beneath the surface. Every angle seems to reveal something new, as if the glass has captured an endless alchemy of swirling colors.

The exhibition includes a particularly beautiful green vase by BarroLevén that resembles a mossy tree or forest floor with vines and roots weaving through the surface. The title, Slippery Forest, further strengthens this connection to nature. Hints of brown, silver, and gold burst through the bed of green in striated layers that recall a geode or the gills of a mushroom.

Also using recycled glass is Westman, who embraces the female form with anthropomorphic vases that have breasts attached. Westman’s work often resembles body parts and organs, such as eyes, hearts, brains, and teeth. Her works are playful and humorous with titles like She’s Got Balls. Westman’s work supports her social values, including gender inclusivity and equality, as well as her ongoing mission of breaking down misogynist notions. The breast vases expand upon an earlier project of Titty Bombs, small breast votives filled with oil and topped with a wick so the owner can ignite both light and a conversation on social justice.

Westman is a member of BOOM!, a female separatist glass group that seeks to support women glass artists with new opportunities to collaborate and strengthen their skills. BOOM! is an example of one of the many contemporary groups, studios, and cooperatives working to foster and support Swedish glassmaking.

Throughout the show, there is a strong sense of revival and re-imagination. The artists all pay homage to and continue the legacy of glassmaking in Sweden with their own contemporary twists. Emblematic of this balance of historic and new traditions is Nielsen, whose practice centers on a kind of rebirth. Nielsen also trained at Orrefors, providing him with a solid foundation in glass technique and knowledge. He pushed this foundation into the contemporary world, founding a studio, The Garage Stockholm, with Patrick Hällbom, as a center for radical creativity.

Conceptual, experimental, and even performative, Nielsen’s work has made him a leading figure in contemporary glass. He creates his work by smashing vessels and then remelting them into new shapes and combinations. The results are painted, often using the same material to paint cars, adding an industrial elements and creating a vibrant, reflective surface, like his red vessel seen in the show. Like Nielsen’s practice, the final product is difficult to classify as he blurs the boundaries between art and glassmaking.

With Sweden’s rich, impressive legacy in the history of glassmaking, it’s no surprise that makers today continue to excel in the field. They are trained by and working with some of the factories that created the very techniques that formed modern glass. With any legacy, it can be difficult to push beyond the traditions for fear of offending what has been considered the norm. Sweden is a case study in innovation. Sweden brought graal to the world, refined and mastered techniques used for centuries, and fostered creative growth. New Glass from Sweden is the product of this tradition of artistry and a testament to the ongoing brilliance of Swedish glassmakers of today.

A Fresh Take on the Meaning of Space at Revolver Galería