I meet up with Swedish artist Carin Ellberg outside her studio, a cream-colored building from the second part of the 17th century called Malongen. It is a stone’s throw from Nytorget in Stockholm’s neighborhood of Södermalm, a former working-class neighborhood turned hip and appointed. Arriving on bike, Ellberg happily greets me wearing a light lilac sweater and a brown vintage leather jacket. Her chestnut brown hair in a long page with a fringe, and dark purple eyeliner highlighted her gray-blue eyes. Her style is an embodiment of the late 70s but also reflective of the colors that dominate her work. She looks similar to the photos I have seen of her in art school. “I think it’s the yoga!” Ellberg exclaims jokingly, telling me that she just came from a class, “but I have experimented with different styles over the years,” she continues, “for instance, I had a Prince period in the 80s, when I always wore purple, MC jackets, and boots with high heels.”

She fishes up her keys from her bag and opens the door to reveal an impressive double room filled with soft milky light. “It was a dream come true to get a space here. I have been in line for it since I graduated in 1989 and just two years ago, they called me and said that there was a studio available.” The building houses the studios of Ellberg and twenty-one other prominent artists from the Swedish art scene.

Being in Ellberg’s studio is like stepping into her finely tuned universe with big paintings in acrylic paint in yellow, green, light blue, and lots of pink on the walls, mixed with sculptures in iron and glass hanging from the ceiling. A colossal table with paintbrushes, watercolors, and sketches as the center stage. And, in between the sketching table and the sofa another hanging sculpture in Ellberg’s trademark materials; skin-colored tights and bookbinder glue. A material she started to experiment with during the 1980s which some of her site-specific sculptures in green patinated bronze also reference.

Her current solo exhibition at The Nordic Watercolor Museum titled It May Be Something the Sea Lays at My Feet, is a tribute to her watercolors, but also some of her paintings and hanging sculptures are included in the show, such as Mother of Pearl (2016), which is a part of the collection of the Museum of Modern Art in Stockholm.

“Over the past ten to fifteen years I have mainly worked with watercolors. I start sketching in ink and watercolor on a pad. Convenient and easy-to-carry sketch pads allow me to dive into my world quickly. And then, from a sketch, a painting might emerge.” The watercolors and paintings also play a part in becoming sculptures, where Ellberg’s drawn line can come out and become three-dimensional. The oval form in her paintings also tend to reappear in pink or yellow glass, as details in her sculptures in iron, which are a reference to the third eye.

Nature carries a soulful healing energy. I truly believe that we are all one and it is this natural sensation I try to capture in my work.

Ellberg’s imagery is partly influenced by the scenic surroundings from her summer house in Beddinge in the south of Sweden, but also from artists that employ dreamy surrealism across mediums such as Carol Rama and most visually striking in relation to her sculpture is Louise Bourgeois, about which she says: “There is a sensualism in Bourgeois’s way of using the material and it made me want to create my own.”

Her artistry is characterized by playfulness and lightness and in her abstract, dreamlike landscapes it is dazzling to see her deep appreciation for nature and spirituality. “I have had a special relationship with nature since I was a child. Nature carries a soulful healing energy. I truly believe that we are all one and it is this natural sensation I try to capture in my work.”

Ellberg graduated from the Royal Institute of Art in 1989. Since then, she has collaborated with the successful gallery duo Cilène Andréhn and Marina Schiptjenko. Who have helped build the careers of many prominent Swedish artists, especially females. Her first show with the gallery presented The Kitchen. A video work based on a performance she did together with the artist Katarina Lindberg Cavallin at Kulturhuset in Stockholm. “Marie-Louise Ekman had just become a professor at The Royal Institute of Art, and she started a video workshop and encouraged us to use everything we could find in the National Theater’s storage room for props. We created the whole scenography ourselves, with lots of details painted by hand.” One of Sweden’s leading artists, Ekman came to the fore during the 1960s a time marked by political upheaval and social progress.

In the humorous piece with Ellberg and Lindberg Cavallin the viewer follows the two artists preparing and eating breakfast to upbeat music. Chainsmoking by the breakfast table interchangeably wearing various big, curly wigs, morning robes, and dresses, the artists re-enact their theatrical morning routine in a typical Swedish suburban kitchen. In the end, Ellberg is vacuuming in an ensemble consisting of a pink wig, a yellow dress from the 70s, and feathery slippers.

“The Kitchen was a feminist statement. Like I mentioned earlier Marie-Louise Ekman had just joined the Royal Institute of Art and she was an important role model for me. She was the first female professor there and was an established artist with a family. Several of my male professors loved to point out that having kids was not on the horizon if one wanted to succeed as an (female) artist. I was young and angry and did not want anyone to hold me back. ‘I will have kids,’ I thought. During that time, I was mostly doing pieces in pink. Slimy things in silicon that were considered girly, light-minded, and ugly. It was an enjoyable period because we could do whatever we wanted. In the end I think what Marie-Louise Ekman imparted on me was a sense of freedom. Freedom to do and be whatever I wanted as an artist but also as a woman. To act on my own terms.”

As a mother of two, represented by one of Sweden’s leading galleries, and exhibiting widely, Ellberg did not let herself be marginalized by the crumbling patriarchal structures present in her graduate program. Currently, Ellberg is in the process of planning three different prestigious site-specific works. One is a group of sculptures for a preschool in Skellefteå called Are Stones Sleeping? That piece will consist of three bigger stones by a tree with additional forms cast in bronze. The second one is a commission for a new bathing house in Linköping. A hanging sculpture in steel called Water Vegetation. And lastly, for a hospital in Ersta a mural painting on an eight-meter-high wall with details of pink glass blown bubbles.

Before I leave I ask about her relationship to the color pink, and, her answer reflects how her artistry has matured over the years, but also how women have become more visible in Swedish society: “Initially working with pink was a rebellious act during my MFA, no one thought that you could work with that color and be serious. Since then, the color has followed me. Now, I find that hues of pink have a very calming and healing effect.”

It May Be Something the Sea Lays at My Feet is on view at The Nordic Watercolor Museum Södra Hamnen 6, 471 32 Skärhamn, Sweden through January 28, 2023.

The photographs were taken by Nikodem Calczynski a Stockholm-based photographer and the founding director of Odem Atelier, for this article. 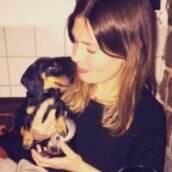 Writer, Cultbytes Malin Ebbing is a fine art professional and journalist based in Stockholm and Italy. She has a masters' degree in fine and decorative art from Sotheby’s Institute of Art in London. During the two decades that she has been active in the art world, she has worked with auction houses, contemporary art galleries, and art fairs. Her writing focuses on visits to studios and houses of artists and art collectors in Europe and interviews with artists. l igram l