LET THERE BE NORM in conversation with Joey Holder 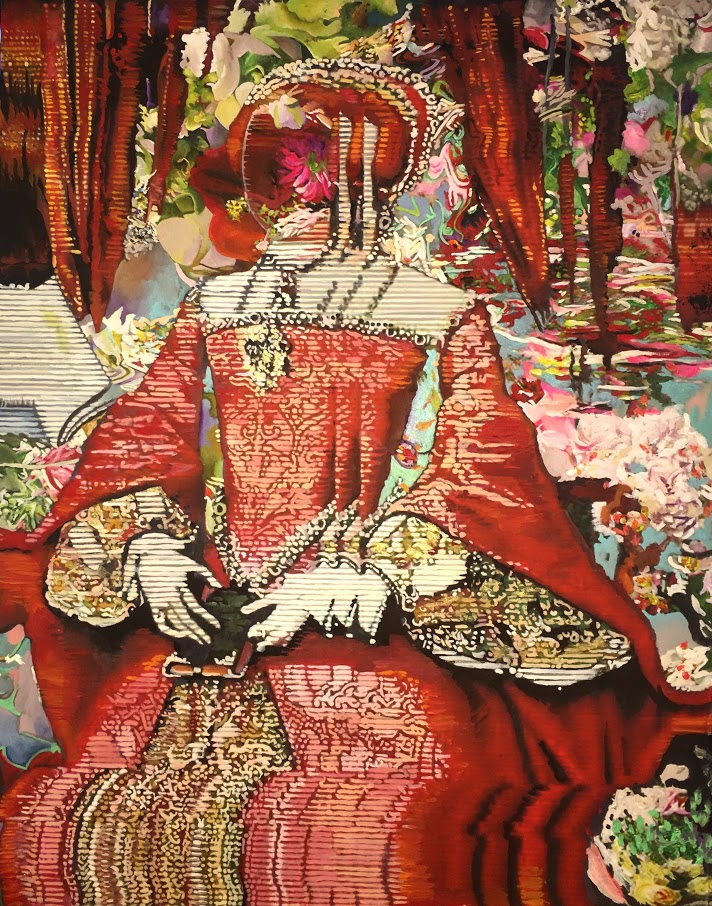 Jeanette Hayes (b.1988) latest solo show, Royal Girls, in Stockholm, showcases a total of eleven works by New York based artist, seven works in oil on vinyl and wood, two works of embroidery on fabric and two video works. Hayes, a Chicago native, caught the attention of the art world shortly after graduating from Pratt, with her “Botticelli Photobooth” series depicting Botticelli angels spliced with digital iconography. The paintings were part of a group show that included Jemima Kirk and Jay Miriam at Half Gallery in 2013. Hayes has not only continued to dazzle the art world, with shows at Motelsalieri Gallery, Eric Firestone Gallery, and 55 Gansevoort, now 56 Henry, but she has also become coveted in the world of fashion. The art industry’s favorite young artist has collaborated with Alexander Wang, Proenza Schouler, and Chanel.

The exhibition in Stockholm, that opened in November, is curated by Alida Ivanov, a Swedish curator, and marks Hayes’ second appearance on the Stockholm art scene. Ivanov and Hayes’ first worked together  for Hayes’ Stockholm debut, the exhibition “Powerful Babies” at the Museum of Spirits. This time around, however, the setting is everything but regular art space. Instead of showing in a gallery, gallerist Eva Livijn now uses her impressive home as a showroom and to stage exhibitions.

Located in Östermalm, a posh inner-city district of Stockholm, Livijn’s turn-of-the-century apartment is prime-real estate on the first floor with views overlooking Karlaplan Square. It is a place both where history and the contemporary as well as the everyday and luxurious merge seamlessly. In the living-cum-dining room, which functions as the exhibtion space, Haye’s work is curated within the home environment: amidst a stuffed peacock, a corner fireplace, a chandelier, and several “regular” art pieces. The visitor finds herself in a casual display of the non-ordinary and majestic. This mixture of nonchalance and ancestry is also experienced when walking through the substantial library room leading to the living room. The home, in its entirety, warmly welcomes its visitors in comparison to the iciness that can be experienced when entering into some white walled galleries. The unfamiliar guest might just assume that Hayes paintings have hung above the sofa forever.

“By contrasting royalty, that stands for what is distanced and durable, to the digital, the latter emerges as encompassing and evanescent in Jeanette Hayes’ work.”

Hayes’ uses the cacophony of the digital spectrum to weave and copy paste portraits of our time. Figures from old masterpieces appear as a backdrop to Japanese anime, Snapchat style facial caricatures as well as glitch distortions. Based on the initial scholarly demand to learn the techniques of classical painting, in her work, Hayes plays on art historical references as she explores the meaning of history in our current times. Like other (often female) contemporary artists who are interested in the digital, her work also contains some elements of textile craftwork and collage as she contemplates how this new kind of network is entangled with our lives.

Her video works “???Paradise???” and “Holding Court” first come across as late night explorations of YouTube channels. Amidst the odd and hunourous footage, narrative of majesty and amateurism unfolds. The piece is suddenly interrupted by a picture frame in which the host of the exhibition and the artist together smile back at their audience in the space. Just like the viewer must discern the curated exhibition from the home-setting they are reversely faced with the author of the artwork and dealer in the piece. The videos, paintings and embroidery comment on Hayes’ own creative and socio-critical artistic process, which is the basis for all her work. 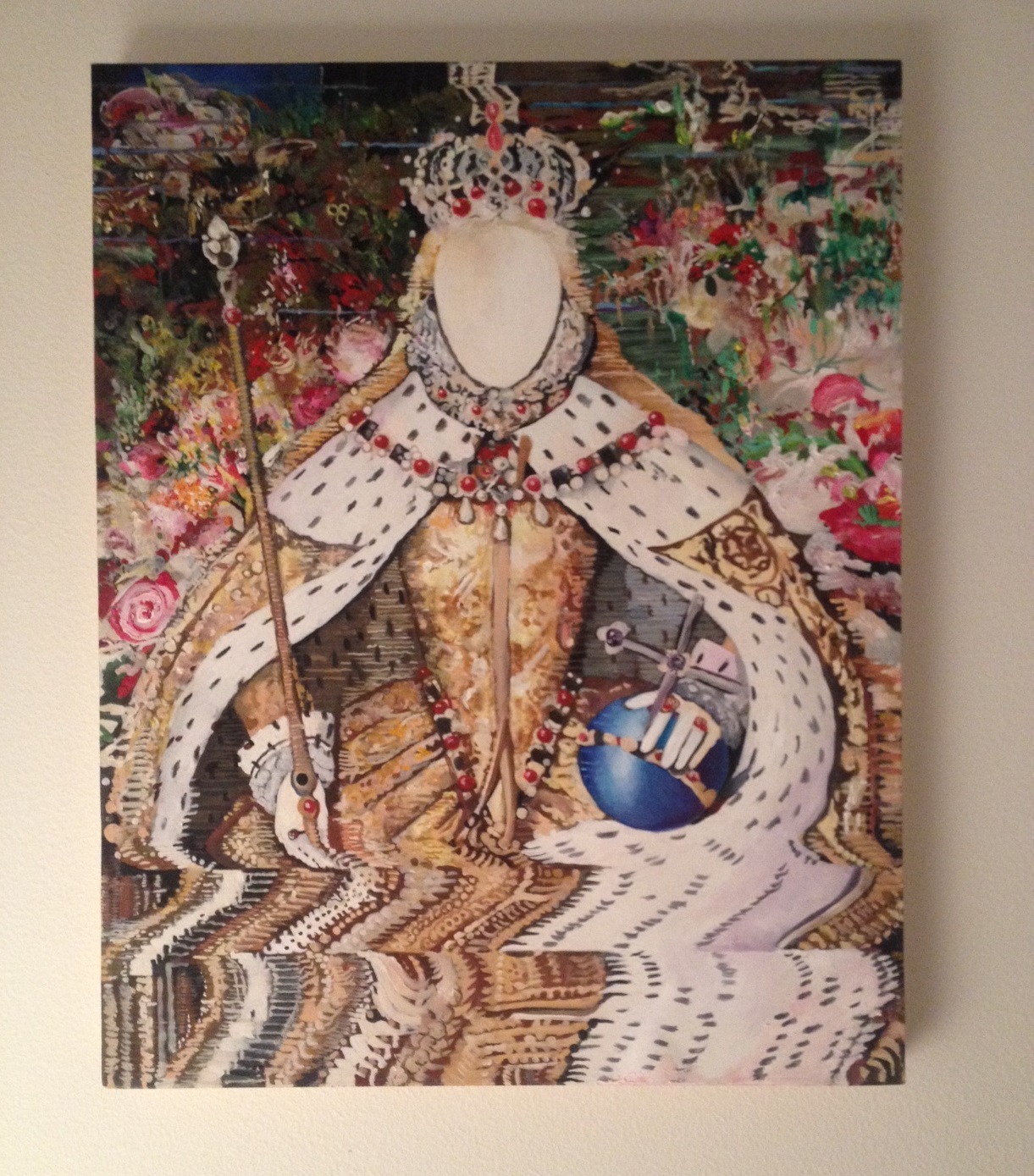 Using glitch aesthetics in several paintings, Hayes refers to on the one hand a kind of metaphorical glitch, the royal as the higher ground. On the other hand, her paintings echo “royal bitches”, the misguided idea of being better or too good for something. In a more general perspective, her use of glitch distorts the perception of history and class society.

Hayes’ work is political taking a critical stance to consumption. By contrasting royalty, that stands for what is distanced and durable, to the digital, the latter emerges as encompassing and evanescent. While art history rests on the portraits of influential people and heroic depictions of battlegrounds, the digital sphere has become the place that dictates, what we pay attention to and how we predict political developments. Digital media is shaping our way of both viewing and running the world. With the new president-elect, who is famous for his numerous misogynist utterances on Twitter, the traditional map of political careers has been turned upside down. The US election also has shown that women still struggle to be heard. Hayes’ embroidery on fabric works “Who Run The World (Girls)” 1 & 2, echoes Beyonce, reminding us that every girl is a leader. Hayes’ work highlights the possibilities of, but also the hierarchies and power structures that permate the the virtual and physical world.

ROYAL GIRLS is open by appointment through December 18th in Stockholm, Sweden.