“We’re no longer living in an ‘emergency/disaster’ era,” artist Madeline Hollander said to the packed crowd on a recent evening at the Museum of Contemporary Art in Los Angeles. “Global warming, superstorms, and the [ongoing] pandemic are a part of our new reality. It doesn’t make sense to do an emergency drill once a year. We need to come together, learn how to support one another, and discover what new infrastructure is needed to fit in this new reality,” she finished to loud applause.

Discussions like these were at the core of the August 25th panel “Approaches to Sustainability: A Conversation with Artists Engaging with Environmental Issues”, which was organized and moderated by Annabel Keenan, an independent curator, art advisor, and writer who focuses on contemporary art and sustainability for The Art Newspaper, Cultured Magazine, and Cultbytes, among others. Hollander was joined by fellow artists Andrea Bowers, Patty Chang, and Jonah Jacobs. “The artists I invited to participate all have very different practices, backgrounds, and approaches to sustainability,” Keenan said. “They touch on themes of environmental and social justice, climate change, and science, among other issues. I wanted to introduce some of the many concerns of artists interested in sustainability, in the hopes that the panel would be relatable to an equally broad, diverse audience.”

Two of the main questions that drove the panel were, “What is a sustainable life?” and “What does it mean to have a sustainable practice as an artist?”

Many art institutions have joined the climate justice and sustainability conversation, such as MoMA PS1 turning into a temporary shelter for displaced residents during Hurricane Sandy in 2012 or Hauser & Wirth committing to cut their carbon emissions by half by 2030. Making an art space less environmentally toxic isn’t just simply lowering the electricity bill, installing solar panels, or reducing reliance on gas and oil. It also includes paying staff a liveable wage, supporting and highlighting artists whose practices center on sustainability, and hiring people to specifically address environmental measures.

“Approaches to Sustainability,” the panel, touched on all these points. The four participating artists have diverse and unique approaches to sustainability: Bowers is an interdisciplinary artist whose practice highlights activism; Chang is a performance and video artist who explores the intersection of art and science; Hollander is a choreographer and installation artist interested in individual and group behaviors in response to environmental and social crises; and Jacobs uses the method of up-cycling to create sculptures. All of the artists are based in Los Angeles, except for Jacobs, who resides in his native Cleveland.

Sustainable artistic practice is a winding road. As a self-taught artist who works with non-traditional materials and is committed to environmentally friendly practices, Jacobs work shows how up-cycled materials can be used to create visually stunning and engaging pieces. In the context of the panel, he highlighted some of the challenges he has faced and emphasized that he has to find a balance between being eco-friendly and obtaining specific results. The majority of his fantastical, colorful sculptures, such as Green Internode #1 and Polyp #2, are made of cardboard, dye, and oatmeal, amongst a range of other organic materials. He discussed how he harnesses the process of decay as a sculpting tool but also that he has been using polycrylic, a non eco-safe water-based protective coating, to ensure the longevity of a project made with oatmeal. This tension between being sustainable and operating a successful artistic practice came up often throughout the panel.

The artists presented one by one, allowing ample time for the audience to grasp their individual practices and approaches to sustainability. Hollander’s work questions what local resources and materials are available for artists to use, and how an installation can affect the environment surrounding the participating institution. Hollander discussed her recent project Nosecone: EF (2019), a site-specific installation that was part of her larger contribution to the 2019 Whitney Biennial, Ouroboros EFGs. Located at the southwest corner of the Whitney Museum, this segment of the museum’s flood mitigation system served as the point of contact in the case of an emergency, such as the Hudson River flooding. Hollander also spoke about her installation Heads/Tails (2020), which was staged at Bortolami Gallery in New York and closed two weeks before the pandemic lockdowns were first initiated.

Unlike Hollander’s other projects, Heads/Tails did not feature any human actors and instead consisted of hundreds of salvaged automobile headlights and taillights that synced in behavioral patterns relating to the traffic outside of the gallery. Hollander revealed that she initially wanted to direct traffic outside of the gallery in relation to this piece, but realized that New York City traffic routes are carefully strategized by the NY Department of Transportation through an algorithm, weather patterns, and more.

Chang, who utilizes performance, video, and installation to explore colonial legacies and the environment, discussed her recent collaborative project, Learning Endings (2021 – Ongoing). Chang worked alongside Astrida Neimanis, Associate Professor of Gender and Cultural Studies at the University of Sydney, and Aleksija Neimanis, a wildlife pathologist. The group sought to answer the question, “What can we learn about endings during climate crises through necropsy?” The project began in January 2021, at the height of the COVID winter surge and early vaccination efforts. As part of their investigation into death and dying, they interviewed various scientists about their emotions surrounding end-of-life care for sick animals. As Chang and the Neimanises live in three different countries, they met over Zoom to discuss their findings and make further connections between the interdependence of animals, humans, and the environment.

The final panelist to present was Bowers, whose acclaimed mid-career retrospective at the Hammer Museum closed on September 4. She is currently focusing on eco-feminism and greenwashing in her artwork, as well as supporting and working with the Redwood Forest Defense and various environmental legal defense funds. Bowers is well known for highlighting activism and reform in many of her projects, with these legal and social movements fighting for environmental justice, immigration, and women’s rights. Some of these works include Letters to an Army of Three (2005), a collaborative project with the activist group Army of Three to spread awareness about receiving abortions in Mexico and Japan, and Radical Feminist Pirate Ship Tree-Sitting Platform (2013), a sculpture that references Bowers’ decades long relationship with a group of activists who refuse the destruction of trees through tree-sitting. During her presentation, she chastised numerous corporations, such as the Green Diamond Resource Company, for claiming to be sustainable while cutting down trees for their own gains.When asked by Keenan why it is important for her to uplift activists, Bowers stated that she documents individual stories of activists who are often excluded from the 24/7 news cycle and that her videos often help activist groups when they are fighting legal cases in court.

During the Q&A, some of the artists touched on the difficulties of working with institutions to implement sustainable measures. Bowers said that she tries to make works on site instead of dealing with costs and waste associated with crating and shipping, and noted that one of the roadblocks she encounters with institutions is insurance rates. In addition, international customs often forbids the use of recycled crates, thus curtailing sustainability efforts. Jacobs stated that artists who receive pushback from institutions for their climate activism might have been embraced by past alternative art spaces. In his opinion, the DIY scene was great fifteen years ago, but now institutions focus today on artists who are more financially stable. This section of the Q&A did involve proposed solutions to such issues, including reduced waste and the acknowledgement that art initiatives—such as Artists Commit, Galleries Commit, Gallery Climate Coalition, and Barder.art—are providing a forum for artists confronting urgent issues such as environmentalism and sustainability.

The panel was MOCA’s latest offering as part of their environmental programming sponsored by the museum’s Environmental Council, a group created to support the museum in moving in a sustainable direction and the first of its kind for a major arts museum in the U.S. According to MOCA’s website, the series “highlights the museum’s work around climate, conservation, and environmental justice. […] The series presents artists, activists, and scholars committed to critical ecological issues in Los Angeles and globally.” Haley Mellin, co-founder of the Environmental Council, echoed this notion: “When [David Johnson and I] founded the Environmental Council, the aim was to support collaborative, intersectional dialogues among artists, institutions and publics. This is the first full year of sustainability programming, and I sense that audience dialogues are key to learning about nature, climate and justice, and that the programming will hopefully support this.”

In closing, Keenan was honored that MOCA provided her the opportunity to organize and moderate a panel related to sustainability. She stated, “Throughout history, artists have provided creative solutions to collective problems, and I wanted to amplify the solutions currently being explored to work through the urgent, global issues of sustainability. It’s important to continue to have these conversations so they become second nature, and panels like these are a big part of furthering and sharing this work.”

A recording of the panel will be shared on MOCA’s website. 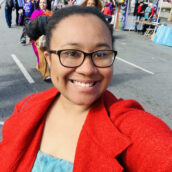 Writer, Cultbytes Adrianne Ramsey is an independent curator and arts editor based in Los Angeles and the San Francisco Bay Area. She is currently an MA candidate in Curatorial Practices and the Public Sphere at USC's Roski School of Art and Design. l igram l