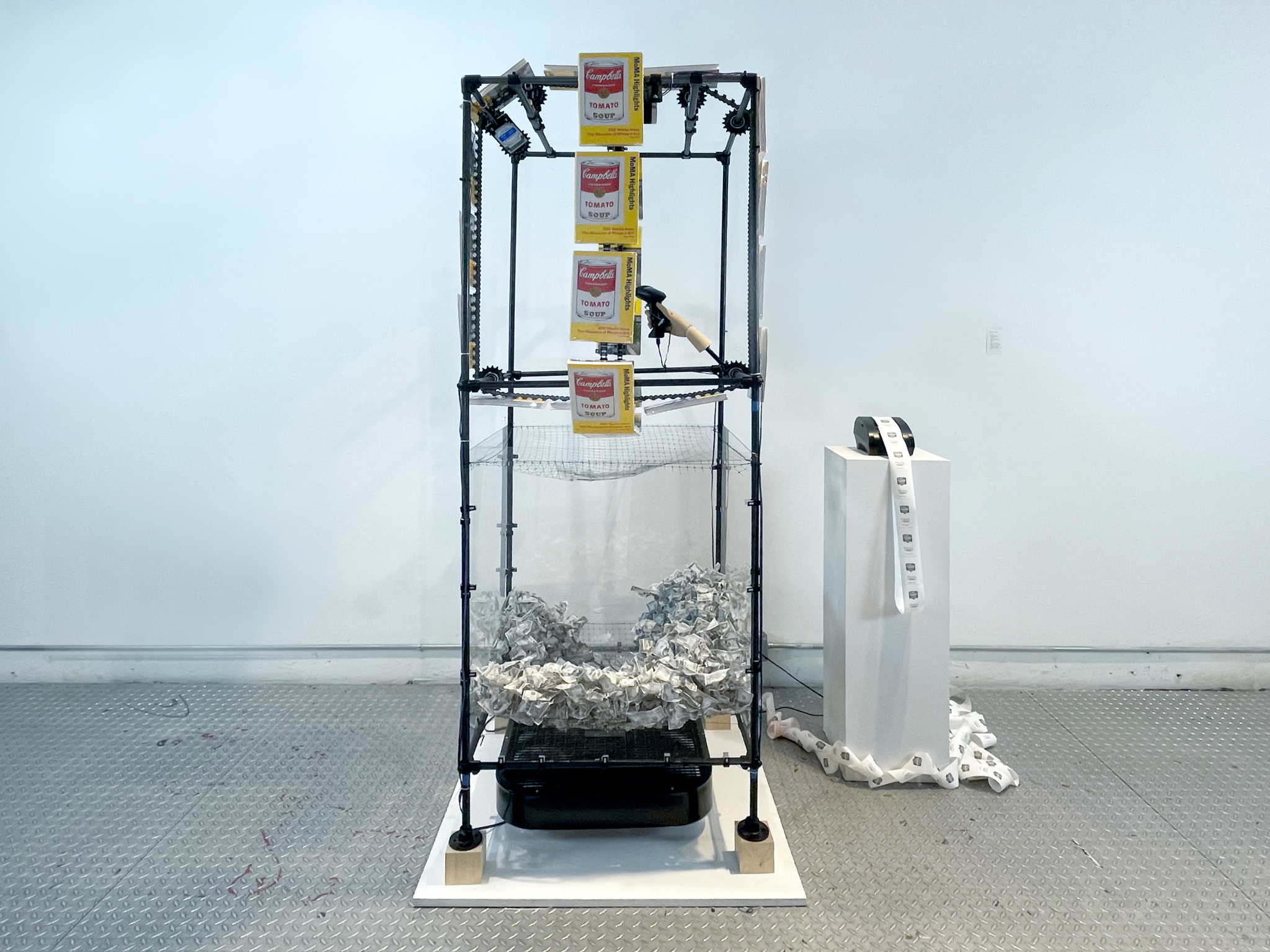 In New York, delivery workers zooming by on bikes carrying large, square bags stuffed with orders relayed through a web of interfaces are part of the city’s fabric. They pedal to the buyer’s address, phone in hand, navigating simply by following an app. Some might even hold multiple devices, a sight common in Ubers where drivers often have their work phone propped up next to their personal phone. Yet, absurdity plays a hidden role in our relationships with technology. Why do we not question artificial intelligence-assisted navigation that has replaced both a physical map and our need to think? Why do we put so much of our identities and experiences into a device that we need to differentiate between phones for work and for play?

Just off of Union Square in one of the unused commercial properties that the non-profit Chashama has transformed into an exhibition space, artist Barak Chamo considers these questions in the thought-provoking exhibition Everything and Nothing at All. Using objects from his residency at Materials for the Arts, Chamo explores our reliance on technology and how our virtual activities have come to take the place of our physical, real-world selves.

Welcoming the visitor to the show is a different kind of delivery worker, Spirit of the Times (2022); the sculpture features a mannequin on a bike equipped with a Grubhub bag. The mannequin has VR goggles covering its eyes and six arms, each holding a phone with various apps and websites open, including Tinder, Instagram, and Google. Spirit of the Times is a portrait of the modern condition: defined by and relying upon technologies that determine our activities, which turns we take, who we see and interact with. Inherent in this reliance is the increasing fragmentation of our senses of self. While one hand holds the device that tells the driver where to go, another shows the latest news, and yet another connects him to other singles in the area. The apps’ activities do not overlap, resulting in compartmentalization of our different lives.

Chamo brings this concept to a personal level in the self portrait Working from Home (2022). Each “self” is represented on a separate screen with an image of the artist layered in the center. He is surrounded by differentiated virtual personas: a work self, social self, consumer self. Chamo explained, “We rapidly context-switch and adjust our demeanor as we hop from one Zoom call to the next. Our interactions seem more like a sequence of narrowly orchestrated performances…In this virtualized ‘New Normal’, the rules of engagement are demarcated in code, each system demanding from us a different persona, a fragment of ourselves that fits its narrative and business model.”

As we continue to fit the different molds determined by each device and platform, we are also increasingly limited by the perspectives of the digital spheres themselves. An algorithm decides the potential matches we are shown; our choice of newspaper controls the bias of the information we are fed. Chamo explores this idea in Split Screen (2021), a work with four LCD displays arranged in a grid, in front of which hang pieces of optic film. Partly visible clips of news media appear on the film fragments, giving the viewer small bits of information. As visual cues flash by, it is tempting to parse meaning and feel a sense of understanding, even ownership, of the news being told. A parallel to how we consume media in general, Chamo’s work is an apt representation of the limited information we receive depending on the network we watch.

Reflecting on these works, it is hard not to think about the dozens of functioning devices used to make them. Sourced during his residency at Materials for the Arts from September 2021 to January just before the start of the show, the objects were all donated for use in creative practices. While the city program saves these items from entering landfills, the fact that they are discarded in the first place underscores the rampant over-consumption of modern society, as well as our obsession with the latest technologies and buying new devices to constantly replace old ones even when they are still functioning.

Pointing to the pervasiveness of over-consumption is Fully Automated Icon Economy (2022), a machine made from a barcode scanner, receipt printer, fake game money, and hundreds of copies of the Museum of Modern Art’s highlights catalog. On the cover of the MoMA books is an image of one of Andy Warhol’s Campbell’s soup cans, which sparked Chamo’s interest in the idea of iconic images in artistic and consumeristic contexts. As Warhol transformed the soup can, an icon of consumerism, into art, it achieved cultural significance. The image became an icon of Pop Art, “so much so that MoMA chose it to highlight and represent its catalog of 350 most notable works in its collection,” as Chamo noted, which in turn transformed the image back into a commercial icon.

Thinking of this cycle, Chamo’s machine moves the MoMA catalogs continuously on conveyor belts. Each book’s barcode is read as it passes by the scanner, which prints another image of the soup can. “This process is both autonomous and endless, as evident by the long trail of thermal receipt paper which covers the floor. Consuming one version of the icon triggers the generation of the next and, in the process, liberates it from the need for human intervention – a fully automated icon machine,” Chamo explained. The machine relies solely on technology to produce an iconic image; the human mind is no longer needed.

Reflecting on Chamo’s show raises the question of where this leaves our own identities. “In this always-on, codified social arena, what remains of our connections, communities, and indeed our very selves?” He asks. “In the wake of endless screens, streams, and feeds, we are left feeling at once overconnected and alienated more than ever before. We have become an incongruous collection of fragments in which a coherent sense of self is hard to discern, a whole that does not add up from the sum of its parts.”

Catalyzed by our reliance on technology because of the pandemic, there is no delineation between our virtual selves and our physical selves. We are our Instagram handles, Zoom pictures, UberEats orders, and follower counts. A machine can replicate preferences, recreate experiences, and determine what information we are given. Ultimately, Everything and Nothing at All asks us whether our virtual selves have finally come to take the place of our physical presence.

Everything and Nothing at All is on view at Chashama, 7 East 14th Street, near Union Square through February 20th.