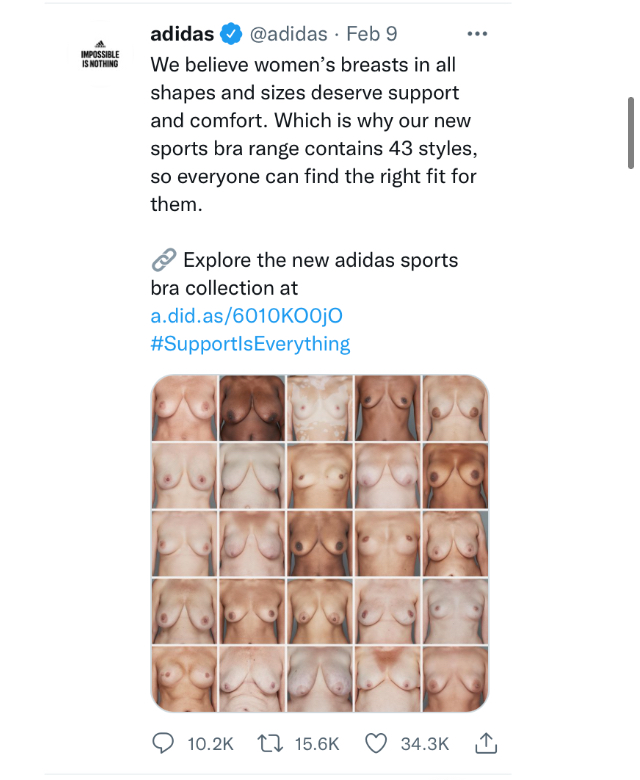 In 2012, “Free The Nipple” was started by actress Lina Esco, and touted by celebrities like Rihanna, Chrissy Tiegan, Miley Cyrus, and Madonna. In 2019 “Free the Nipple Fort Collins” filed a federal lawsuit and won, effectively giving women the right to go topless in 6 US states. Yet despite this legal victory, nudity remains a contentious issue on social media; while nudity is permitted on Twitter, Instagram’s stringent “Adult Nudity and Sexual Activity” guidelines have been criticized for censoring artists and waging a “war on sex workers.” The female nipple is explicitly prohibited under this section of the guidelines, creating a circumstance in which female-presenting bodies are twice as likely to be censored.

Adidas is the latest victim of these restrictive guidelines. On February 9th, Adidas hit the ground running (sans sports bra) with their provocative #SupportIsEverything campaign, featuring photographs by artist Sophie Ebrard of 25 pairs of bare breasts. Ebrard is no stranger to nudity, having photographed the collection “It’s Just Love,” which aims to represent love and humanity within the porn industry. While Adidas posted blurred images to Instagram, they showcased uncensored images on Twitter and a billboard at their headquarters in Herzogenaurach, Germany. What happened next was predictable: news outlets eagerly reported on the campaign’s subsequent controversy, juxtaposing skeptical Twitter comments with Adidas’ body-positive message.

While some articles focused on the morality of exposing viewers to nudity, others questioned if the campaign was created in good-faith, or if it co-opted the body-positive wave for commercial gain, exploiting nudity for shock value. Numerous body-equality activists celebrated and sparred over the campaign on social media. Regardless of one’s opinion, the campaign was indisputably successful at garnering publicity in what Guardian journalist Arwa Mahdawi deemed a strategy designed to “get people talking.”

Days later, the controversial image all but disappeared from social media. While the original post was shared and liked over 100,000 times across platforms, the original barely appears in searches, with only a smattering of photos of the billboard coming up under the #SupportIsEverything hashtag. There have not been reports of widespread deletion of reposts—as happened with the Almodovar poster featuring a lactating nipple last year—suggesting that the social media giant is actively suppressing the reach of reposts of the Adidas campaign and its hashtag.

The disappearance of the viral post comes much to the dismay of body-equality activists who finally saw their fight take center-stage, only to be left feeling used and unacknowledged. The image that Adidas used is familiar to body-equality activists on social media, who have seen many strikingly identical images used for advocacy. Despite a sneaking sensation that Adidas could be co-opting the work of activists who have long been fighting against stigma and biased social media guidelines, many activists chose to cheer the company on. Most notably, creator of @Boobs4Prevention, Sylvia Kouveli, who noted the similarities between her photography and the Adidas campaign, expressed her conflicted support for the project: “The best way to celebrate the diversity of women’s chests is just like this – I know, ’cause I’ve been doing it a while now … but at the same time, I can’t help but feel a thorn in my side when I see the similarity of my non-for-profit project in a multi-billion dollar company’s ad campaign.” 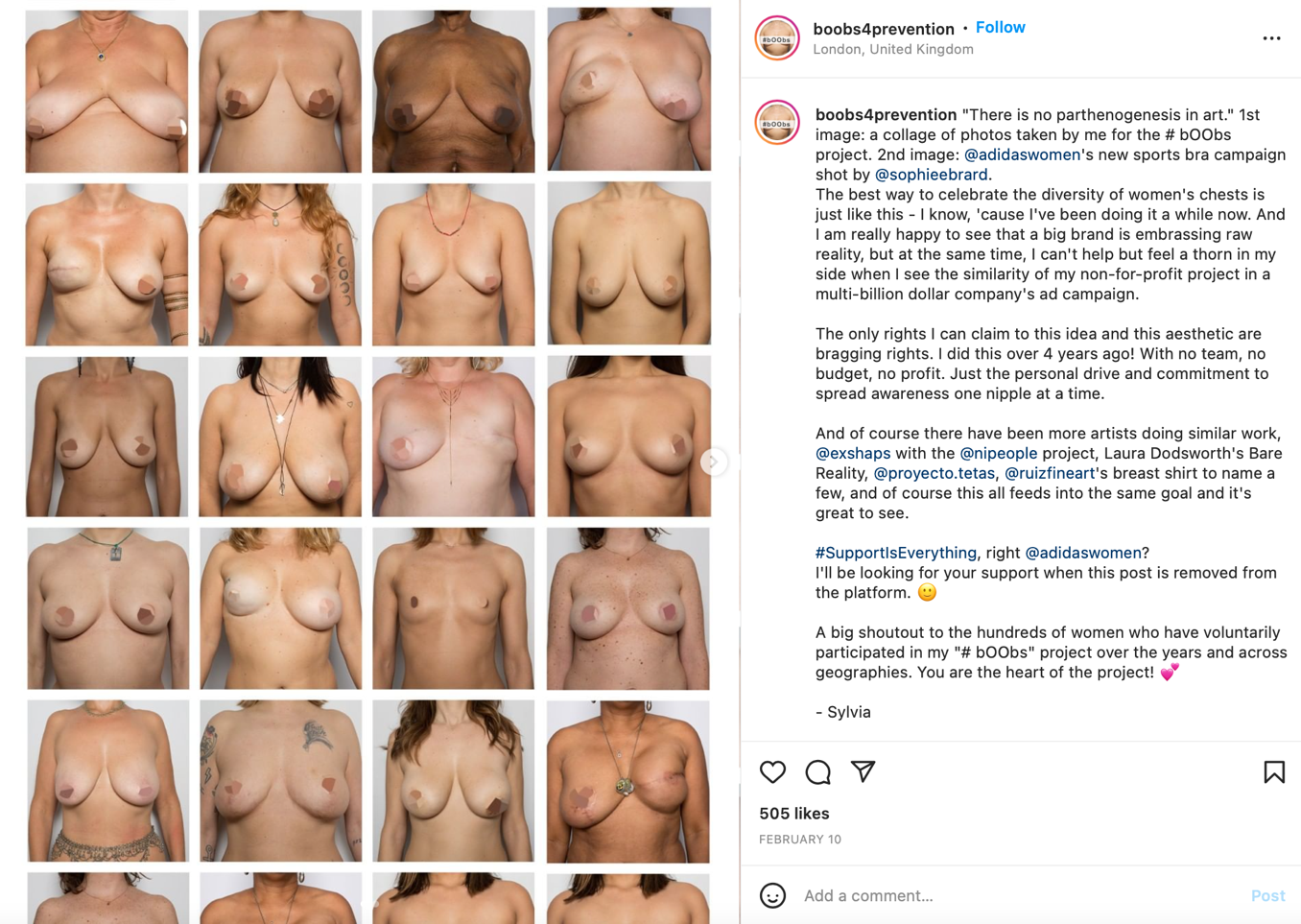 Adidas would have done well to acknowledge the campaign’s roots and artistic inspiration; activists who risk their accounts and projects by directly confronting societal stigma and social media rules should be hailed for paving the way for the Adidas campaign. Yet while Adidas may have ridden the coattails of activists like Kouveli, their work has the potential to deeply affect the future of body-equality. Pop culture’s embrace of movements can have long-lasting effects, which is why many body-equality activists welcomed the campaign. In 1934 Clark Gable appeared shirtless in the movie It Happened One Night, prompting protests which eventually resulted in New York City changing its laws to allow men to go topless.

Social media’s shaming of the female-presenting body, especially breasts, has far-reaching implications. Not only does it limit content for and about women and female-presenting people and perpetuate sexualization of the female-presenting body, it also actively intrudes on long-held feminist traditions. In Europe, where sunbathing topless became popular and common in the 1960s, a decline appears to have a direct correlation with rising sexualization of breasts, and the omnipresent threat of an image posted on social media. Women report feeling uncomfortable not because of body shaming or health risks, but because of increased sexualization of their breasts and sexual harassment. It appears possible that Instagram’s puritan-American view of the female body has been exported along with their enormous social influence. 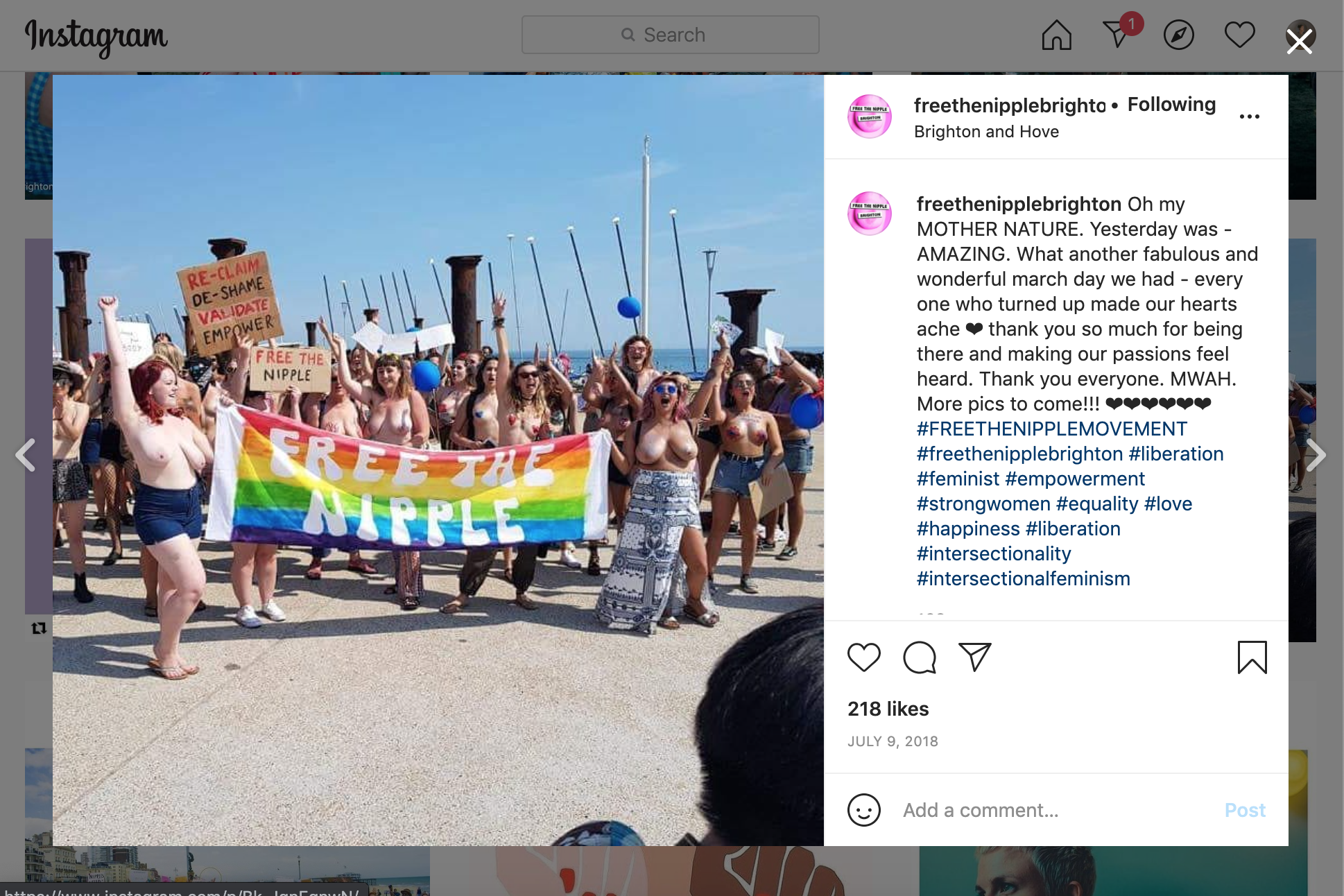 Now is not the time for us to accept the silence that comes with social media suppression and our short attention spans. There is an unfinished conversation that was started, and we owe it to ourselves to keep running with it, regardless of whether we’re wearing an Adidas sports bra. 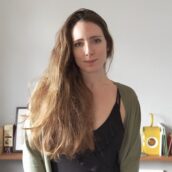 Writer, Cultbytes Emma Shapiro is an American visual artist and body-equality activist based in Valencia, Spain. She is a creator of the international Exposure Therapy project, and is a co-curator for the Don't Delete Art Campaign. She has written for Hyperallergic, The Art Newspaper, and various international outlets. l igram l igram l