Etel Adnan, Mountain No. 2 (2014), watercolor on paper. The gentile pastels against the inky black are a breath of fresh air, only subtly figured against the rough black strokes. Artwork images via Paddle8

The Alwan Art Auction began on June 16th and will run through June 30th. The organization has partnered with Shirin Gallery at 511 West 25th Street, which will have a coinciding reception next Thursday, June 26th from 5-9pm in Chelsea. Additional supporters include AKArt Advisory, and The Committee. Ultimately the showcase is exciting, enriching, and ongoing! Check it out while you can!

Alwan’s mission is to introduce both established and new collectors to a wide array of Middle Eastern artists, and this showcase includes 30 of Iranian, Syrian, Egyptian, Lebanese, and Palestinian heritage among others.

The curatorial sampling successfully juxtaposes the ever-present pairing of culturally entrenched violence with a sense of hope expressed through aesthetic tranquility. Although much of the work incorporates weaponry, such as Jaishri Abichandri’s Two Bombers circling a white-clad hijabi with nails, and Katayoun Vaziri’s Goya in 2013, the works are offset by the more serene and generally expressive paintings of Etel Adnan.

A particularly highlighted artist in the showcase is the Egyptian Ganzeer (which means “chain” in Arabic). As a street artist, Ganzeer gained recognition internationally after the 2011 revolution in Cairo. The work deals thematically with anti-military calls to civic and social justice, and has since been featured in Bidoun, The Huffington Post, Al-Monitor.com, and Arteas. Currently based in New York however anonymously, Ganzeer is recorded as one of Egypt’s highest-selling living artists. All this gender-evasiveness leads me to think Ganzeer is probably a woman 😉

When the lovely Negin Sharifzadeh asked me to look into Alwan for the Arts’s online auction at Paddle8, I was more than happy to oblige. The recommendation of this Iranian artist (featured in the showcase), curator, and animator with great taste, trademark blue hair and a kind soul should not be overlooked. 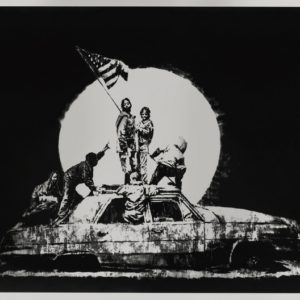