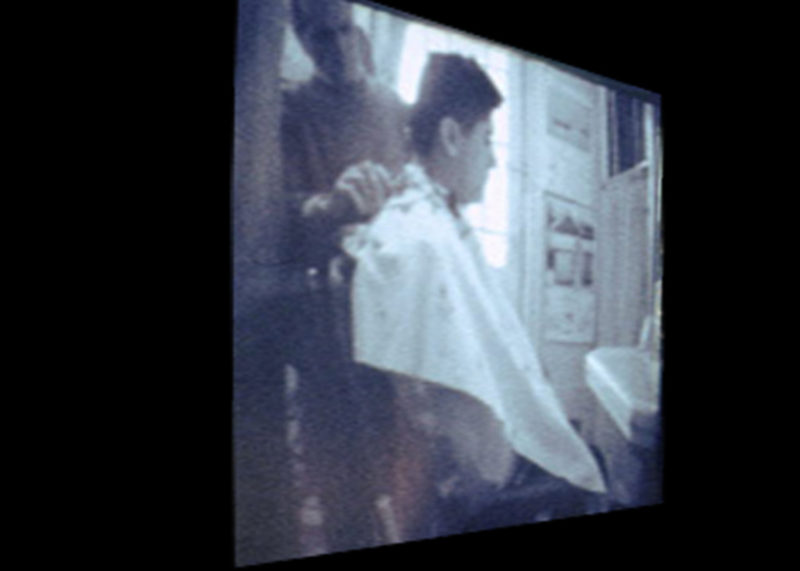 We all know that we live in a world of lies. When former insurance fraud criminals Jack and Leigh Ruby turn their practice into art after 13 years in jail, they remind us how easily our realities are turned into a fiction, in which turns of events lie beyond our grasp. But their message might have been ignored by art crowds when they recently staged what they called a “surveillance theater piece” on the 22nd floor of the former Conde Nast building at Times Square.

As its title suggests, Jack & Leigh Ruby’s Barbershop appeared to be another interactive installation at SPRING/BREAK Art Show 2017, catering to the trend of audience participation by providing $30 haircuts. But the barbershop was just a “subterfuge”, said its curators/fellow artists, Eve Sussman and Simon Lee. What was hidden behind the shop was a control room surveilling Times Square. 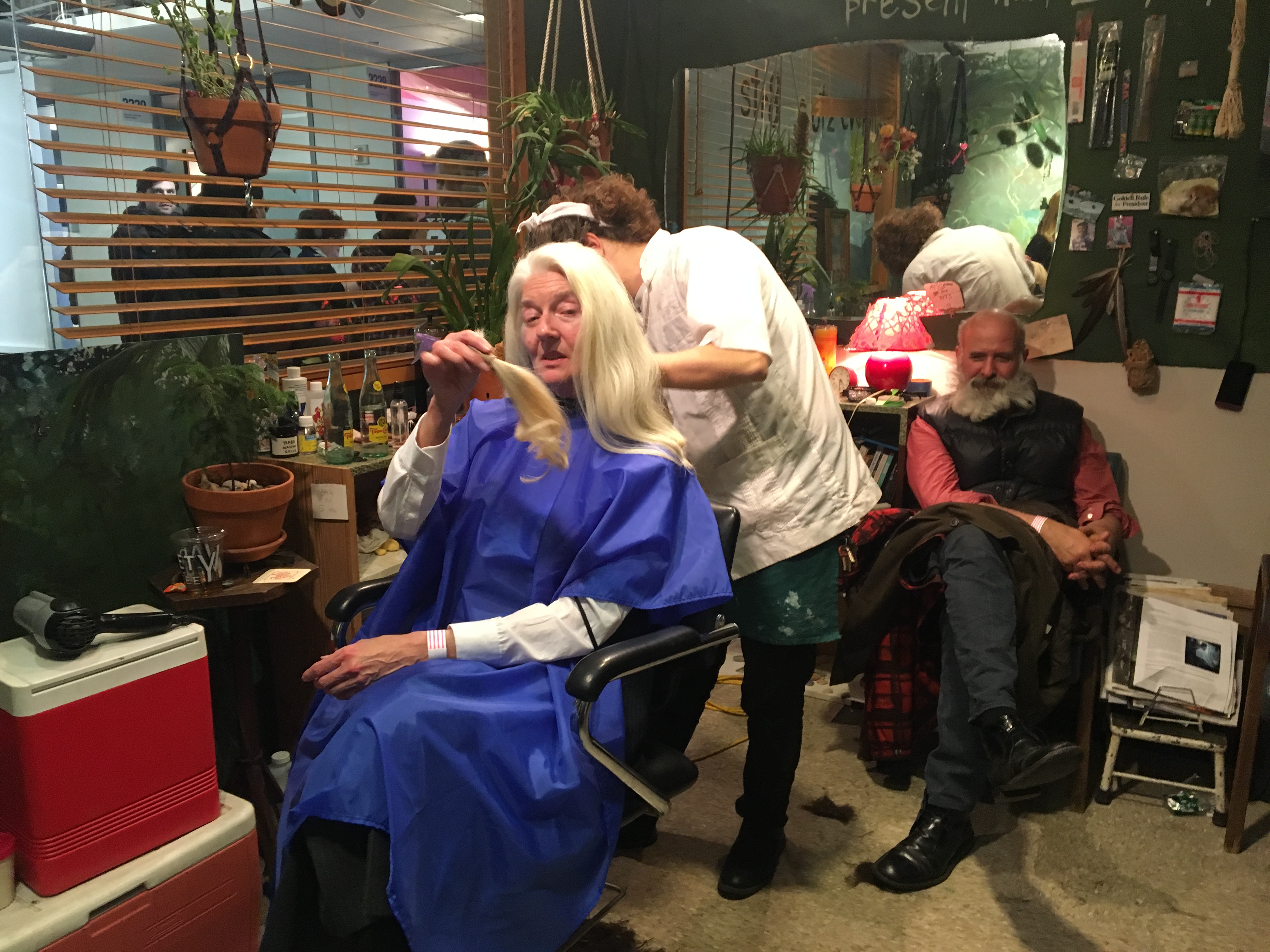 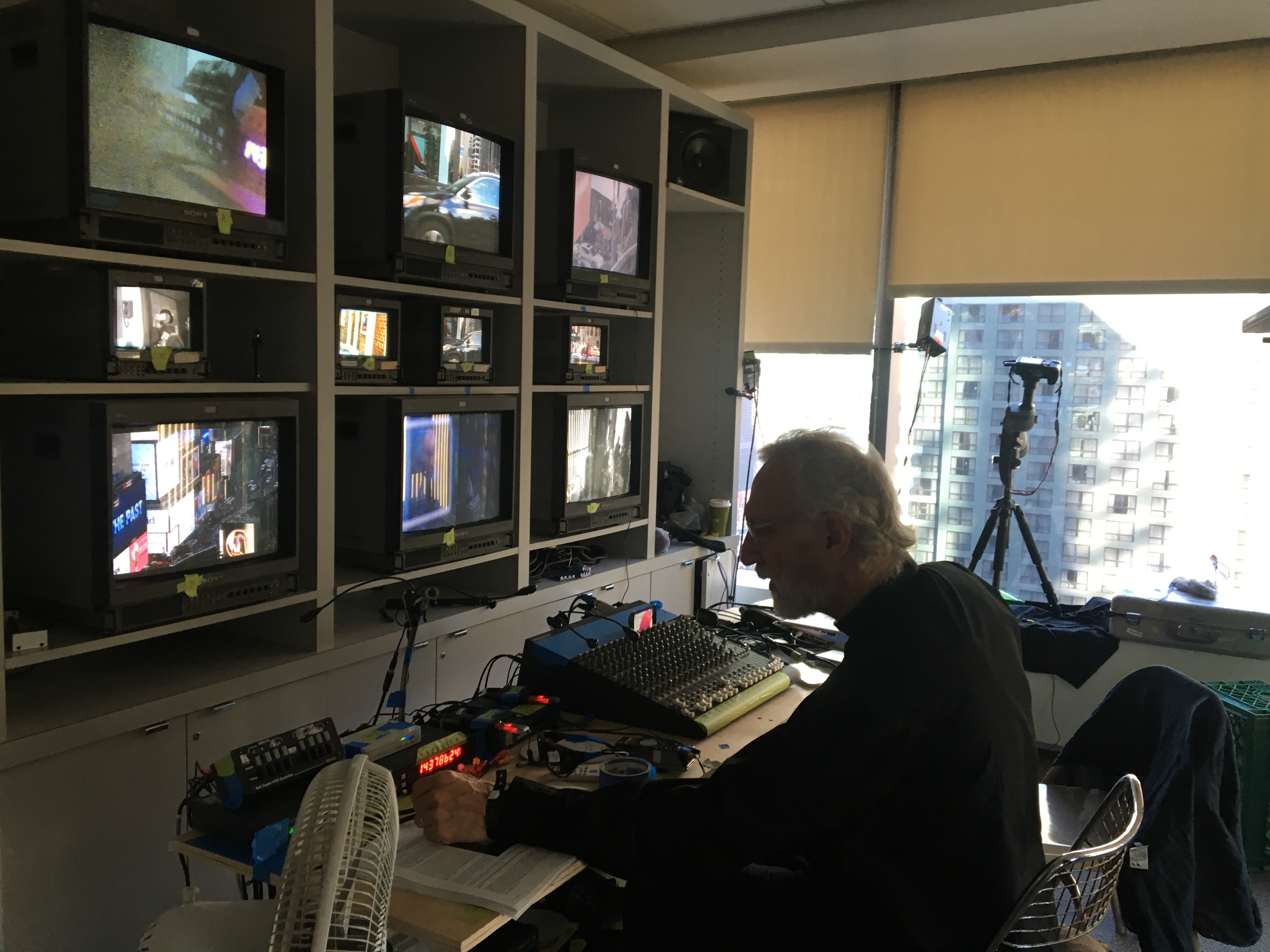 Inside the room, an “agent” was monitoring a video editing and sound mixing station. Ten video monitors were stacked up, streaming aerial views of Times Square captured by a bunch of cameras mounted against windows, or showing candid scenes from the street. Anonymous actors walked around Times Square, pretending to chat on their phones and secretly collecting footage from cameras on the back of their cell phones. The sound we heard was a mix of the actors’ dialogues and youtube sound tracks of “public liars”, according to Simon.

Surveillance has been a profound subject for many artists who also act as political activists, ranging from Laura Poitras to Trevor Paglen. But what is at the core of Barbershop is probably not surveilling but disguising, and the potential, if not intention, of being overlooked. The artists set up a public interactive piece that covers an act of surveillance among its own target. It is no doubt a reference to post-Snowden politics. Artists, frauds, criminals, police, and politicians, among other roles in contemporary society, become not unlike each other. Barbershop fabricates a fictional reality that reveals a hard truth: someone is invading your privacy and hiding behind a sophisticated public facade.

The Rubys’ ability to camouflage stems from a set of real-life skills that they relied on as con artists from the early 70s to the late 90s. The sibling duo used to fabricate videos, photographs, and documents as false evidence to perpetrate insurance fraud in America and Australia. Arrested in 1998, the Ruby’s spent over a decade in prison, where they met fellow artists Eve Sussman and Simon Lee. Today, they continue to, in Simon’s words, “live a life of fraud in the art world,” entangling what is reality and what is fiction through image production and operation.

At the very least we confused the truth to the point that alternative narratives could be suggested and adopted as believable. — Jack & Leigh Ruby

Attuned to the parallel between artist and con-artist, Eve and Simon decided to facilitate the Ruby’s to create a series inspired by real scams from their past life. Their debut, Car Wash Incident (2013-2015), was an enigmatic two-channel video that reenacts a falsified photograph from 1975, which was used by the Ruby’s to commit their first crime (they robbed a shop and faked evidence to help their neighbor friend to get money.) The video not only acts out the photograph but also presents two identical sets of settings, casts, sounds, dialogues, etc., to further perplex its subject. 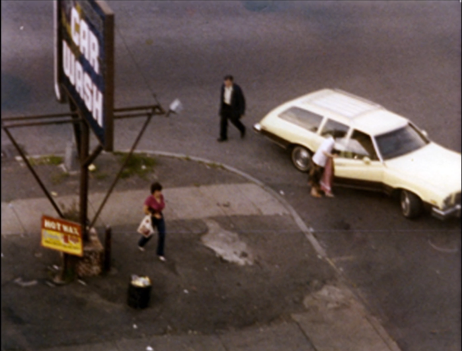 A falsified photograph used by Jack and Leigh Ruby to commit an insurance fraud in 1975. Courtesy of the artists and producers via a presentation by Eve Sussman and Simon Leeat the Academy of Fine Arts and Design of the University of Ljubljana, May 5th, 2016. 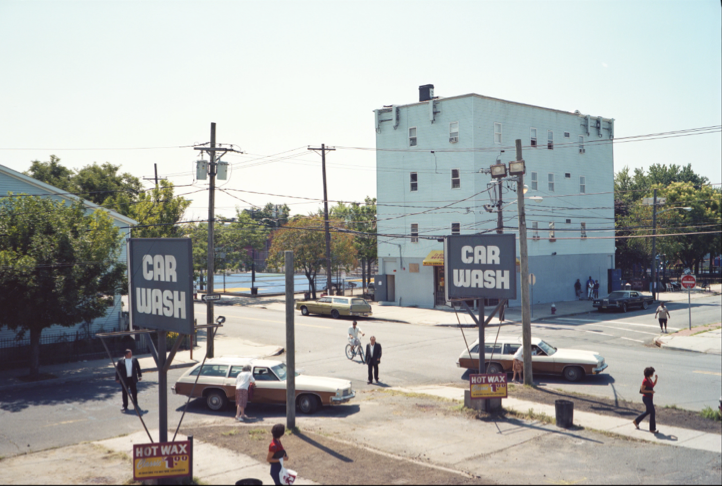 The Rubys’ works evoke a profound parallel between image-making and forgery, questioning the credibility of what we see as visual evidence, such as photography and film, in our daily experiences. As Harun Farocki demonstrated in his countless experimental documentaries and films, images — especially images generated by machines — no longer function merely to entertain but to operate in fields ranging from mass surveillance to warfare.

Even though it is a known fact that we live in a world of lies, somehow we find ourselves in denial of something obvious, even if hidden in plain-sight. In a world where we expect our online behavior to be a marketable commodity and where the NSA and CIA loom over our every move, the Ruby’s barbershop stakeout becomes a pale imitation of these elaborate veneers. It blocks our paths to the control room, where all is seen, and only those who pay enough attention not to be distracted by appearances can see through the veil. We are easily distracted by spectacles: commodifiable visual culture, media empires spouting (fake) news and politics, and the latest gadgets that allow us to post on social media with less effort than ever before to be tracked, monitored, and marketed… you name it.

“THEY KNOW WE KNOW THEY LIE. … IT’S NORMAL. WELCOME TO THE POST-TRUTH WORLD.” — HyperNormalisation

Why ignore it? Every day, more and more events elude our understanding. Many of us feel helpless, confused, and even angry. But we can’t see our enemies, so we tend to ignore the problem rather than address it. A BBC documentary HyperNormalisation (2016) explains that since the 70s, due to widespread uncertainty, reality has been replaced by a “fake world” erected and sustained by politicians, corporations, technology firms, and the rest of the population. Barbershop is a similarly constructed shelter, where everything seems to be normal and peaceful except for the threat that is underway.

Barbershop was not the only piece that reacted to the turbulent state of affairs in the U.S. and beyond. However, unlike many artists who deal with rage, trauma, and anguish under the Trump government by playing dramatic expressions that further the spectacle, the Ruby’s, together with Eve and Simon, manage to deliver a subtle yet striking message: reality is camouflaged, and you are ignoring it.

Writer, Cultbytes Mengna Da is a freelance writer, amateur artist, and sleepwalker 24/7 based in Brooklyn. Her interests involve surveillance, moving image, female body online, and politics behind what is (constructed to be) seen. With a day job as project manager/archivist at Xu Bing Studio, she also leads docent tours at New Museum. She received art historical training from Vassar College and the University of Chicago. l igram l

Past and Present: 3 Exhibitions at PinchukArtCentre, Kyiv