by Alexander A. Burganov

On the 21st of October, the Transatlantique gallery debuted Anastasia Lopoukhine in her first Parisian solo show called Dessins. The exhibition presents 30 works on paper. Dessins opened alongside the Paris + par Art Basel fair and will run through until the 10th of November, 2022.

Lopoukhine is a Franco-Russian, New York-based artist who was educated at the University of Edinburgh, Scotland, and the New York Academy of Art, USA. She creates large-scale drawings in pen, ink, and charcoal. Her approach is that of a narrator inspired by events in history or by personal experiences from different corners of the world. 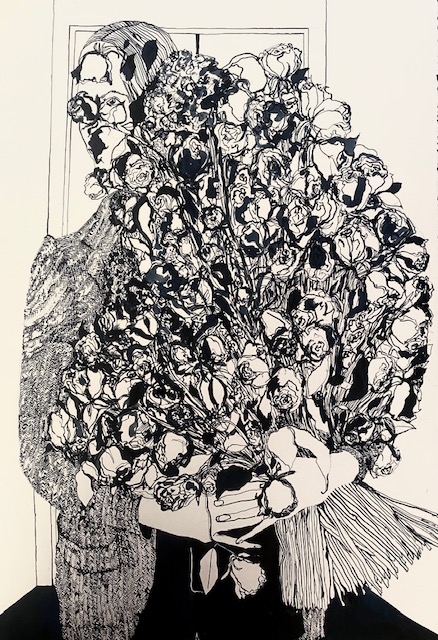 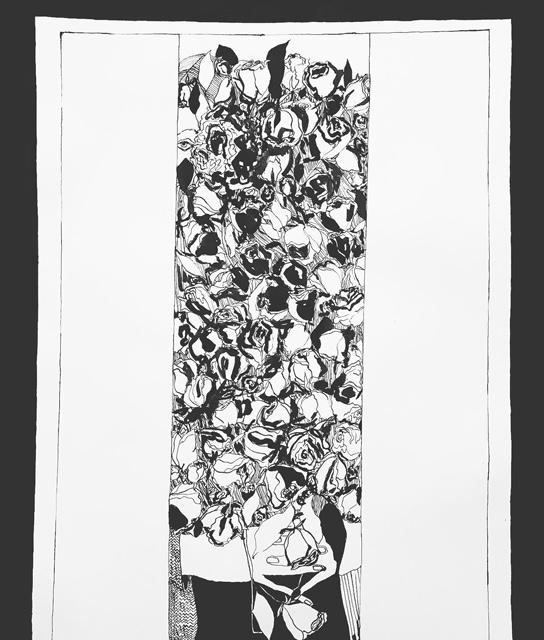 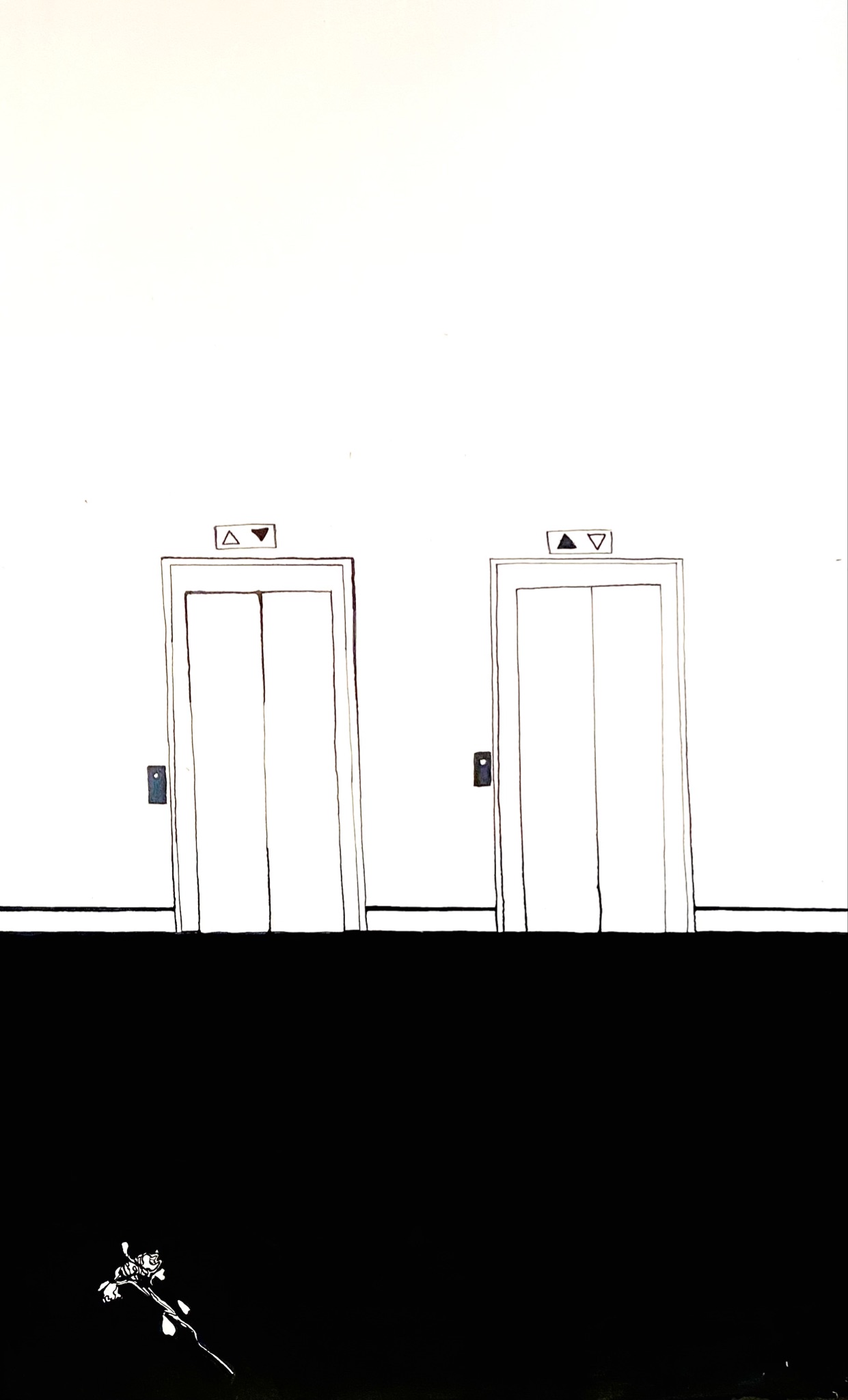 The first-floor standout work is a triptych called “Shabbat flowers.” It depicts a girl getting out of an elevator with a large bouquet leaving just a single flower behind. As the US government does not consider being a full-time artist a proper job to justify her US visa status Lopoukhine took a position performing Goya duties for a Jewish community on the Upper East Side. Every Saturday for the past year Lopoukhine operated the elevator for visitors. As a perk at the end of each work day, she was given a big bouquet of flowers as thanks for shuttling those of strict Jewish faith to the third floor and back.

The Transatlantic Gallery is an intimate two-story gallery, which is located in a historical building on Rue de Verneuil and continues the traditions of merchant art shops in Paris in the 18th and 19th centuries, presenting art, design, and interior solutions together in a chamber exhibition space. Rue de Verneuil is located opposite the Louvre and forms an integral part of the Parisian art district. The exhibition is curated by Suria Satlykova, an internationally renowned curator and art historian from the Musée d’Orsay. 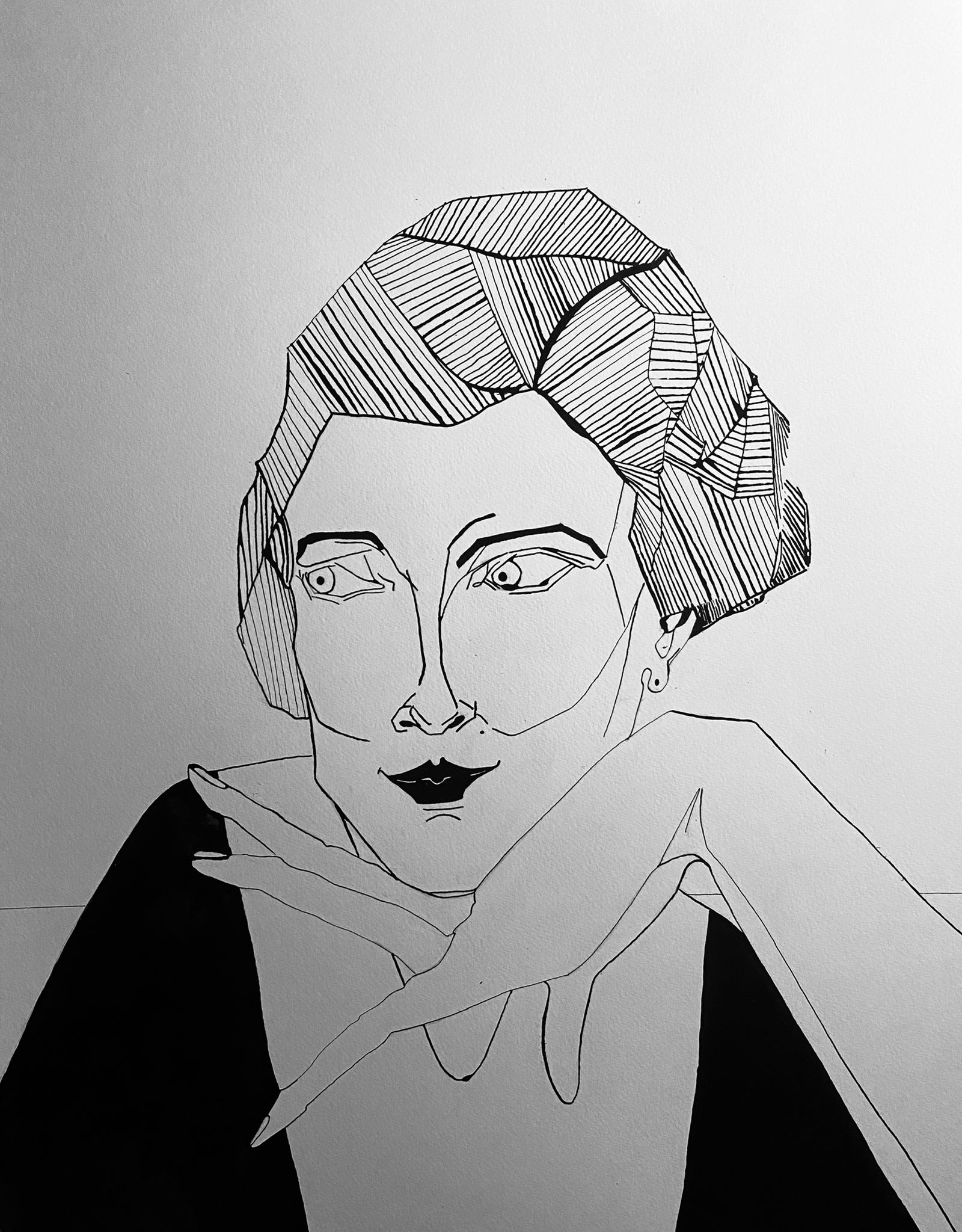 On the galleries second floor, Lopoukhine uses memory as a drawing tool. For example, in her ‘Nanny’ diptych, the real portrait of her nanny called Marina is accurately drawn in pen and ink. Whereas the other portrait is a memory of Marina which she draws by using the technique of dunking an ice cube into the ink pot and draws as long as the place of inky ice has not melted onto the paper. Both drawings are from exactly the same position and physically the act of looking at someone in real time vc vaguely remembering them in that position.

Behind the observer’s humor and a British sense of irony hide very fragile feelings and vulnerability. Dyslexic, Lopoukhine has since childhood tried to convey experiences that she cannot express in words in her drawings. She grew up in a bilingual family, moved between the cultures of France and Russia, and the UK, and had the experience of reintegration into a different environment several times in her childhood. Her difficulties in understanding and verbal communication were doubled as she shifted between cultures before fluency set in. Lopoukhine found solace in drawing from the start and has kept it going.

Dessins gives us an experience in the fight against absurdity and the suffocating feeling of otherness. The emotional center of the exhibition is the work “I Can’t”, hanging under the stone vault overhanging it, either a metaphorical self-portrait or locked in the subconscious exclamations of protest against the absurdity of the situation, which the exhibition tells about. Protest against all kinds of situations, circumstances in which a human being is required to learn certain tricks, special rituals, new languages, or perform useless actions, before other people condescendingly and haughtily agree — “Okay, okay, now we find ourselves pretending to take you as one of us for a while”. 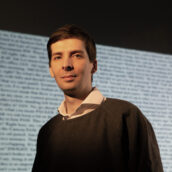