“I Wanted to Take that Trauma and Turn it into Something Positive”: NUT, a Charitable Publication 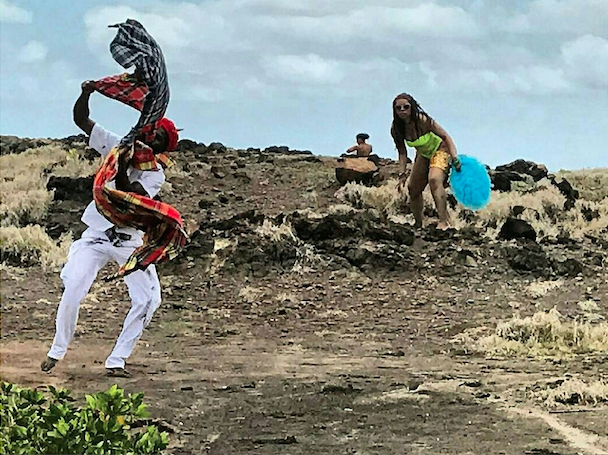 Race is a unifying marker in the United States. The term black does not only refer to African-American but also Caribbean artists of African descent. The exhibition “Caribbean: Crossroads of the World” held at The Studio Museum in Harlem, El Museo Del Barrio, and The Queens Museum which focused on artists of African descent, is an example of conceptual racial unification of Caribbean artists. Many international artists are unable to be a part of the Jamaica Biennial, where the criteria for participation is that one must be of Jamaican descent (a debated distinction in itself – is having a Jamaican grandmother enough, or must one be born on the island?). So, as a festival open to artists outside both Martinique and the Caribbean, Festival International d’art Performance (FIAP) in Martinique proved to be a particularly apt venue for Nyugen Smith and Ayana Evans, two American artists, to detangle the nuances of race and cultural appropriation. 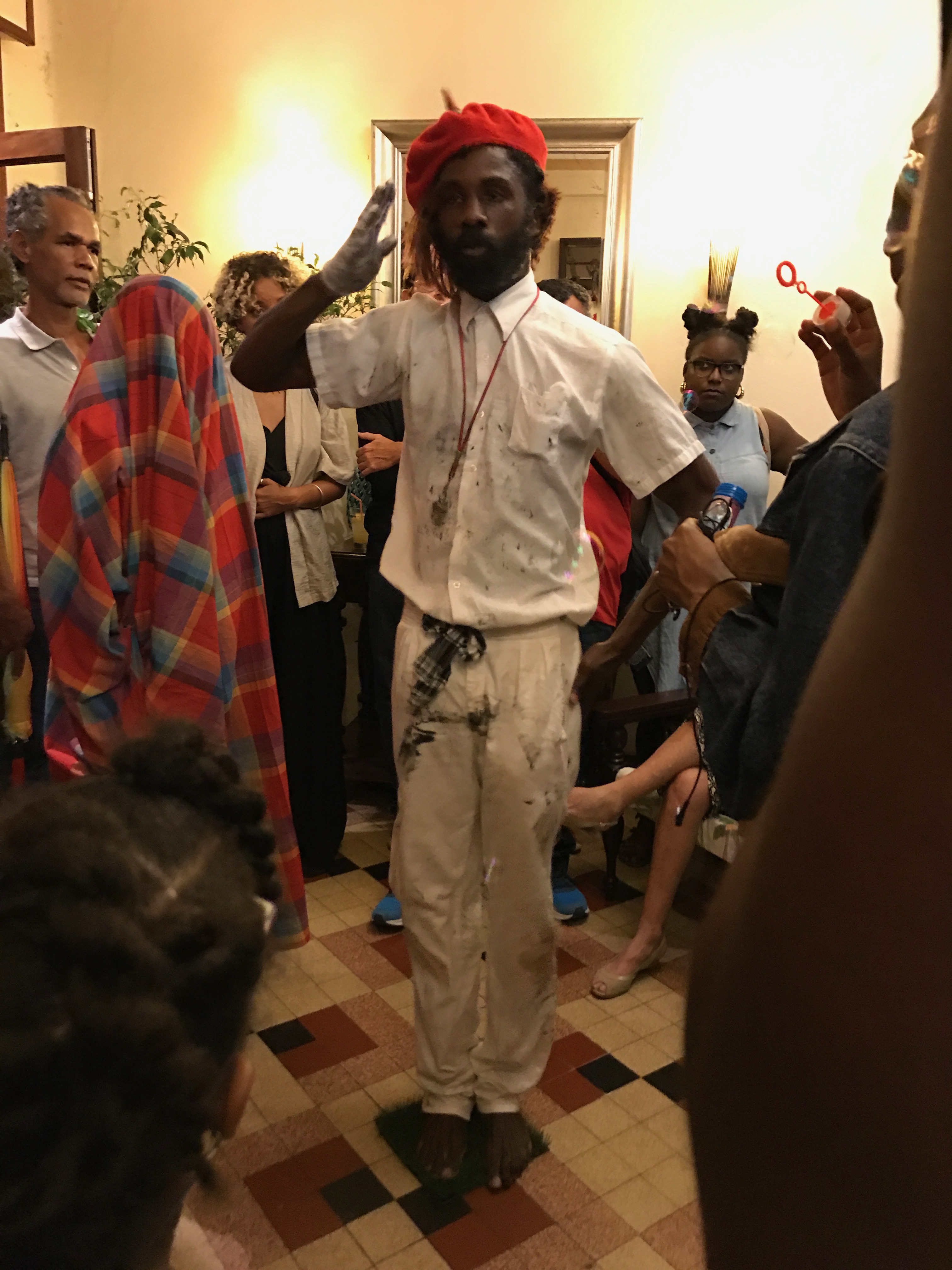 Nyugen Smith arrived in Martinique from New Jersey, where he is based, weeks before FIAP began. The Trinidadian and Haitian artist used this time to research the significance of the Madras textiles in Martiniquan culture. The colorful textile is named after its place of origin in India and has become a national dress of sorts in many former French colonies in the Caribbean. Free women and African slaves would wear costumes and tunics fashioned from the material. When slavery was abolished, the material remained and has since been used for skirts (jupes), head kerchiefs, and ribbons. Smith likens the Madras to the history of Dutch Wax, both are fabrics brought to Africa and the Caribbean where they are fully embraced as native cultural material. When I sat down with the artist at Hotel L’Imperatrice, he articulated his will to explore how the people of Martinique reclaim, remix and re-purpose the use of the Madras.

On the first night of FIAP Smith performed together with a group of local art school students who had helped him with his research. Smith himself was fashioned as a caricature of the European colonizer with his white button down shirt paired with starched pants, crooked blonde wig, and pinkie held high as he drank tea. Hector Canonge, another performance artist, held a miniature umbrella above Smith’s head, spinning it throughout the duration of the performance. Smith stared at his image in a hand held mirror while spitting at his reflection and rubbing his face in the spit as if to tell himself that he will never be that, his Eurocentric reflection. Sitting across from him was Maïmé Massol, an art school student fully covered under Madras cloth in the tradition of Egungun, connecting Creole to a West African Yoruba masquerade on spirituality and ancestral reverence. She sang a traditional Martiniquan song about a child. By using the Madras, Smith addresses how outside cultures have been imposed on the Diaspora and how the Diaspora’s response is to embrace them and give them a new life.

Smith wants the Madras to be the symbol of reclaiming consciousness, for Martiniquan’s to reclaim their roots, to be worn and wrapped like Kente cloth, to become the flag of the resistance.

Later when we had a chance to discuss the performance over Cafe Au Lait and rum, Smith said it was a piece on how as black people we reach for and uphold a Eurocentric ideal (because that is what we’ve been taught) that black people can never reach. In his words, “Eurocentrism will never accept us. And we do it at the risk of losing ourselves, our cultures, our souls. It’s like throwing your own self under the bus.” Smith asks why the Caribbean diaspora, his people, look to others on what to value as their national aesthetic. Referring to the Diaspora’s resilience, brilliance, creativity, and ability to transform things. Smith wants the Madras to be the symbol of reclaiming consciousness, for Martiniquan’s to reclaim their roots, to be worn and wrapped like Kente cloth, to become the flag of the resistance.

On the night of his performance, his resistance resonated with the crowd digesting Smith for the evening. He was not the outsider coming to present strangeness or cultural judgement in the form of performance art, which is the frequent misstep of the outsider, instead Smith became a cultural reflector hoping to align with and pay respect to the culture he was visiting via the medium of performance art. 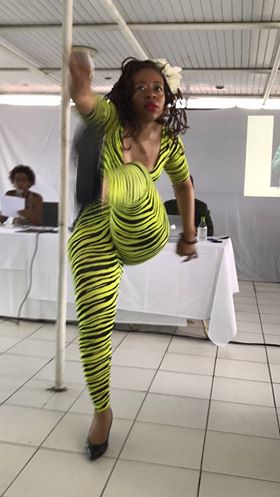 As a way to intellectualize the participating artists and performance art in general FIAP hosted formal presentations on each performance artist. Dr. Marsha Pearce, a Carribbean cultural theorist, stated that Smith’s work exposes concealed narratives, explores Spirituality and Vodun, advocates for other histories, and subverts Westernism. Early on, this was an opportunity to compare the work of each included performance artist. As Seph Rodney, from Hyperallergic, presented Evans’s work she performed a compilation of exercises from Operation Catsuits. It struck me that Evans was both object and subject as she performed while other panelists spoke about her work, she in a sense, was louder than her narrative.

…historically the main difference between us is where the slave ship dropped our ancestors off.

Like Smith, Ayana Evans has done research on Caribbean life and their arts. Supported by the 2015 Jerome Foundation Travel Grant, Evans has interviewed artists in Kingston Jamaica and artists of Caribbean descent in North America. As a descendent of the American plantation system, slavery, Evans, and many other African-Americans, cannot trace their heritage to specific African countries.

The artist that grew up in the South-side of Chicago says, “I am everything and nothing in terms of nationality within the African diaspora. There is no way for me to ever know my true country of origin or to claim a nationality with the same pride as my brothers and sisters of the Caribbean yet, historically the main difference between us is where the slave ship dropped our ancestors off.” Yet, she points out, the divisions between Black Americans and other Blacks of the Diaspora. “Most of it is due to a lack of understanding for each other, some of it is due to the divisions our colonizers implanted within our society that we have taken on.” Evans began thinking about these matters as a child, when her mother initiated a casual after school program where African-American children learnt about their African heritage.

After the systematic abuse that has lasted over centuries in America, Evans does not identify as an American in the same way as White-Americans – those who have oppressed her people. Evans disruptive artist practice and her interest in the Caribbean, the closeness she feels with the people of the area, relates to her personal history. 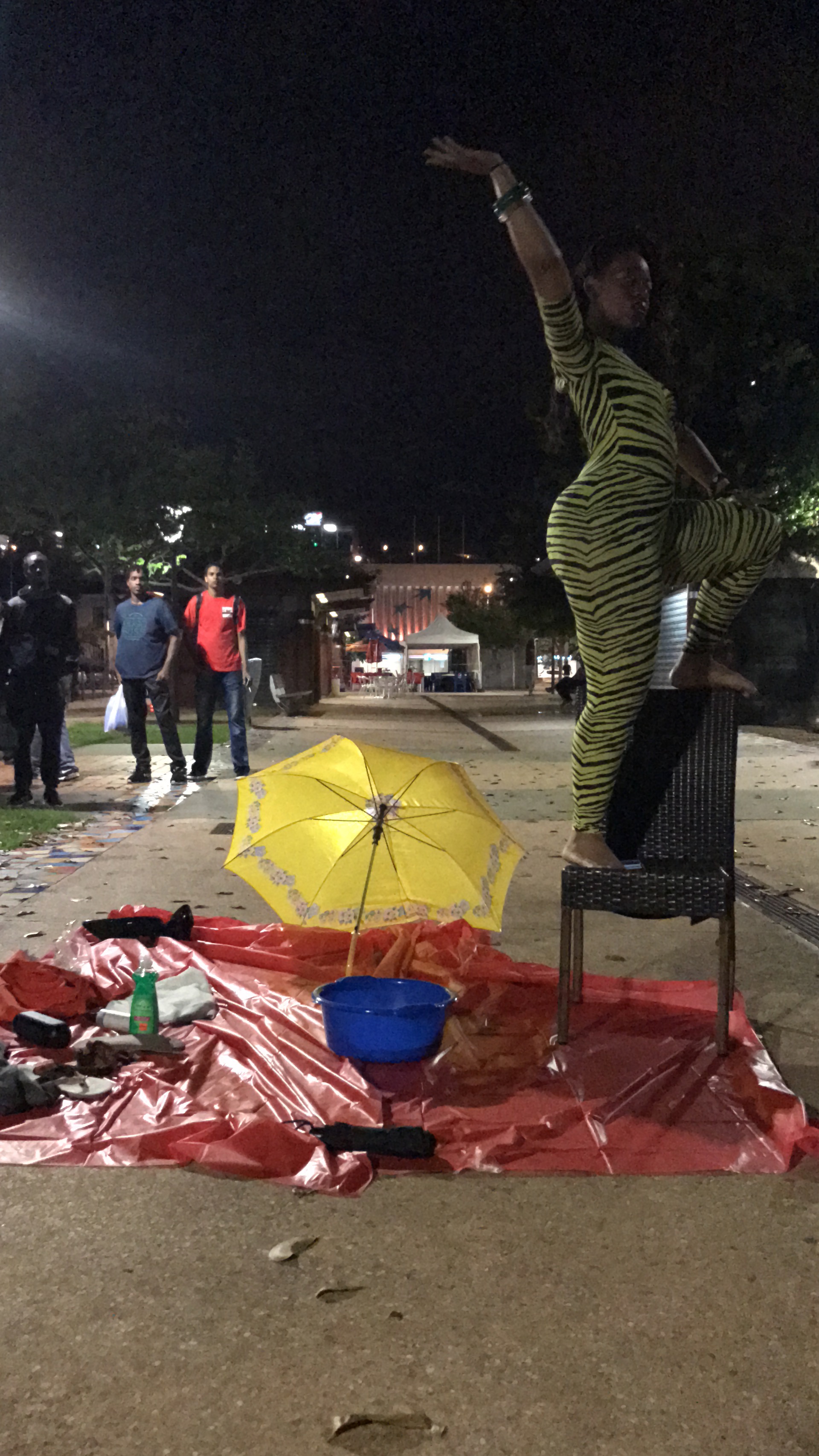 On the second night of performances, Evans began boldly, by stopping traffic. Cleverly making the domestic public, she laid out a red carpet made out of tablecloth across the street outside of Hotel L’Imperatrice that lead to a field. In the field, a large crowd of locals, artists, and hotel staff gathered. She set up her signature performance materials, a personal soundtrack and a basin filled with water and Palmolive soap. She sat down in a chair, pulled out some red nail polish and started painting her nails while making eye contact with the crowd. With a captive audience, she began to wash herself in public, which garnered screams, sounds of shock and marvel from the audience. The crowd’s bewilderment would not stop here, there was another wave of commotion when Evans held the basin above her head and proceeded to drink the soapy liquid. The piece is titled “Gurl I’ll Drink Your Bathwater” and has previously been performed at Gallery Sensei in New York and Prizm in Miami. Evans’s work focuses on the unique conflicts and hardships afforded to Black women. This piece brings a focus on femme sexualization and mythologies of the black female using bodily labor as a means of communication. 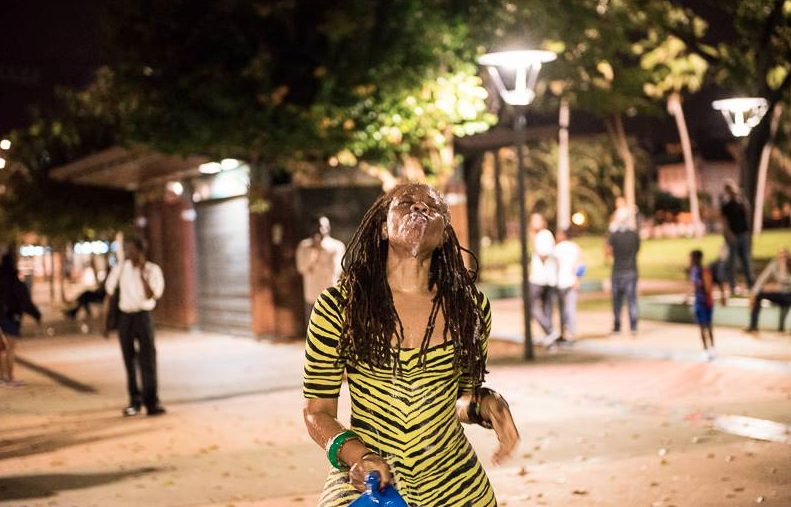 The most striking part of the evening was when Evans took off her famous catsuit and wore a t-shirt. Cat calling began and Evans singled out the men who were yelling out derogatory statements, one in particular took it way too far. Evans smacked him with her wet catsuit. The audience loved her response but was equally astonished by her boldness. Later, she stated that she intuitively sized him up and knew he would not retaliate. Reminding us that women never give up, she then laid down and rolled over on concrete for the length of a couple of blocks. The audience ran after her, sparking lively conversations that followed her until she stopped at an outdoor food stand and sat down in a chair. At this point the audience circled around her and she gracefully did a Q&A for about 15 minutes.

Audience: Do you always put yourself at risk like this?
Ayana Evans: Yes always, this is part of it. The tension.
Audience: I think it would be best if there was security.
AE: Well without security it is more accurate, like what it would like in real life for a woman. Men cat call, they do things and say things and all you’re trying to do is be yourself. You have to defend yourself without help.
Audience: Why do you do this type of art?
AE: Because it’s abstract expression and if I painted that moment, it wouldn’t hit you in the same way. You wouldn’t feel it, it’s an experience. Like the red carpet, it’s a fake red carpet but I want you to be a part of the piece. I don’t have someone to make a red carpet so I make what I can. I give you what I can. You feel it differently.
Audience: Are you making fun of the Oscars, the red carpet?
AE: A little bit.
Audience: Do you hurt yourself sometimes?
AE: Sometimes.
Audience: Why did you drink your bathwater?
AE: Because you drink the poison that’s given to you by the audience. But also to purify.

The focus on black women’s struggles, conflicts, and strength bring a universal quality to Evans work that much like Smith is based in race but stretches across the boundaries of nationalities. It is telling that both Evans and Smith bring the Black American perspective of race functioning as a unifying factor in political and cultural relationships within the African and Caribbean diaspora to their work.

In contrast to the Jamaica Biennial, that only accepts Jamaican artists, I think that we will continue to see a inclusiveness as a political statement of brother and sisterhood as the Caribbean art scene grows stronger. In turn inclusivity will allow foreign artists to understand and comment on racial issues in the Caribbean, which as evidenced by histories like Evans, touch greater parts of the African Diaspora. FIAP and the art fair MECA (Mercado Caribeño) in Puerto Rico, are two new Caribbean art events that attempt to both promote art from the Caribbean not only by lifting regional artists but also by introducing international artists, thereby bringing attention, to the region. Hopefully, allowing both subject matter and the work to extend past Caribbean boarders.

Read our interview with Annabel Guérédrat, co-founder of FIAP, here.
Read our coverage from MECA in Puerto Rico here.

Writer, Cultbytes Ethiopian-American interdisciplinary artist with an emphasis in performance and installation art that implicate the audience. Other titles she bears that also inform her art practice are mother, educator, and birthworker. Recurring themes present in Makonnen's work are identity, migration, colorism, womanhood, ritual, and kinship. In the last few years her work has centered around creative responses to the forced migratory patterns inflicted on the African Diaspora. l igram l twitter l