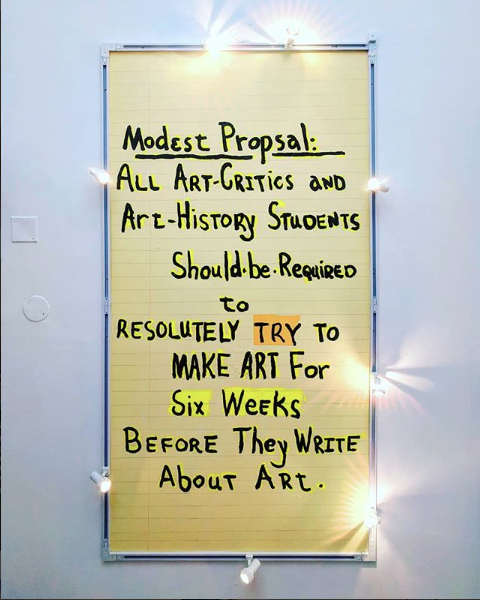 Jerry Saltz is a force in the art world that you can’t turn away from. He is best known for being a veteran art critic for New York Magazine for more time then some of us millennials have been alive. And as a failed artist, with the added bonus being married to another prolific arts writer, it suffices to say that Saltz has a lot going on. His contribution to the art world has happened in more ways than one; Saltz’s social media platform has become a space where he posts about politics (most recently, a screenshot of a tweet he posted saying “God my gender yells a lot!”), exhibitions that are not put on by the famous blue-chip galleries, and musings on what art writers and artist need to pay attention to when looking at art. His Instagram can be frustrating at times, and Saltz doesn’t hesitate to block people who disagree with what he is posting. 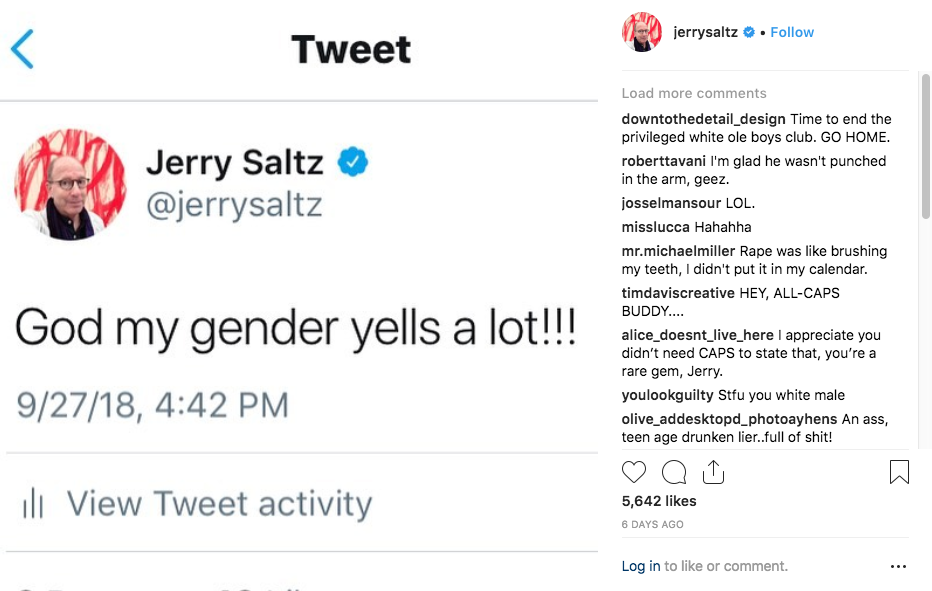 What Saltz tends to shy away from, except for a major article that he wrote for Vulture Magazine called My Life As a Failed Artist, is the fact that he had the highest hopes of making it as an artist. In this particular article, Saltz states: “I miss art terribly. I’ve never really talked about my work to anyone. In my writing, I’ve occasionally mentioned bygones times of once being an artist, usually laughingly. Whenever I think of that time, I feel stabs of regret.”

“On the outside things were great. On the inside, I was in agony, terrified, afraid of failing, anxious about what to do next and how to do it. I started not working for longer and longer periods. Hiding it. Then not hiding it. Until all I had left was calling myself an artist.”

It’s ironic what Saltz defines as a failure, considering he received a National Endowment for the Arts Grant, a review in Art Forum as well as representation by Barbara Gladstone in New York and Rhona Hoffman in Chicago. But maybe it was the absence of his confidence, the deep-rooted emotions about his mother’s suicide, or his rabid envy of other artists that made him feel like a failure rather than his actual ability to produce art. It was all happening for Saltz until he became his own worst enemy: “On the outside things were great. On the inside, I was in agony, terrified, afraid of failing, anxious about what to do next and how to do it. I started not working for longer and longer periods. Hiding it. Then not hiding it. Until all I had left was calling myself an artist.”

Hence the shock factor that ensued when Lazy Susan Gallery announced they were putting on a show dedicated to Saltz’s paintings, photographs, historical items, and of course, literary quotes which would only be open for a little under a week. For a man who seems armored and immune to people openly criticizing him on Instagram, I wondered if this was secretly akin to throwing salt into a wound. Saltz posted on his own account, but there was no sign of him on the opening night. 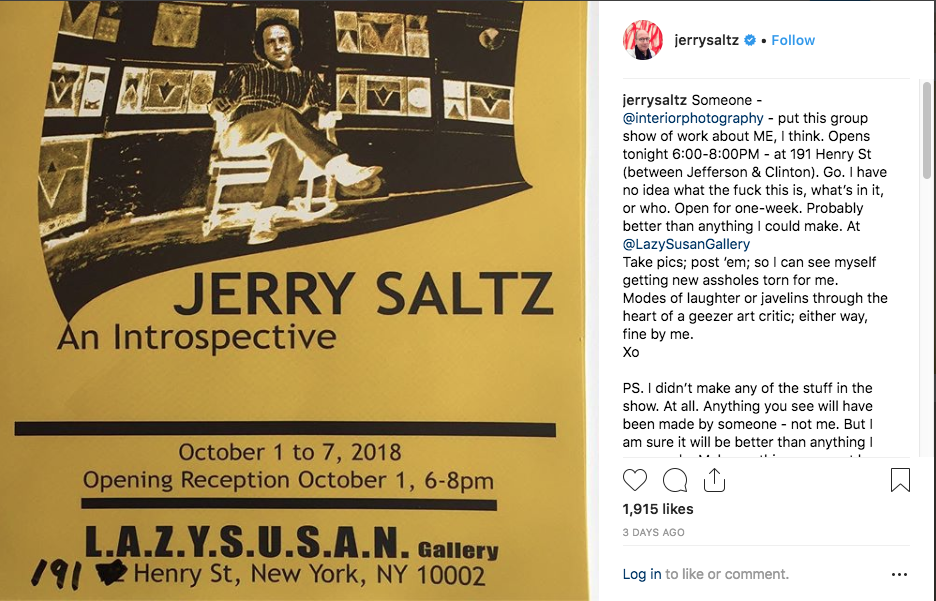 Poster for Jerry Saltz: An Introspective at Lazy Susan Gallery.

Flash forward to the opening on Monday, I was welcomed into a small, sweltering gallery filled with Jerry Saltz’s work (all for sale) which ranged from license plates (more on that later), a painting of his modest proposal on the Lazy Susan ceiling, to a medicine cabinet filled with salts for “relieve of symptoms due to Art that asSaltz the Senses.” The exhibition was funny, quirky and about as random as Saltz appears to be sometimes. Is the lesson we are supposed to take away from this exhibition that failure is what you make of it, and sometimes we aren’t our own best judge? 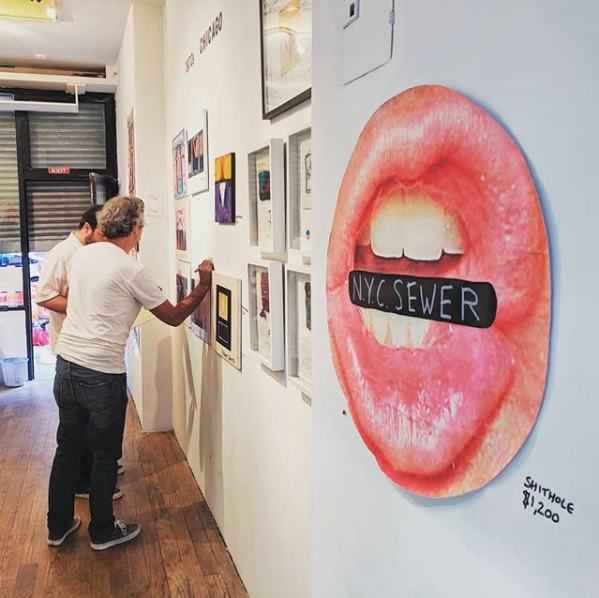 Brian Shevlin,  the owner and operator of Lazy Susan Gallery, offered the space to photographer Adrian Wilson to curate something quirky for a week. Wilson who has known  Saltz for about three years decided to shape an exhibition out of Saltz’s belief that copyright is dead. While Wilson doesn’t necessarily agree with this statement, he decided to take Saltz up on his offer to “take anything that is mine, anything.” Wilson bought things that ‘could’ have been Saltz’s off of eBay such as the license plates and asked people to copy his 1970’s paintings. The person who supplies Saltz with a lot of memes and prints the street art that he does was also heavily involved in the exhibition. 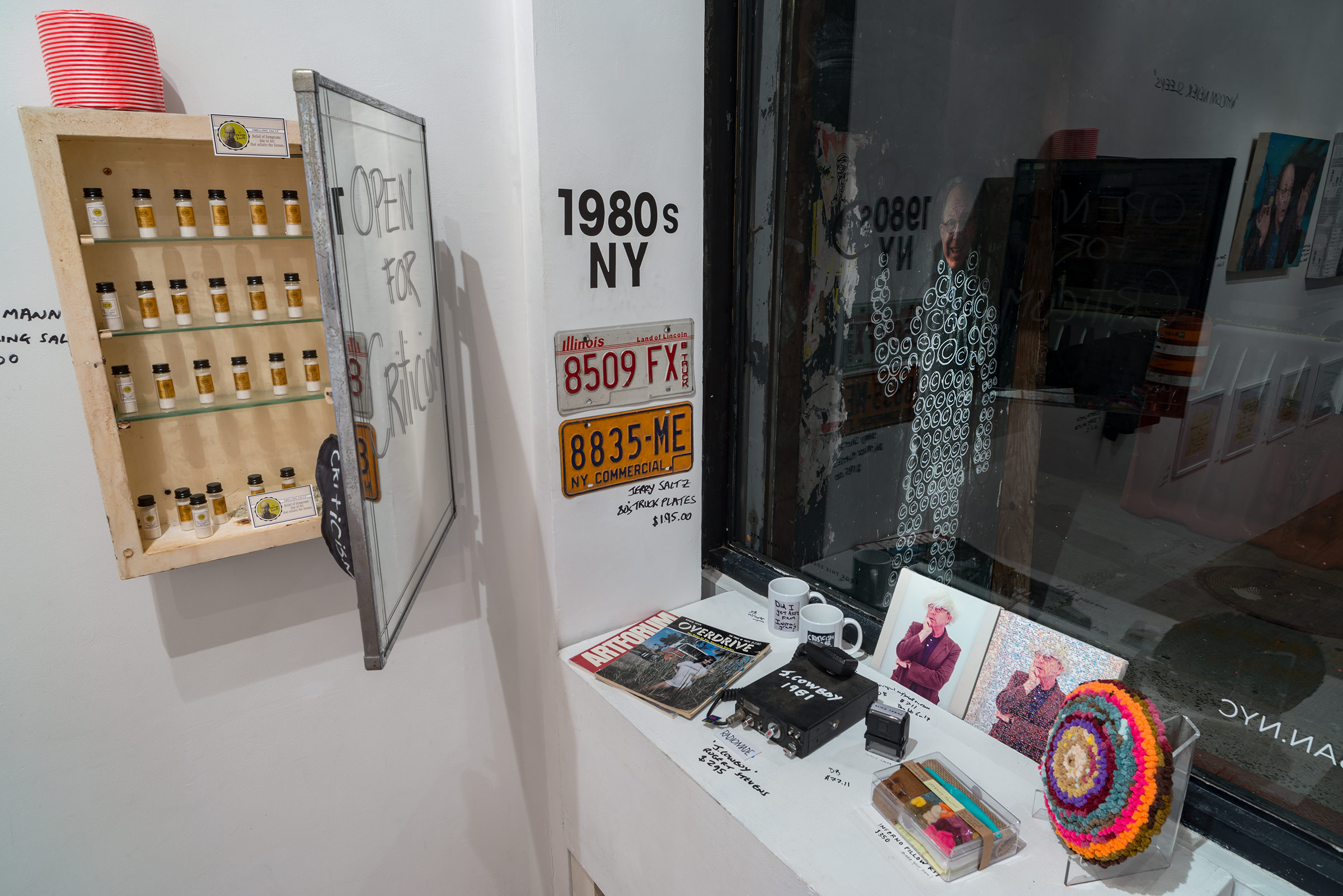 As much as the exhibition matches up with Saltz’s wacky personality, Wilson points out that the exhibition raises questions about the limits of appropriation and what is or isn’t ok based on what someone tells you. Saltz holds a lot of clout in the art world, but how far does that go when a renowned art writer tells you that copyright is dead? Wilson goes on to explain, “The point of the show was really to use humor to have a gentle dig at Jerry, not say a “screw you”. Jerry admits that 99% of artists and photographers disagree with his stance on copyright but many are too afraid to question him.” He continues, “Jerry (and his wife Roberta Smith) have an incredible amount of power in terms of elevating an artist’s work with a good review, which is why you see so many sycophantic comments on his Instagram. I told people my intention, that it was a creative way to make an important statement and that Jerry loves his fans, so he would love we all took him at his word and he finally got a NY solo show. We were being hypocritical I suppose to copy his work as a way of saying copying is wrong but it was all tongue in cheek irony – including the “Introspective” title of course. We were careful to word all the press releases etc very carefully to say it was “The history, work and ephemera of Jerry Saltz’s life” and it was his work – he just didn’t paint it.” 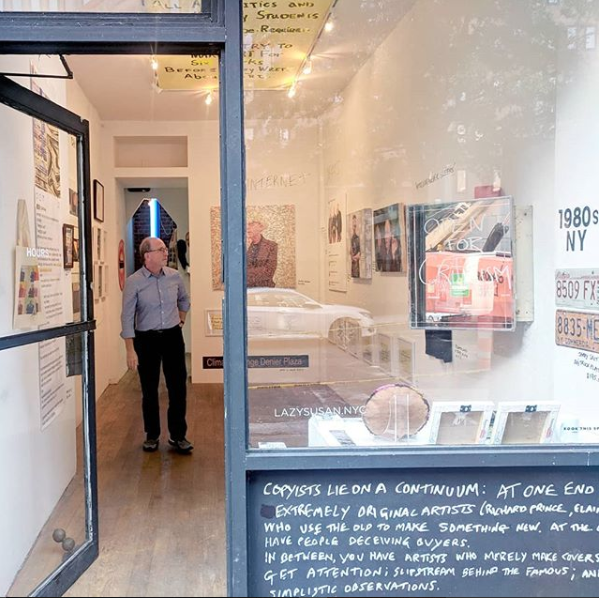 Overall, the support for the exhibition has been positive and Saltz even made a trip to the gallery this past week, confronting the pieces he painted as a young artist head on. Wilson made it clear that as much as Saltz can handle people taking jabs at his posts, this exhibition was not meant to make a mockery out of Saltz or anyone involved: “I had asked people to not include Roberta in there but Richard Prince is co-conspirator of the anti-copyright movement, so he was totally fair game. I am sure legally Jerry didn’t want his employers, New York Magazine, to be upset too and actually forwarded me an email from their fact checker asking about the show. Ultimately I think he didn’t want someone to go to the show and be upset it wasn’t his own work.  In terms of being a failed artist, the self-deprecating article he wrote about it won him a Pulitzer Prize, so I was never worried about that. In fact, the way I laid out the pieces, young failed Jerry’s paintings are facing successful and famous Jerry’s Instagram persona, and I think what those two people would think of each other is a fascinating idea.”

Rewriting Painting, A Panel Discussion at the Cooper Union, Delves Into the State of Art Criticism and Painting as a Medium