“Post-industrial digital dysmorphia,” curated by artist Carlos Franco, is the first exhibition to present Joiri Minaya and Nando Alvarez-Perez’s works in dialogue. This splendidly disorienting installation at Lydian Stater in Long Island City questions the commodification of life in the post-digital age, highlighting our difficulty in deciphering the real from the virtual.

The exhibition space is divided by a metallic grid frame that embraces, absorbing the viewer passing by. Arresting images such as Minaya’s #dominicanwomengooglesearch feature isolated body parts derived from the internet when searching “Dominican women.” These pieces counter Alvarez-Perez’s divine grid images featuring body close-ups of Greco-roman statues, iterating the myth and ideology of Western beauty standards. The close affinity between the two artists merges into one sublime and mysterious aesthetic in the digitally infinite multiple, which employs photography, collages made from archival materials, or Google searches. Through this installation that combines photography and sculpture, the exhibition explores the imagery of selflessness, disrupting and controlling the circulation of the viewer.

Minaya’s suspended pieces seem to escape from the structure, floating around, haunting, pixelated, selfless, flattened, like numeric body shells, disrupting traffic, teasing the viewer, yet reclaiming their agency by asking who these body parts belong to. This sense of anonymity in Minaya’s works profoundly resonates with the history of the indigenous colonized body reduced to a cataloged object.

“These collages appropriate artifacts and strategies that Western cultures have deployed to render their imaginaries of the other; in this case, Caribbean women of color, ” Franco comments on the work.

Minaya’s poetic approach to portraiture uses collage to investigate the female body, gender, identity, and stereotype. She reveals but leaves a hole in the picture, creating an abnormality, a glitch in which this other is perceived amidst structures of power, privilege and geopolitics. The New-York based artist works from a personal place. Having grown up in the Dominican Republic, Minaya’s work decolonizes her self-image by pulling apart and drawing attention to imposed histories and ideas prevalent in U.S. American culture.

Further contextualizing his feminist approach, among other concepts, the exhibition is accompanied by a dense essay by Franco. Anchored within philosophical thought, his critically profound essay recalls “A Thousand Plateaus: Capitalism and Schizophrenia” by Gilles Deleuze and “Glitch Feminism” by Legacy Russell.

Alvarez-Perez’s use of the grid in his numbered series, such as “031515,” references the discovery of Brunelleschi’s perspective and the prevalence of math over reality while alluding to the grid in social media user interfaces. This lens, pointed at us, records our steps, words, and most intimate thoughts and the standard to which we are held accountable. Alvarez-Perez’s graceful and moody compositions feature objects that seem abandoned, drifting in space.

Reminiscent of the still life genre and the deindustrialization in the Buffalo region, these works recall the atmosphere of a Morandi and deserted landscapes of de Chirico’s metaphysical series with pop hints such as Murakami, with an appropriately contemporary sci-fi bend. Alvarez-Perez’s practice extends into his work as a founding director of The Buffalo Institute for Contemporary Art–an art and education nonprofit with a mission to model the ways culture can sustain communities through focused, practical engagements with contemporary art. And, delving deeper into mediation, as editor-in-chief of Cornelia magazine, a visual art review published three times per year covering the Western New York and Southern Ontario region.

“Post-industrial digital dysmorphia,” is a physical manifestation of digital ideologies, allowing the viewer (or user) to experience the liminal (and hallucinogenic) dislocation of 21st-century epistemologies and ongoing technological restructuring of thought. 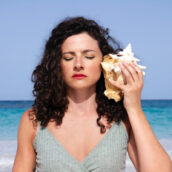 Guest Contributor, Cultbytes Bianca Abdi-Boragi is an artist and curator based in New York. Tending towards the absurd though with care and respect, her works respond to the contemporary political and social environment in the United States, France, and Algeria, engaging with themes of gender, subsistence, and migration while linking this moment to the historical repercussions of post-colonialism. Abdi-Boragi—whose videos and multi-media artwork have been widely exhibited—received her BFA from ENSAPC in Paris and her MFA from Yale School of Art. l Instagram l