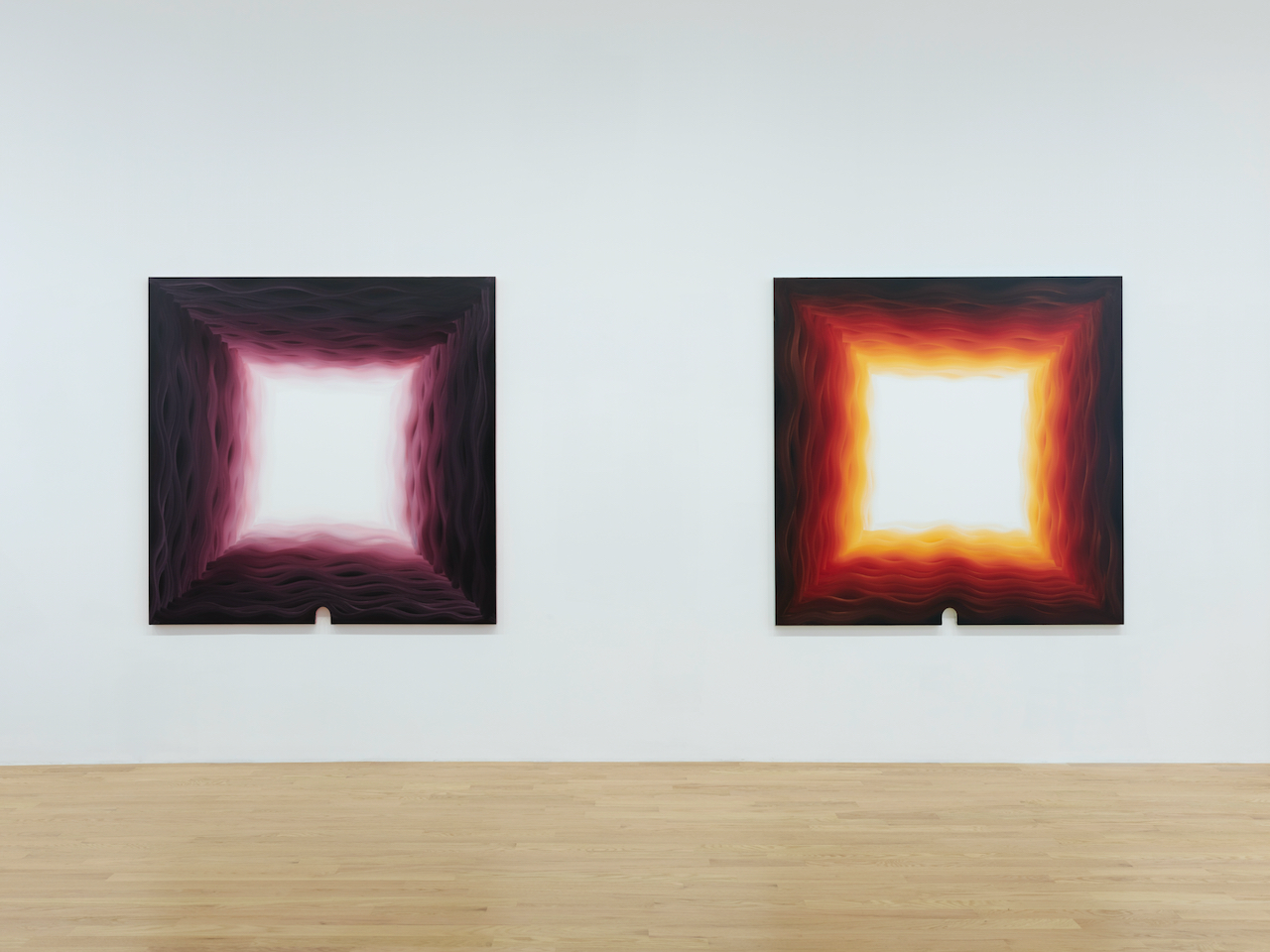 For the first time in 14 years, Karin Davie has graced New York with a solo show of wavy, abstract paintings that seem to radiate light and buzz with energy. It’s a Wavy, Wavy World at CHART in Tribeca brings together nine new paintings alongside five works on paper made over a decade ago, all of which consist of undulating lines in monochromatic gradients. Both in the exhibition title and in the content of the works, Davie references ocean waves. At the same time, a closer examination of each painting, in particular when viewed in person, reveals hints of the internal, biological currents that connect us on a physical, human level.

Davie has a remarkable ability to manipulate her materials to make the surface appear vibrating and emanating light, as if illuminated from behind. Often painting with quick, wet-on-wet brushstrokes, the artist works with confidence and control. The paintings in It’s a Wavy, Wavy World are striking. Her layers of brushtrokes become increasingly darker and appear to be pushing, pulling, and slithering–electrified in a way that defies their simplicity.

This sense of electrification and illumination is best seen in her In the Metabolic series, in which light pulsates out from the center. Starting with the darkest colors along the canvas edges and plunging into a seemingly unnaturally vibrant white square at the center, these works start to play tricks on the eye. While the optical effect is apparent in photographs, the impact in person is even more dramatic. The paint appears to be both caving in towards the center and expanding out beyond the edges of the canvas. At the same time, there is a confused sense of looking up, as if standing below a skylight, as well as looking down, as if the viewer is above a lighted tunnel. 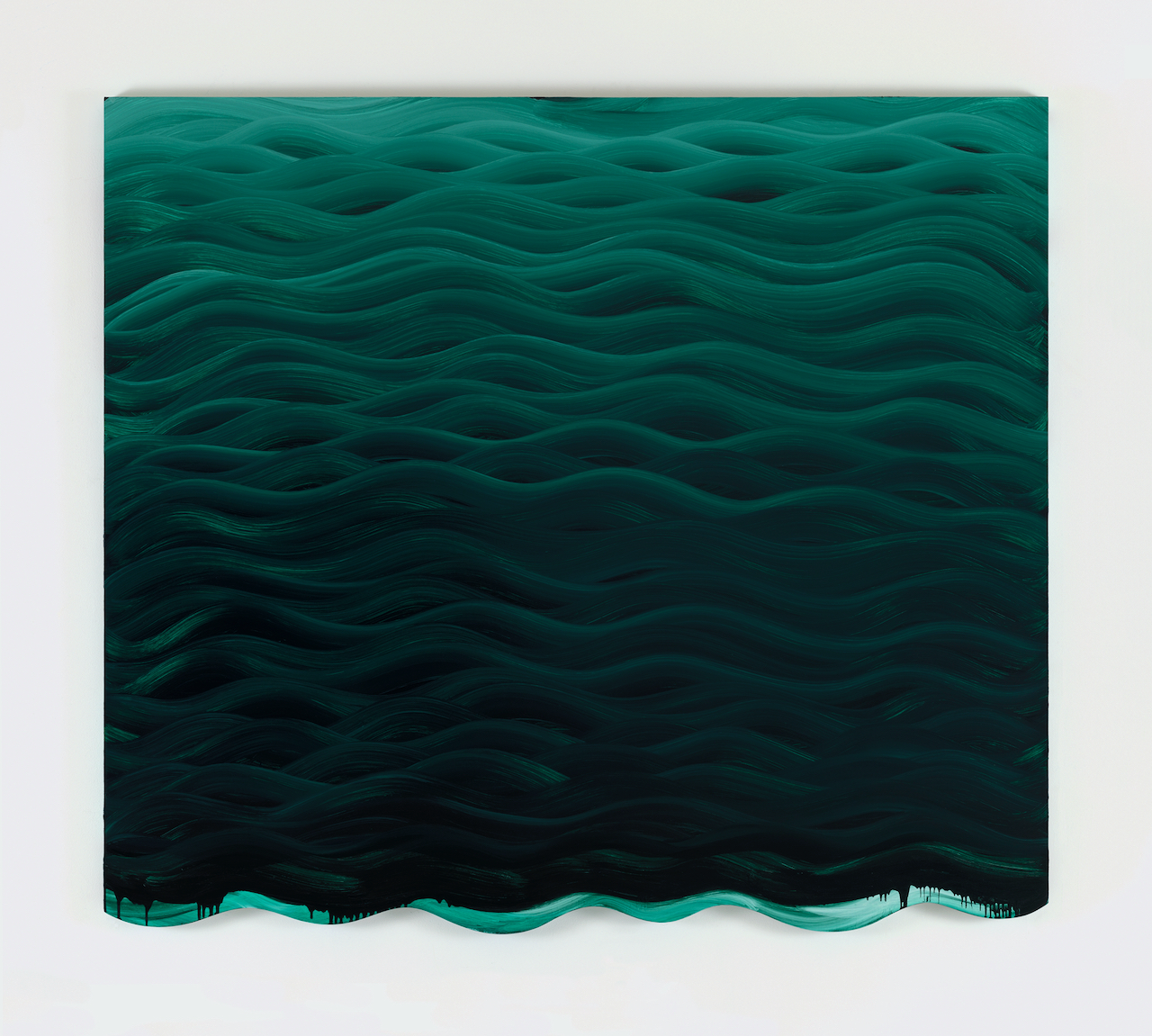 Karin Davie, While My Painting Gently Weeps no. 2, 2012, oil on linen over shaped stretcher. Courtesy of CHART and the artist. Photo by Spike Mafford.

Even in works where the entire surface is covered in paint, Davie skillfully manipulates color to let hints of light glow from between her brushstrokes. In While My Painting Gently Weeps no. 2, a rich turquoise gradient darkens as it approaches the bottom, undulating edge of the canvas. Just before plunging into complete darkness, the wall of waves meets a shining strip of bright turquoise. Drips of darker paint melt down across the light surface, adding a sense of weight and downward motion.

Waves appear to be the most direct reference in Davie’s paintings, emphasized by the exhibition title, but her works are far from representational. Indeed, the wide range of colors she uses invites the viewer to make their own associations. In Down My Spine no. 1, vertical, oscillating stripes that appear nearly black at the edges fade to yellow and end in a bright punch of white where two curvy canvases meet in the center. The vertical strokes and gradient yellow reminded me of blond hair viewed under a microscope and lit from behind.

Davie had a strong presence in the East Coast art scene in 1990’s, but since her last 2008 exhibition “Symptomania Paintings” at the Aldrich Museum of Contemporary Art in Ridgefield, Connecticut, she has shown infrequently. At that time, she reolcated to Seattle and her studio practice changed as she adapted to living with Lyme disease.

Perhaps a nod to the internal waves or currents that make up our bodies, biological undertones appear throughout the show, including in the titles, such as Side Effects and Shape of a Fever no. 1. In the latter, the artist has painted a cylinder of red, vertical brushstrokes that resemble a vein or blood cells. Painted with the darkest red at the center, the fibrous ribbons of paint seem to pile up and push out towards the viewer.

As with many of her paintings, the edges of the canvas stretched over wood take on the appearance of a wave. These undulating canvases also reference the human body as the edges symbolically give way to the shape of the artist’s legs and elbows leaning against them. A similar detail is seen in the square In the Metabolic paintings in which her enlarged thumb interrupts the bottom edge.

Seeing Davie’s paintings in person is to experience them on a completely different level. The energy, light, and physical presence of her works make the experience truly visceral. While 14 years is a long period in which to be absent, Davie’s return feels well worth the wait.

It’s a Wavy, Wavy World is on view through October 30th at CHART.