FANTASYLAND, Katya Grokhovsky’s current installation at Smack Mellon, is a sprawling environment of gigantic beach balls, hand-dyed vintage army parachutes, an abstracted carousel structure, and a custom neon sign peppered with the artist’s more well-known sculptures and performance videos. The space comes together to create a vision of U.S American theme parks, equal parts playful and grotesque, that seem uncomfortably overstuffed in their own delight of saccharine consumerism. Like much of Grokhovsky’s recent work, this exhibition takes a sardonic look at U.S American consumer culture, stemming from her own feminist roots and experiences of migration.

Rachel Vera Steinberg has worked with Grokhovsky on and off since 2015, and talks to her here about the evolution of her practice, her current exhibition, and the urgent and ongoing issues that she has addressed in her work for the past decade.

Rachel Vera Steinberg: I wanted to start by talking about the exhibition, which takes the form as a playfully psychotic carnivalesque space that you call FANTASYLAND. Embedded in the installation–quite literally strapped to your sculptures–are performance videos that you have made over the past few years. In each one you play with the conditional categories of identity that you are continually faced with, as seen in the video work Bad Woman and your upcoming performance Becoming American. How did you develop FANTASYLAND as a space, and how does it hold space for these identities?

Katya Grokhovsky: To me, FANTASYLAND signifies a construct of the U.S.A and presents an image of a decaying, grotesque, homemade theme park. A sort of saccharine, yet nightmarish, fictional, and absurd place, with a dark underbelly. Having lived here for almost eleven years and eventually migrating here, I am both disillusioned and still enchanted by America. FANTASYLAND is my distorted view of this country I now call home. I have always been fascinated by theme parks, partially because I did not grow up with them. I did not visit one until I migrated to the West. Disneyland was one of the first places I visited when I came to the U.S at 20 years of age. During my studies in Fashion Design in Australia, I traveled to Los Angeles to partake in an internship in Hollywood at a costume department in Warner Bros studio. I remember being fascinated by the excess of Disneyland, ‘The Happiest Place on Earth,’ as well as the rampant consumer and materialist show-biz culture I was experiencing in L.A and in Hollywood. Coming originally from Soviet Union, this culture of abundance was new and exciting and still resonates with me years later.

RVS: I also wanted to talk about the role that migration plays in your work. You are the founder of the Immigrant Artist Biennial and you have migrated halfway around the world multiple times in your life. As you and I have discussed, this immigrant mindset has material consequences on your practice, and as a result your work heavily utilizes materials that are transient and re-usable. Can you talk more about your relationship to physical displacement and material goods, and how that relates specifically to your experience in the United States?

KG: Migration and all it implies has been a big part of my adult life and is one of the ongoing themes I work with. I am a double immigrant, from Ukraine to Australia, Australia to the U.S and I have also lived in various European countries before settling here. As someone who had to move a lot and leave everything behind several times in my life, I was forced to learn how to detach and adapt consistently. Consequently, I became an accumulator and a collector of materials and objects, which essentially have no particular inherent value, but appeal to me in some way. I tend to gravitate towards fabrics, inflatables and toys, as well as discarded furniture parts. I am interested in intersections and juxtaposition of preowned goods with shiny novelty items, such as giant beach balls, and what they mean to us in everyday life. I do get attached emotionally, almost viscerally to these and often cannot let go. I recycle and re-use my works consistently until forms either crystallize into shapes I love or I am ready to discard them and travel onwards, hence mirroring migration itself through my practice.

RVS: I wanted to talk again about your video works, and the video Bad Woman in particular. I consider this to be an iconic piece, which has appeared in different forms in various installations and exhibitions over the years. What is the significance of this video in your work, and what does it mean for you to be a “bad woman,” both within this context and cross-culturally?

KG: Bad Woman is one of my greatest hits. The video revolves around a character which I developed in early 2017, in reaction to Trump being elected president. I was going through another visa process at the time and was approaching a decision about eventually applying for a Green Card and living permanently in the U.S and I was anxious. I went to Australia and spent three months in my parents’ house in Melbourne suburbia, where Bad Woman was created. She is a product of my lifelong female rage, a shadow, a fearless clown, an alter ego. She is timeless and inhabits her own reality; a sum of many parts, she is lurking in my subconscious, a Queen of her domain, forever looped in her trauma. The video was made in my parents’ backyard, with reassembled objects and furniture parts, from my past life as a teenager and a young woman, stored in the garage. Set against my auntie’s curtains, she is wearing my mom’s nightie and my grandma’s fake fur coat. I also often perform her live and use her masked persona as a shield, through which I rant about difficult issues. Bad Woman is also an immigrant, an ageless rebel. Culturally, I am a bad woman, who refuses to procreate or get married or even have a partner and lives quite a singular, creative life. A life I have fought hard to achieve.

RVS: Your most recent video, Becoming American, will also become a performance that you will stage on May 1, 2021 at Smack Mellon. For this you are working with a dancer (Lilach Orenstein) and another artist (Sarah Martin-Nuss) who has created a sound piece for this performance. Can you speak more to this process of collaboration and how has your performance practice shifted over the years?

KG: Becoming American is a recent concept that came up as I was going through immigration towards permanent residency within the last two years here. The work is focused on a faceless, nameless protagonist, a new persona who is locked into a perpetual state of becoming or migrating, unable to cross the border. A nauseating concept of constructing a new life and identity, yet again, which never quite reaches it’s form. The character is alienated and in search of place and belonging. In December 2020 I spent a month in isolation at The Potato Farm Project, a residency on Long Island in Jamesport, in collaboration with the EFA (Elizabeth Foundations for the Arts) studio program, where the video was filmed. The live performance will explore the decaying notion of the American Dream, ideas of loneliness and longing, and uncertainty about the future amidst the global pandemic;  in movement, sound, text, voice and dance. I am increasingly interested in collaborating and reaching out to other artists and creative practitioners, in order to broaden the scope of my live practice. I think it is essential for growth and evolution, especially today, as we have all experienced so much social isolation, to open up to new avenues of experimentation and to move forward and beyond my own process and capabilities. So far collaborating with Lilach and Sarah on Becoming American performance has already been quite enriching and eye-opening. I am learning a lot from their input and view of my work, and I am excited about the future opportunities of staging larger collaborative, multimedia works.

RVS: Finally, I want to ask you to speak about this exhibition as a culmination of a long series of works that you have been slowly developing since you moved to the United States. How does this exhibition mark this period of time for you, and what are you hoping to explore from here in your work?

KG: This particular exhibition marks 10 years since I graduated from my MFA and moved to NYC. I have established a particular system of working, initially based on economics and lack of storage and my own formula and material interest in migration, re-use and impermanency. I have reassembled and recycled my works consistently, and have remade them according to spaces concepts. This kind of ephemeral process of making and migrating works from show to show has naturally come full circle for me in FANTASYLAND and coincided with the change in my immigration status. I feel stable for the first time in a decade and unafraid to stand still. I am home and have found the place. I feel I can now stop reassembling and deconstructing everything I create and focus on stabilizing my legacy and securing my future through permanency. I am now interested in materials which can be collected and can outlive my own physical life. I am fully signing up to capitalism, in order to survive in it. When I received my Green Card, after living here for years, there was a “Welcome to America” letter included with it. FANTASYLAND is that “Welcome” message. And now, it begins.

To attend Grokhovsky’s performance (which also feat. dancer Lilach Orenstein and sound by artist Sarah Martin-Nuss) “Becoming American” on May 1st at 4 PM at the gallery,, arrive early, 30 people limit information here. You can also see it on Instagram LIVE. The exhibition FANTASYLAND is open at Smack Mellon through May 2nd 2021. 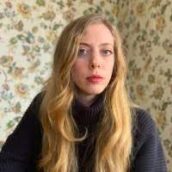 Guest Writer, Cultbytes. Rachel Vera Steinberg is the Curator and Director of Exhibitions at Smack Mellon. She is the co-founder of Blade Study, an online platform launched in 2021 that supports the production of web-based projects by emerging and mid-career artists. Her work focuses on science fiction, cultural distinctions between facts and fictions, as well as the roles of time-based media, alternative art spaces, and artistic agency. She was the 2019-2020 fellow at the Curatorial & Research Residency Program at the Julia Stoschek Collection in Düsseldorf, Germany, where she curated the exhibition JSC ON VIEW: MYTHOLOGISTS (2021). She was the Director of SOHO20 Artists Inc from 2015-2018 and the Assistant Director of NURTUREart Non-Profit Inc from 2010-2015, where she founded exhibition and event-based programs promoting time-based media and gender equity. She was the co-founder of Custom Program (2017-2019), a micro-gallery in Brooklyn that focused on humor, irreverence, and site-specificity. As an independent curator, she has curated exhibitions locally and internationally and spoken at universities throughout the United States. She received her MA at the Center for Curatorial Studies at Bard College, and her BFA from Pratt Institute. l igram l